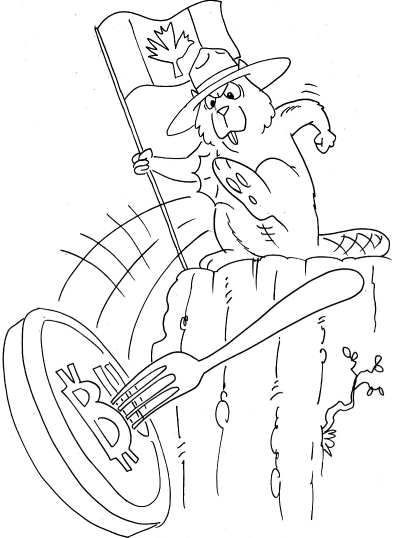 The following statement is published here on behalf of its signatories and was prepared on March 22nd 2017 by Dave Bradley and Francis Pouliot.

We, the undersigned, represent the Canadian users, investors and merchants which interact on a daily basis with the Bitcoin network. We are the frontlines of Bitcoin adoption and act as stewards of the Bitcoin brand in Canada. As Canadian Bitcoin exchanges, brokers, payment processors and service providers we are major economic nodes within one of the world’s most active and developed Bitcoin economies.

As economic nodes representing end-users, providing legitimacy and value to the blockchain, we hereby assert our role as core components in achieving consensus on the rules of the Bitcoin system.

We support the activation of Segregated Witness as an immediate solution to Bitcoin scaling and as a fundamental component of a long-term capacity increases roadmap.

We also believe that industry-wide consensus around a technically sound and conservative blocksize increase could be achieved following the activation of Segregated Witness.

We strongly believe that a hard-fork, as actively considered by Bitcoin Unlimited or Bitcoin Classic, would cause massive disruption in our ability to onboard new Bitcoin users and would create irreparable damage to Bitcoin and to our businesses. We unequivocally oppose the Bitcoin Unlimited network split proposal.

Collectively, we adopt the following principles regarding potential splits of the Bitcoin Network, particularly the network split resulting from activation of the Bitcoin Unlimited hard fork.

We consider Bitcoin Core, the direct descendant of the original Satoshi Bitcoin client, to be the official reference implementation of the Bitcoin protocol and consensus rules.

Any contentious hard fork of the Bitcoin blockchain shall be considered an alternative cryptocurrency (altcoin), regardless of the relative hashing power on the forked chain.

We consider any proposed hard fork to be contentious by default. Any hard fork proposal which is not supported by the near-unanimous consensus of the entire Bitcoin ecosystem, as outlined below, will be treated as contentious.The burden of proof when establishing status of ecosystem’s consensus shall be on the parties proposing the hard fork.

We may, after careful analysis over a sustained period of time, individually or collectively determine that a hard fork proposal is not contentious.

Under a scenario where a hard fork is not contentious, is technically secure and does not fundamentally alter the nature of Bitcoin, we will explicitly state our support for a specific hard fork proposal at our discretion.

We encourage the development and use of alternative implementations of Bitcoin (e.g. bcoin, libbitcoin, bitcore, bitcoin knots) as long as they are compliant with the current consensus rules as defined in the Bitcoin Core reference implementation.

Proposed hard forks that are driven by a reasonably provable industry-wide consensus using the criteria listed below may be supported as the official version of Bitcoin provided that the following security safeguards are guaranteed:

We believe to be part of the ecosystem consensus currently predominantly in favor of the Bitcoin Core capacity increases roadmap. As active participants, we will strive to keep the consensus around the Bitcoin Core project as long as it protects the interests of our users.

In addition to being contentious, this proposed hard fork and software project pose severe risks to users and our businesses, such as:

In addition, we believe Emergent Consensus fundamentally alters the nature of Bitcoin by increasing the responsibilities and powers of the Bitcoin miners, disrupting the existing checks and balances system. This could lead to a gradual and irreversible centralization process in the hands of Bitcoin miners and pool operators, which would compromise core Bitcoin features such as censorship-resistance, privacy and open participation.

Treatment of Bitcoin Unlimited as an altcoin

We will consider any fork of Bitcoin under the current Bitcoin Unlimited proposal to be an altcoin.

We will continue to use the denominations “Bitcoin” and symbols “BTC” and “XBT” as referring to the longest blockchain valid according to the consensus rules of Bitcoin Core, the reference implementation of the Bitcoin protocol.

Under no circumstance will the current Bitcoin Unlimited proposal be considered by the undersigned to be the original Bitcoin cryptocurrency as described in the Satoshi whitepaper and as currently used under the denomination “Bitcoin” in our businesses.

We believe that any knowledge of or interaction with another coin bearing the name Bitcoin would confuse numerous casual everyday users of Bitcoin, particularly those unaware of Bitcoin development processes who are simply looking to make use of the incredible utility of the bitcoin network.

In order to protect the Bitcoin brand, to which our business are inherently associated with, and in accordance to our respective efforts to educate the public and foster clear understanding of what Bitcoin is, in the case of a hard fork:

When assessing the state of consensus, we will require reasonable proof that there is near-unanimous support and technical readiness by:

We may also assess consensus in part using the opinion on and knowledge of hard fork proposals of non full-node-running end users of Bitcoin, as represented by our own users.

We consider that any “neutral” or “absentee” stance on the hard fork is by default in opposition to the hard fork.

We believe that Bitcoin will emerge from this period of contention and controversy stronger than ever.

We remain committed to facilitating the adoption of Bitcoin, providing value and usefulness to our users’ bitcoin holdings and to contributing constructively to the Bitcoin ecosystem.

We encourage economic nodes all around the world to make their stance clear and to assert their role as core components of the global Bitcoin consensus.

We surveyed around 25 Bitcoin economic nodes. None was in favor of the Bitcoin Unlimited proposals. Those that declined either couldn’t commit to our pledge to specifically never list Bitcoin Unlimited or opposed the Sewgit soft-fork because it was already too much of a blocksize increase.

We did not have time to survey numerous Bitcoin businesses, and may add their signatures over time.