Why Build Games for Smart Assistants?

Software developer who created Alexa sleep skill has earned enough money to get a Tesla and start his own company. You can replicate this success too, since major companies open their ecosystems to third-parties. Moreover, it’s a great opportunity to combine the useful with the pleasant, for game skills are the most popular voice skills. You can start with this playground and then step up to the business skills, or you can build up your own gaming empire. Let me show you how it works!

The number of smart speakers, smart displays, smart watches, and other smart devices goes up and up. Smart speaker market is the most rapidly growing sector of consumer electronics ever — it has already outpaced and almost doubled the smartphones market penetration. And despite the fact this market is relatively new, its development is fast and positive. Take a look at these insights:

It follows that the ownership is growing. And once users embrace voice technology, they become more confident of its possibilities and they use it more often:

Conversational technologies are rapidly growing, professional communities are shaping up and successful business cases are popping out. Some major brands already restructure their customer experience strategies while using chatbots and virtual assistants as an acquisition channel. For instance, DKNY recently joined Send Me a Sample campaign – it’s a promotion method where customers can ask voice assistants to send them product samples. Nutella, Coca-Cola and others have already taken advantage of this voice-first interaction and according to their statements, free samples help them grow their advertising sales and gain an edge over Facebook and Google.

While brands pour cash into voice experiences to gain tech-savvy customers’ attention and loyalty, independent developers can get some decent money out of it. Voice not only sells, it can inform, navigate, educate, and entertain. Through the instrumentality of conversational
flow builders you can create some useful and less useful skills for smart
assistants. But most gainful sphere here is games.

It's simple – we love having fun. Entertaining content accustoms us to new interfaces, helps to break down barriers and embrace new technologies. It’s a kind of a training mode for children and adults — games teach us something new, they reinforce our skills, and model the world around us.

Games have always promoted development of the new technology

At the early PC era there were Atari and Commodore. After that – gaming consoles. A bit later first 3D games began the video card productivity race. Surprising, but this very race has enabled us to make such progress in Artificial Intelligence, and Conversational AI specifically. Video cards’ power supply and architecture moved engineers forward to appliance of the convolutional neural networks, resulting in a machine learning breakthrough.

In the beginning of 2000s, paid ringtones gave rise to mobile content, but then mobile games appeared and added fuel to the flame. Games were the first ones to spread over the appstores, and when Facebook launched its targeted advertising, gamedev companies were there to use it long before brands and FMCG. Then smartphones have changed the gaming industry: game developers reconsidered game interfaces and monetization. They’ve created new mechanics and new game genres. As a
result, Angry Birds and Pokemon Go popped out, and the same is happening right now with voice interfaces. 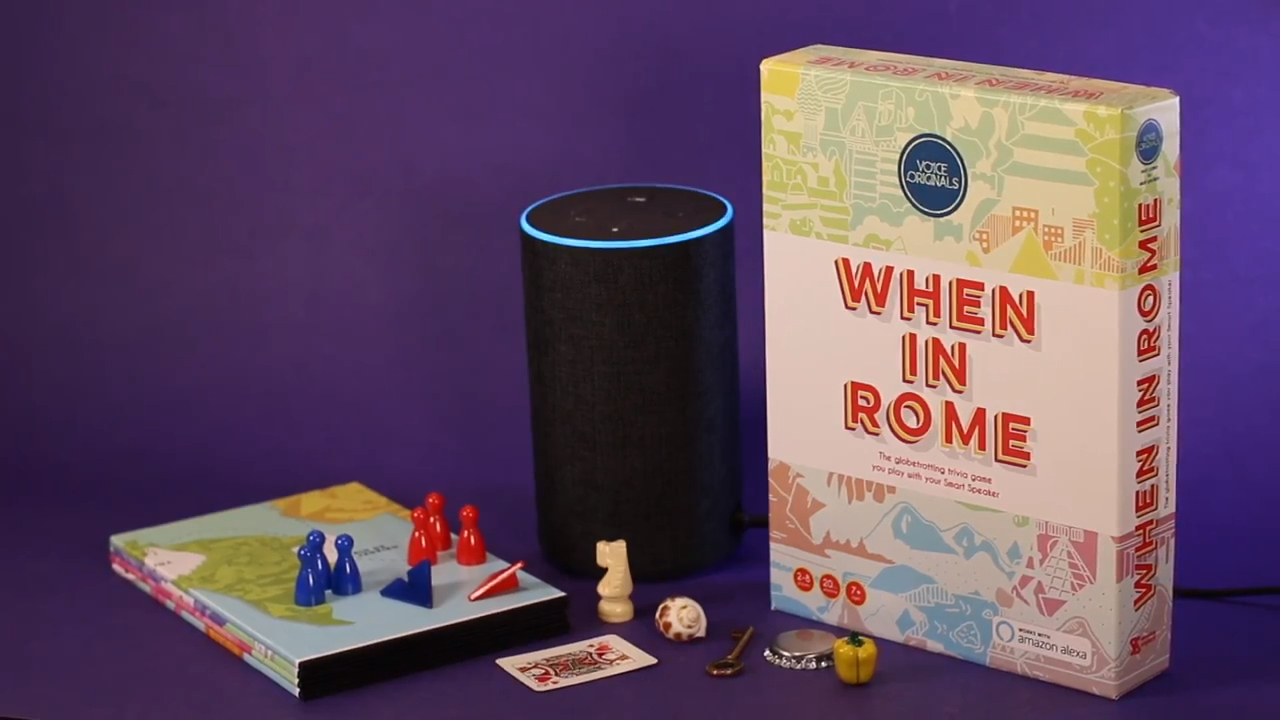 Voice games – is a huge field of opportunities for developers. Good ideas and mechanics matter ultimately in this field. For example, Adobe survey has shown that 63% of smart speaker owners have one in their living room where all the family members spend time with each other. And that’s a great opportunity to build up a whole voice game industry for a group of friends gathered together or for busy parents wondering how to employ their child. Some savvy startups like X2Games and Sensible Object have already grabbed the chance and created a hit combo: they integrated voice control with the most popular hobby — tabletop games. Alexa here enlarges the board game with an interactive experience, it gives instructions and guides players through the game. Taking into consideration a growing demand for tabletop games over recent years, it can be said with confidence that this sector has great financial clout. Just take a look at this AI-enabled Mystery Boardgame.

Among the other game skills, you can find interactive adventure games, where you can build up your own story, character and the world itself. These games are well-designed and sometimes they even vocalized by professional actors. A great example here is a fully immersive Amazon Alexa game that allows fans to navigate Westworld using their voice only.

Games based on a TV show, like Jeopardy! or Guess the price – are the second most popular genre here. There’s a whole bunch of games for a get-together and family parties. You can play song quizzes and traditional entertainment like truth or dare and spin the bottle – but in this case your digital assistant takes on the role of a game guide. Along with that you would find thousands if trivia and knowledge games, word and drinking games, and games for kids, of course.

Since major companies open their ecosystems to third-parties, and software developers build up numerous handy platforms that don’t even require coding skills, creating a game of your own is as easy as pie. These conversational flow builders work on the drag and drop principle: 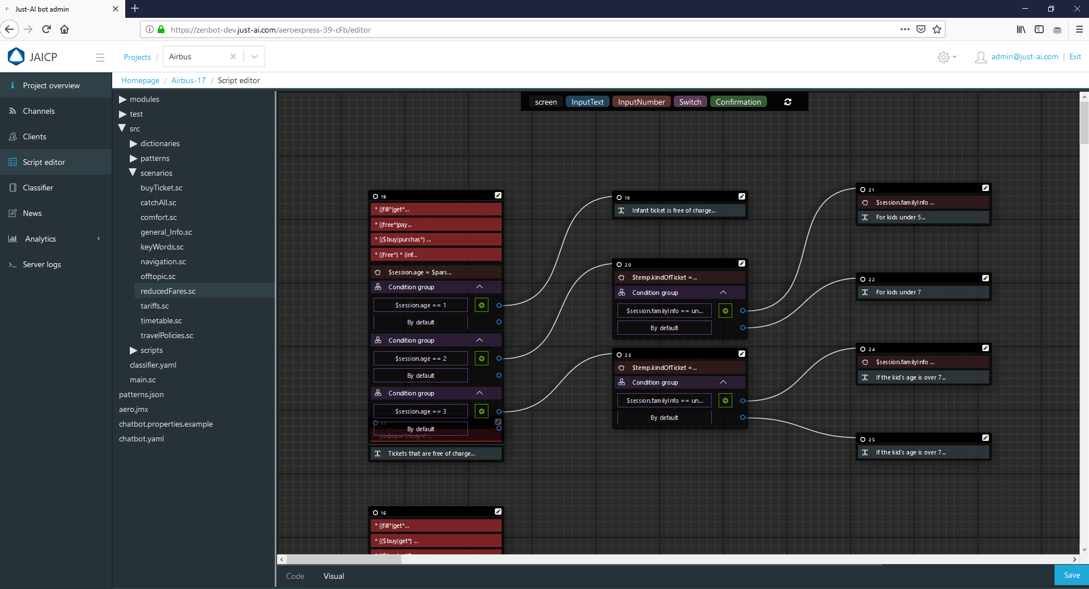 The hardest part is the dialog itself. Or, more accurately, the natural flow of conversation. When outlining a piece of content, you’ve got to think of the next logical line of inquiry or move and begin building out a matrix of additional content that answers users’ questions well in advance. Here are some hints that would help you to build your first AI-powered skill. And remember – if a user gets bad experience at the very start – they would leave. Think through VUI and the storyline itself very carefully. After you have finished with that, all you need is to test and publish your skill. It would appear on Amazon Alexa or Google Assistant sometime after the moderation.

What assistant to pick?

Now there are four primary assistants (we’re not taking into account rapidly growing Chinese and Russian VA market yet), but Amazon Alexa and Google Assistant should be considered in the first place. Both are making progress and very unlikely would be stiffed by competitors in the near future. These assistants have different approaches to development, but both provide built-in skill types and a template-style approach for building skills: you can use Alexa’s Blueprints or Google’s Templates – these are online tools that enable users to build up skills in minutes. Or you can use one of the conversational flow builders, that we’ve mentioned before. Both companies provide a wide range of tutorials, webinars, and training courses – there’s sufficient information to begin with and to help with more complicated topics. Besides, every conversational builder has its own tutorials and special opportunities, sounds and features, built-in user’s intents and creative content.

Alexa may be found nearly everywhere: Amazon and other manufacturers’ smart speakers, smartphones, other smart devices, and even platform Alexa for Business, which enables companies to integrate Alexa
into a smart office. Alexa’s skill number is growing exponentially, and this
assistant in the most capable so far. Amazon Pay is used for in-skill purchasing (ISP), but the best part here is that Amazon Skill Store marks out paid skills on its main page with the Premium Skills category. Besides, Amazon brings in engagement with premium content on a subscription basis, while offering to developers beneficial conditions for partnership. Developers charge an in-skill price and get 70% of the revenue. Users can make a purchase inside the skill using their voice only (confirmation/refusal in a yes/no form). The process is simple and smooth, it doesn’t distract user from skill doings.

To promote ISP inside its ecosystem Amazon brings in key vendors and top skill developers to networking and informational support. For instance, developer Gal Shenar added in-app purchase for his premium content in games Escape the Room and Escape the Airplane. He said that users are paying willingly for extra features and later reported a 34% conversion rate for Escape the Airplane skill and 8% – for Escape the Room game. In this case developer presents the premium experience as an option — not a hard selling. And this makes his skills engaging and habit-forming.

Taking into account all the possibilities Google has – accessibility of a search engine and its users’ personal data – Google Assistant was supposed to lead the smart assistants’ race from the very start. But the company dawdled on its ecosystem opening and as a result Amazon
gained the upper hand and recommended oneself as the best voice assistant in the minds of consumers. But despite this fact, Google has a massive advantage for enabling content consumption due to the seamless integration possible between assistant, search, and device.

Besides, discoverability issue is solved well here – this function draws upon Google algorithms to find the action or to redefine user’s inquiry. Assistant resorts to the search in case it doesn’t get user’s intent or can’t handle the query. Therefore, even if a user doesn’t say invocation phrase, or in case needed action is brand new, Assistant still would get the correct answer or find the action. As a result, Assistant won’t ask user same question several times, and they won’t get mad at it.

We got to admit, open ecosystem and the ways Amazon brings developers to it did their part – Alexa has thousands of devoted fans willing to invest their time and money in its evolvement. Google upgrades Assistant under one’s own power, they fill in the Knowledge Base so that smart assistant could answer questions in a better way.

Google Assistant is quite advanced – it has digital transactions and monetization methods. Moreover, the company explores opportunities for integration with other apps, services and platforms (e.g., Android). This is a good strategy, for, that’s a given, that Pixel and Chrome OS connect better to Google Home rather than to Amazon Echo. Besides, it’s pre-installed on millions of smartphones, which means users have already grown accustomed to it. And the actions built up for Assistant may be deployed on Android apps too – this would enable users to make purchases through the platform they prefer.

Play and get paid

It’s hard to tell for sure which way voice games would evolve. Interactive dramas, voice quests and voice-enabled boardgames appear, while quizzes get more and more complicated. Most probably, when microphone arrays are integrated with TVs and consoles, smart displays and other conversational AI specialties would open new avenues for traditional
games.

This is a huge market open to experiments – everyone can contribute to the development of voice experiences. And the larger enthusiastic audience is, the faster and better the technology will progress.

Developers are faced with many issues – what mechanics to choose? How to get the traffic? Which monetisation methods to apply? How to remind of your skill to the gone user?

But this is a place to create something new and really cool. This is the time to invent a new genre and to realise your own success story. Good luck!