Behind the Scenes of Codacy’s Slick New Workflow 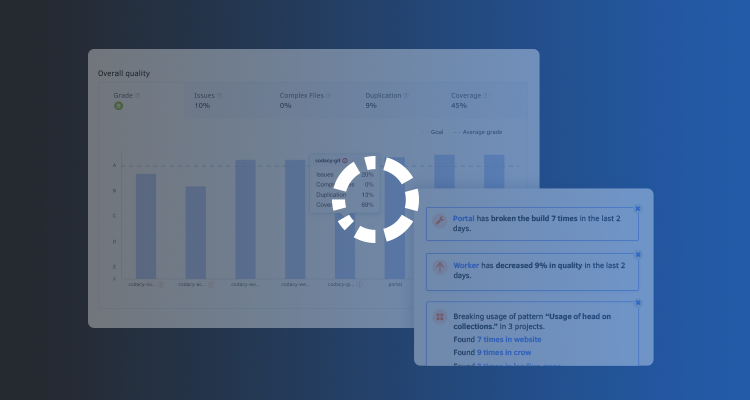 If you’ve been using Codacy for some time, you’re going to be excited to know that a new release is in the works. The changes in store include a range of improvements to the existing functionality, along with a range of new features.

In this post, I’m going to take you through a number of the key changes and show you how they’re going to make your life both simpler and less time-intense when managing the quality of your code with Codacy.

We’ll start off with the new additions. Because, after all, who doesn’t like new, shiny features? Then we’ll finish up by looking at the improvements to existing functionality.

One quick thing before we dive on in, though. If you’re a long time Codacy user, please don’t think that this update will require you to relearn what you already know. It doesn’t.

While the new release does add new functionality and both improve and better organize existing functionality, you should be right at home with what you’ll see. In fact, it should not take you very long at all to settle into them, before you appreciate the benefits.

Okay, let’s start off by looking at the new additions to the Codacy UI. These changes offer the following advantages:

The first addition is the “Organisation Dashboard” which, as the name implies, displays project information based on the collaboration of one or more teams. This dashboard is composed of several sections, of which we’re going to look at three. These are:

Next, let’s look at Hotspots. Hotspots are notifications about critical areas of interest, ranging in severity from general interest to items needing urgent attention, such as security.
The type of notifications you can expect to receive in the Hotspots are the following:

Arguably one of the most critical areas of project analysis, “Open Pull Requests” has gotten a significant refresh. You can see that there are now two tabs:

Singling out “Last updated“, you can quickly see a series of information about the listed pull requests. This includes:

Having the information displayed in this way, while visually appealing, also makes it easy to stay abreast of the health of a range of PRs (currently a maximum of 5).

Now let’s look at logs. Perhaps not as important as Hotspots or Open Pull Requests, Logs are still important nonetheless. This is because they help you to stay abreast of the activity within your project at a glance.

Like most other logging systems, the Logs panel lets you see a range of project activity directly caused by team members as well as system activity. The image below shows an excellent example of this.

This provides a high-level analysis of what’s going on in a project.

Next up, is the personal dashboard. This dashboard is a personal view of all the projects that matter to you in the organisation, listing all the created pull requests.

Similar to the team dashboard, this new dashboard is composed of three sections: Starred projects, Pull requests, and Hotspots. Of these three, we’ve already covered Pull Requests and Hotspots. So let’s dive into the new one Starred Projects.

As the name implies, this section contains a quick overview of projects that you’ve starred for a range of reasons. These could include projects with high priority, ones that are long-running or have another form of particular significance.

This widget shows three, yet provides a handy link to a complete list of all starred projects. Within each of the three displayed project summaries, you can see the essential information that you already have on hand in the project dashboard, which includes the project’s grade, Issues, Complex Files, Duplication, and Coverage.

Now that we’ve looked at two new additions let’s now look at a number of the improvements in the Codacy UI, starting off with the Project Dashboard.

Finally, let’s look at how Issues Breakdown and Coverage have changed. The information is presented in a more transparent and more succinct way.

What’s more, by taking the approach that they have, Codacy’s able to pack in a range of further details, such as total lines of code.

In the existing iteration, by focusing purely on the numbers alone, you only know what’s happening at a given moment in time. By using Quality Evolution chart, you see a trend, which is much more empowering.

So, in summary, the new workflow that Codacy has just released, brings a wealth of new features, along with a range of improvements to existing functionality.

All these changes have been designed to make your life far easier than it has been to date, to allow you to spend less time and to work more efficiently with your projects than ever before.

I hope that you see the potential that these changes offer. That said, whether you’re for them or have reservations, please share your thoughts in the comments. I know the team would love your input.

Related Stories
Subject Matter
Win $1000 by building a web app on Velo by Wix by @Wix
#promoted
Building Technology that Augments Human Abilities with Amber Case by @hackernoon
#design
Refactor Or Not To Refactor? by @doublex
#refactor
5 Examples of AR and VR Use Cases in Our Everyday Lives by @skywellsoftware
#augmented-reality
C# Sorting - A Minor Error by @davidebellone
#csharp
Java Vs. PHP: What To Choose In 2021 by @omelnic
#php
Getting Your First Job As A Junior Developer: The Psychological Perspective by @shohamgilad
#hiring