It's easy to fall into the trap of seeing the crypto space within a mechanical framework. After all, Bitcoin and blockchain is just an amalgam of code, maintained on a decentralized network, and supported through a literal army of machines permeating across the globe. The architecture and design of crypto and blockchain matter a lot. However, it is easy to get lost in the engineering of this nascent technology and lose out on the bigger picture of actual utility and function. It doesn't matter if this peer to peer cash system is seen as a currency by some or as a store of value by others, one thing is evident: people buy, sell, and use Bitcoin for different reasons.

As the cryptocurrency ecosystem continues to mature, more and more players in the traditional finance space have latched on. With Wall Street execs observing and commenting and even bankers, researchers, analysts, and economists making their presence known, imparting their thoughts and speculation, nearly everyone has an opinion on digital currencies. They have their own perspectives, and those perspectives are much older, built upon decades of our time’s best economic minds, like Friedman, Hayek and Keynes. After all, money has existed far longer than the digital currency boom of 2009 and will continue to exist long after. That means, like good cryptography, these ideas have withstood the test of time, and as a result, we should carry the weight of their expertise with us when re-envisioning our economic ecosystem

In crypto circles, the current breakdown of cryptocurrencies is structured mechanically. In the case of stablecoins, they fall  into three neat categories which will help us understand their functions better:

However, these 3 mechanical classifications only tell you part of the narrative, and from an investment standpoint, a very small and potentially unremarkable part. For example, knowing that TrueUSD or Tether simply collateralizes fiat (US Dollars) and puts dollars on the blockchain doesn’t tell you very much as an investor. The mechanical component really leaves something to be desired when you want to know how a market might receive a coin, let alone behave once it’s released into that market.

A look at Tether ($USDT) showcases this. Tether recently had a period of heavily negative news. The news was inescapable and it focused on the fact that Tether was not being fully backed by US Dollars (USD). Mechanically, Tether stated that every 1 USDT would be backed by 1 USD. But when it was revealed that this 1:1 backing was not true, what happened? The price of Tether stayed the same. Why? Let’s look at what users care about when using Tether:

They could buy at $1

They could sell at $1

They had confidence they could do this whenever they wanted

In short, what makes Tether useful for investors is not whether it’s actually, mechanically backed 1:1 with the dollar. What matters is liquidity. This is behavioral and it’s how the coin behaves that caused it to retain its usefulness and therefore value.

Let’s key in on that word: Behave. It just so happens that a very valuable framework stems from how things behave. Instead of using a mechanical filter, what would happen if we used a behavioral classification. How would it be received if we put coins into behavioral buckets instead of mechanical ones? Let’s apply a few ideas and see how new buckets might provide us with additional, important information.

Inside vs. Outside Money 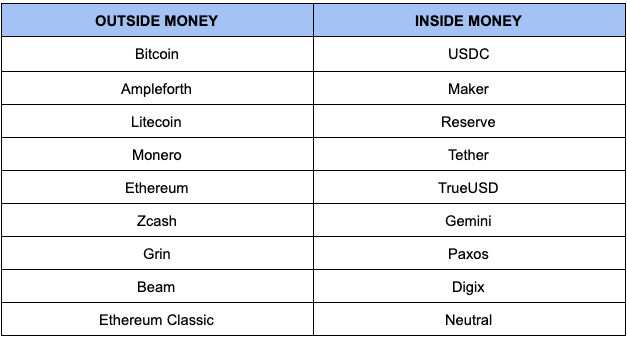 Another view which can shed light on the behavioral side of things surrounds rules vs. discretion, with advantages and disadvantages to each approach. To outline some potential disadvantages, discretionary policies have the vulnerability to have subjective applications, which can introduce errors in terms of subjective timing, scope and participation. Discretion in the traditional finance world is often regulated to give protection to consumers. An example of this could be transparency about how an interest rate can change and by how much. In the decentralized world with no strong authorities, there's no guaranteed regulation except for rules-based code. However, rules-based policies can have the potential disadvantage of being too rigid, not allowing for unique action in times of full blown crisis.

The important take-away in either event is to understand what type of digital asset you are dealing with, which will provide you with an indication of how the asset might perform in a given scenario. As an investor, you may achieve a  more predictable performance out of a rules-based digital asset than a discretion-based digital asset.

Maker DAO is in the news as a result of their discretionary policy. According to a Coindesk report borrowers are unhappy with exponentially increasing stability fees (basically, interest rates) in extremely short time frames. These stability fees are set via a vote, and the people casting votes are arbitrarily doing so based on their own discretion. They have passed rates that are 40X higher than they were mere months ago in order to prevent a negative outcome for their token. However, the outcome is increasingly negative despite their best efforts. The uncertainty surrounding how the chosen few will vote only adds to the problem.

This information is  - necessary - for an investor to know.

It becomes increasingly important to know how digital assets behave. Be sure to understand if a digital asset is rules-based or discretionary if you want a full picture of that digital asset.

Tying It All Together: A More Complete Picture

Having a complete awareness and knowledge of asset classification and behavior provides a more useful, fuller picture of a digital asset.

Framing a digital asset under the lens of behavior and mechanics helps guide one to ask better questions to determine if the digital asset is the right one to invest in. For example, with the right behavioral lense, you can better understand the impact of how coins enter or leave the system. You have an idea of what to ask- are new coins entering through minting/selling? Buy-back and burn? Collateralized Debt Position (CDP)? If it’s through CDP we can apply another lens to determine another question we need answered- If it is CDP how is demand for CDP and stablecoin balanced?

Additionally, taking into account behavioral characteristics helps you to question other important ideas, such as what assumptions about the underlying economy does the protocol of a digital asset rely on? For example, if a project relies on bonds, there must be a long-term underlying growth for that bond market to make sense. Other questions will arise as well, such as what information is propagated into supply, if any? If that’s not the case, is supply scheduled deterministically? If it is scheduled deterministically, what might that mean for the future of the digital asset? Mechanically, that answer is simple - you know for example that Bitcoin will only have 21 million coins ever. Behaviorally, how will a fixed supply affect the price and performance of that digital asset? Clearly, the behavioral characteristics of a digital asset are important to consider.

Hopefully this has provided you with a few new ideas and additional lenses with which to view digital assets. Knowledge and information are powerful, so I hope this additional framework helps you in the future while evaluating digital assets.

Disclosure/about the author: Simon is a cryptocurrency advocate and head of growth for Ampleforth AMPL

The Chain of Events Through The Ages that Lead to the Birth and Ado...

Inbox zero is a lie you tell yourself 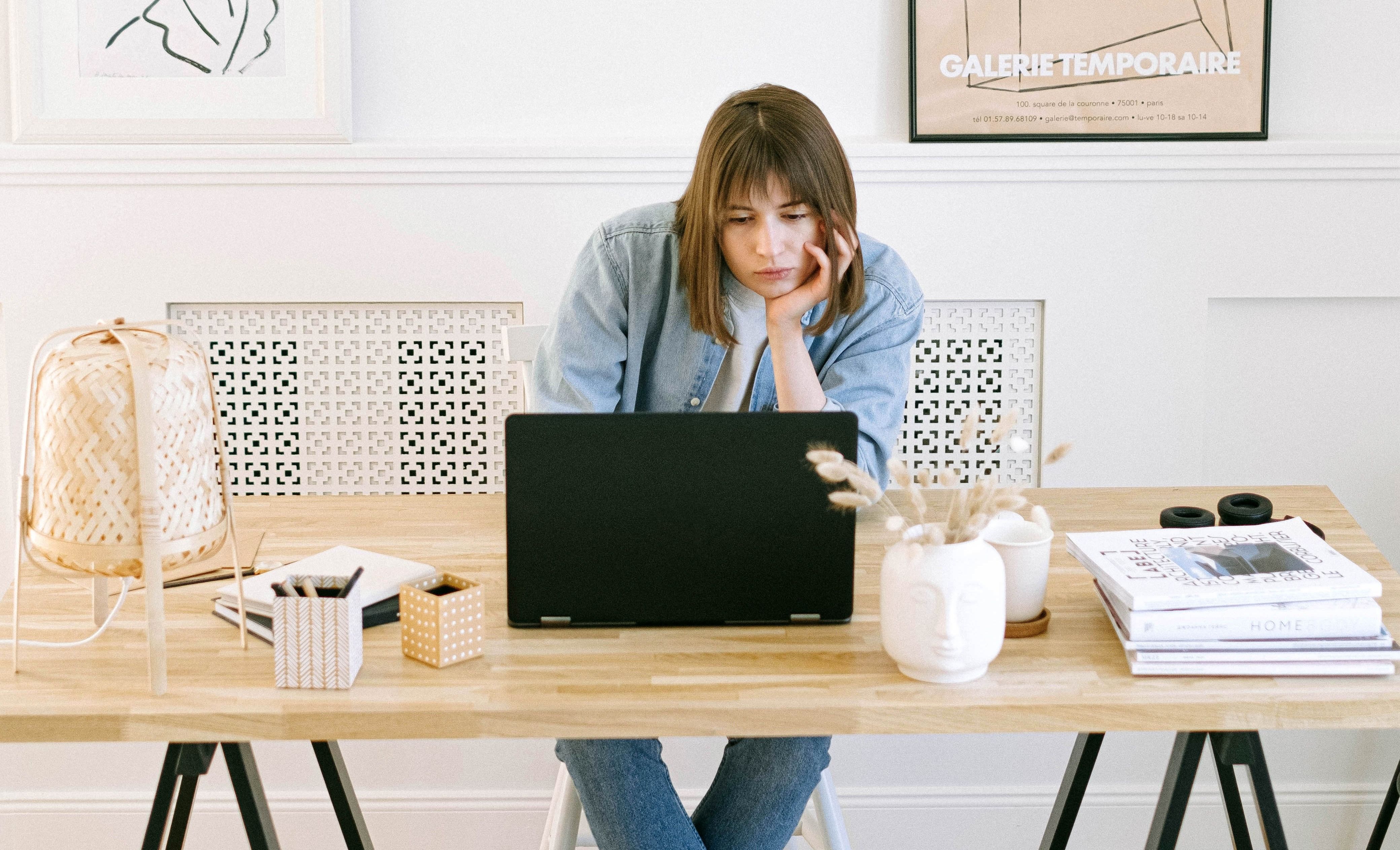