Am I Missing Something With Mattermark? 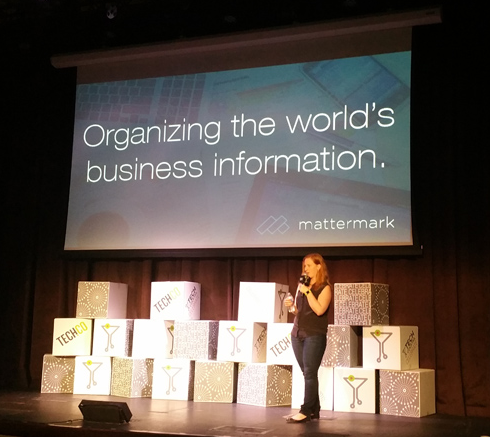 Mattermark promises something very special: to organize the world’s information by building the Bloomberg for startups.

And I’m totally sold on that promise. Imagine if a piece of software could really identify a startup’s growth potential or real-world momentum(!) and provide you with everything you need to know to make an investment, hiring or sales decision in one place.

Brad Feld, Boulder’s preeminent venture capitalist, invested and is very bullish on the company, which raised more than $10M.

And CEO Danielle Morrill totally floored me with this quote at a recent conference in Las Vegas:

So I’m all in on Mattermark.

And before I dive a bit deeper into my experiences with the tool let me state that I really understand that the problem is extremely difficult to tackle and that I know that the company has a very long-term vision. It’s all good. No haters here.

Having said that I do believe that if Mattermark’s selling something there has to be an MSP (minimum sellable product) and I just don’t see it.

I was always curious where they go their information and how good it was. I do due diligence for early-stage startup investors and we’re doing this:

so I wanted Mattermark to have great information because that would be of benefit to everybody out there and would most certainly make my life a lot easier.

So a couple of days ago I got a trial subscription to Mattermark and started checking on some of the companies I know to see if I could source some decent data. Most of the companies I took a look at are early but those are the ones that are hard to gather good intelligence on. It’s easy to get a good read on a company like Buffer but early stage is where it gets interesting. There were 73,400 entrepreneurial ventures funded last year and with the proliferation of non-accredited investors and everyday investors coming into the marketplace as a result of Title III of the JOBS Act, early stage investors need all the information they can get.

Again — and I can’t stress this enough — I understand that Mattermark is early and the team is passionate and the problem is really, really hard to tackle and all of that. But if you’re charging $500 a month I expect that this is something serious. Keep in mind that the company isn’t saying it’s just giving you a tool to play around with but doesn’t believe in the quality of its data. It doesn’t show me that when I look at Buffer’s profile the chance that it’s right is 99% and when I look at an earlier-stage company the data might be only 70% reliable.

Before I get into what I’ve found this is my big ask:

Am I not getting Mattermark? Am I using it wrong? Is everybody else thrilled and I just don’t get it? Or do you just believe what you read without being really inquisitive like that making a million dollars will make you happy (it doesn’t I can tell you for a fact) or that a $100 dollar bottle of wine is better than a $10 bottle (answer: rarely).

Roost is a 500 Startups Batch 12 company that is building the AirBnB for self-storage. Roost has raised just under $2M and was established in 2014.

A lot of the information on Mattermark doesn’t match up for the company. For example, while the year it was founded is true, look at the Last Funded box. How can a company founded a year ago have taken funding 7 years ago?

So what happened here?

The CEO confirmed this to be true. Techcrunch/Crunchbase got it wrong too, mixing up the two companies (see the article on the left and the company profile on the right).

But this is no excuse and it’s easy to fix this.

Contractor Insights is a company I was a part of for a short while that was registered in Delaware as a C-Corp and then registered as a foreign entity in the state of Colorado) in March 2015 .

The company exists and is actually launching a product soon but it does not exist in Mattermark. No record.

The startup is in the process of redoing its landing page so I know it’s live and moving forward and does have a founder and possibly outside financing. It most certainly exists and even has a LinkedIn company page:

Intelclinic brought the Neuroon sleep mask to market through it’s very successful Kickstarter campaign (beat its goal by a factor of more than 4). Neuroon is the product and Intelclinic is the company — pretty straightforward.

Mattermark lists both records and gives a funding number for Intelclinic and not one for Neuroon (which makes perfect sense).

But besides raising $439k on Kickstarter, the company also raised a tiny starter round earlier. Mattermark makes no mention of that although it does pull information from Crunchbase, which does contain information on the round.

According to the CEO the employee numbers and the uniques also don’t add up. The company also garnered serious press attention from the likes of:

but Mattermark only mentions one article from 2014

Brand24 does social media monitoring and analytics for the likes of IKEA, H&M, AirFrance, Intel and many others.

Mattermark lists the company’s two websites (one in Polish and one in English) as two different companies. But there’s only one business (just like it has one website for Apple and not the hundreds Apple has registered).

In both records Mattermark shows 24 employees:

When I asked the CEO how many people work for Brand24 late Friday night he responded:

It’s also pretty clear that the company was established in 2010 (but registered as TDB in 2011 according to its business registration documents) but the U.S. entity was probably registered much later. Mattermark makes no mention of that distinction.

And the company has taken outside funding, although Mattermark says it received no outside funding. The startup was actually sold (50.49%) to a strategic partner in 2012.

Makeena is a local Boulder, CO company in the consumer app space that is currently raising money.

but go to Crunchbase and you’ll see information saying that it’s raised more (which is not necessarily reliable).

I know for a fact that the company has raised even more than the $176,460 but the $76k is what Mattermark is reporting.

You can also see that the company doesn’t have it’s year Founded filled out but there are signals out there like this:

and of course on AngelList where they list their founding in 2013.

Fido Labs is an exciting company in Silicon Valley that promises breakthroughs in machine learning and deep data processing. There is one Fido Labs and they’ve got a couple domain names and sub-domains for various projects and products, but it’s one business.

and says the company never raised

although I know it has and that has been published here:

These are serious people doing serious things with data and moving forward and you can’t see any of that looking at Mattermark.

Spray is a company that offers a proximity-based messaging service. The startup has raised money from the likes of Mitch Lowe (co-founder of Netflix) and has a couple hundred thousand dollars in funding.

The company has 20 employees according to CEO Kamil Kuchta (November 12, 2015). Mattermark lists 13.

Mattermark reports is hasn’t raised anything and again it does show duplicates because the company has two domain networks registered (www.spraynetworks.com and getspray.com).

So there you have it. 7 companies that I know and would like to analyze and the information I can see on Mattermark is neither credible nor reliable for all 7. All 7 are registered entities. All are live. All have U.S. operations.

You can’t make any business decisions based on this information. I understand the vision and I know the intent is pure, but I just don’t see any value crunching bad data to give a Growth Score or a Momentum Score or any other indicator based on information that has nothing to do with reality.

So while I’d love to believe that what I’m seeing here (a list of Boulder, CO’s fastest growing companies) is real the truth is that I have no idea if any of this is credible. Of course Crunchbase, Angel List and others are also way off base often but if the information out there contradicts each other than that should warrant a closer look, especially since they claim to have thousands of data sources they rely on.

So what are we seeing? I’m not really sure yet but I’m trying to understand the problem.

Right now it’s just like with cooking: You have to start with good ingredients because you really can’t do anything decent with crap even if you dress it up nicely like this:

Am I doing something wrong? Is there a caveat somewhere that says that this is just a toy to play around with or because I have a free trial I get the bad data or is something else going on? To tell you the truth all of that would be fine. Mattermark is attacking a huge problem and nobody expects everything to be perfect from the get-go. But if you’re taking serious money from serious folks in exchange for a serious promise things need to add up.

I know that Mattermark has a process in place to update data quality and of course this is useful but serious mistakes in 7 records in a row is not a reportable problem, it’s a systemic or even a structural one.

And I know that the company’s very transparent about it’s efforts to collect the information out there.

And like I wrote in the beginning: The product doesn’t need to be perfect. But it does need to be real.

I’d love your feedback and frankly I’d love to be told that I’m wrong or that I’m not understanding something. I’m even prepared to take down this post if I’m just clueless and I’m doing it wrong.

But my gut is telling me that there’s a lot more to this than meets the eye.

Jakub Kostecki is founder and CEO of StartupFactCheck.com, which performs due diligence and analysis on early stage investments for the world’s best startup investors.

If you’ve found this article to be useful please hit RECOMMEND and SHARE it with your community so I can collect more information about the credibility of information out there on Mattermark.