[A Response] to the Citron Research Report on Nanox

After, Nanox had IPO’d at $18 a share, and a $20.34 open, it has essentially became an IPO darling. Nanox reached as high as nearly $67 a share in a matter of weeks to dramatically dropping towards $28.

Prior to the most major drops, Citron research claimed Nanox a farce, Theranos 2.0, and put a price target at $0. A publication known as Empirical Research also sided with them later on.

Citron have in the past shortened 51 out of the S & P 500 companies and been short on Tesla, Nvdia, Shopify, Ubiquiti Networks, Facebook, Peloton, Inovio Pharmaceuticals, Inc., Hubspot, among others. They are a known activist short selling firm founded by Andrew Left, who has been investigated by the National Futures Association (NFA).

Claim #1: No Proof of Scans

The Citron report cites that Nanox haven’t shown any proof of scans performed by their machine. This claim seems to be false.

Claim #2 Only Mockup Drawings/ No R&D

The Citron report’s next claim is that their seems to be only mockups of the Nanox device or just drawings. 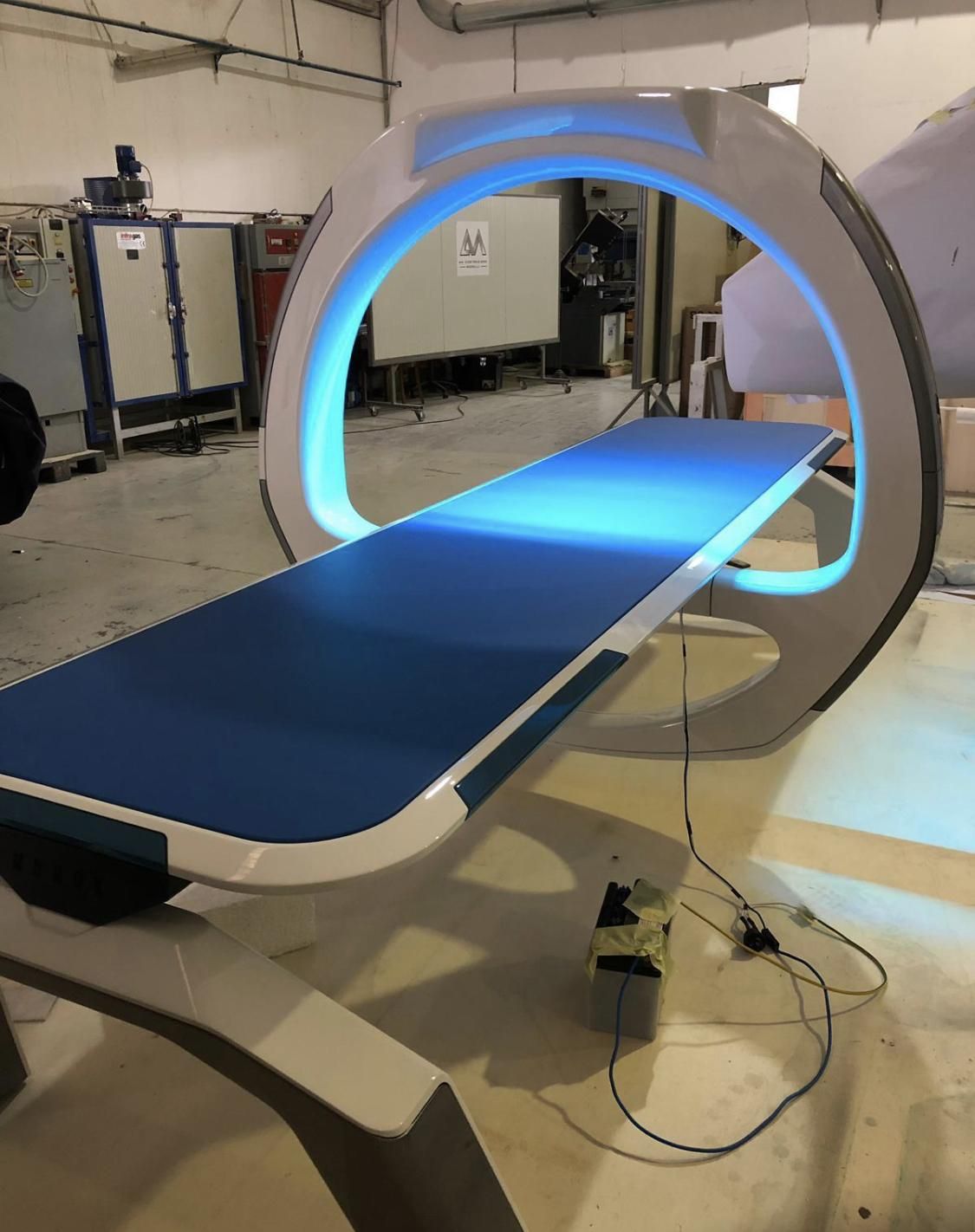 Now it does seem that the Nanox website doesn’t have too many
demonstrations in relation to their prototype. Perhaps a media gallery would help. However, looking at some of their old posts or doing a bit more research online, it looks like you will find information that
alludes to more than just drawings or mockups.

They said, Nanox imaging would need many years of R & D to tackle the medical imaging market. It looks like people made the association based off where the company was at in 2018, that not much R&D was done. However, an important thing to note is that according to their Crunchbase, the company has a founding date of 2012. This gives them plenty of time for R&D, prototyping, and other aspects of research.

This claim isn’t necessarily fully false but it is misleading. Now assuming that the metrics on Citron’s report for R & D is right (given the report doesn’t have many sources), they are stating that Nanox had only a $7.5 million R & D budget and are comparing it to GE Healthcare’s R&D budget. Now the assumption is how can a company like GE spend $1 billion dollars and not have what Nanox has? This is a strawman argument. GE Health doesn’t just work on medical imaging and mobile diagnostics, they also create AI platforms, software, IT and security, data monitoring, etc. GE is an industrial conglomerate, while Nanox is starting phase one with focusing on medical imaging.

Startups are able to also stretch R & D budgets quite well. Sensory tech isn’t too expensive of a market to get into, especially with contract manufacturing or access to research and fabrication labs. Some institutions has graduate and PhD students building highly advanced prototypes of sensory technology with $50k grants. It isn’t that far fetched to think a company can build a manufacturing ready device with just a $7.5 million budget. Keep in mind the servos and motors moving the scanning device and all other parts of Nanox’s X-ray machine doesn’t matter as much in comparison to the sensors and medical imaging techniques.

The fifth claim is that they have a small R & D lab and then take a
screenshot of what looks to be a really tiny space. The photo taken is actually a screenshot of a clean room from the University of Tokyo. It was related to a small part of the manufacturing process in experimentation related to the MEMs X-Ray Chip. This information was already available in Nanox’s SEC filings, and isn’t their entire R & D lab. The University of Tokyo is also one of the top and most respected research universities in the world.

The other claim they go on to make is that the FDA 501(K) approval is small and/or not that relevant. They also cited that the FDA approved 85% of all medical device approvals for 501(K) and that Nanox can’t get the most simplest of approvals yet. The article that Citron did manage to cite on their report was actually for a 2015 FDA performance report and that approval rate was at a 15-Year high. Citron then makes it seem like that Nanox is struggling to get this easy approval when in reality the timeline haven’t even been that long yet for the medical device approval pipeline. They have up to 180 calendar days from the deficiency letter (if received in March) to respond to the FDA and likely it will take longer then that for approval. A 12 to 14 month timeline for a highly theoretical technology from the original submission wouldn’t be bad. One also needs to consider that if Nanox received a deficiency letter many month ago from the FDA, this doesn’t mean the device is bad. This usually could just mean they want more data. This is also likely why Nanox is trying to garnish data from the Hadassah hospital or other means.

Giving Citron the benefit of the doubt, let us sit and act as if the company’s assets were valued at $6.1 Million in 2018. You have to keep in mind more and more startups are going public in 3 to 5 years instead of over 5 years. 2018 could have been their accelerated development phase in where they tried taking years of research and making them commercially applicable. The ability to reach even a small milestone in few month can make some startups valuations increase by twelve fold. Comparing an independent report, Series A, B, or even C and D valuations with a public company’s valuations isn’t how these type of things work. Venture capital valuations greatly grow at an accelerated pace over time and this is highly misleading. The Series A and Series B data for the venture capital rounds also show high investor confidence for accelerated growth.

One of the more major claims that Citron is making is that the partnerships and commercial agreements that Nanox has are essentially worthless. Outside of saying they have no unique or working technology (which I attempted to refute in claims 1, 2 and 3, they also state that because of FDA approvals the agreements are so far worthless. Outside of the fact that we are still giving Nanox time for the FDA approvals, one must need to consider all the partnerships that Citron is pointing out as fake aren’t even in US territories. One also needs to keep in mind that legally binding letters of intent, commercial, distribution, and any form of contractual agreement warranting sales isn’t fake. It isn’t as if someone can go online and insert their email and type how many machines they want. These type of commercial agreements that warrant sales and distribution usually can take weeks if not many month of due diligence.

Claim #9: The Companies that are Costumers of Nanox are Fake

One of the claims is that since the Gateway group doesn’t directly mention medical device as a market sector or segment, it is a reason to draw skepticism. However, the Gateway group has commercial electronics as a market segment and that can mean a variety of things. Gateway also seems to have a large commercial space. Another claim they have in regards to the Golden Vine International Company, just seems to show a side street view of the scooters around where the place is at. I don’t care where so and so is located, or if they ride scooters to work at their country, or if the office doesn’t look like Manhattan. Customers are costumers, and I don’t feel like this is a hard hitting rebuttal. They also claim that LATAM is Brazilian, but has only 3 employees in Israel. More than likely they could have outsourced 3 employees in Israel to do due diligence on Nanox, or just have multiple small offices. I seen many big companies in the past, including even LinkedIn have small WeWork offices where people will do IT work. Also, this is a claim related to a Nanox costumer. I’m not sure why this is a hard hitting deal.

Citron goes on to claim that they will make a part #2 that will also raise questions in regards to the credibility of Nanox’s management. I suggest you go visit Nanox’s website for yourself and do a background search on the leadership team and their board of advisors. I personally don’t have a problem with what I am seeing.

After the report was released, the RSI have went down all the way to 24.15. A RSI of under 30 indicates oversold, and a RSI over 70 indicates overbought. Many law firms are also citing the Citron report stating they are launching an investigation, which doesn’t concern me too much given the details of the report. After the report was released, sentiment in relation to Nanox have been largely negative due to people thinking that not even a prototype exists. Many investment banks and analyst are still quite bullish, and some people are hoping for a bullish breakout pattern once rebuttals come out of the report.

Accelerating Innovation and Adoption of Applications

Nanox Signs Agreement With Hadassah Medical Organization for the Development of Novel Early-detection Protocols for the Nanox.ARC

This article was originally transcribed and submitted for publication on Thursday 8:10pm September 17th. We decided to publish this now few days later instead of waiting given the urgency of the subject.

I do engage in research related to the sensory tech and medical device industry. However, I hold no relations to Nanox Imaging or working with Nanox Imaging. My only current conflict of interest is being long on its stock.

Related Stories
Subject Matter
Contact us for Digital Product Development by @AWH
#promoted
My Open Letter to Jack Dorsey and Everybody on Twitter by @TheLoneroFoundation
#twitter
What Are Progressive Web Apps? by @anand-mahajan
#progressive-web-apps
How I Used Blitz JS To Take My Pet Project Into Production by @codechem
#mvp
The Rise of Femtech: Menstruation, Fertility, and Sex — Oh My! by @itrex
#startups
A Brief Introduction Into A Typical Data Science Project Life Cycle by @abseejp
#data-science
The Liquidity Crisis - Part One: BTC by @benlilly
#bitcoin