Why use Node.js as your backend? 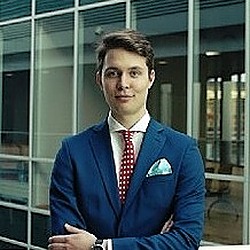 Do you have an innovative idea that’s going to turn your web app into the next big thing? That’s great - but remember that software development is a process that has to be well-thought-out, and the most critical decision of what backend environment are you going to choose has to be made at the early beginning.
If the project is going to be complex, several aspects will influence it - including many different data sources that are dynamically delivered to server applications and numerous sources of data consumption. So we’re not talking about the classic legacy web applications that have been often built a few years ago anymore. Clients often need apps that use a web application (and often two or three, because there are also admin panels, landing pages, etc.) as a 'front-end' and mobile applications on several platforms (or several applications).
In such cases, it makes lots of sense to separate endpoints and services responsible for providing data (and its aggregation, mapping, etc.) from business logic and processing.

Node.js - a modern approach that wins the lion’s share of the market

Similarly, when data comes not only from user activities (‘front-end’ - web and mobile applications) but also, for example, CSV files or data streams from external APIs, such as cash registers or IoT devices, it’s tempting to divide these processes into separate modules or applications. This approach is close to creating projects based on the microservice architecture, and Node.js ecosystem is closer to that than any other web technologies we know.
Node.js, due to its asynchronous, non-blocking I/O (input/output processing) and its event-driven nature, is a good choice for building modern solutions based on micro-services, event queues, jobs, and WebSockets. It’s a relatively young runtime environment which has both pros and cons - on the one hand, its libraries and patterns are less mature and stable, on the other hand, its approach is very modern. Node.js has been created many years later than Python, Java or PHP, which makes it more modern and doesn’t require maintaining backward compatibility with solutions from the previous era. This modern approach, designing Node.js’s environment from scratch, and a possibility to learn from the experience of older programming languages, allowed to develop solutions that win the lion’s share of the mobile app market.
According to the annual survey from Stack Overflow (which, thanks to its massive popularity, is often called a Facebook for developers), JavaScript is the most popular programming language worldwide. No wonder that technologies that work together with JavaScript, such as Node.js, React.js, or typescript, are also massively popular and claimed as ‘the most loved’ and ‘the most wanted to learn’.
It shouldn’t be surprising - although Node.js is one of the youngest among the most popular web technologies, it has the largest open-source community and the largest repository of libraries and packages. NPM, the default package manager for Node.js, wins over much older Python’s PIP, .NET’s NuGet, Ruby’s GEMS or PHP’s Composer. It makes software development easier and faster because we can use the database of the open-source code from other developers.

The advantages of Node.js

Websockets. Using WebSockets as an alternative to synchronous "pulling" data from client applications saves server resources, improves infrastructure efficiency, and simplifies the entire process of asynchronous event-oriented communication between the server and client application. Websockets were created at more or less the same time as Node.js which therefore became a natural platform for their implementation. In other programming languages, using WebSockets is much more difficult and usually requires tricks and hacks, such as using Node.js under other technologies that work as ‘wrappers’ for WebSockets.
Non-relational (NoSQL) databases. This is a much younger solution than relational databases (SQL) that dominated since the 1970s and that are still widely used, they’re just not suitable for all types of data. Because of the specifics of some projects, it’s more effective to use NoSQL databases such as MongoDB, which is a natural choice for Node.js. It’s similar to other technologies that work well together, such as PHP with MySQL, Python with Postgres, .NET with MS SQL, or JAVA with Oracle. MongoDB is the only object database here. By the way, its native query language is JSON and JavaScript is responsible for its query engine/stored procedures. It’s another advantage of Node.js, which in its npm repository has several mature libraries for MongoDB.
Rest API. Writing a data-oriented server application is more natural in Node.js than, for example, in Python or PHP. Their frameworks such as Django or Symfony provide monolithic solutions based on a classic rendering of front-end views on the server-side. At the same time, the most popular frameworks for Node.js (such as Express.js, hapi.js, nest.js or restify) are focused on providing REST APIs with JSON payload. Of course, you can use both approaches in all the languages, but the Node.js’s ecosystem works better with Angular or React (which are the most popular front-end frameworks). Thanks to that, mobile applications can work on the same sets of data as the front-end, which saves time spent on development. Node.js, on the other hand, has much less mature monolithic solutions, operating in a similar way as Symfony or Django.
Microservices. Due to Node.js’s non-blocking I/O specificity, asynchronous operation and focus on events, writing code directed to microservices is easier in Node.js than in other languages. The community around Node.js seems to confirm that by publishing various libraries or frameworks that facilitate work with microservices. Microservices are particularly useful in complex projects where it’s necessary to scale (often automatically and dynamically) and to separate the responsibilities of individual services. When one microservice is responsible for one, separate thing and can act independently, it facilitates development in a large team, because it minimizes conflicts in the code,  increases reusability of code or entire components or applications, ensures higher availability of the entire project as well as immunizing the project for the "single point of failure".
Operation speed. When there are projects with a large stream of data coming from external sources (cash registers, IoT devices), it is important to use a solution that minimizes the overhead on input/output support. Otherwise, this element can be the bottleneck of the entire system. Many benchmarks show that fast input/output (I/O) and its parallel processing is the strongest side of Node.js. In fact, that's why the Node.js was created.
Given all these facts, it shouldn’t be surprising that the popularity of Node.js is growing so fast. It is widely used by both startups and well-established companies because everyone wants to develop products in a way that is simple, fast, and powerful.