Who is Doing all the Hard Work: The Top 5 Projects That Promote Real Blockchain Adoption

Adoption means everything for a technology. What is any project worth if nobody is ever going to use it? Blockchain technology has been around for more than five years (Bitcoin was released in 2009) now, and the past two of them were pretty intense, like crowdfunding on steroids. Conducting an ICO was easier than raising funds from venture capital, so everyone went for it.

During the last two years, more than 1,700 projects emerged, according to the total coin number on Coinmarketcap. Even more of them didn’t make it to CMC because the majority of them fail. According to statistics, in February the percentage of dead projects exceeded 46%, and most of them failed within 4 months. But does that mean that none of them will ever deliver a working product, thus making it so that we won’t actually see a real-world blockchain use case? Not at all! Here is the list of blockchain projects that will almost certainly succeed, bringing about mass adoption to blockchain technologies.

OmiseGo is a project of the payment provider Omise, currently processing more than $30 billion per year. Its goal is to “unbank the banked,” eliminating the need to open bank accounts to pay for something. The idea is that you don’t need to have a bank account to store your money, you can just store it on the blockchain. All you would need to do this is a mobile phone and the ATMs in local stores for deposits and withdrawals. At the same time, Omise wants to create a global exchange that will allow any kind of fiat currencies, cryptocurrencies, tokens, or even corporate bonus points to be instantly interchangeable using the blockchain and paying really small fees in the process. Each transaction, processed by Visa, costs 1% — 1.5% to a merchant when they accept it. By using OMG Network, they can cut down the cost to 0.5 or even 0.1% (the fees will be dynamic), thus saving millions or even billions. It may sound easy, but it’s not.

By design, OMG is gonna be an implementation of Plasma — a super fast Ethereum second layer. In its full potential, Plasma can achieve millions of transactions per second, but when the OMG project was started, there wasn’t a working Plasma platform yet, so they had to build one, helping Ethereum to scale in the process. OmiseGo’s team works with Vitalik Buterin and Joseph Poon, the author of Lightning Network.

Also, the team bought a few exchanges to get liquidity right from the start. The goal here is to incentivize staking, because stakers secure the network by validating blocks. They receive all fees as a reward. The more volume, the more fees for everyone. OmiseGo already has its own clients who will be using the network after the launch, and they signed onto some big partnerships under NDA, so the future looks bright for them. Vitalik Buterin once said that the OMG token model is his favorite. That’s probably because the tokens of the network have real utility — the network simply can’t function without them.

One of the main characteristics of a cryptocurrency, which is created specifically for payments, is its fees. The lesser you spend on fees, the more money you have for yourself. The blockchain helps to cut down the fees, as we seen in the previous example. But there’s an even cheaper technology — DAG (Directed Acylic Graph). DAG is a sequence of blocks, or a sequence of transactions, that may be processed simultaneously. There are various DAG currencies — NANO, Byteball, Dagcoin, IOTA (we’ll talk about this one later in the article) — and they all have one common feature; each user confirms its own transaction, so there’s no need for the expensive mining power of miners or forgers, thus no need to pay fees. DAG currencies are feeless.

One of them is NANO, formerly known as RaiBlocks. It has a block-lattice architecture, so each user has its own block that has its balance written in it. When a transaction happens, the balance gets updated. Each user provides the computational power for verification of its own transactions, and it cost next to nothing — Nano needs only 0.112 W per transaction, which is 8.5 million times less than what Bitcoin requires (950 kW per transaction), making the whole network eco-friendly.

The most interesting about NANO is that it’s actually used in poor countries with hyperinflation, like Venezuela. Venezuelans actively use crypto on a daily basis, because their own currency, the bolivar, loses value each day.

There was a story on Reddit where users donated 230 NANO to a Venezuelan redditor, who said that 0.5 NANO is equal to his month’s salary. He used it to buy 102 kilograms of food from merchants, paying 29 NANO in the process. He then shared it with his family, friends, and neighbors. This user, Hector, explained in an interview that you can buy one of the following things for 1 NANO ($2.6): 2 kg of cornmeal, 1 kg of meat, 13 eggs, 2 kg of rice, 0.5 kg of dried milk, 1 liter of cooking oil, 100 pills of paracetamol or acetaminophen, 2–3 pills of antibiotics, 8 rolls of toilet paper, 1 shampoo of 700 ml, or 2 sticks of deodorant.

NANO isn’t as popular as Bitcoin in Venezuela, according to Hector, but the NANO community is active and developing there, and the merchants accept it. Paying zero fees is great for such poor countries, so NANO helps them to live just a little bit better.

Many people in the blockchain industry care about the society, and that’s what the SocialGood Project is about. The SocialGood Project incentivizes participation and holding onto the coins. The system is designed in such a way that each time you buy something in the Social Good ecosystem from authorized merchants, you get cash back. The more you hold it, the higher the cashback rate is.

SocialGood Project is a spin-off project of the fintech company Ayumi Trust Group (established in 2005), now running under the catchphrase “Cryptocurrency for Better Society”:

It’s built upon the principles of ESG, which is the acronym for Environment, Social, and Governance, and it is currently drawing the attention of the investment industry. It was proposed by Kofi Annan, ex-Secretary of the United Nations, in its “Principles for Responsible Investment (PRI).” Over 1,700 institutional investors and management companies worldwide have signed on to ESG investments under the PRI being promoted by the United Nations Environment Programme (UNEP) and the United Nations Global Compact (UNGC).

Japan’s Government Pension Investment Fund (GPIF), the world’s largest pension fund, has also signed on to the ESG. Representing the same principles, the integration of ESG factors into investment processes and decision making, and the Social Good has a huge potential to become very big if it attracts the investments from the same funds.

Like Amazon, its business model relies on matching the consumer to a company, using AI to find offers that might interest a consumer. The difference is that the Social Good Ecosystem is decentralized and it allows those businesses that can’t list their services on Amazon (like jewelers, realtors, lawyers, and hairdressers) to participate in the ecosystem marketplace, so the number of its participants could be really big.

Each year we have more and more smart devices around us. Now we have 1.2 billion of them, and by 2020 this number will exceed 31 billion.

Amazon Alexa is the most obvious example, but there’s also a lot more. Self-driving cars, smart homes, smart crop systems — all of this is made real thanks to the Internet of Things that connects these devices. But all of these devices must have a protocol that unites them all. One such candidate is IOTA. IOTA is another DAG currency or protocol (call it as you like). It’s feeless too, like NANO, and it’s built for the Internet of Things.

The IOTA Foundation is a part of The Trusted IoT Alliance, and works with Bosch and Cisco to integrate IOTA with their devices.

Car manufacturers can save a lot by using it. Industry projections for over-the-air (OTA) vehicle data management suggests that the technology could save automakers $35 billion over the next five years, saving it on numerous software updates that have to be done manually. With the integration of IOTA, this task could be done remotely. IOTA currently has partnerships with Volkswagen and Porsche, as well as with Ford, General Motors, BMW, and Renault — pretty much all covered!

Smart cities can also be built by using it. Taipei wants to use IOTA to build just that. Another smart city project with IOTA involvement is the +CityxChange project, which got a grant from the EU Commission, and will transform five European cities into smart cities. Do we really need more evidence regarding IOTA use cases? That’s global adoption on a large scale.

The energy market is developing really fast. Solar, wind, and natural gas energy production are growing, as well as the consumer demand. In 2015 the global market was worth $1.3 trillion, and it continues to grow.

The current problem is the nonoptimal distribution of energy, something that the blockchain can solve, presenting a real use case for energy markets. Projects like Power Ledger are the platform for P2P energy trading, where everyone can buy and sell energy according to demand.

Blockchain technology represents the principle of eliminating the middleman. In the case of the energy market, the principle is the same. In the energy supply chain, you allow the producers to sell energy to consumers. For example, if you have solar panels installed on your lawn, and it’s always sunny on this lawn, you can sell the surplus energy you have to your neighbor. Allowing the energy to be traded freely, it opens the completely new paradigm for the market, eliminating the inefficiencies of the current energy distribution model and decreasing waste electricity.

POWR has been in operation since 2016, and it is now being used every day all around the world to trade energy: in Japan, in Thailand, in North America, and it operates one of the biggest energy platforms in Australia.

The energy market is hot right now, and it’s gonna develop further as it benefits from using the blockchain. Stephen Callahan, Vice President at IBM, claimed: “What the Internet did for communications, blockchain will do for trusted transactions, and the energy and utilities industry is no exception.”

As we can see, there are currently several applications to the blockchain, and all of them are designed to make our life better. All of them are helping people to save money, or even gain something, by adopting it. Not every project is a scam. Of course, there are some fraudulent ICOs out there that dream only about riding off into the sunset with stolen money. But those who succeed in delivering the product will change society and help to shape a better future for everyone.

My Dog Wants To Be Tokenized, How Could I Do It? 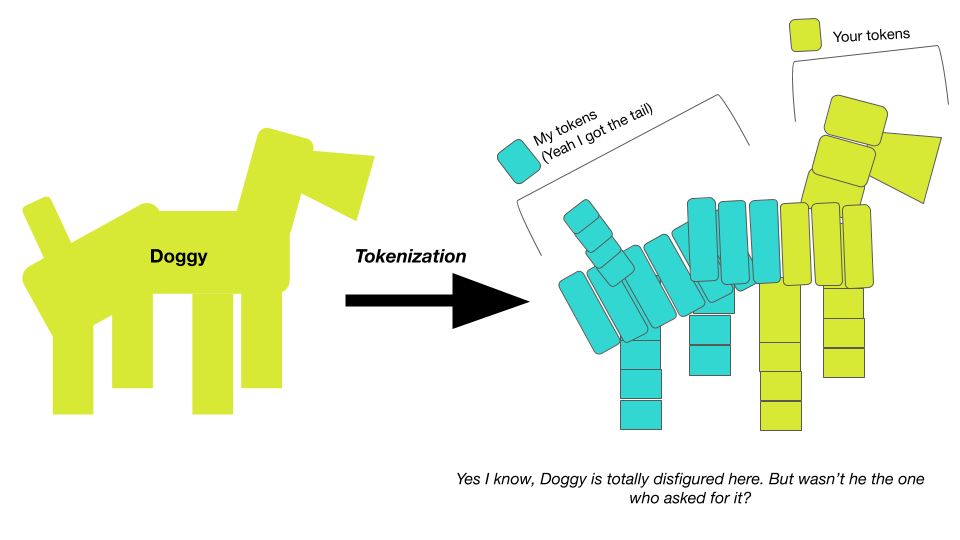