What Should You Expect From A Truly Private Digital Cash? 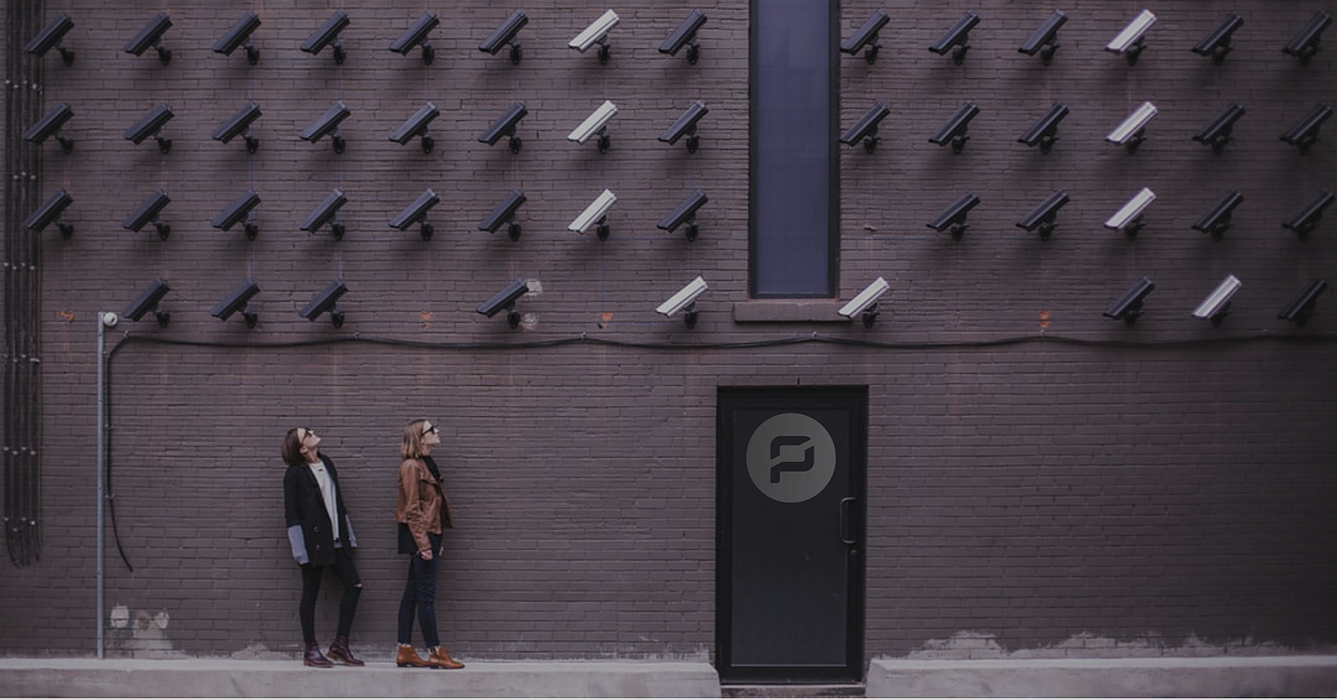 The idea of virtual payments dates back to the start of the dot com boom. One of the early notable attempts was by FirstVirtual (1). Unfortunately, FirstVirtual was bogged down with a rather cumbersome payment process. First, the seller would send the sale details to FirstVirtual. Next, FirstVirtual bills the customer and collects their credit card information. In a seemingly archaic practice, FirstVirtual would hold the payment for up to 3 months. This is in case either party had any disputes. What is even more bizarre is that all communication was done turn by turn via email.

DigiCash was one of the first noteworthy iterations of digital cash. David Chaum founded DigiCash in 1989 in Amsterdam. DigiCash was intended to counter the government's surveillance enabled by the electronic road toll systems. Two DigiCash products were released, eCash and Cyberbucks. Both currencies offered complete privacy between merchants and clients. However, DigiCash eventually fizzled out due to (a) collapse of the anonymity structure as merchants cashed out to banks, and (b) poor user experience due to the high friction in making transactions.

CyberCash was the next somewhat successful player that came along in 1994. They used the Secure Electronic Transaction (SET) micropayments software architecture standardized by Visa, Mastercard and IBM. At its peak, users could pay charges as little as $0.10 and accounts were FDIC insured up to $100k. Unfortunately, the company was hit by the Y2K bug and eventually filed for bankruptcy. The intellectual property was sold and resold and eventually owned by Verisign, then Paypal today.

All of these still involve the legacy payment systems. What followed were several attempts at digital currency, each experimenting with Proof-of-Work algorithms, that were eventually fundamental precursors to Bitcoin. Adam Back’s Hashcash (1997), Wei Dai’s B-money (1998), Nick Szabo’s Bitgold (1998) and Reusable Proof-of-Work by Hal Finney (2004) (2).

Bitcoin is the best solution the world has to a currency with sound monetary policy. The virtues of Bitcoin are many but are beyond the premise of our discussion here. The public ledger of Bitcoin makes it at best pseudonymous. Although fiat is fraught with problems of poor monetary policy, physical cash beats Bitcoin in its privacy. No third party can track your spending when you use cash. The US dollar bill is still the most liquid and anonymous form of currency in the world today and is still the payment of choice in all matters political and criminal around the world (3-5).

The transparency of Bitcoin, however, is detrimental and even dangerous at many levels. Every transaction made reveals the balance of your wallet to the other party. It does not take any stretch of the imagination for large corporations to track you through your wallet transactions and vice versa. In fact, this is so much easier than trying to track you through your credit card transactions as those are sequestered in private servers. Whereas with Bitcoin, the blockchain is broadcast globally.

Even worse, nefarious actors can target you once they have identified your generous wallet balance. This public display of your financial status to the world is found not just in Bitcoin but in also in every cryptocurrency without native privacy. Financial privacy is paramount to individuals and business entities.

“Privacy is not about the right to be left alone but the right to exercise control. In our increasingly data driven economy, privacy is money.” - Alex Gladstein, Human Rights Foundation.

Truly private, digital cash is a fundamental pillar of any economy. There are numerous variants of Bitcoin that claim to be private, but almost all have optional privacy. One needs to know that optional privacy is NO privacy at all.

It is worth noting that Wasabi’s optional privacy-for-a-fee service Samourai wallet is a frequently promoted privacy option for bitcoin. This wallet mixes up to 100 transactions using a method called Coinjoin. The caveat is that the fee increases according to the size of the anonymity set you choose. Choosing to hide your transaction in a group of 100 will also cost 100x more (6).

Binance has already fired the first shot across bow freezing funds from a wallet that was sending bitcoin to a Samourai wallet address (7). The U.S. Justice Department Assistant Attorney General Brian Benczkowski declared the usage of Coinjoin mixers a crime (8). Due to the Coinjoin mixer that he operated, the CEO of DropBit was charged with money laundering in February 2020 (8).

Players in the cryptocurrency privacy sector include top marketcap leaders such as DASH, ZCash, Monero, and forks of those such as PIVx (from DASH) and Sumokoin (from Monero). Let’s discuss the three marketcap leaders and household names of the privacy space that cryptofans would know about. First, DASH has the weakest privacy.

It uses PrivateSend which is a method of mixing the transactions. This is a weak form of privacy. More egregious is that DASH offers privacy as an optional secondary feature. You see, DASH, like many cryptocurrencies focus on adoption and speed of transactions, with privacy as an afterthought.

The state-of-the-art of privacy cryptography is “Zero-Knowledge Proof” (ZKP). ZKP validates the truth of something without revealing how that truth is known or sharing the content of this truth with the verifier. Hence, when applying ZKP to cryptocurrency, transactions can be validated without revealing any information about the sender’s address, the transaction amount or the receiver’s address.

ZCash is a pioneer cryptocurrency that employed zero-knowledge proofs in their Zero-Knowledge Succinct Non-Interactive Argument of Knowledge (ZK-SNARK) algorithm. However, at the time of writing this article less than 10% of ZCash transactions are private (9).

This creates a vulnerability for users that desire privacy, the other 90+% public transactions become datapoints, allowing for chain analytics to decipher the private transactions just like a sudoku puzzle.

Arguably the most notorious, Monero (XMR) comes to mind when someone in crypto thinks of a privacy coin. Even John McAfee talks about Monero when asked about privacy:

Monero uses Ring Confidential Transactions (RingCT) / Ring Signatures (RingSig) to confuse any inquisitor of transaction details. The algorithm essentially mixes the input from several transactions to obfuscate details. However, the algorithm only uses the data from a maximum of 15 transactions (upgraded from 7 recently).

Monero has just implemented the Bulletproof algorithm to hide transaction values. What Monero does right is the enforcement of mandatory private transactions.

So, despite dozens of projects that claim to be in the privacy sector today, Monero and Pirate Chain (ARRR) are the only two cryptocurrencies with non-optional (mandatory) private transactions where all transactions are private-only.

This means that balances of every address are not visible to anyone else beside the user. There is no rich list. These transactions also cannot be tracked as there is no public display of the transaction on explorers. 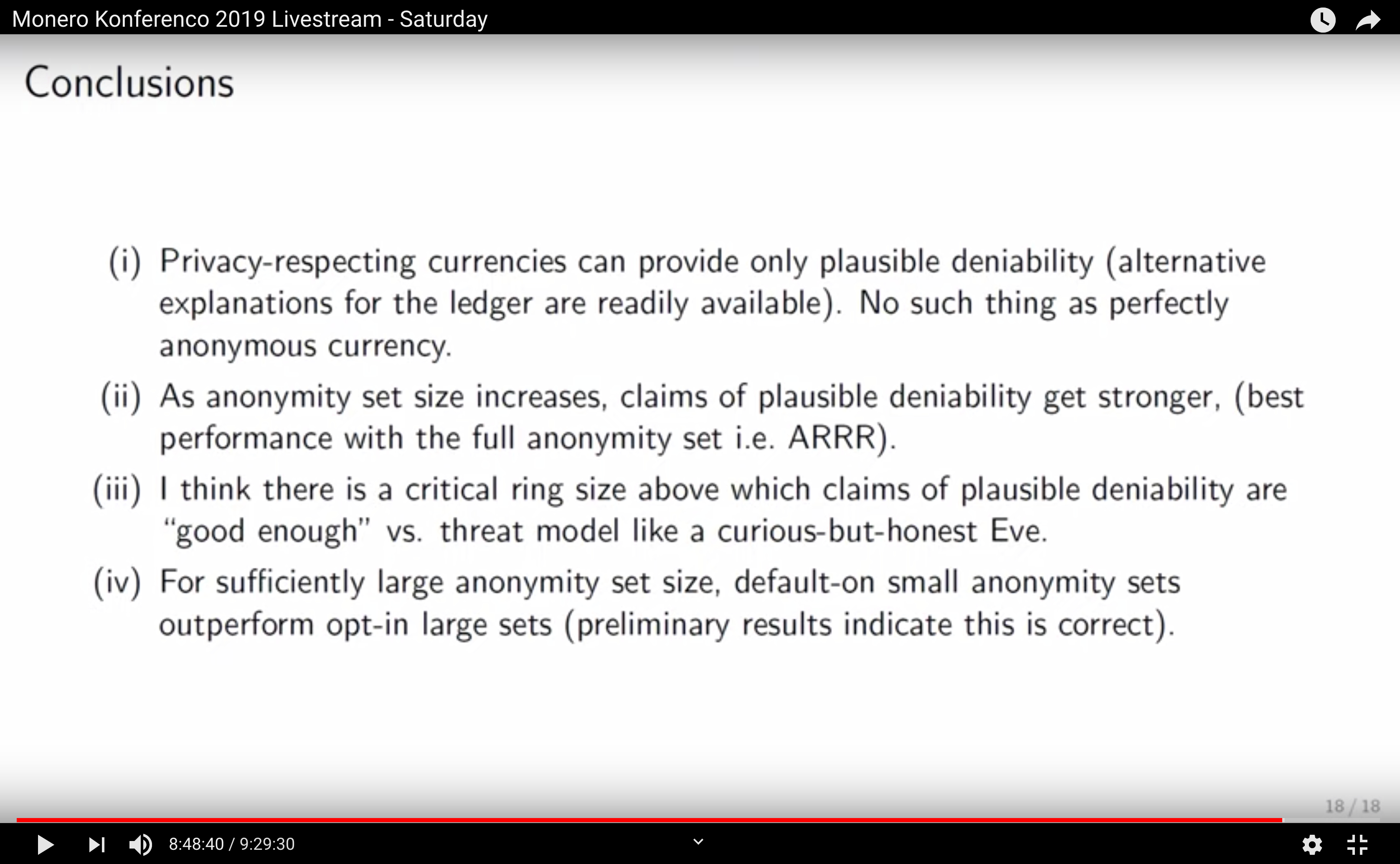 Just as noteworthy is that both ZCash and Monero’s admins have publicly praised Pirate Chain for superior privacy. 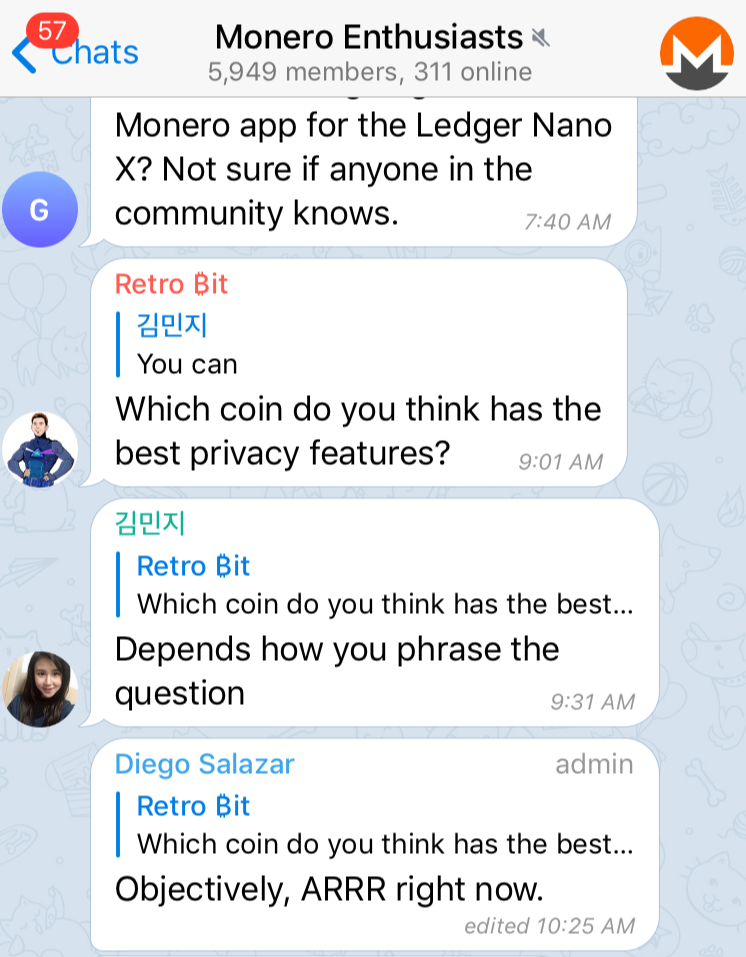 Pirate Chain is the first in the history of cryptocurrency to implement a mandatory private-only usage of zk-SNARKS.

Privacy is not Pirate Chain’s only outstanding feature. Pirate Chain is also secured by Bitcoin’s network using delayed Proof of Work (dPOW). ARRR secures its blockchain by the use of 64 elected Notary Nodes (NNs). These NNs validate transactions then notarize them into both Komodo and Bitcoin’s blockchain.

Attempts to overcome Pirate Chain with a Sybil attack would first have to overcome 51% of both Bitcoin and Komodo’s hashrates first. This is virtually impossible at the hashrate of both these chains today.

As you can see, Pirate Chain is for all essential purposes the perfect privacy-first cryptocurrency by being absolutely and incomparably private, while at the same time undeniably secure in this sector. Even John McAfee favors Pirate Chain as his go to privacy option. https://twitter.com/officialmcafee/status/1213840656826818560?s=20 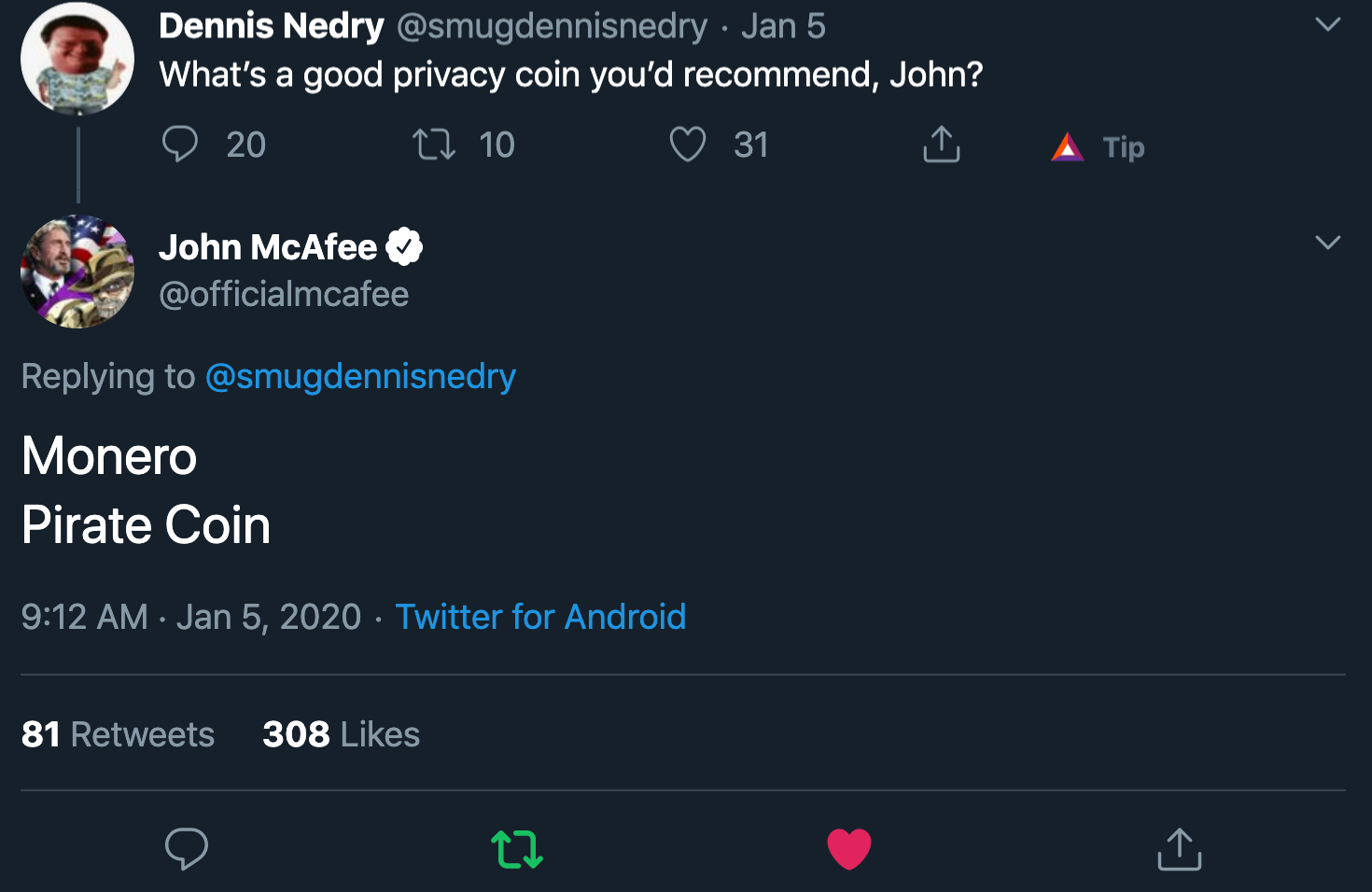 In today’s digital world, every action online is monitored and tracked. All financial transactions are at best recorded, or worse, hijacked by hackers for future illicit purchases.

Many other cryptocurrencies value adoption and coin price above privacy, with privacy features as a secondary feature. Pirate Chain’s ethos is privacy-first above all else.

As the leading cryptocurrency with the best privacy, Pirate is the closest approximation to the US dollar in terms of anonymity and also boasts the sound fiscal policy of Bitcoin with programmed scarcity.

While usage of $ARRR secures and anonymizes the financial transaction, there are still potential vectors of attack. The community at Pirate Chain came together to build a privacy-centric, operating system with the primary goal of protecting the user’s security and anonymity.

When using a Pirate Chain wallet with PirateOS you are naturally more protected than any other wallet in crypto because it defends you with protections like VPN and Tor by default.

The OS also boasts pro-active defenses like MAC address spoofing which gives you anonymity on your own local network and drive encryption to prevent unauthorized access.

Welcome to the new Economy of Privacy, brought to you by the
truly private digital cash and most anonymous cryptocurrency, Pirate Chain. 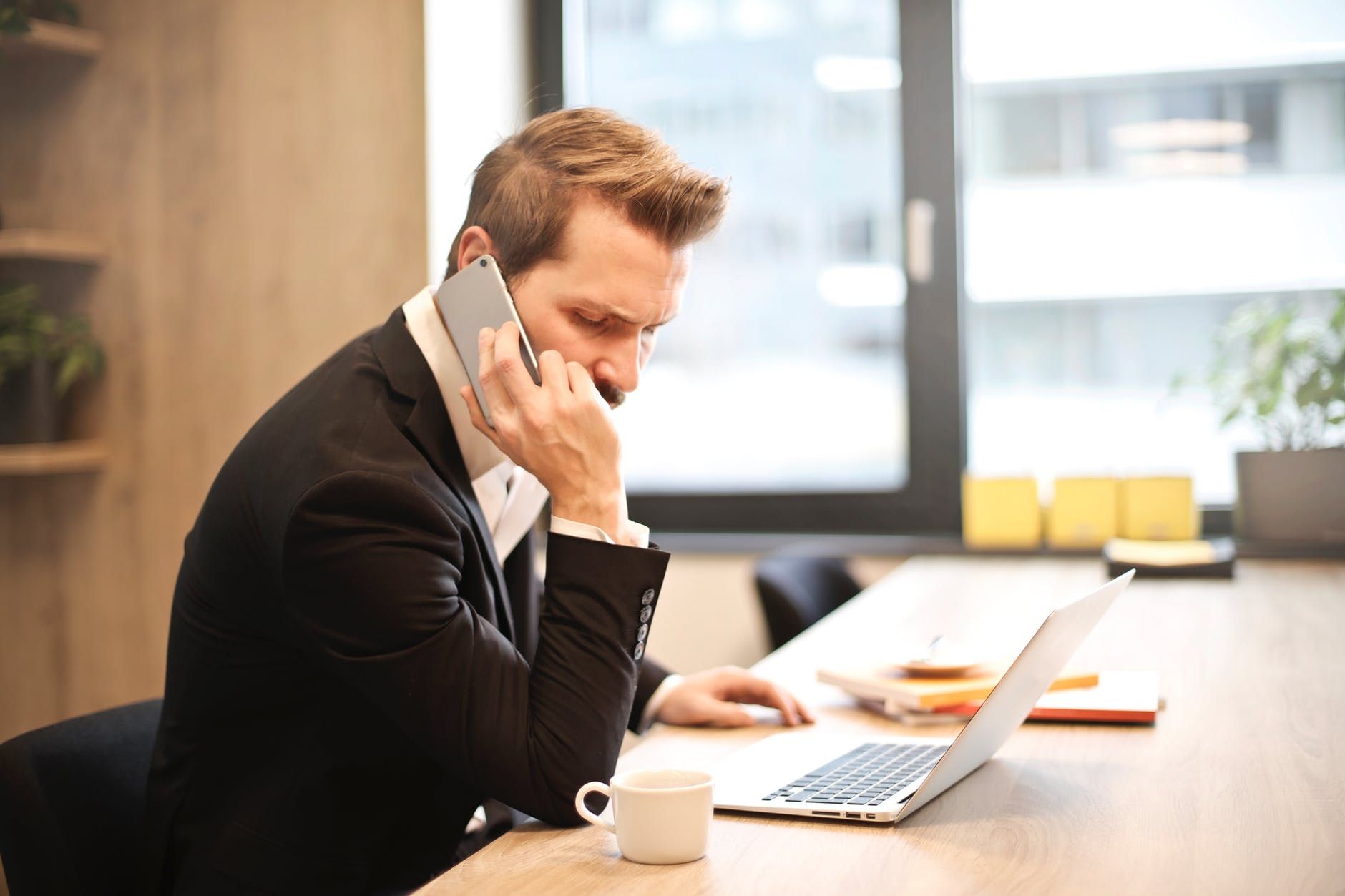