Mobile game whale are described as a tiny group of users (around 1-2%) that drive the most revenue for mobile apps and game publishers.

Who are “mobile game whales”?

There are plenty of fish mammals in the sea. But not all fish mammals are the same — some are simply better than others. A mobile gaming whale is someone who spends a lot on micro-transactions. So-called “whales” are the main target for micro-transactions in free-to-play games, for example; they’re the ones who buy booster packs, cosmetics, etc.

According to data, in most top-grossing games, the whales represent the smallest percentage of users who are responsible for up to 50% or more in revenue sales of an app.

Gaming whales are special, rare, but very valuable users that every mobile app or game is going after. Whales are the users that are spending hundreds, thousands or even millions in a mobile game. And they will often make a difference for a game from breaking even to being profitable.

This type of user won’t be that easy to “catch”. Top-grossing companies will sometimes pay more than $500 for a “super whale” type of user. It might seem like a lot, but if that user spends thousands of in-game, the investment is completely justified.

“In the early stages of the mobile gaming explosion, every publisher hunted whales. Only a tiny fraction of gamers actually paid for in-app goodies, and while minnows were OK for ad revenue, big spenders — the whales — drove success.” Over the past few years, the number of gamers who make purchases rose by a third. 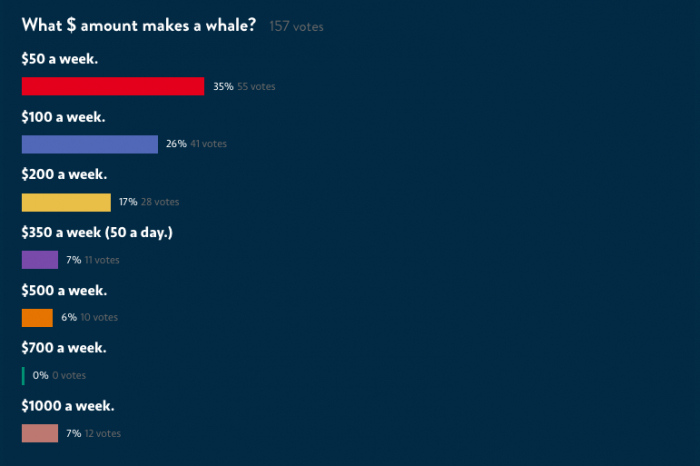 A simple question asked on Galaxy of Heroes forum. What amount of money qualifies a user as a whale?

As more game players choose to spend money in-game, developers need to rely far less on mobile games “whale” or the big spenders. The quality of free apps has also improved and the paid app monetization model just isn’t that attractive. Currently, less than 5% of apps in the Google Play Store are paid (App Brain).

Paid apps are most often produced by well-known software companies that have a better chance of reaching more users.

Some of the top-selling apps in the Google Play Store are Minecraft, Grand Theft Auto, Assassin’s Creed Identity — already established and familiar titles.

Nowadays, games have more balanced monetization models since they have more casual spenders along with the “whales”.

In the last three years, the percentage of paying players per game in North America has increased by a third (to 4.02%), and by a fifth (to 2.43%) in Europe (Delta DNA). 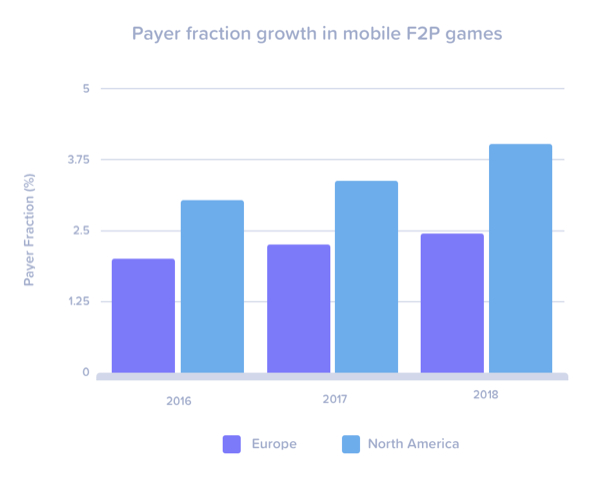 In the past few years, the ARPDAU (Average Revenue Per Daily Active User) has been rising steadily for some specific genres. ARPDAU is a metric that helps you understand how well your monetization is working.

You’ll need to track the success of your monetization, no matter which monetization model you’ve chosen.

ARPDAU will also tell you how any changes you’ve made in the app are affecting the success of your monetization.

How to calculate ARPU or ARPDAU?

ARPU or “Average Revenue Per User” is a metric that will help you understand whether your business model/monetization strategy works (or not).

When you’re acquiring users via different marketing channels, you’ll see that the ARPU can vary from channel to channel.

Keeping track of ARPU per channel/source can help you understand what channel is making you money.

Calculating ARPU is easy. Divide the revenue with the number of users in a specific period of time (i.e. day — ARPDAU, week — ARPWAU, month — ARPMAU).

Want to know what’s your ARPDAU or ARPWAU? Use the same formula over the desired period of time. 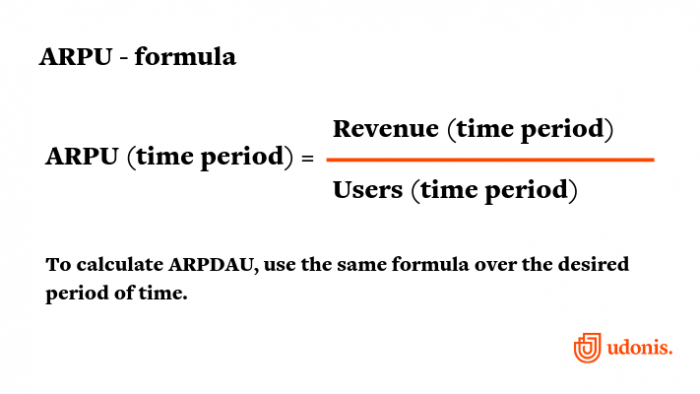 Why is ARPDAU important to track?

If you track your ARPDAU, you’ll see how some changes or events are affecting the revenue you’re making. Whether you’re changing the placement of your ads, trying out new creatives or adding a new ad format to your app, you’ll notice positive (or negative) trends that will tell you how to optimize further to achieve the maximum revenue.

ARPDAU within strategy games has soared by 199.9%, while in casino games ARPDAU has risen by 41.6%!

In the world of mobile gaming, whales are still important, not as important as they used to be. John Koetsier, VP of Singular, in an article about mobile game whales mentioned that he spoke to a casual mobile game publisher who had a whale who spent over $1 million on her platform.

App publishers of the modern age rely more on scalable monetization models that will bring in a penny from each sardine, not a million from one whale.

Mobile games became the fastest-growing category in overall gaming, leaving behind consoles, desktop games and handheld gaming. PlayerUnknown’s Battlegrounds (PUBG) and Fortnite are some of the names we’re seeing in top charts all over the world.

They might look very different and appeal to different markets, but they both fit in the same category of battle royale games. Battle royale games are exclusively multiplayer and most often free-to-play, offering in-app purchases.

The social factor of these games can’t be denied. When you’re playing with your friends, you’ll want to show off and buy that extra pack or upgrade to look better, and win!

This isn’t a Game of Thrones reference, but an online tool meant to improve and analyze your game performance and metrics, named after the top mobile gamers (whales).

Game of Whales team’s mission was to develop the “dream platform” that would actually increase the metrics they wanted to see improvements in. They’ve built an intelligent tool that automatically increases revenue, conversion rates, ARPPU and retention rates in mobile games.

Game of Whales was developed with the mobile gaming “whales” in mind. It does the entire process of identifying, interacting, and optimizing potential whales, automatically. The AI algorithm technology uses behavioral predictions to identify and motivate all of your whales for you. 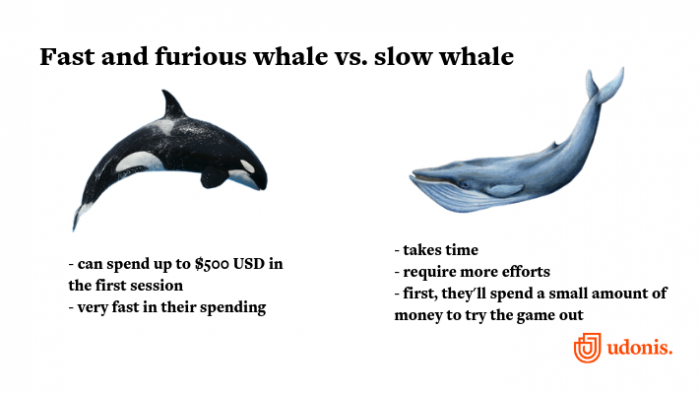 Slow whales are much slower in their spending habits, at first they’ll spend only a small amount of money to try the functionalities. Once they get to know the game and they start playing it more actively, they’ll spend more and more money. With this type of player, your focus should be on retention, keeping them happy, engaged and interested. Slower whales might be trickier to hunt and you will have to invest more time and effort, but they will definitely reward you in the end.

GUIDE: How to catch a mobile game whale?

Mobile game whales are hunted down with ads, not spears bro.

The answer is simple — paid ads. But how?

The big ad networks, like Facebook or Google, offer advertisers a way to optimize campaigns for their certain in-app actions. That action can be anything important to your business.

Still, the most common event is an In-App Purchase. Instead of optimizing your campaigns for an install, you can signal the network that you’re interested in acquiring users which are more likely to trigger an In-App Event.

This will bring your CPI up, but the users you acquire are going to bring in more revenue.

Ok, but how does this work in practice? Let’s take Google App Campaigns as an example.

Under the Tools & Settings tab in your Google Ads account, click on Linked Accounts. If you’re using Google Firebase, click that, if you’re using any other analytics/attribution provider, scroll down and click on Third-party app analytics.

Note: Connecting Analytics providers to your Google Ads account can be tricky, especially the Firebase, so make sure to read the instructions and that you have the right permission levels to connect the accounts (Thanks for making this hard Google!). Feel free to shoot me a message if you have any issues you can’t troubleshoot by yourself, as I’ve gone through this process with almost every analytics provider at least a dozen times.

Once you’re in the Third-party app analytics tab, click the big blue button to add a new integration. 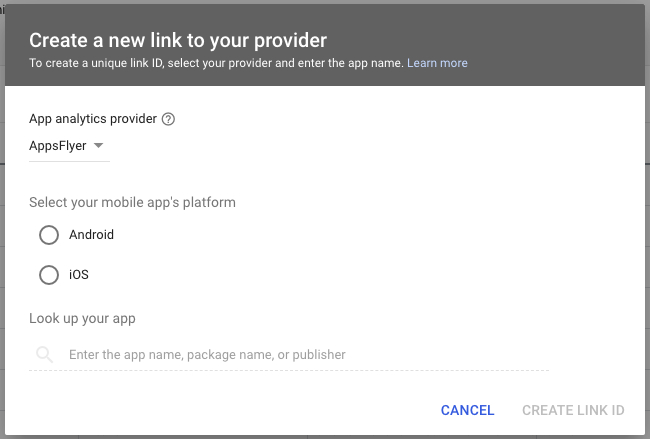 Connect your app analytics provider to the ad account and proceed to the next step.

Go to Tools & Settings tab in your Google Ads account, and this time, click on Conversions. Click the big blue button, select App and then continue by selecting the analytics provider you’ve picked.

A list with all your enabled in-app events will show up. Select the ones you want to use and click Import & Continue.

Voila! You’re one step closer to hunting down your first mobile game whale! :) 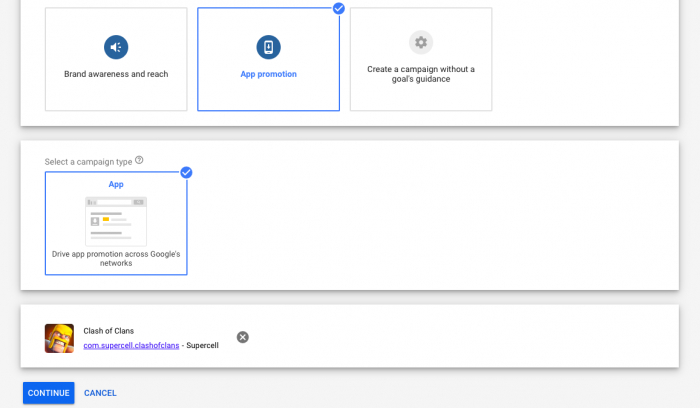 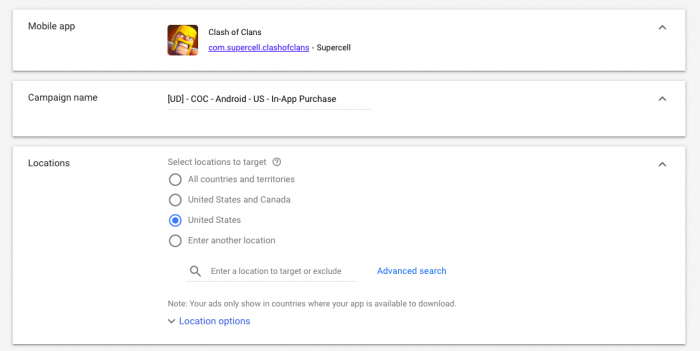 This is the key step. If you’ve properly executed step 1) and step 2), once Google asks “What do you want to focus on?”, instead of Install volume, you’ll pick In-app actions. The dropdown with all imported events will immediately show up.

Pick the one which matters the most to your business. This doesn’t necessarily have to be the in-app purchase.

It can be any user progression event based on a specific action (i.e. when a user spends a total of 5 hours in the game, or when a user plays for 10 days in a row, or when a user reaches a certain level, etc…). 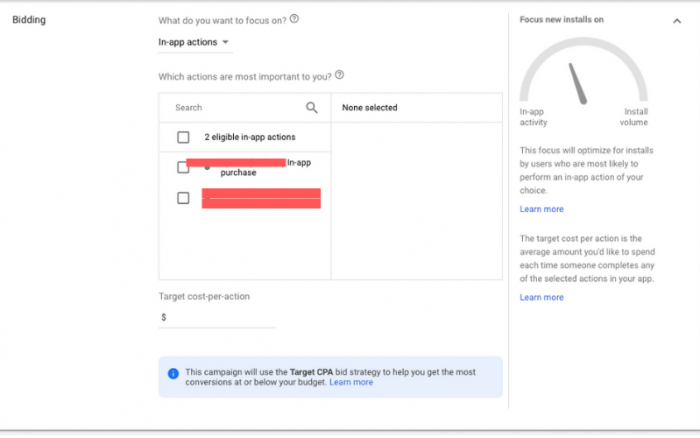 Step 6) Wrap up the campaign creation

I won’t go into too many details on this one. Add creative assets and wrap up the campaign.

Set away at least 7–10 days for your first test. Benchmark installs vs. install cost, and allow some time for the in-app purchases to start happening. Once Google’s powerful algorithms learn who is your perfect player (i.e. mobile game whale), you’ll be able to efficiently scale-up.

To sum it up; you need to pile up on data (ideally 5000 conversions). A similar process applies to Facebook, and to all other ad networks which allow you to optimize for in-app events.

Any questions? Again, just comment below or shoot me a message.

What do mobile gaming whales say?

A lot of us think: “I could never become a mobile gaming whale.” Eurogamer made an interview with David Pietz, a 34-year-old Twitch streamer that has confessed that he has probably spent upwards of $20,000 on microtransactions and loot boxes in the past five years.

When asked why did he choose to spend so much on a single game, he answered: “It’s a super competitive game. It was an RPG and your characters could get more powerful by getting weapons “pulsed”. So say that you have this gun, when you get it, it’s just a gun plus zero.

If you combine two guns you would get a plus one.” Different things motivate different players — but one thing is certain, users are spending more and more money on in-app purchases.

The connection between whales & game publishers

In 2018, there were 194 billion downloads, and in the past few years, that number has been increasing steadily. As consumers become more open to in-app purchases, consumer spending grows rapidly.

Console games are transitioning to mobile, and as the number of players increases, the ARPDAU keeps on growing.

Have questions, need help? Leave a comment below or send me a message!

(Disclaimer: The Author is a Founder at Udonis Inc)

Related Stories
Subject Matter
Enter The Decentralized Internet Writing Contest by @HackerNoon+FreeTON
#promoted
How DEXs Fuel the Development of the Decentralized Internet by @anton-dzyatkovskii
#decentralization
Dogecoin: Everything You Wanted To Know About This Memecoin Making A Mockery of 'Serious' Crypto by @@nawazmohammed
#cryptocurrency
How to Create Rock Paper Scissors Spock Lizard in JavaScript by @matviihodovaniuk
#javascript-tutorial
Introducing Total Relighting by Google by @whatsai
#artificial-intelligence
E3 Confirms Square Enix, SEGA, and Bandai Namco for 2021 Convention by @wheeljack84
#e3