Using Spinnaker with Kubernetes for CI/CD 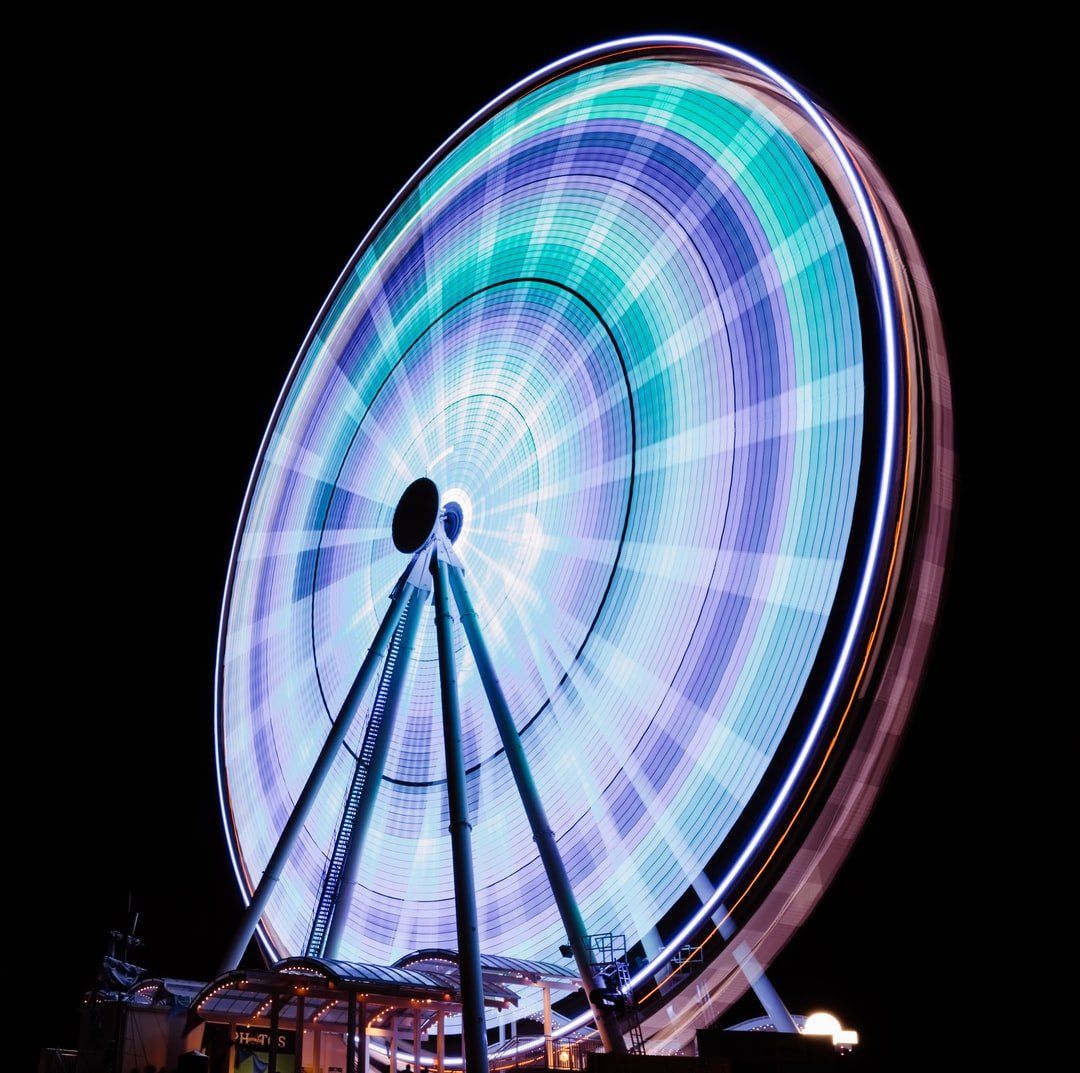 Kubernetes is now the de-facto standard for container orchestration. With more and more organizations adopting Kubernetes, it is essential that we get our fundamental ops-infra in place before any migration. This post will focus on pushing out new releases of the application to our Kubernetes cluster i.e. Continuous Delivery.

Although this post is about the CD system using Spinnaker. I want to briefly go over the CI pipeline so that the bigger picture is clear.

This is the crucial part. Spinnaker offers a ton of options for Kubernetes deployments. You can either consume manifests from GCS or S3 bucket or you can provide manifest as text within the pipeline.

Consuming manifests from GCS or S3 buckets includes more moving parts, and since this is an introductory blog, it is beyond this article's scope right now. However, with that being said, I extensively use that approach as it is best in scenarios where you need to deploy a large number of micro-services running in Kubernetes as such pipelines are highly templatized and re-usable.

Today, we will deploy a sample Nginx Service which reads the app version from a

file and renders it on the browser. Application code and Dockerfile can be found here. The part where  is updated can be seen below (This is what the Jenkins job does basically).

The manifest for the Nginx deployment and service is below:

Steps to Set-up the Pipeline: 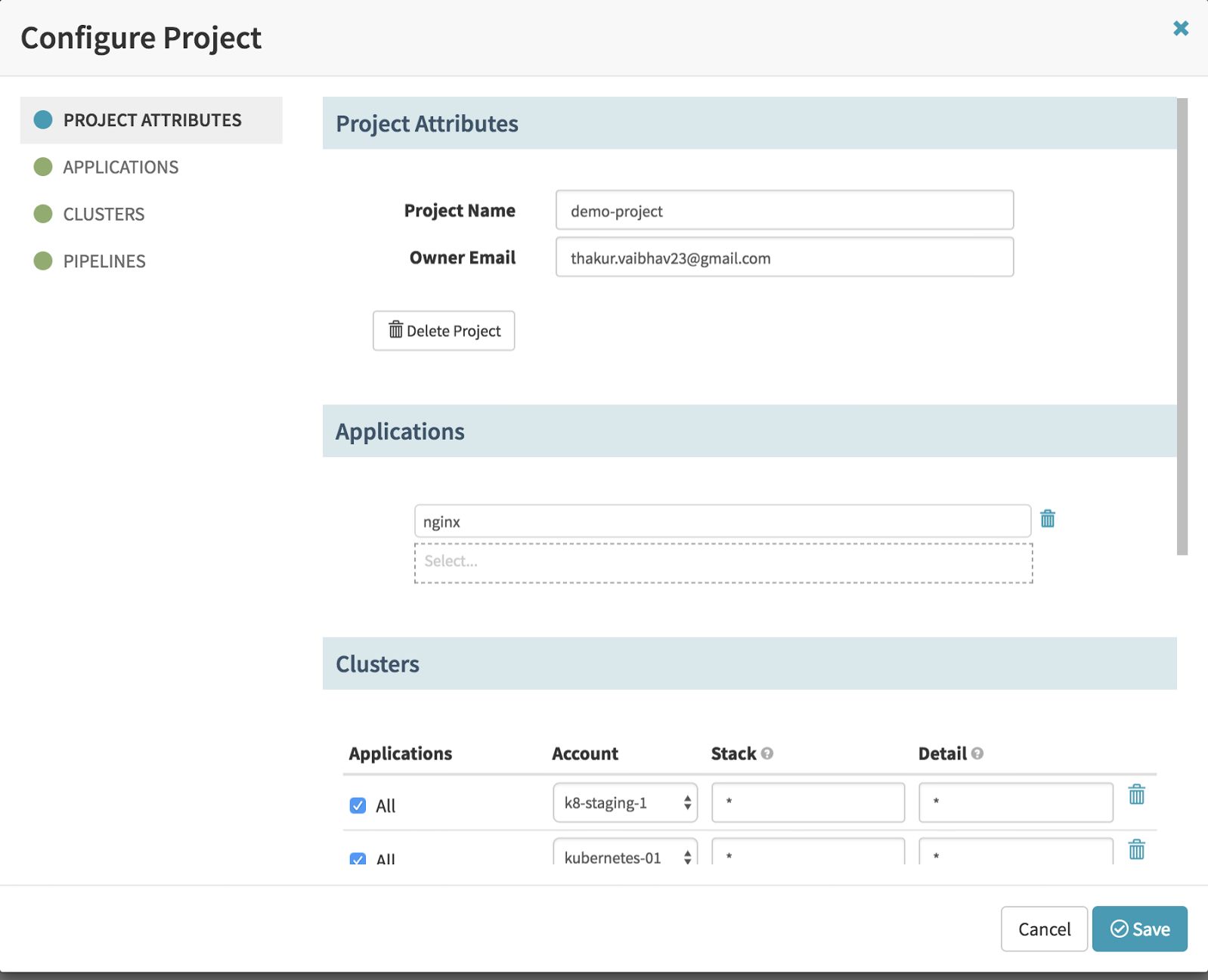 3. Under the Application section add the Pipeline. Make sure that in the Trigger stage of the pipeline, Jenkins is enabled and the artifacts are consumed appropriately. (Don’t forget to modify it according to your credentials and endpoints.)

The pipeline configuration can be found here.

4. Once you add it, the pipeline will look something like this:

Deep dive into the Pipeline:

1. Configuration: This is the stage where you mention the Jenkins endpoint, the job name and expected artifact from the job. In our case trigger. properties.

2. Deploy (Manifest): The trigger.properties file has an action variable based on which we decide wether we need to trigger a new deployment for the new image tag to patch an existing deployment. The properties file (set in the TAG variable) also tells which version to deploy the patch with. 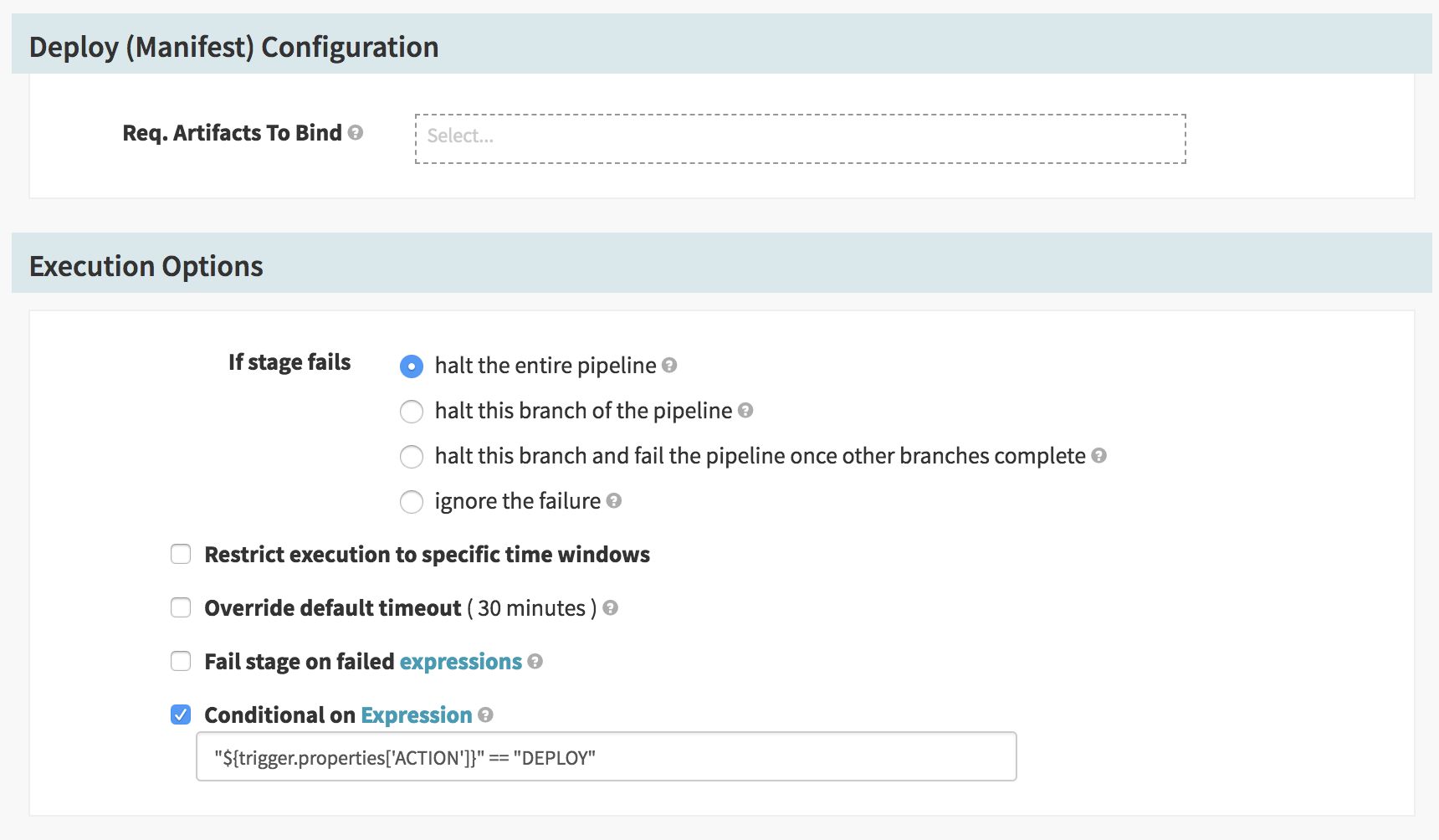 Expression validation for Deploy Stage
3. Patch (Manifest): Similar to the Deploy stage this stage will check the same variable and if it evaluates to “PATCH”, then the current deployment will be patched. It should be noted that in both these stages, the Kubernetes cluster is being used as a staging cluster. Therefore, our deployments/patches for staging environment will be automatic. 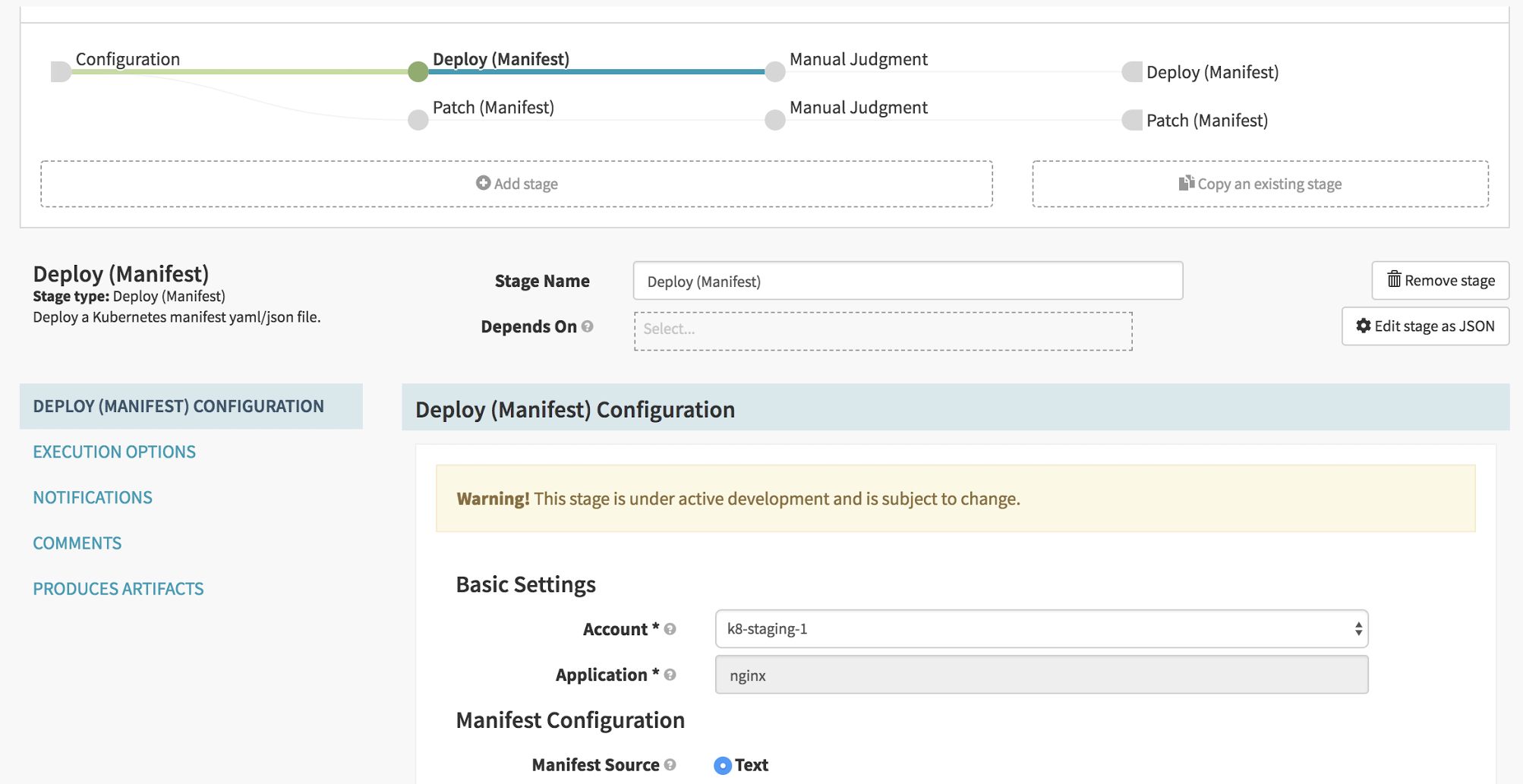 4. Manual Judgement: This is a very important stage. It is here where you decide whether or not you want to promote the currently running build in the staging cluster to the production cluster. This should be approved only when the staging build has been thoroughly tested by various stake holders.

5. Deploy(Manifest) and Patch(Manifest): The final stages in both paths are similar to their counterparts in pre-approval stages. The only difference being that the cluster under Account is a production Kubernetes cluster.

Now you are ready to push out releases for your app. Once triggered, the pipeline will look like this: 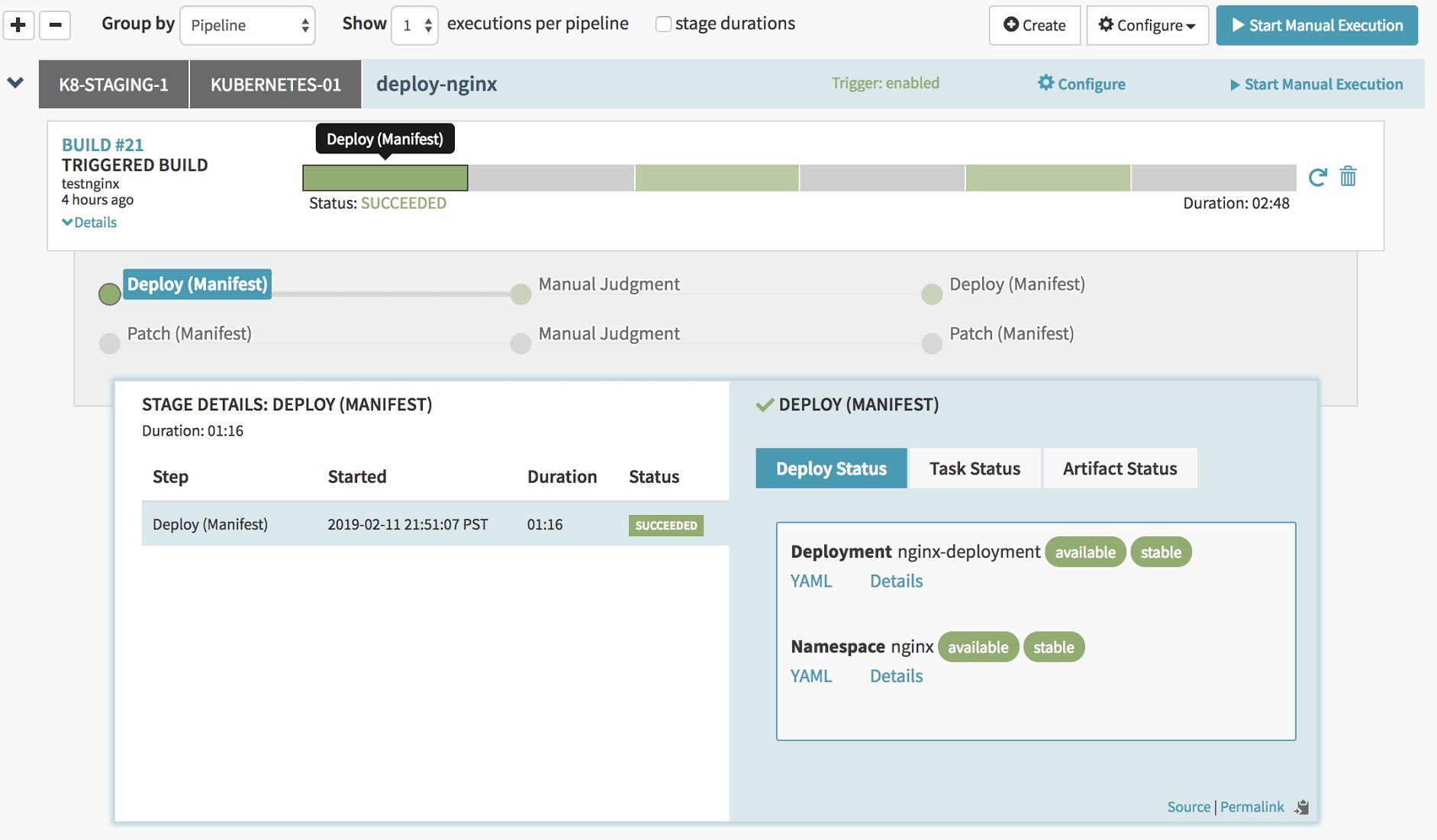 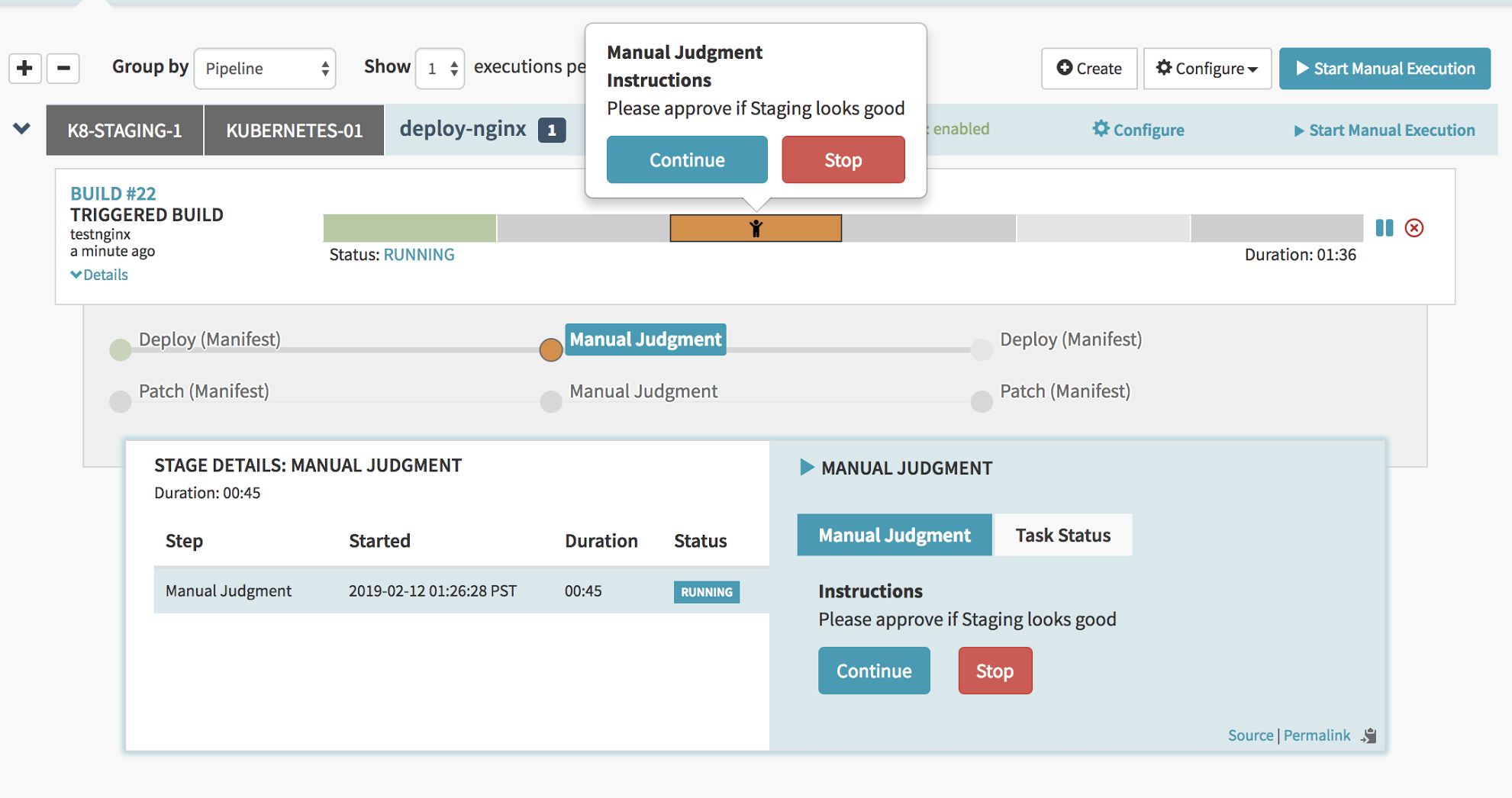 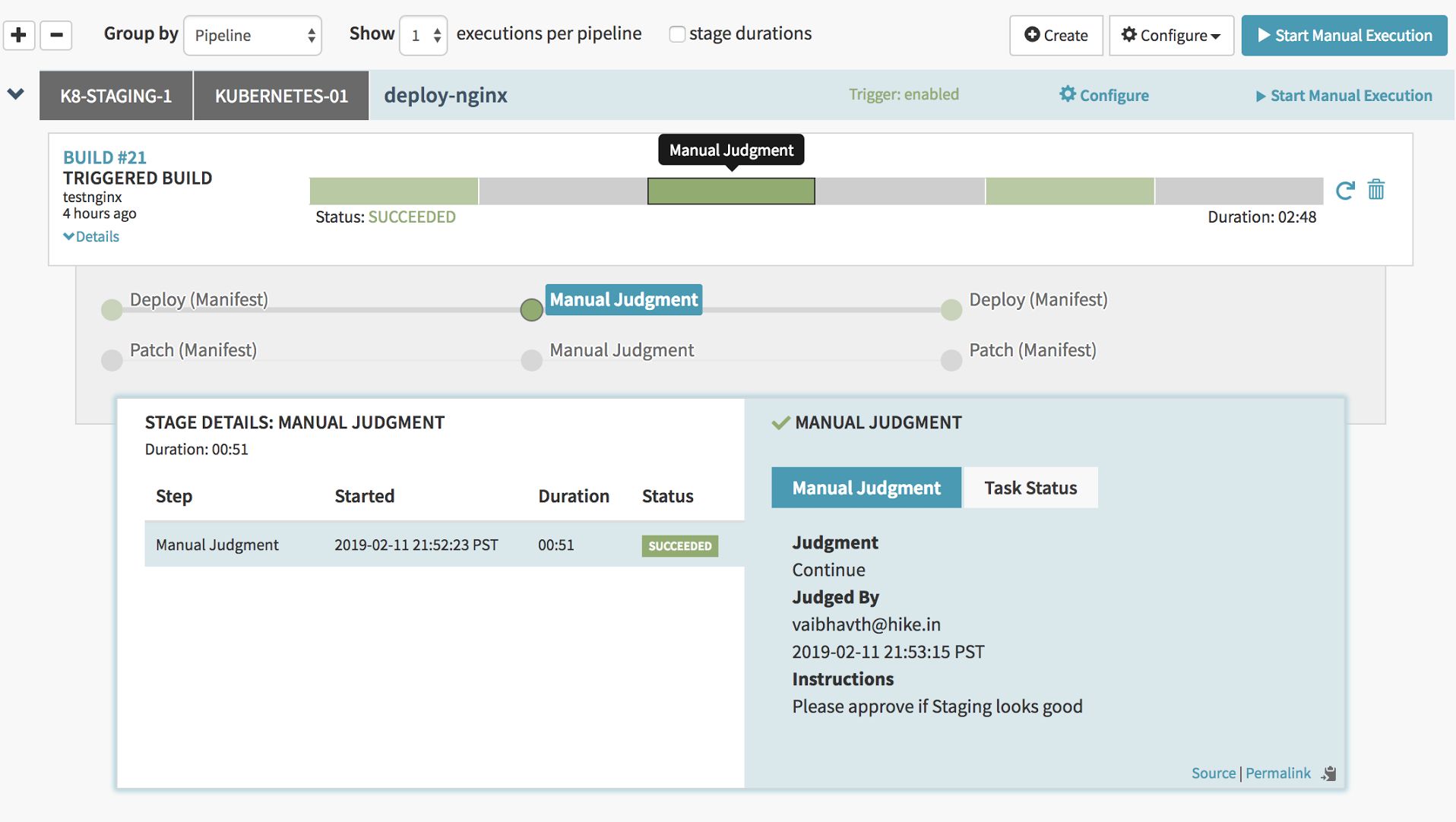 Approval Given to Manual Judgement Section 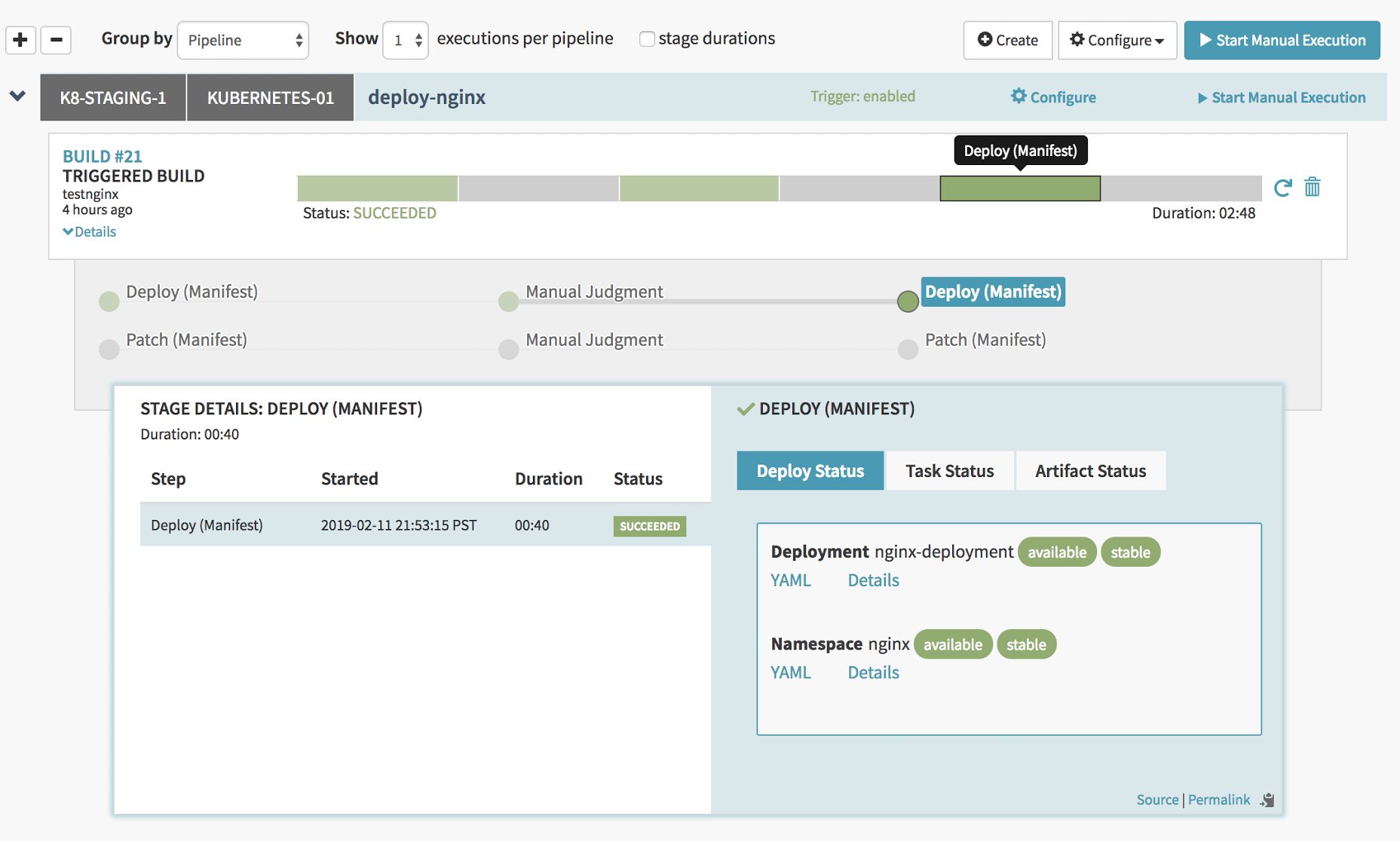 The sections in Grey have been skipped as the ACTION variable did not evaluate “PATCH”. Once you deploy, you can view the current version and also the previous versions under the Infrastructure Section. 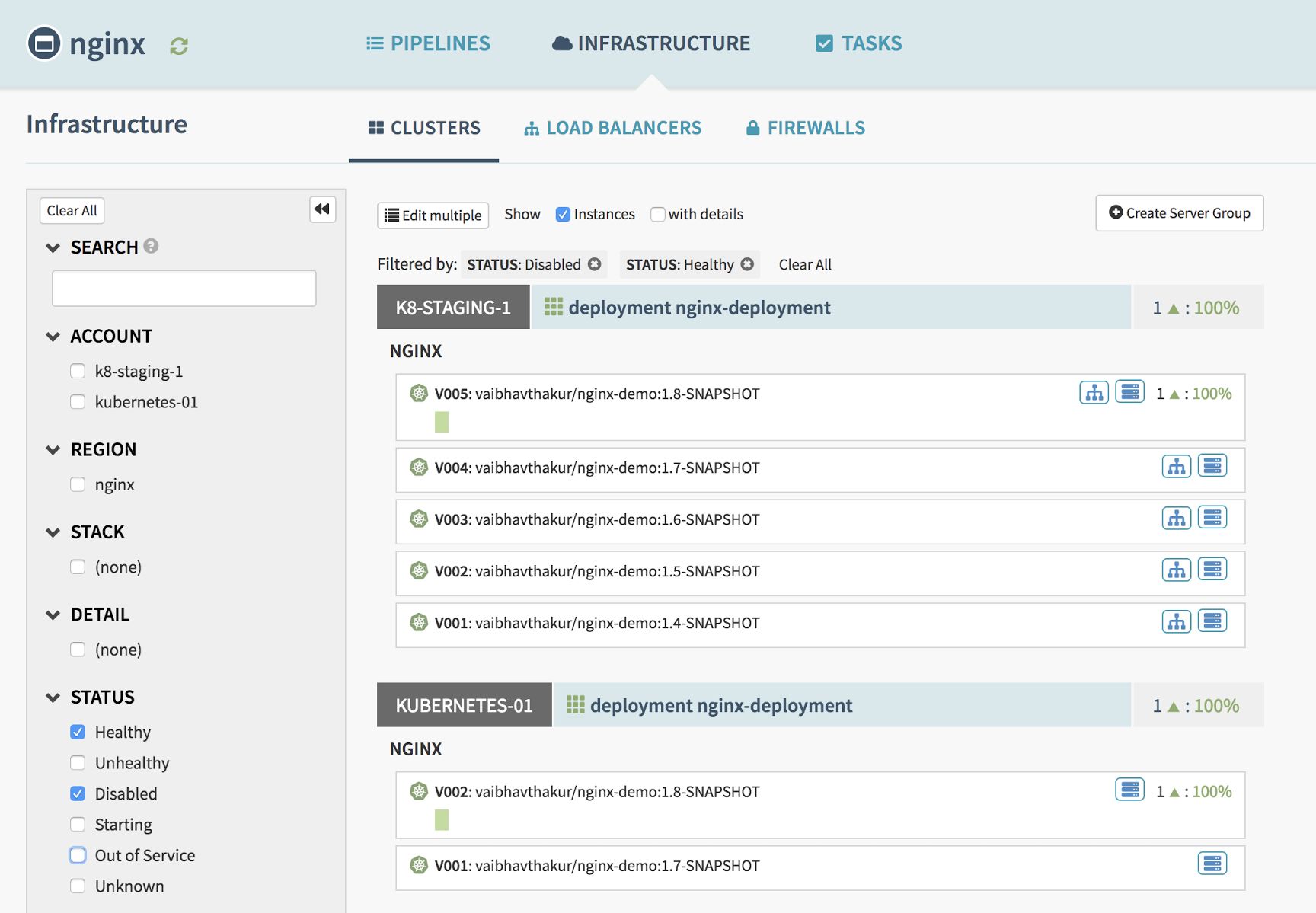 We hope this helps you get started Continuous Delivery to your Kubernetes clusters. Spinnaker is an awesome tool which can deploy easily to multiple environments providing you with a single-pane-of-glass view for all your workloads across different clusters. Feel free to reach out in case you have any questions around the set-up.

This article was originally published on https://appfleet.com/blog/continuous-delivery-pipeline-for-kubernetes-using-spinnaker/.