Tracking the Evolution of UX Through Google's Homepage, Over the Years Google is well know for its minimal design of its homepage, but has it always been this way?

Google became the world’s largest search engine, with over 70% of all searches performed through its search engine.

“Focus on the user and all else will follow. With this in mind, we seek to design experiences that inspire and enlighten our users.”

This post is going to explore how the google homepage has changed over years. Since the homepage can change many times daily, and varies per device and viewport size, I have looked at this with a desktop viewport, and opted to perform comparisons when Google have used their standard logo, no special event logos.

Google actually served content on google.com before this, but it was just a holding page. This is the first instance they started functioning as a search engine. They had the I’m feeling lucky button from the start, which I’ve always personally liked.

Around this time, table based designs were used all over the web, but it looks like Google decided to remove the table underneath and opt for a simple minimal approach. If you compare the 1999 Google homepage to present times, you will notice that actually very little has changed in terms of the way it looks. One of the major changes in 2000 was the introduction of the links to the right of the logo. This is what we would now consider as a nav bar, but back then it was a single image with clickable areas, using a map:

It really is interesting how layouts similar to what we use now, existed back then, and the methods that were used to make them work. Something different appeared in 2001, a link called Google Web Directory, which linked to the page below.

Web directories were very common years ago, if you had a website which you wanted to be indexed by google or other search engines, it was common place to submit a link to you site to one of these types on indexes. In 2002 google split the search engine into categories. The also used what looks like tabs, except this is no single page app! They don’t function as you would expect tabs to work these days, each tab when clicked would re-render the whole page. They were also built up using tables, and only the text clickable: In 2003, the tabs still existed, except this time you were able to click any part of the tab, and not just the text. Google News was also added.

Google News was not minimalistic, and easy on the eyes like the search engine home page was, but I guess this would have been quite difficult to display so much information and keep it minimal. The styling across the home page and news was not consistent also. A new link was added to the homepage, Froogle.

Froogle, a pun on the term “frugal”, was eventually rebranded to Google Product Search and then Google Shopping.

The original name was dropped due to concerns surrounding internationalization, and people not understanding the pun or understanding what the service was actually about. 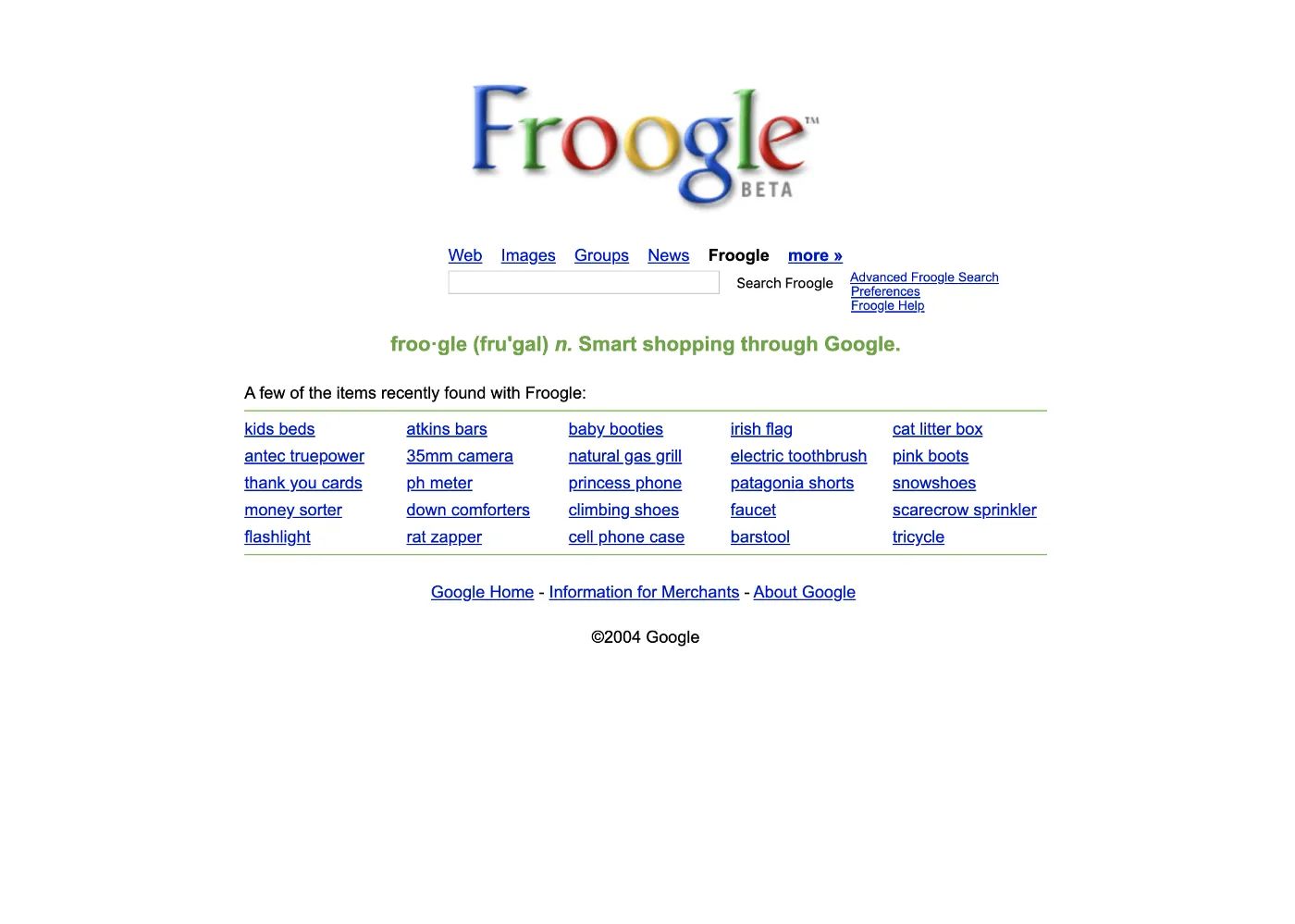 A new link was added to the homepage, Local.

Local is what eventually would be called maps. Unlike some of Google’s other acquisitions, in terms of style, they managed to keep it consistent with the search engine landing page. In 2006, Google stopped displaying the amount of pages it had within its index. Its hard to get a rough size of how large Googles index is, I have seen many quotes which state:

The Google Search index contains hundreds of billions of webpages and is well over 100,000,000 gigabytes in size

2007 — Introduction of Google Maps on homepage The launch of Google Maps was first announced on the Google Blog on February 8, 2005, but it was only in 2007 when it made it onto the homepage of the search engine giant. The tabs are gone, and the nav links at the top of the page are here!

The links were anchors and redirected to other Google applications.

The option to sign in appeared, and so did iGoogle. iGoogle (formerly Google Personalized Homepage) was a customizable Ajax-based start page or personal web portal launched by Google in May 2005. It was discontinued on November 1, 2013

iGoogle allowed you to add widgets to a dashboard, that was personalised to how you wanted it to look. It was pretty cool

In 2009, the homepage looked very similar to pretty much all of 2008, apart from when they replaced the logo with artworks for special occasions!

A few facts about the homepage at this time:

2010 — Finally the shadow behind the logo was reduced

Looking back at the Google homepage, one of the common features was the drop shadow behind the Google logo. In 2010, they reduced the use of this shadow, and although some still remained, it was only a very small amount. Instead of tables, an ordered list was used for the layout. The style of the homepage stayed pretty similar, but they introduced a link to Google+

Google+ was a social network owned and operated by Google. The network was launched on June 28, 2011, in an attempt to challenge other social networks, linking other Google products like Google Drive, Blogger and YouTube. 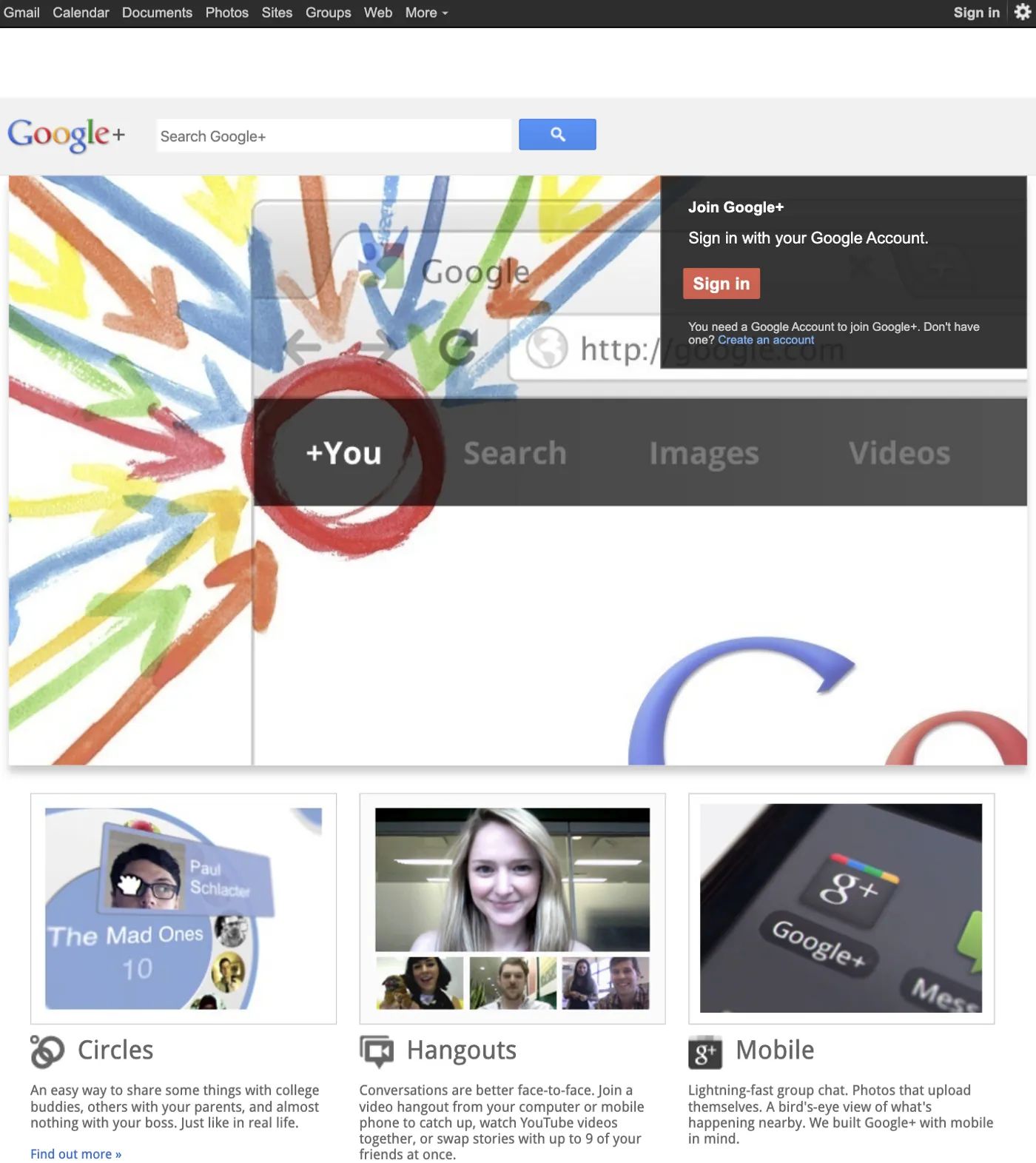 Towards the end of 2013, the flat logo, with no shadow was introduced as the default.

Comparing this to previous logos, it looks cleaner, more modern and easier to read.

2014 — Did someone forget to update the copyright? The style again stayed pretty similar, I guess they were very happy with what they had at this point.

A fun fact thought, is the copyright tag at the bottom of the screen was only updated to the year 2014, half way through December 2013. Pretty much all of 2014 had the copyright year set as 2013 How about a summary of how it looked over the years: A few facts about the homepage at this time: Google must have just been happy with the homepage, its simple, clean and to the point.

2018 — Flat buttons and shadows on input

In 2018 shadows were added onto the input field. This was a very popular style choice at the time In 2019, the shadow input was switched for an input containing rounded corners. This kind of effect is so simple to do with css compared to in the past when developers would try to use different techniques to achieve this, such as images or strange hacks to css.

Here we are, the modern day!

The rounded corners are still here, but this time the shadow is behind the input. Personally, I think it looks pretty awesome.

After 20 years of evolution, what has actually changed?

Not much, really. The way it looks from a design perspective is actually quite similar from 20 years ago. In terms of features, although it looks simple there is quite a lot of functionality underneath!

One thing that has remained consistent is that the world’s most viewed webpage is very small in terms of code size, I guess due to the amount of bandwidth this must consume globally on a daily basis!

The Evolution of The Web as We Know It