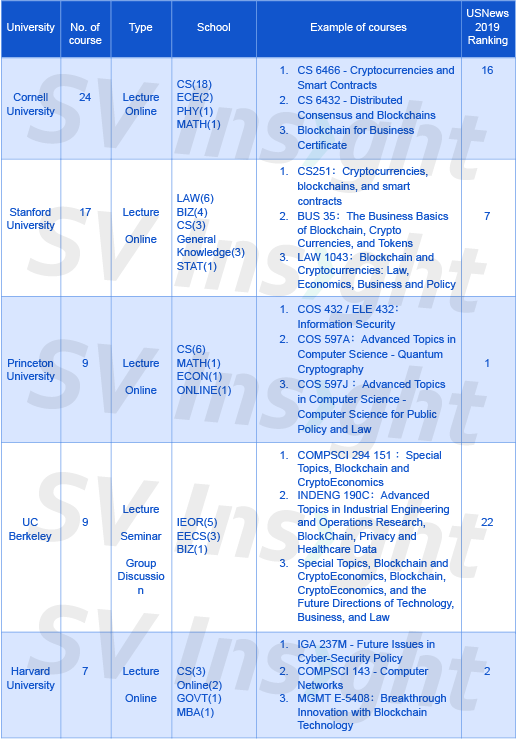 In the past two years, the soaring price of Bitcoin has brought a wave of attention to blockchain technology. In fact, keywords such as Bitcoin, blockchain, and cryptocurrency have become academic spotlights that universities are paying attention to.

In October this year, Coindesk announced the top ten universities in the United States that have opened blockchain courses. These universities are arguably the world’s top universities, including Stanford University, UC Berkeley, Harvard University, and Massachusetts Institute of Technology.

What are the characteristics of the courses offered by these schools? Which colleges are offering related courses? SV Insight Research analyzed the top 30 North American universities from US News 2019 together with Coindesk’s list, to show you in what aspects these colleges are paying attention to blockchain technology and also the feedback from the students.

SV Insight Research used keywords like “Blockchain” and “Crypto” to search the website of the universities’ curriculum. Based on the number of courses offered, Cornell University ranks first in the nation’s universities with 24 courses, followed by 17 courses at Stanford University and then 9 courses at Princeton University and UC Berkeley. For each of the top 10 universities ranked by US News 2019, at least two courses related to blockchain are offered.

As can be seen from the table below, major universities mainly focus on classroom courses, and there are not many universities offering online courses. But schools which do offer online courses, such as Princeton University, started these courses very early. The online course “Bitcoin and Cryptocurrency Technologies” has been in operation since 2015.

From the perspective of faculties that offer courses, the Department of Computer Science or the Engineering school are the main faculties for opening these courses. For example, among the 9 courses at UC Berkeley, 8 courses are offered by the School of Engineering. Similarly, 3 of the 7 blockchain courses at Harvard University are offered by the Department of Computer Science.

But there are exceptions: most of the blockchain courses taught at Stanford University are offered by the law school. At Columbia University, the University of Pennsylvania, and the Massachusetts Institute of Technology, most of the courses are offered by the business school. We can tell that STEM and finance are the two areas most focused on blockchain, while the regulation at the legal and policy levels are also closely following. This can be seen from the courses offered by law school and public policy management school.

Reactions of Students and Industry

What is the students’ reaction to blockchain courses? Ronghui Gu, an Assistant Professor of Computer Science at Columbia University, told SV Insight Research that there are currently four courses at Columbia University which are directly related to blockchain, and many of the students who have come into contact have a strong interest in blockchain and technology industries. In addition to the curriculum, many top-ranking American universities have established various blockchain-related associations that are spontaneously organized by students.

In addition to formal courses, holding academic conferences and forming school-business cooperation has also become a new trend in the exploration of blockchain-related fields.

According to Professor Ronghui Gu, Columbia University and Harvard University have held conferences on blockchains or set up blockchain module on relevant meetings’ agendas. In close cooperation with the industry, Columbia University and the IBM Center for Blockchain and Data Transparency set up two new projects targeted at students and entrepreneurs last month. Professor Gu believes that “with the full support of the Columbia-IBM Center for Blockchain and Data Transparency, blockchain business of various stages will be granted invaluable access to workshops, mentors, and business networks… the entire blockchain community is focusing on building sustainable companies for the future.”

SV Insight Research will keep track of the trends and post more updates in our official account in the future.

If you are interested in learning more on the research ideas and findings, you may want to check out the Blockchain Connect Conference (Academic 2019) on Jan. 11 in San Francisco.

The event is emphasizing education in the blockchain space, which will gather the most authoritative blockchain professors around the world, the public chain projects with the most advanced technology, and technical experts, to discuss the most cutting-edge blockchain academic research, problems, and solutions.

Professors from some of the universities that mentioned above will be presenting at the event, including Dawn Song, Professor at UC Berkeley; Elaine Shi, Associate Professor at Cornell U; Ronghui Gu, Assistant Professor at Columbia U; Raj Jain, Professor at Washington University at St. Louis, just to name a few. You may find the full list of speakers from here.