Top Ten Startup Ecosystems in the World 2019: Flat Earth Ahead

Book a call
with @bernard

We skipped last year, but this year SparkLabs Group is back with our fourth
rankings and report of the Top Ten Startup Ecosystems in the World.

These past few years we have seen the rest of the world catch up a bit
to Silicon Valley, but it is still the clear leader in startup growth and innovation. Almost every city increased its assessment numbers, apart from London, which was affected by Brexit. Even so, London barely maintained the tenth spot, with Berlin hot on its tail.

There was strong movement from Beijing, which pulled away from a prior
tie with Tel Aviv to become the clear second-place leader after Silicon Valley. Stockholm inched past Tel Aviv for third place, while Tel Aviv dropped to fourth.

New York city (NYC) and Shanghai both moved up into a tie for fifth
place. Los Angeles and Seoul are tied for seventh, and Boston and London
remained in their respective prior positions.

The world is truly becoming flatter in terms of innovation and startup development. This year was the first year that we saw the majority of the
startup ecosystems move upward. For years, there has been discussion on how access to information and the transfer of knowledge has helped close the gap between Silicon Valley and the rest of the world, but finally you see more tangible results. From our global deal flow across our nine accelerators and three venture capital funds, we see world-class entrepreneurs in many cities across the globe. The talent is getting better and better, especially in the areas of software development, UI / UX, and product development. The execution gap is shrinking between Silicon Valley and the rest of the world.

The more difficult aspect to transfer is culture. Silicon Valley’s “pay it forward” culture is its secret sauce and differentiator, along with its density of talent and mentors to guide founders. Culture can be learned, and we do see it happening in Beijing and other locations, but this takes much longer than transferring execution know-how.

For our study, we looked at eight factors:

Here are the cumulative scores (out of a total of 80 possible points) for each of the top ten startup cities: 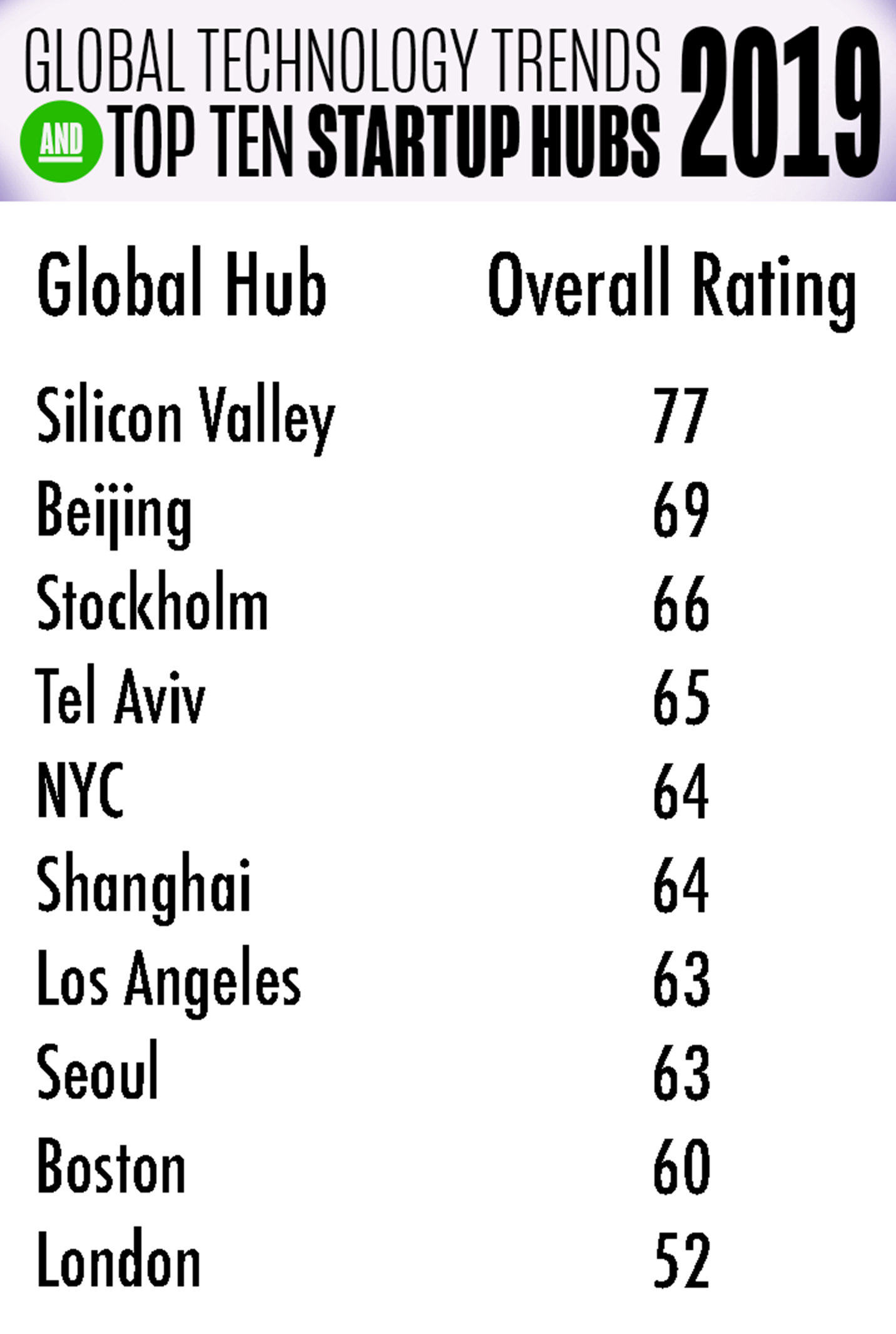 Our analysis is primarily based on venture capital insight and metrics, and our on-the-ground perspective of innovation ecosystems in different parts of the world. This contrasts with other studies, which might rely more on surveys, or are not that knowledgeable about many markets in Asia, or don’t assess startups for actual investment purposes (as our team does).

For example, while Singapore is well known as a strong hub for Fortune 1000 companies to set up their APAC headquarters, its startup activity, investments, and historic exits don’t come close to the activity in Seoul. South Korea has consistently been producing impactful tech companies — starting from the mid-90s, when Nexon (US $12 billion market cap) and Naver (US $23 billion market cap) were founded to today’s unicorns (companies with a valuation of more than US $1 billion) such as Coupang (US $9 billion valuation) and Toss (US $2.2 billion valuation).

So several years ago, our team as a whole wasn’t that interested in investing in Singapore-based startups. There were too many government-backed accelerators, and a lot of startup activity on a road to nowhere since there weren’t many venture capital funds focused on the Series A rounds. But now, our team is bullish on Singapore. The quality of startups has greatly increased, there are more early-stage venture capital funds, and the noise-to-reality ratio has greatly improved. Even a few years ago, Singapore wouldn’t have been in our top 20 — but today it is.

When analyzing a region’s startup ecosystem, factors such as the number of unicorns and exits are just one part of our overall assessment. Even though Beijing is second on our list this year and is also second in its number of unicorns, we've previously had Tel Aviv and Stockholm ranked as number two, with both cities having only single-digit numbers of unicorns.

For our rankings, we also consider macro-trends, such as Asia’s rapidly growing middle class. While the global middle class is expected to grow
from 3 billion to 4.9 billion people by 2030 and two-thirds of that growth will come from Asia.

The overall promise of Asia’s growth and impact on innovation should be met with some reserve due to current geopolitical tensions, which includes the trade wars and corporate espionage. Many manufacturing centers have shifted out of China to Vietnam, and R&D projects have moved to Taiwan and South Korea. It is uncertain how these moves will affect the startup innovation engine in China.

Vietnam and India are two promising markets where venture capitalists are increasingly active. Both have good to great engineering talent and a strong entrepreneurial culture and drive. Vietnam’s angel and venture
capital ecosystem is still far behind Silicon Valley and at least 10 years
behind India’s, but still holds a lot of promise.

On the heels of our top ten list, we see up-and-coming startup ecosystems continuing to develop further, such as Singapore, Chicago, Paris, and others.

Berlin was very close to re-entering the top ten and displacing London, so some on our team are already predicting that Berlin will be back in the top ten next year. Its entrepreneurial energy is palpable and we love many of the founders that we have met there. However, Berlin’s venture capital environment doesn’t seem to match this energy.

Let me know what you think about our rankings — and tell us, what
innovation ecosystems did we miss out on?