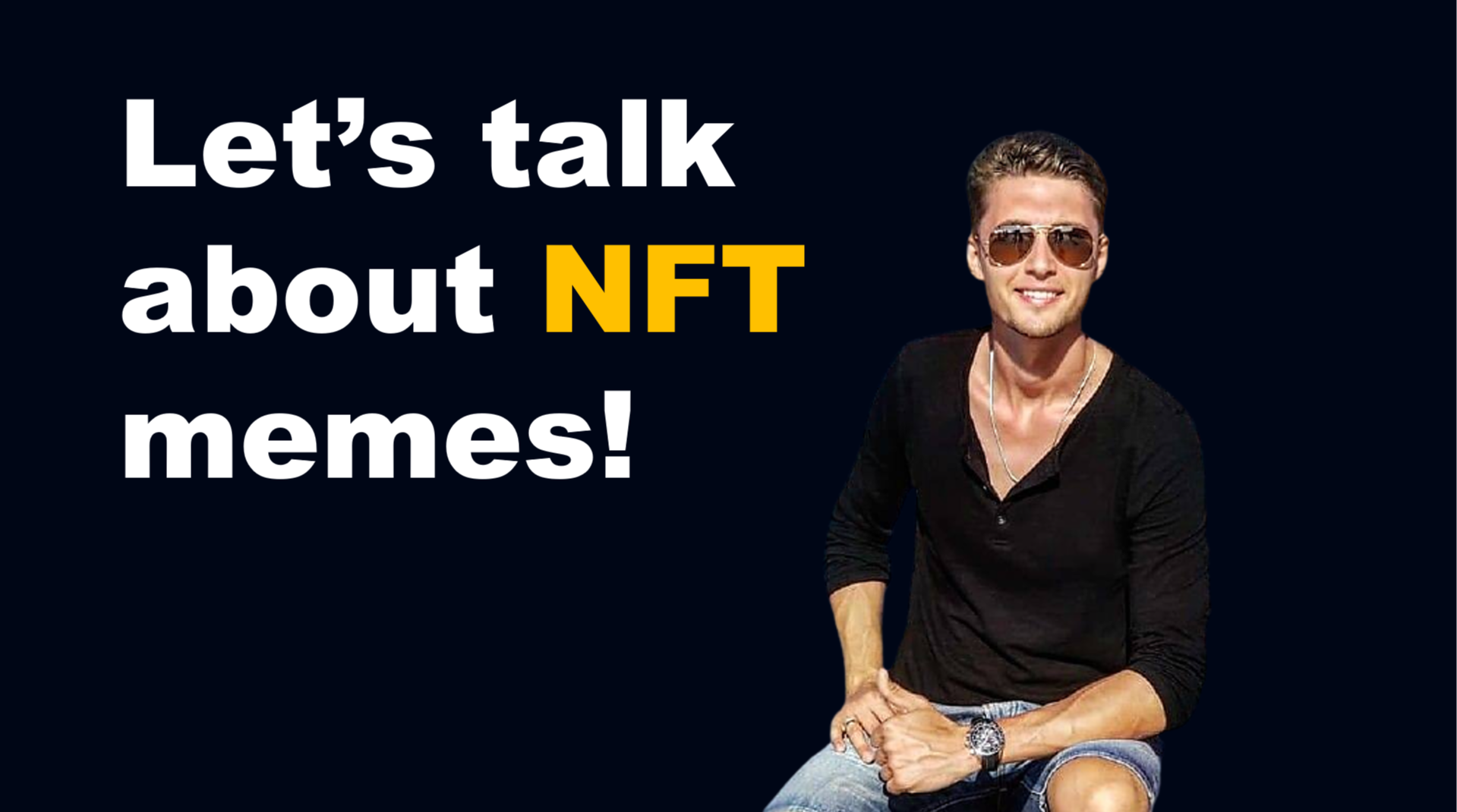 CEO of NFTSTARS.APP and SpaceSwap.app An entrepreneur and founder of a successful IT engineering company.

Disclaimer: This article doesn’t contain any analytics or facts that should be construed as professional insight. It’s just for fun, entertainment, and to provoke nostalgia.

Nowadays, NFTs (non-fungible tokens) are one of the hottest topics in the world of cryptocurrencies. We’ve seen them in numerous headlines. For example, mentions of Crypto Punks, Death Dip, Jack Dorsey’s first tweet, ”Everydays: The First 5000 Days” by Beeple and other projects which have become instant sensations and they have been on the rise in recent months.

It is worth mentioning that the crazy popularity of NFT (which could be paintings, videos, musical works, GIFs, etc.) is met with high public interest and engagement due to the exceptional uniqueness that underpins NFTs.

The interest of millions of people is one of the key factors for success in any sphere. What else attracts public attention on the internet on a global scale? Anything that requires a sense of humor and, of course, memes. But memes come and go, and old favorites find it hard to monetize their former popularity. Nevertheless, in 2021, they had an unexpected and very promising opportunity to make a comeback and be discussed again.

Nostalgia is a wonderful feeling! Do you remember such images as  Disaster Girl, Overly Attached Girlfriend, Scumbag Steve, and Brian Loser? Sure, you’ve heard of them and have probably even shared them on your social networks. You may even have sent them to your friends for a laugh or to describe a situation without the need for any explanation.

Having followed the NFT trend, the heroes of these memes have recently returned from the past. And not for nothing, as you can see, the forgotten stars have already made thousands of dollars by selling their memes for a lot of money.

So, how much do NFT memes cost?

Below, I have analyzed some of the unexpectedly revived images and the current auction prices of the three most popular NFT memes, thanks to Statista (a global platform for business statistics) and the Foundation NFT Marketplace (a platform for artists and collectors that enables them to participate in the new creative economy). 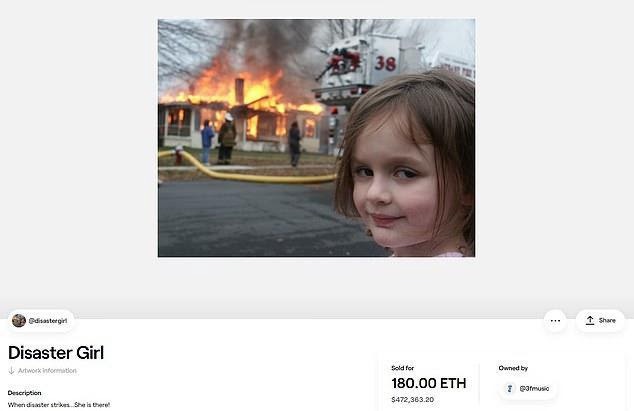 Let’s start the analysis with the most profitable NFT meme of today: Disaster Girl. It seems to me that when one Saturday morning in 2005, Zoe Roth’s (the very girl from the photo) father took a picture of his daughter with a burning house in the background, he had no idea that he’d be launching one of the most iconic memes of the decade or that it would eventually become an NFT.

“A few people have reached out to me and helped me understand what NFTs are”, said Zoe Roth, the main character of the meme, to  Know Your Meme publication in one of her interviews. By the way, Zoe also mentioned that ”this is the ideal meme for 2020 because it passed like it was on fire”.

“My name is Laina, and I am that (awful) face behind the meme. Possessing the authenticated ‘Overly Attached Girlfriend’ in NFT format, you are guaranteed to never be lonely. Never ever” - the quote in the token description on the Foundation platform.

By the way, Laina Morris wasn’t at all excited about the format that made her famous in the first place. The meme appeared after a video was published on YouTube on 6th June 2012. At that time, Laina was participating in a contest that was conducted by Justin Bieber. He was looking for someone to create the song ‘Girlfriend’, to accompany his hit-single ‘Boyfriend’.

Morris’ video went viral, receiving a response from millions of viewers because the fan video was very funny and also because the heroine was singing most of the song without blinking and constantly looking at the camera.

Subsequently, people posted a clipped photo of Laina, adding funny signatures. This is actually what an overly attached girl looks like.

Nevertheless, by selling the NFT meme for 200 ETH, the heroine earned even more than Zoe Roth. Now, this NFT is estimated to be worth approximately $480,000 dollars. 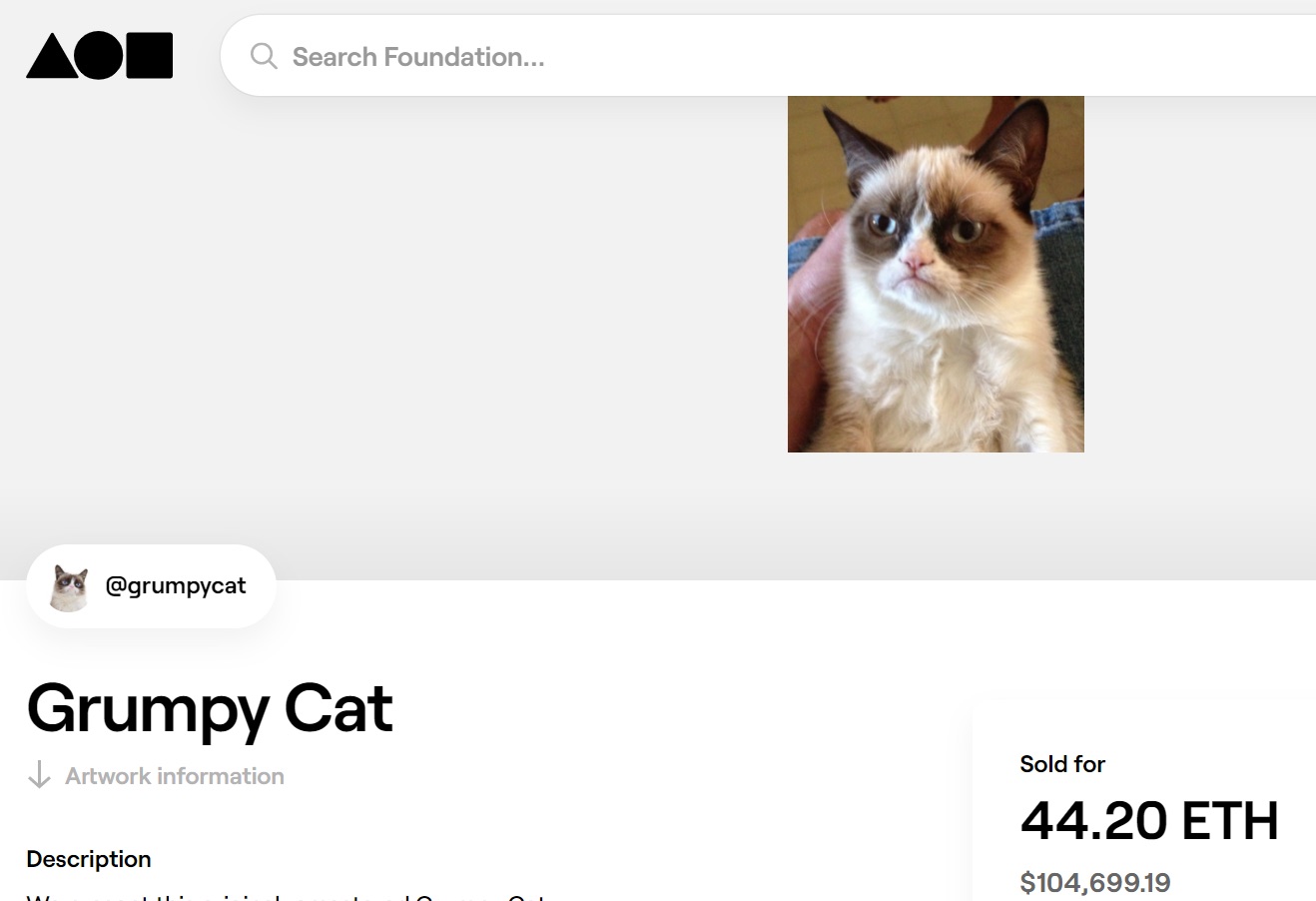 Even the most grumpy cat in the world, whose photo was published on Reddit in 2012 by the brother of the pet’s owner Tabatha Bundesen, found love and recognition in the form of NFT. It was sold on the Foundation marketplace for 44.2 ETH and is estimated to be worth almost $105,000 dollars at the time of writing this article.

Initially, the meme gained insane popularity because it confused many people who could not believe that it was not photoshopped and that the cat really had such a snout. But the owner explained that their pet had an overbite and was born with dwarfism. The internet literally fell in love with the  Grumpy Cat, and in 2013, it was acknowledged as “The Meme of the Year”, according to Webby Award. The image was subsequently forgotten until it was converted into an NFT.

By the way, the description of this NFT on the Foundation website ends with the phrase “Worst NFT Ever”, which perfectly matches the name of the viral image.

The NFT trend has not only become one of the hottest topics in the world of cryptocurrencies, but it has also breathed new life into things that have been forgotten and lost their relevance 10-15 years ago. That is really amazing, isn’t it? Ex-stars of 2005-2012 memes have gained popularity again, due to the fact that they took the opportunity to follow the current year’s trends. People have earned thousands of dollars with once-forgotten photos. It should be noted that some of these heroes are planning to divert some of the money from their NFT sales to charity.

Many collectors have come to think of memes as ‘art’ - unique cultural artifacts or the pop-art of today. This has spurred the development of a new market: the NFT meme market. However, its destiny still remains a mystery. Former stars can sell their NFTs riding on the wave of hype and rekindled popularity while earning interest on the subsequent resale. However, after a couple of months, they may be forgotten again.

The second possible scenario in which events could develop is that the NFT meme exchange, in the long run, gains momentum and real value in the market. Moreover, it’s not just old memes that can be auctioned. Memes that are beginning to gain popularity in 2021 can also be auctioned.

So far, the internet community has been fascinated by the absurdity of NFT memes, fueled by nostalgia and the return of old but well-known characters of funny images, as well as developing a desire to add such strange NFTs to their collections.

...What else are NFTs going to do in the near future? Let’s watch this space!

Related Stories
Subject Matter
NFTs, Metaverses and the Virtual Real-estate by @dankhomenko
#blockchain
Financial NFTs Will be the Real NFT Boom by @elizabeth-levine
#nft-top-story
Decentralized Governance & Governance Tokens by @andrarchy
#decentralization
Secure Sessions in JavaScript: Forking Express-Session to Improve Security by @0x0ece
#cybersecurity
Node.js Vs Flask: Which One Has A Better Performance by @radleylewis
#nodejs
Markdown Support is Nigh by @RichardJohnn
#markdown