Three Trends that Will Define the Future of Marketing

Photo by Rajeshwar Bachu on Unsplash

Predicting the future is oftentimes a foolhardy thing to do.

If you were old enough to understand the internet in the late 90s, you might remember the Y2K scare; a small glitch in the internet matrix that experts said was going to mess things over temporarily. Similarly, technophiles have also been predicting the death of newspapers and magazines since the emergence of computers. But the print media — despite significant decline in readership — have stunned their critics by adapting to the taste of today’s digirati.

Celebrity investor and contrarian thinker Peter Thiel, once famously quipped, “We wanted flying cars, instead we got 140 characters,” taking a dig at the 90’s predictions about technological innovation for the early 2000s that fizzled out in unexpected ways.

Predictions are perhaps most rampant in the marketing realm because we (the marketers) like to assume some level of certainty — even if we are just hypothesizing. It’s become an annual ritual for a majority of marketing teams to come up with a round-up of things that are going to die in the coming year.

Here is the marketoonist’s take on the annual apocalyptic tradition of marketing predictions:

In defense of all marketers, I think it’s a good thing for us to try and get a feel of which way the wind is blowing. The world of marketing runs on experimentation and continued elimination of processes that become invalid after a certain period of time. Therefore, the marketing community is often very quick to jump to conclusions even when our judgment seem sloppy and exaggerated.

As a faithful member of the tribe, I have my own strong opinions about the future of marketing. Now I am no Nostradamus or a marketing seer in any way (at least not yet). And expecting things to happen within 2020 would be short-sighted because trends don’t change by the calendar dates. Therefore, I try not to be prescriptive and myopic about my forecasts. My predictions are largely based on the current marketing norms that are indicative of certain trends and also certain aspects that are timeless. Therefore, I have tried to zoom out and envision these marketing trends to gradually take place over the next 10 years.

With that said, let’s take a closer look at my crystal ball for the future revelations. Abracadabra…!

If TV ads and billboards were the past of marketing, Google is the present. Google is one of the most powerful platforms that helps millions of businesses worldwide market their products to their customers. If, by chance, an online apocalypse were to befall upon us tomorrow and Google ceased to exist, its consequences would be as big as the exodus of Noah’s Ark.

It’s important to understand that Google is not just a tech conglomerate like Apple or Amazon. Google is not just in the business of making software products or fiber optics. If you look closely, you will see that Google is the world’s biggest advertising agency — its biggest source of revenue is online ads. Google aggregates ads to help businesses discover their customers and vice versa.

But the consumer community are somewhat worried by a few worrying trends surrounding Google. The general consumers as well as businesses are coming to a bitter realization that while Google enjoys an absolute monopoly for their consumption needs, it’s not always their best friend.

AngelList CEO and Silicon’s Valley philosopher-at-large Naval Ravikant says that the most powerful people in the world today are people who design algorithms, because they can influence people’s decisions and sway their behaviors towards whatever side they want. And that seems to be true with people working in the Alphabet Inc.

It’s no secret that Google wants to expand their walled garden, just like others in the FAANG club do. So they deliberately shoot down businesses that pose a threat to one of their services and manipulate results that favor them. Google can especially be a femme fatale for you if your business poses some kind of threat to one of its revenue stream.

Take Expedia for example. It’s one of the largest online travel aggregator (OTA) in the world. A few years back, Expedia’s CEO Mark Okerstrom publicly accused Google of trying to kill Expedia’s pages in the search results in order to promote their own flight recommendations. Google is supposedly down-ranking Quora results because it’s posing similar threats to Google’s monopoly of having a ready-answer for every online search query.

Most importantly, a large section of the consumers are riled up about Google’s habit of hoarding users data and reportedly selling it to third-party vendors. Similarly, the U.S. senate and courts in the past have summoned Alphabet Inc’s executives time and gain for accusations against unethical manipulation of algorithms.

Hence, the marketing ecosystem around Google looks a little different based on the present-day zeitgeist sentiments. I am inclined to believe that Google’s monopoly will soon end. It’s hard to imagine a world without Google at this point and it would be a gross exaggeration to say they might be completely obliterated. However, my prediction is that Google will get a few rivals who will take advantage of the distrust consumers have on Google.

For instance, Duck Duck Go is already quite popular among the privacy-loving communities. With its CEO Gabriel Weinberg directly pitching his company’s promise about not snooping on people’s data across the internet forums, they might just be lucky (and prepare) for a widespread adoption. 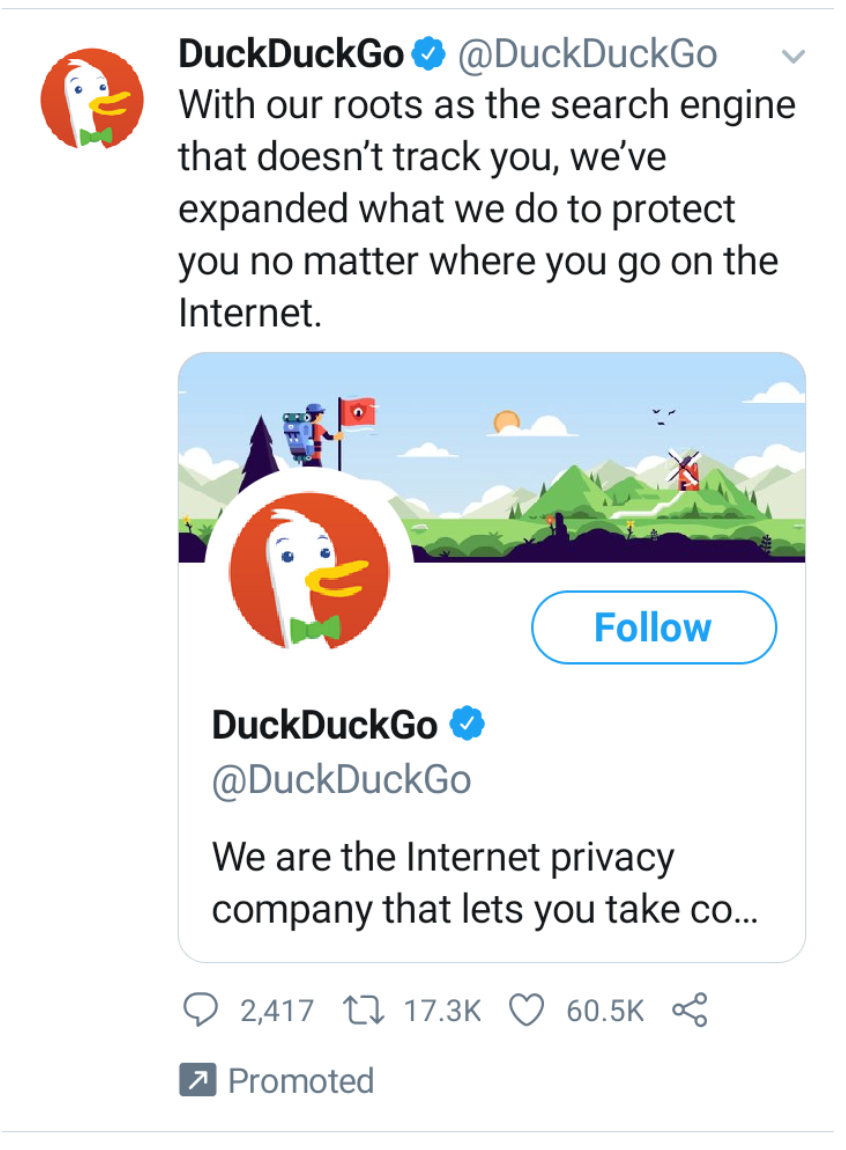 2. The future is probably no marketing

Consumers are already very sensitive and resistant to marketing and sales and this trend is likely going to grow bigger. People will antagonize the traditional marketing for the manipulative and shady practices it involves.

I have to clarify though. When I say the future of marketing is no marketing, I don’t mean marketing as a discipline will cease to exist. I just think this form of marketing is going to live up to its true form, i.e., to bridge businesses with the ideal customers. The marketing that we know traditionally will pivot to become a conversation between business and its consumers.

Given the growing distrust between businesses and consumers, marketing is going to be highly inbound and commoditized in a self-service manner. The current marketing trend already leans towards this direction. In B2B realm, for example, prospects complete 57% of their buyers journey on their own before even getting in touch with a company’s sales team.

To compensate for the lack of such push marketing, businesses will have to come up with better, more genuine ways to communicate the value of their services. Marketing will have to become more conversational and less transactional, more DIY and less cryptic, more niched and less arbitrary. We will talk about the nuances of niche-based marketing in more detail in the next section.

Naturally, the conversational aspect of marketing will also lend ways to accommodate dynamic interactions between business and consumers, powered by the likes of artificial intelligence, voice search, and augmented reality.

This is my favorite prediction of all and I strongly believe this is more likely to happen because we already have proof for it. I am a long-time Redditor and I love the neatly-organized smorgasbord of knowledge that are scattered across the thousands of sub-reddits. Communities like Quora and Stack Overflow are other examples of niche-based communities that are go-to resources for many people who hang out in those watering holes to seek answers to their specific pursuits.

Even Twitter is contemplating to rejig their algorithms to encourage interest-based interactions and counter account-based bias. Topical communities are more helpful because they cater to a limited set of specific interests rather than being a massive motley of unorganized information.

Community marketing will also have direct implications on online search. Imagine dozens of niched-down Hacker News and Cake.co threads emerging at the top of search results when you look for topics such as “best account based marketing software”. We are already seeing instances of this happening in forums such as Product Hunt and Indie Hackers. The conversations in these communities are highly moderated, and thus, cremier and meatier in quality. When done well, marketers will have better chances of reaching the right audience and wooing them. In other words, riches will be in the niches.

Besides the aforementioned trends, the glocal approach of running business will also influence the marketing norms in the coming decade. For example, as we step closer to a gig-based economy, managing and/or collaborating with remote teams from across the world will be a highly sought-after skill for business professionals, including marketers. I think the coming years will also help businesses settle the row between personalization and privacy which has been in a tricky spot for the last decade. Maybe permission-marketing will become the norm because of tighter data and privacy regulations all over the world.

William Gibson, who introduced the concept of cyberpunk through his sci-fi literature, once said, “The future is here. It’s just not widely distributed yet.” And that’s true for most of the future predictions — most of them are already happening around us albeit at a small scale, but they are far from being mainstream. And for all you know, most of them might fall out of fashion before we notice. But hey, if any of these forecasts come through — remember that I told you about it first. 🙂

Lastly, if you liked reading this blog post, I’m sure you will love the 4th episode of our ABM Conversations Podcast.

5 Ways a Musician Can Monetize Their Skills During a Pandemic 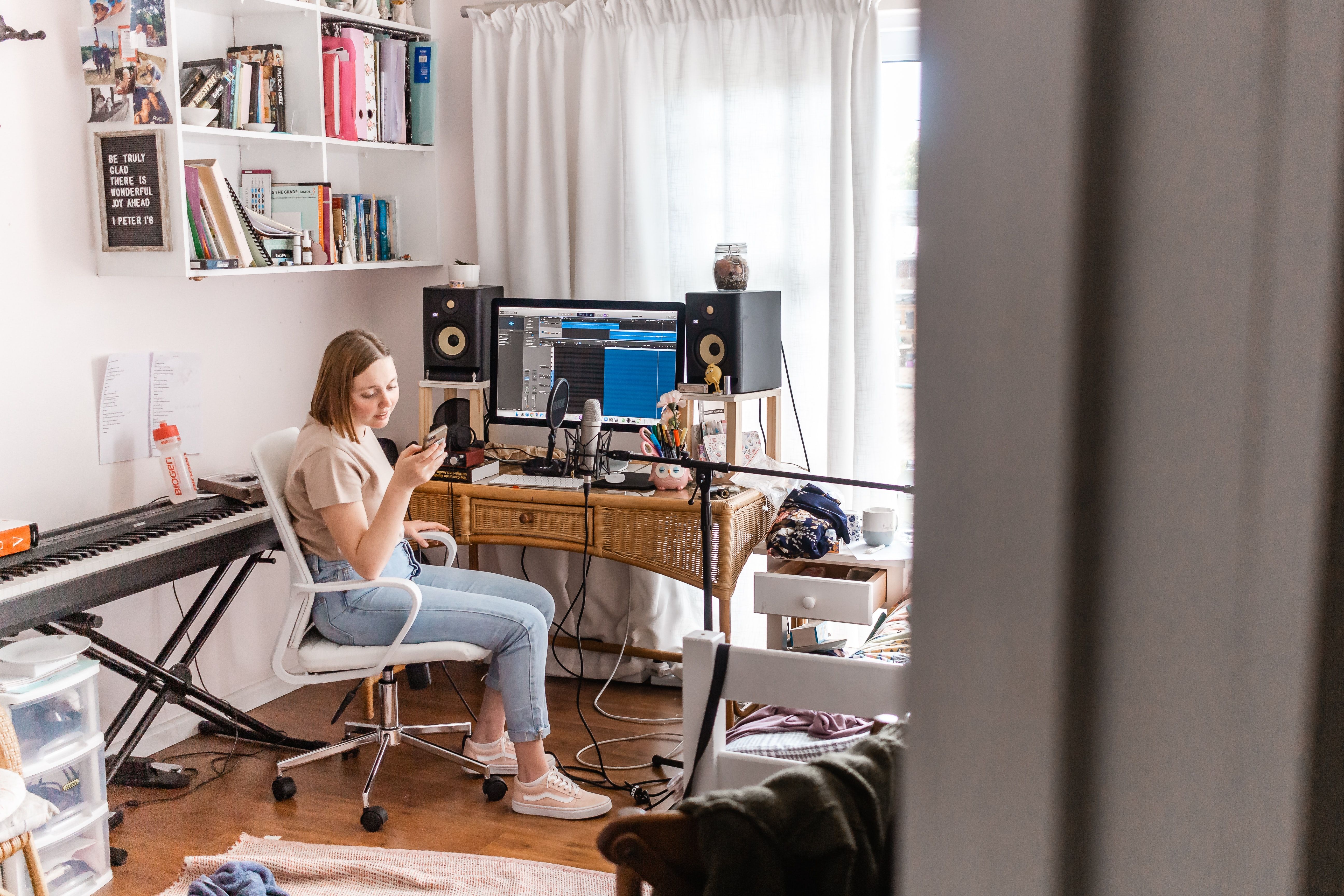