Y Combinator shouldn’t need any presentation, but just in case, let me give a quick intro.

Y Combinator is an American seed accelerator launched in March 2005. It has been used to launch over 2,000 companies including Stripe, Airbnb, Twitch, DoorDash, Coinbase, Instacart, and Dropbox, to name a few.

The combined valuation of the top YC companies was over $155 billion as of October, 2019.

While nowadays Y Combinator includes mentors and coaches coming from the gotha of the startup elite, the mind behind the company is Paul Graham, a very well known tech-guru that I would credit for the contribution he made to Lisp language and for the launch of Hacker News, among all his other achievements.

I was tracking down Y Combinator Startup School (YCSS) for a couple of years, and well, this time was the right one. The 8-week online course for startups is totally free, and from 2019 it’s held twice a year, so it’s not so hard to get a spot. All you need is to send some information about yourself and your project and grant some commitment. There aren’t specific milestones to pass, like exams or things like that but you need to attend a number of peer reviews to graduate.

In the end, the value of this course it’s mostly up to yourself: if you’re willing to study the lectures, take parte in the forums and AMA sesh, interact with other students and attend the video lessons, it’s definitely worth your time. Otherwise, it’s no more useful than scrolling a  Reddit thread (/r/startups).

The YCSS is structured in an eight-week time frame. Each week you have to submit your goals for the week and the main challenges you are facing. This is the base for the bi-weekly peer review. Then there are the lectures, videos and live sessions with the coaches.

Y Combinator even created a dashboard where you can handle the totality of the course, with links to forums, special deals, Telegram group chat, video lessons, Q&A, and more. A video conference room is integrated as well, so you don't need any other tool than a laptop with an internet connection. 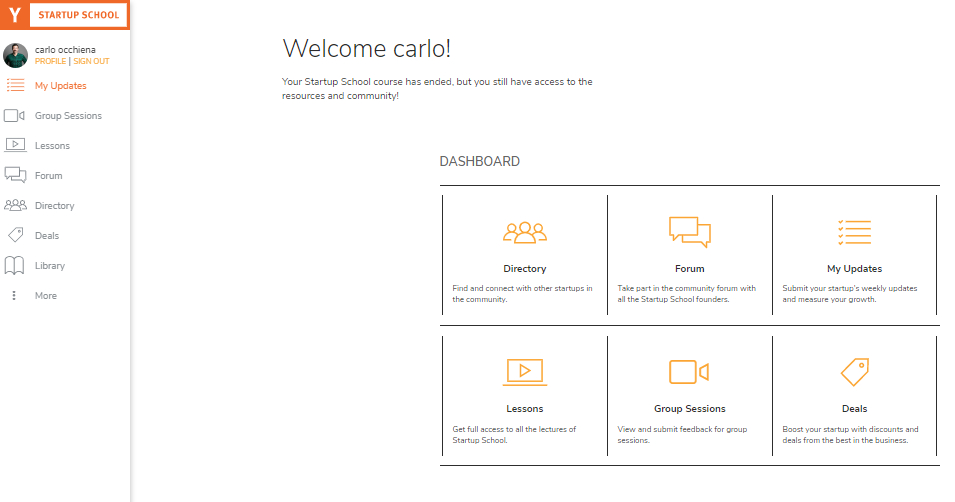 I liked the YCSS pretty much, considering that it’s a free program. It also provides a good insight over Y Combinator method and the approach of their mentors.

I was positively impressed by diversity within the classes: participants were from Indonesia, Thailand, India, North Africa, Russia, of course a lot were from the US West Coast (be ready to attend video confo at wee hours of the morning). And no matter what part of the world you come from, what background you have, what project you are working on: for better or worse we are all facing the same problems, with the same difficulties and constraints.

As a side comment, I would not have minded to have a little bit of challenges here and there. A sort of final examination is something that is missing at the moment.

But let’s jump back to the purpose of this post. What the hell did I learn during this process? I had many A-HA moments, but let me sum up my 10 most important takes.

Talking to your users is essential. Perhaps the most important thing you should do. You would never ever make a product that nobody wants. Worst, to spend billions of marketing to push it down the customers’ throat.

As you may know, having no market is still the first reason startups fail, accounting for more than 40% of the deaths. YCSS program is stressing a lot on that point, even asking you how many surveys you made and what feedback you got from your customers on a weekly basis.

You have to become a problem seeker. You need to understand people's real problems. Don’t look for loonshot solutions addressing nobody issues.

If this list would had to be a single bullet point, it would have been this one.

2. It’s not your customers’ job to give you solutions:

A common mistake I see almost everyday it’s asking people what they want, instead of asking them which problems they have.

“If I had asked people what they wanted, they would have said faster horses”, as Henry Ford said.

It's not up to your users to tell you what they want, they just have to tell you their problems. Then it’s your job to find solutions for them. You are the product owner, not them.

3. No problem is too big to be a show-stopper:

No problem is too big to have no workaround around it. During the peer reviews sessions, we discussed very different problems and issues each one of us was having at the time. And believe me, there were some hella big problems coming out. But the mood was always very good and positive. Bigger problems just need bigger workarounds. And that’s good. Let’s keep it going.

Don’t even think about spending half a year to develop a finite product. MVP, Minimum Viable Products, is your to-go word.

Start small, test, develop, implement, repeat. Don’t waste away your money and your time to work on a product nobody wants or that would take so long to develop that, once it gets to the market, it would be already obsolete.

Ship early, ship often, ship no-f*ckin-matter what. Design short product sprints, with frequent deploy. If it takes you six months to get to your first deployment in the production environment, your startup is probably going to be dead before you  get another chance to launch.

6. Forget about that “it doesn’t scale” thing:

Y Combinator mentors told us this little story: it was rather common to find post-MBA folks who used to discard every single startup pitch they were evaluating by commenting “well, it doesn’t scale”.

As a startup in its early stage, please, don’t deal with that.

Ok your idea doesn't scale. Fine with that. It’s the starting point for everybody. First validate the concept, then worry about scaling your business. Some of the most valuable, and, well, scalable, startups on the market, started by doing things by hands or mimicking features they still had not. Who cares about that. In a world where the most ground-breaking tech is just next door, there's plenty of room to get your products to scale later on.

7. “Good product instincts” is a trap:

Get rid of the  “I’m trusting my guts” BS asap.

Nobody has it, and Steve Jobs is dead.

Measure all your experiments and don’t rely on “instinct”, “guts”, or “good taste”. You may be surprised by the results, discovering that the ugly-looking template is converting way more than the polished, trendy one, because, well, the former has a better CTA.

Company culture is often ignored by startups. The mood is like, “money first, culture later”.

But well, there is no “later”. You have to set up culture in the very early stage of your company. It’s easy to share a culture statement among ten people, but then try to do it when the company grows to one hundred employees. Culture should work as a de-facto guideline: this is how we behave when there aren't further rules around. And culture should guide you in hiring your first employee, getting your first customer, dealing with product issues, and so on.

Remember how much the simple “don’t be evil” quote meant to Google employees, driving their business and growth strategies for almost a decade. So don’t forget about culture and settle it down as soon as possible.

You can’t say “I am a good leader”. That's something other people have to say. Do you want to find who’s a true leader? Ask the people around them, who they work with, but also their friends, the bartender where they have their coffee, their neighbors. Leadership is not something you turn on or off when you enter the office. And, by the same means, be careful when someone is claiming out loud their leadership skills.

This was from YC President Geoff Ralston’s parting advice, during the last lesson of the course. I loved that one. I never bought into the “creating startups is the coolest thing in the world” adage. Creating a biz from scratches is hard, it’s often painful.

Things can go disastrously wrong in a startup and the founders feel sadder and sadder. And sadness leads to inaction. It leads to apathy. It leads to depression.  Don't do that. Don't get sad. Go, do, write code. Talk to users. Make your product better. Always make forward progress in spite of sadness, anger, frustration. In the end it’s not the best that succeed, but the more resilient and prone to rise up failure after failure.

And help others, too. If you see someone in trouble, another entrepreneur in distress, reach out to them.

We live in an open ecosystem, let it thrive.

Well, that’s it. Hopefully you found some inspiration and hint in my story. At least now you know a little bit better what this YCSS is about and around which pillars the course is built.

If there’s something you’d like to discuss further, write me in the comments!

Get back to work now. And don’t quit!