I Connect The Dots

"I just wanted to thank you, thank you so much." she said, standing there smiling. Her name? Ridha Mirza, Babson student and beyond. Mirza was one of many, many bright stars shining in the auditorium that Saturday afternoon. Their differentiators were decidedly more diverse than simple technical competency, blockchain familiarity, and understanding of what a hackathon and pitch competition are.

Theirs was a natural curiosity, a fascination with the idea of building on the blockchain. Some had arrived so prepared that it was a source of fresh surprise to my fellow judges, mentors and I. Even Francois, ever the endearing pessimist, had to admit that some of them were "interesting" which earned him more than a few smiles several hours later in our "secret chambers" during deliberation.

Now you might be sitting there, several questions on deck, such as: "Who the bloody hell are you? What's this Tezos stuff in the headline? Come on, tell us, tell us!" and like any good journalist I'll not leave you wanting for actionable intelligence. My name is Steve Vilkas and, in addition to being a somewhat humble scribe, I'm a newly minted Tezonian - a supporter of Tezos and this article is my Proof-of-Stake on several counts.

It All Began On The Envoy

Bit of background may be in order - origin story if you will. I have been a technologist since my father first had me hold the screws in assembling a desktop or pay close attention to his MSDOS creations. I'm by no means a "crack shot" when it comes to programming, and am a simple novice on several subjects, but there's one thing which both I and this article's main purpose have in common.

A mission to promote the potential of technology, especially blockchain technology and that of Tezos as the vanguard because of how technology can function as more than something interesting. It can be, it has proven to be in fact simply extraordinary when utilized to its fullest potential.

Think of the printing press, the steam engine, and consider now the latest advances of our very own era. Blockchain: It's certainly one of those. Though admittedly a few may argue in favour of breaking its dense descriptions down, the fact undeniably remains: Blockchain is going to be one of those principal drivers of progress, of change which some may embrace and others spurn but still it comes.

These subjects and more were being discussed on the 1st of July 2019, on the rooftop of Boston's Envoy Hotel where the local Tezos Commons Chapter had gathered for a celebration to celebrate their one year anniversary. Ken Garofalo, Chapter President, affable and intelligent, turned to me that late afternoon and said: "Hey there, how are you? Pleasure to meet you. My name's Ken...." and from that point on we became the finest friends.

Leveraging my skills as scribe and connector, I began to offer assistance and strategies to Ken which led us, more often than not, into collaborations and opportunities of all sorts - from prezos to panels, from mixers to brainstorm sessions all over town.

The Pitch, Why, It'll Be Something For Sure

A contemporary of mine, --R, says of event planning: "It's mostly bullshit except if you go about it intentionally. How will you add value? How will you spend the investment of time which the attendees are giving you? Don't simply stuff people in a room with a bunch of booze, crappy music and a nebulous theme to try and figure out.". Fortunately Ken Garofalo had, for the longest time, been a visionary in this sense. He was ready.

Garofalo was ready to do something different. One day he came to see me at District Hall and proposed the concept of what was to become the Pitch Competition itself. I had my reservations, he had his, still we committed to give it the best chance as possible. Even in the execution in terms of operational planning and organizational coordination, we were living the philosophical principles and core values of Tezos itself.

Every meeting, every chart, every bloody debriefing from A to Z accounted for every variable. The team grew, the locations first expanded before being shrunk for the sake of consolidation and concentration, and then, at last we were as ready as Ken's smile was sparkling on that bright Saturday morning. 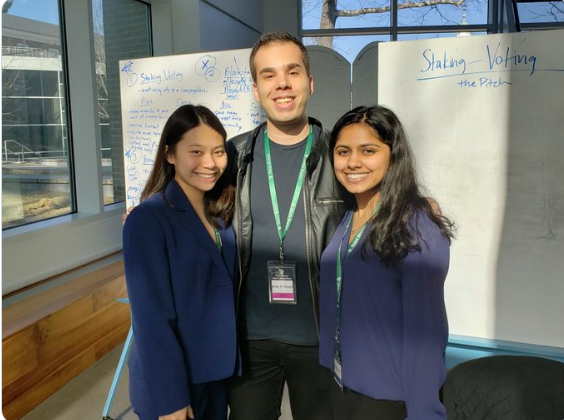 This is Hough We Do It

Over two dozen teams, close to forty individuals in attendance, and energy closely approaching the levels at The Hadron Collider (I may have taken a bit of poetic license with the last one). Make note of the friendly face in the center of the above photograph. That there is Brian Hough, who more than did his bit to lend success to our event.

He was no mere competitor - Hough had come to help, to learn, in short, Hough understood the big picture (and Hao, one of my fellow judges, noted as much from him, from Mirza, from many in the ranks). I suppose this is one of the most important elements of observation which I wish to make clear in this article:

These Babson students, inflamed with fascination and a solidarity of spirit around trying to become better educated and cognizant on Tezos, jumped right in without the slightest hesitation and presented projects which ranged in nature from Investing, Insurance, and Social Impact with several more besides.

All the while, Hough was leaping from here to there along with Dan Edlebeck, both of them doing whatever they could to ensure our compeititon was being covered by as many lenses as could capture and as many channels as could provide coverage. I should also at this time accredit Molly Meung-Garofalo of CryptoLiveLeak and Oana Manolache of Introvoke for their role in the successful promotion of the event.

All hands were on deck, and so the voyage proved a complete success in terms of fulfilling its expectations and even, it could very well be said, for attracting other net positives in the final analysis also.

Mentors, Connections & More Made All The Difference

Ken had been adamant: "Steve, we need to be very intentional about this. We need to reach out purposefully my friend, and open those doors." and smiling much the same as Ridha Mirza would later do with me, I nodded and set about my work.

I first looked to Victoria Yampolsky, whose reputation within the startup ecosystem especially of the Northeastern United States is based on credibility, domain expertise, and an unmistakable desire to help early-stage entrepreneurs validate and build their startups on solid financial foundations.

Then to Ed Brzychcy, Founder of Bluecord Management. An Army Veteran and true-blue mentor, who develops within individuals all the skills and strategies which they need to lead. We had Steve Supitux from Clove Crypto, Steve Derezinski with his immense intelligence, and we missed James Moreau who had been scheduled to sit with us. The Crypto Dog rounded out our ruff edges, and at the end of it all we knew we'd barked up the right tree - quite unlike my sense of humour.

We'd made connections, we'd found resonance across several different sources. In short - we'd lived what we believed, and matched reality to ideology...we'd proven the case for technology as more than just the bells and whistles which some still, mistakenly to be sure, consider it to be.

So ends my story, with a concluding statement which reverberates from the title to the final period: Tezos is what it is not just because it's proving itself to be a currency of ever-increasing value and stability, but because its stable value is also built upon community.

Related Stories
Subject Matter
Join Free TON Community and Participate Contests! by @Free TON
#promoted
A Crypto Journalist in This Day and Age by @ADotConnector
#women-in-blockchain
Top 10 List of Nintendo Consoles Ranked by Sales by @joseh
#nintendo
Introduction to Gamevertising by @max-albert
#game-development
How Starlink is Disrupting the Internet by @khunshan
#starlink
Front-End Developers And Designers: Bridging The Void by @shepelev
#front-end-development
Life After ICO: 4 New Ways to Launch a Token by @serkhitrov
#ieo