Should You Become a Programmer ?? 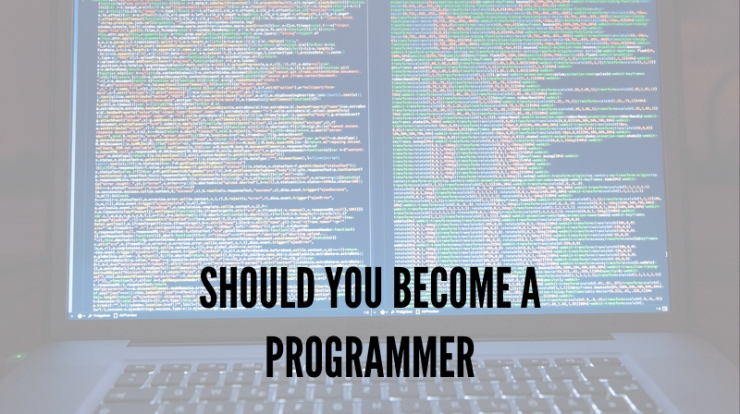 A lot of people are thinking about becoming programmers. Some, because they just like computers in general and think that coding should be a fun challenge for them, others maybe because they’ve heard that programmers have very high paying jobs. Either way, most people don’t know what are they going to work at a job as a programmer. Some think that it will be like in movies.

So, the primary reason why I’ve made this article is to show people all the positive and negative things that they’ll need to go through as programmers. So, after this article, ask yourself if this is something you really want to do. Let’s get started.

A lot of people think that programmers make a ton of money. While that is true in some cases, the average programmer makes around $70,297 per year according to Indeed. Don’t get me wrong, that’s not a small amount of money, but it’s not as much as people think. Of course, this is just an average, there are programmers who are making 1 million and the ones who are making $40,000 per year.

Also, this largely depends on where you live. A programmer is Silicon Valey makes much more than this, but the cost of living is much higher. The one that you can do is to work remotely. That way you can get the same amount of money with a cost of living being much less.

Not All Programmers Are Millionaires

A lot of people think that if they know how to code, they will build next Instagram or Google and become rich. The skill that makes the founders of these tech companies billionaires are not their coding abilities, that skill is marketing and understanding what people want, the timing is also important. Every programmer can build next Instagram, but not every programmer is rich.

If your primary goal is to get rich, you should rather learn how marketing and selling works, come up with some unique idea, and you can hire some programmer to do the coding for you. This way will save you a lot more time and you’ll have almost the same results. Take Steve Jobs as an example. He didn’t know how to code, but he was a marketing genius. And if you ask people today what they think who founded Apple, most of them would probably say Steve Jobs. Only a few people would know for Steve Wozniak, who was a co-founder and did the coding part.

Quick pause. If you like to get information through articles, but you sometimes just don’t have time to sit down and read them or you just don’t like reading, there is a solution to your problem. WhistleX is a free browser extension that reads articles for you. You just need to press the play button and that’s it. It can be used on any news website, blog, or any similar website. It can be also used on a phone, check instructions here. Let’s get back to programming.

You Never Know Everything

As a programmer, you’ll be constantly learning, and by learning I mean, constantly getting stuck and not knowing what to do. Technology changes rapidly and the skills that were valuable 5 years ago are no valuable any more. That’s one of the reasons why college isn’t useful.

Programming Is Not What People Think

The topic that is heavily associated with that you never know everything is that programming isn’t what people think. When I was starting, I taught that programming must be very fun because computers were fun, so programming must be too. I taught that I’ll get to play at the computer all day. But it doesn’t go like that. Coding is just another type of labor, just a mental one. The type of labor where you’re constantly getting stuck and not knowing what to do.

One more thing is that most of the people start thinking about making games, but get disappointed when they find out that to make one of the games that most people play it takes multiple years to multiple hundred people. So, if your goal is to make a game, it’s gonna be very hard.

If you still want to become a programmer, here are a couple of courses which I recommend:

So, programming is not what most people think, and I hope that after you’ve read this article that you’ll think twice if you should become a programmer.

I hope that I have helped you with this article. If you liked this article, make sure to share it with your friends.

Also, if you think that I have missed something or you have any other questions, be sure to post your questions in the comments or send me an email at info@codequickie.com, I will be happy to answer them.