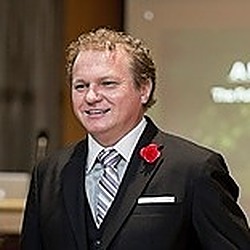 Shortly after the United States assassinated influential Iranian military leader Major General Qassem Soleimani in Baghdad, the price of bitcoin spiked alongside gold and crude oil. Bitcoin’s price leap was especially significant because gold and crude oil are considered safe havens that tend to attract investment in the wake of economically destabilizing events like the strike against Soleimani in Iraq.

Crypto thought leader and previous long/short equities portfolio manager Travis Kling articulated in a recent episode of “The Breakdown with NLW” podcast that correlation with other haven assets does not mean that bitcoin is definitely a haven asset. That said, Kling’s observation of the facts posted on Twitter has certainly given rise to speculation. 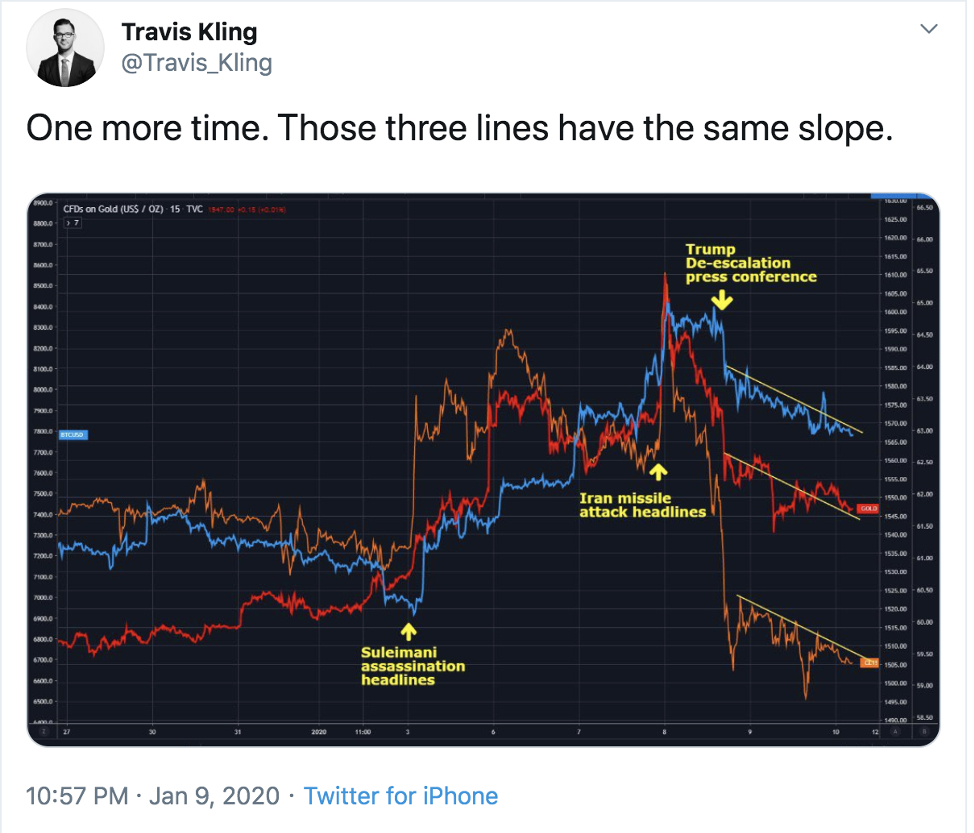 Graphic posted by Travis Kling on Twitter showing the price of safe haven assets gold (red) and crude oil (orange) alongside bitcoin (blue).
The graph shows that all three assets, gold, crude oil, and bitcoin, reacted almost immediately to the destabilizing events in Iraq. Prices rose after Soleimani’s assassination and again after Iran’s missile attack against US military bases in Iraq. When President Trump took steps to de-escalate the situation in a televised address, prices dropped.
Though correlation does not equate to causation, it’s safe to deduce from the history of high bitcoin adoption in areas experiencing economic and political strife, such as Venezuela, Hong Kong, and Argentina, that individuals are prone to seek out bitcoin in times of high sovereign currency volatility. The paradox is that bitcoin itself is highly volatile.

Bitcoin Almost a Haven Currency, But Not Quite

Digital currency management firm, Grayscale expressed that bitcoin is the fifth most popular asset among millennial investors, partly because “younger people consider assets like Bitcoin to be a safe haven.” This view stems from the facts of Bitcoin’s construction. As the first peer-to-peer digital cash system, Bitcoin transactions do not depend on validation from any centralized third-party entity. Traditionally, these validating entities have been governments and banks.
The inextricable link between fiat currencies and their issuing governments means that fiat currencies are vulnerable to destabilizing actions taken by said governments. In a CNN interview, Travis Kling described bitcoin as “a hedge against monetary and fiscal responsibility from central banks and governments globally.” The reality is that bitcoin is the most well-known alternative to fiat-driven assets, but it is not a truly safe safe haven, given its volatility.

What can be deduced from these observations is not that bitcoin is a haven currency, but that the world is in desperate need of one. Unlike bitcoin, a viable haven currency should be actually stable. Like bitcoin, it should be borderless, censorship resistant, and invulnerable to the economic impacts resulting from war and shifting political dynamics.

Stablecoins Pave the Way to a Better Haven Currency

The concept of stablecoins arose from the need for a stable store of value that retains the attractive qualities of cryptocurrencies in terms of its capacity for use in cross-border transactions, transparency, and resistance from censorship.

Many of the most well-known stablecoins are pegged to fiat currencies and so cannot be viable safe haven assets. Other stablecoins are tied to commodities like gold or oil, but the prices of these long-term investment staples are subject to market fluctuations and are therefore difficult to predict.

A haven currency that meets the needs of vulnerable populations seeking to safeguard their value is likely to be algorithmic in design, following the model put forth by Robert Sams in his seminal paper on seigniorage shares. This system mirrors the type of supply and demand controls enacted by the federal reserve to respond to inflation and economic slowdowns.
Beyond automated controls to keep the stablecoin’s value at its peg, the peg itself must be based on something actually stable.

Fiat currencies are not a viable option, given their inseparable ties to issuing governments. Though gold and crude oil are also considered to be safe haven assets because of their generally low volatility, their values will still shift in unpredictable ways based on market changes.

To achieve a non-flationary value peg that is resistant to market impacts, the peg should not be based on other currencies, commodities, or baskets thereof, but on a measure with a historical track record for predictability and sustainability over time.
Disclaimer: Anchor is an algorithmic stablecoin based on the sustainable and predictable growth trend of the global economy. The Author is the CEO at Anchor.

Fiat-Pegged Stablecoins as a Stepping Stone to the Next-Generation ... 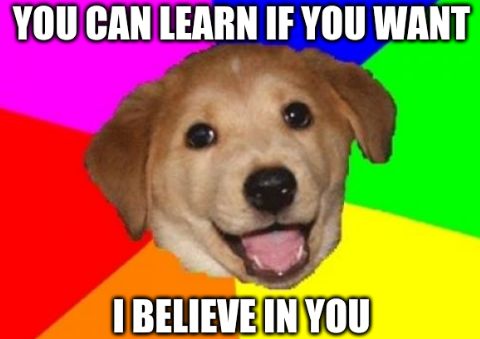 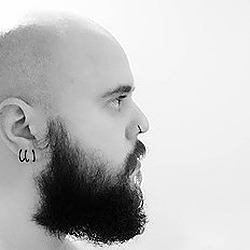