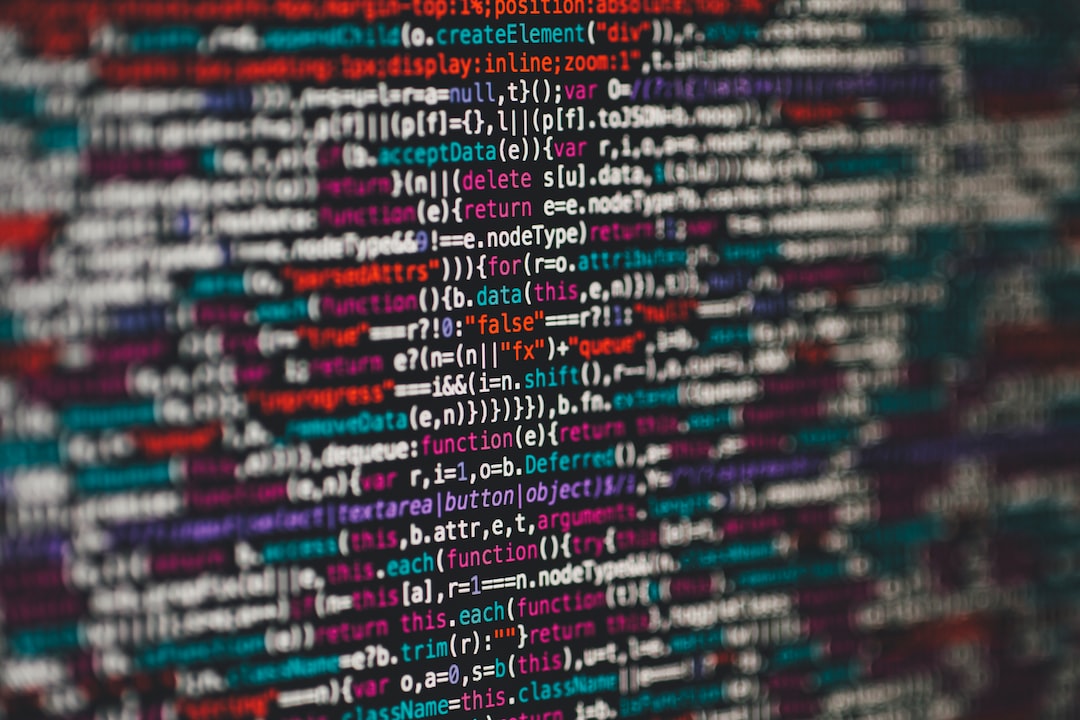 In a programming language, the type system gives you the foundation in representing data in your programs and implementing logic. It provides the means of creating abstractions to the solutions you are providing. Some programming languages will provide you the most basic functionality, while others will give you in-built functionality for specialized domains, such as data frames for data processing jobs, as found in languages such as Python and R, and vectors and complex numbers for numerical computing as seen in Matlab and Octave.

But how about in the domain of networked-services programming? This is not an area that has been ventured into frequently. In the current development landscape, more and more functionality is available in the cloud. This transforms our implementation of business logic into mostly service integration through the network. Basically, our application logic and integration code are converging.

There will no longer be heavy-weight centralized ESBs intercepting all application requests to make integration decisions elsewhere, but rather, the endpoints themselves have got smarter. This inversion of responsibility provides much more power and control to the developer and ultimately results in increased productivity and reduced release cycle times.

As the developer is provided with the added responsibility of working with networked-resources in their code, it is critical that the programming language itself aids in this operation. This will involve aspects such as network communication resiliency, discovery, data mapping, transformation, and more.

Having an effective type system can greatly help in the core operations of these features. Ballerina is a programming language that was built ground-up with these requirements in mind. It has a network-friendly type system that helps the developer a great deal in the domain of network-distributed programming. In the following sections, we will take a look at this in detail.

Ballerina is a statically typed language, which means, all the types of variables are resolved at compile-time. Languages such as Javascript and Python are dynamically typed, where its variables do not have a specific type assigned, but rather, any value can be assigned to the variables. Java and C++ are statically typed, where similar to Ballerina, its types are checked at compile-time and only compatible values can be assigned. Statically typed languages are generally more robust, easier to debug, and aids in creating better tooling for the language. This comes as a tradeoff between the flexibility for a developer vs safety. Ballerina has chosen the path of code safety and better productivity in the long run.

This is comparable to references in Java, or pointers in C++. Basic simple types in Ballerina, such as

, , and , do not have a storage identity and their values are directly stored in the variables.

Let’s create some values of the above DoorState record type.

The three variables above —

, , and — all represent a single state of the door being closed and locked. But nonetheless, we have created three different values where each of the variables is stored in three distinct memory references. In this manner, we can actually create an infinite number of values with the type.

If we ignore the storage identity of the above values, we simply get the representation of the data it has, which is

. This is a single shape of the type . In this way, there are four possible shapes for . These four shapes are represented in the values referenced in the following variables.

A type in Ballerina represents a set of the possible shapes it can have. Any value which belongs to either of the above four shapes will be considered to be of the type 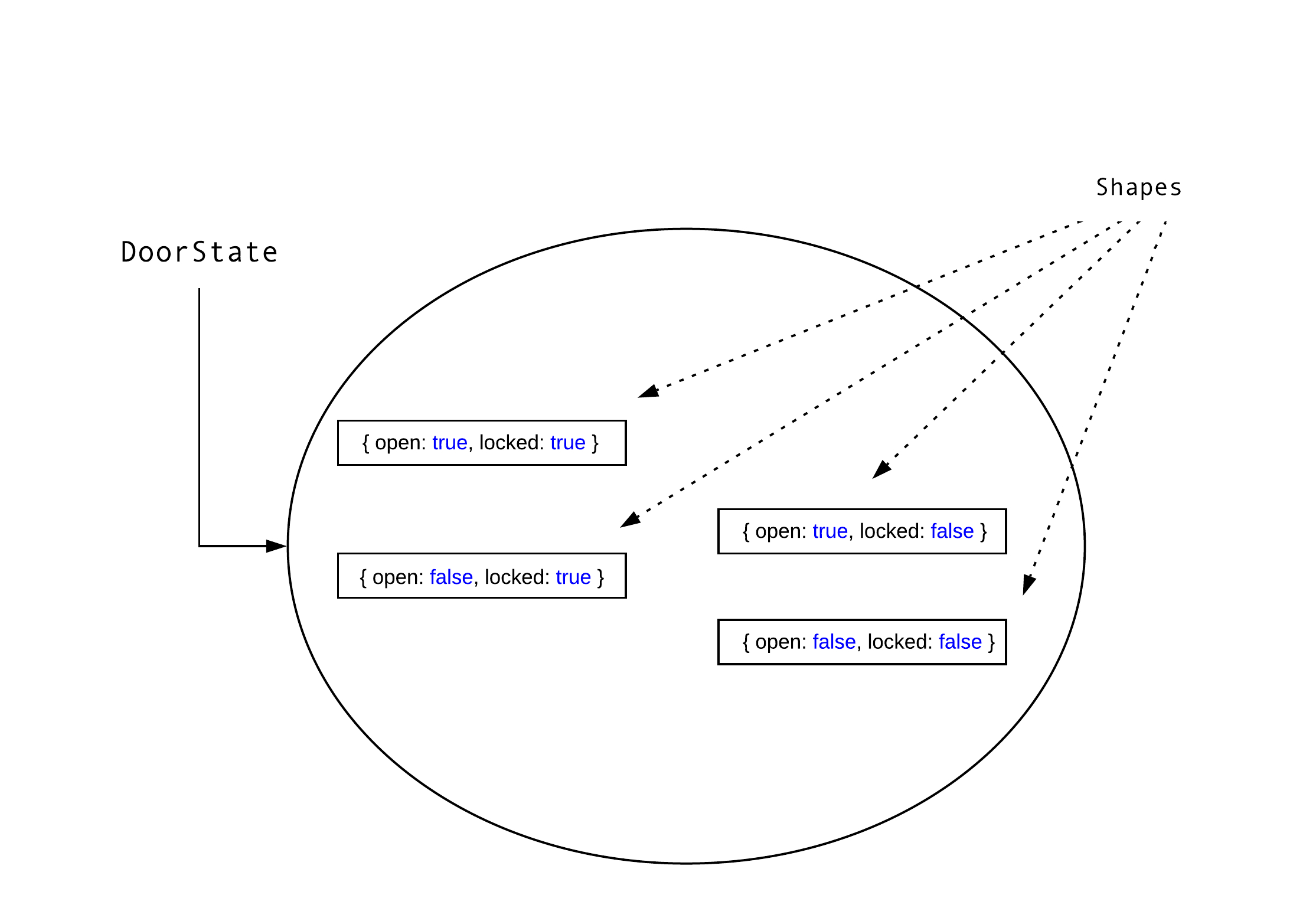 Figure 1: Set of shapes of the type

is a simple basic type in Ballerina without a storage identity so its values become equivalent to its shapes. Therefore the type is defined as having two shapes and .

This can be visualized as seen in Figure 2 below. 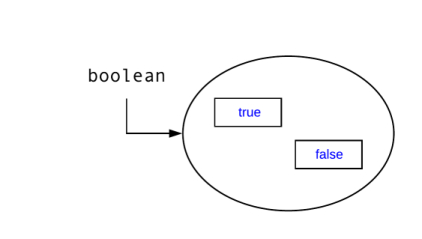 Figure 2: Set of shapes of the type

Now, according to our subtyping rules, we can derive new types based on the

type by creating subsets of its shapes. For example, a new type we can create is where its only supported shape/value would be false. The new type is shown in Figure 3 below. 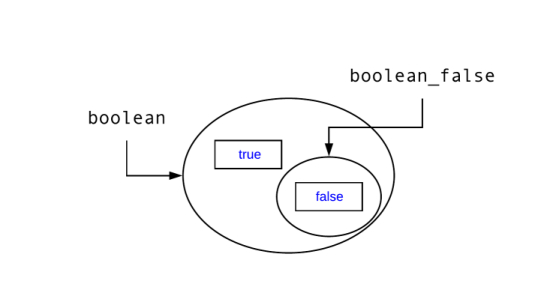 can be defined in Ballerina code in the following manner:

Here, we are using the value

in defining the new type . In a more practical scenario, we can provide multiple values as a union in defining new types. A type created with a single value is called a singleton type. This new type can be used in the code in the following way.

Here, we defined a new variable

The example above is not really useful in a practical scenario, but it demonstrates the basic idea of subtyping. For a more real-life example, let’s create a new type for holding the day of a month.

The Ballerina code above defines the new type

as a union type.

A union type in Ballerina is created by using the syntax

, this basically means, the type represents the union of the value spaces of type and . In the type above, it is defined as a union of 31 singleton types representing each day of the month. The following code snippet shows the usage of the new type.

Here, we see how the

type is used in defining variables that can only store values between 1 to 31. Also, it shows how a value can be assigned to an variable, where is a subtype of since its value space is a subset of ’s value space.

We have now seen how Ballerina’s subtyping works in relation to simple types. Let’s take a look at creating subtypes of records by revisiting our

scenario. Here, we are going to create a new type , where the field has to always have the value . The resultant types and their shapes can be seen below in Figure 4. 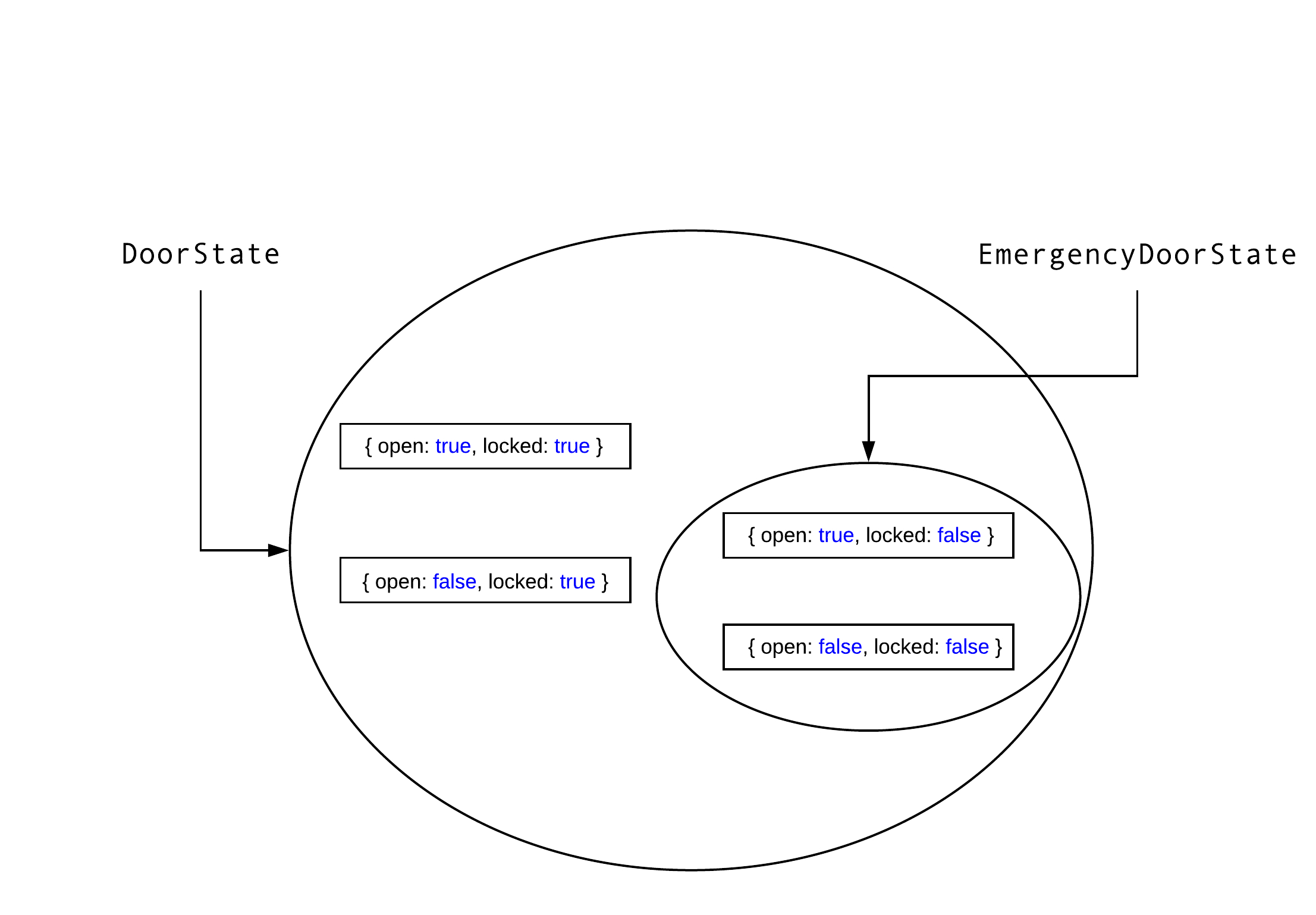 The type definition of

type is shown below:

In the above type, we have modified the field

to be of type , which makes it only have the value . Here, we have also made the usage of default values in records in Ballerina.

So, in this case, the user does not have to always provide the value of a field, but rather in the absence of an explicit value provided by the user, the default value mentioned here will be used.

In this manner, the type

can only have the shapes and . These two elements make it a subset of the shapes set, thus is a subtype of .

The following code snippet shows a sample usage of the

Benefits of a Structural Type System

Having a structural type system is mainly beneficial when you have multiple systems interacting with each other, and data exchange and type compatibility can be resolved easier in this way. Let’s dive into an example that shows this behavior using Ballerina’s integrated query functionality.

In the example above, we filter records from a list of records and create a new value using the

clause, where its structure is defined dynamically at that time and the values are created. These values are assigned to an array of records, which is possible because the generated values are structurally compatible with the record type.

In situations such as above, a separate system from our core application may be generating values to be consumed by us. In these cases, instead of worrying about sharing the code for the data type definitions and so on, you can simply concentrate on the compatibility of the data in order to ensure interoperability.

Ballerina’s open-by-default concept is tied around the Robustness Principle. Here, we should design network-aware programs to accept all of the data that is sent to you and make the best effort to understand it. But when you are sending data, make your best effort to conform to the standard protocols that were agreed upon beforehand. This strategy makes sure we have the best chance of interacting with different systems in a reliable manner.

The main facilitator of this in the type system is the open record concept in Ballerina. So far we have looked at closed records. Let’s take a look at a record type to represent the details of a person.

record type was defined explicitly as a closed record type with an exclusive-record-type-descriptor by using the “” and “” delimiters in the definition. Because it was a closed record, we were able to list out all the possible shapes in the type. If this type was defined as an open record, we would have an infinite number of shapes since values can have any arbitrary field set in the code.

record type above has an optional field ethnicity. In a record type, a field name with the suffix “” makes it an optional field. This means the field value of ethnicity of a record can be skipped without setting a value. Later on, this field can be accessed using the “” operator, which would return a value of type , which is equivalent to the union type . In Ballerina, the nil value and the type is represented by .

, which will be a subtype of the type.

type defined above has an extra field of type string compared to the type. All the possible shapes in the type are included in the set of shapes in as well.

This is possible because the

type is an open type, and its shapes can have the field called as well. By any chance, if we make the type a closed record, will no longer be a subtype of .

Sample usage of the above types is shown below:

In this section, we will take a look at how we will be using type system features for records in implementing network data binding operations with structural validation, data types handling, and payload passthrough operations.

The functionality will be demonstrated using an HTTP service in Ballerina:

A request is sent without setting the

field since the record type defines the field as having a default value. This value is set in the resultant record value. Also, the field is not set since it is marked as optional.

A request is sent with a

value given for the integer field . The service validates the value for the field and the request fails.

A request is sent with the optional

A request is sent with a non-existing value of the

union type. This is validated by the service and the request fails.

type. Since is an open record type, the service accepts these extra fields and these are available to be passed through to other systems, e.g. a forwarding service.

The above executions demonstrate how the Ballerina type system works hand-in-hand with the network data handling functionality in providing an intuitive experience for developers.

In this article, we looked at how the unique features of the Ballerina type system enable us to model network communication patterns in an intuitive way that enables maximum productivity for developers. The seamless integration with the data types and the context awareness allows Ballerina programs to do effective network data operations.

For a more extensive analysis of the type system, refer to the Ballerina language specification.

Various examples on using in-built data types, such as JSON/XML, and other network-based functionality can be found in Ballerina by Example pages. 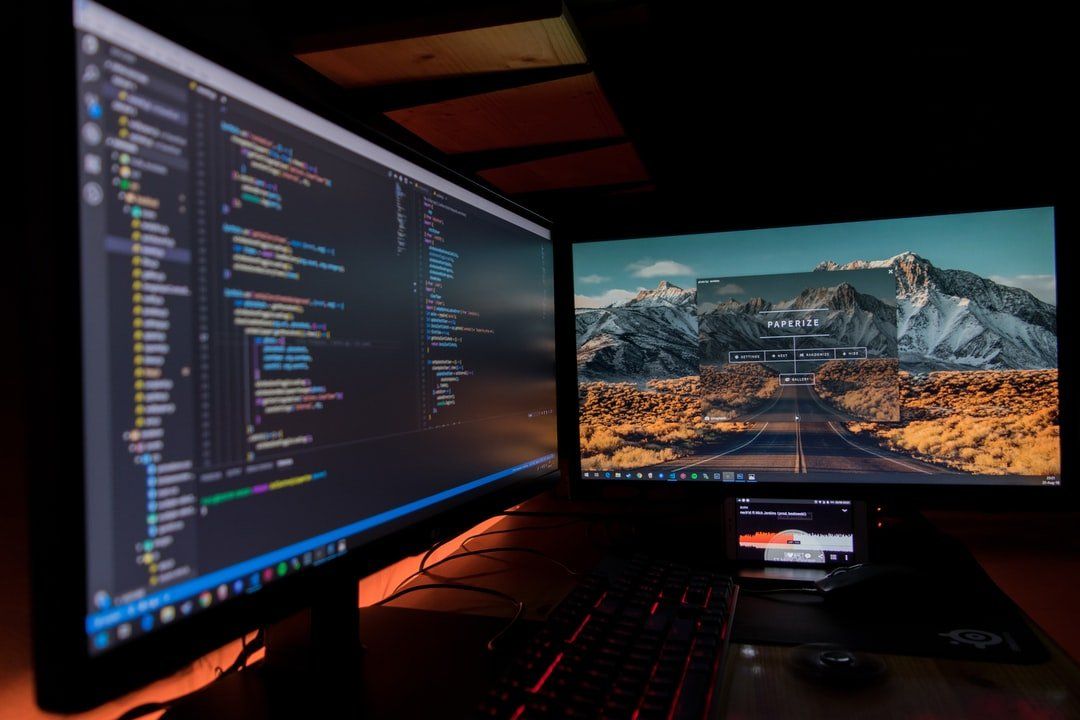