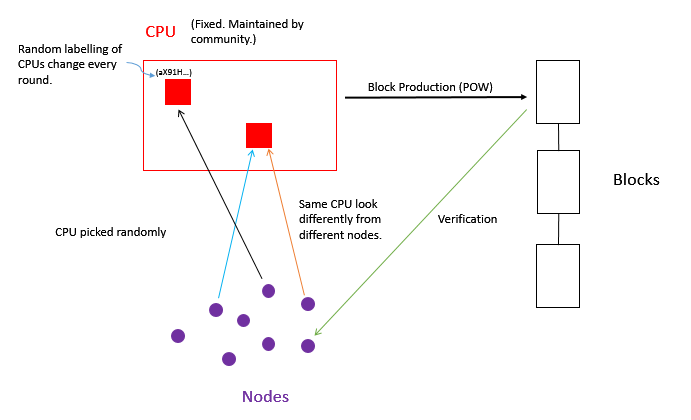 In this article we would like to introduce a new variant of Proof of Work, the Proof of Shared Work (POSW), with the aim of mitigating the mining power centralization problem and the problem of excessive energy consumption in mining.

It is well known that Bitcoin mining has resulted in the centralization of mining power. In fact, recent reports show that the top 5 mining pools possess around 85% of the total hash power (the top 3 already possess >50% total hashrate) [1, 2].

The idea of POSW is to have a community-owned mining resource — the community and all participating nodes maintain a single mining facility in such a way that no one (not even the community itself) could manipulate the mining process. In terms of the benefits of the community, we think this is better than letting hardware manufacturers or others to control and manage the mining pools. Moreover, we can let the community and node owners to vote and decide on issues such as mining pool upgrade and maintenance (the coins therefore also function as governance tokens here).

Since all the nodes will be using the one official mining facility, the difficulty of solving the blocks can be standardized and fixed at an appropriate level. This makes the protocol more sustainable than the current situation, where everyone is racing for higher computing power, causing energy consumption and (potential) environmental issues.

TL;DR: Economic forces will almost inevitably move PoW towards hash-power centralization. ASIC resistance algorithms are quite useless in the face of hardware innovation. This protocol counters this situation by returning the power of hardware management back to the hands of the entire network (instead of it being held under the pool administrator/manufactures). This also solves energy consumption problem and improves scalability.

A. Each computational unit (could be CPU/GPU or ASICs, but will be denoted as CPU in this article for simplicity sake) has a label that is randomly generated for each round of block production.

C. Each node chooses (or vote) one CPU to participate in the block production on its behalf. We say the CPU is owned by this node during this round of block production. This choosing is random as CPU labels are randomly generated.

D. A fixed (and minimal) amount of coin is required from every participating node. This coin can be seen as a rental for computing power.

E. Block production and validation process are similar to that of the standard POW. The difference is that when there are more than one blocks being produced at around the same time, the one produced by the more popular CPU will be accepted.

F. Node owners of CPUs that produced accepted blocks will be rewarded with a certain amount of freshly mined coins, which will be shared if the winning CPU has more than one owners. Nodes will also be rewarded for verifying transactions.

Q: POSW is highly centralized in mining power (even more centralized than what we are having now), and this provides a single point of failure.

A: We prefer to say this proposal provides a standardization of mining resources. Anyone who wants to mine now has a standard source of computational power. The blockchain is still a decentralized ledger without any third party. There is no single point of failure for any content stored on the blockchain.

To alleviate any possible worries, we can have a few backup mining pools at different physical locations/countries.

As mentioned above, we think it is better for the benefit of the entire community to maintain the pools by themselves than giving the control away to manufacturers or people outside the community.

Q: POSW seems effectively similar to POS, in the sense that chances for anyone producing a block is proportional to the coins that she possesses, as she can open as many nodes as she likes and vote on the CPUs with her coins. So this proposal also makes the rich richer.

A: Not really. First of all, it does not suffer from the “Nothing at stake” issue as forking is not a problem from the start (see the 6th point in Discussion).

On the rich gets richer issue, this is only true if there are no costs (whether it is in the form of coin, efforts, time) at all in opening new nodes for voting. We can implement the rule that for any new nodes, it must verify a certain amount of transactions before it is eligible in voting, or that all voting must use coins with a certain minimal amount of coin-age.

Our view is that POS is subjective and has no anchor in real physical world to determine its true history ([3] pg. 11 top, also see discussions of this here and here). Due to this, we think POSW is a more suitable future for Ethereum than a pure POS.

Update: Many people ask us about this. Here we would like to clarify that this is a new blockchain project, not a proposal to fork existing PoW coins such as Bitcoin.

[1] Decentralization in Bitcoin and Ethereum

[2] Are Miners Centralized? A Look into Mining Pools

Are Miners Centralized? A Look into Mining Pools
Read about Alethio’s analysis of the (de)centralization of the Ethereum network. A week’s worth of data from the…media.consensys.net