No-Code is Eating the World 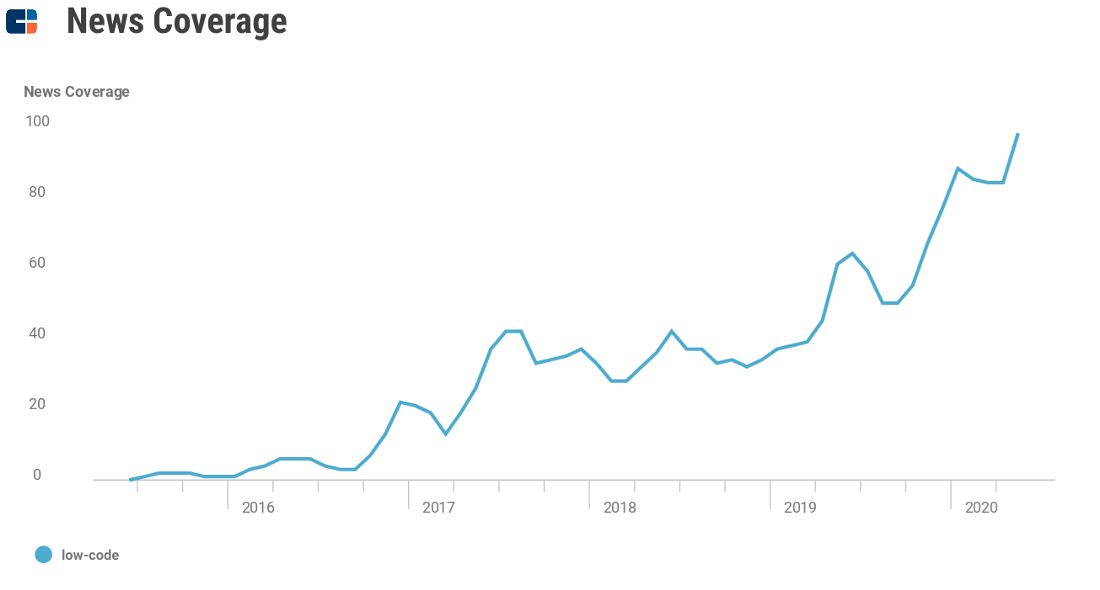 Recently, Amazon released a new tool, called Honeycode, which lets customers quickly build mobile and web applications — with no coding required. This came a few months after Google’s acquisition of the no-code mobile-app-building platform, AppSheet. While these moves surprised many, they’re in line with a larger trend I’ve observed, one that’s growing strong in all sectors, even amidst economic turmoil.

In short, no-code is eating the world. While no-code has recently been climbing the ranks in popularity, it’s a concept almost as old as the Internet.

For instance, though not phrased as “no-code” at the time, a 1981 program called The Last One is a great example:

“It took input from a user and generated an executable program in the BASIC computer language… The software was a program generator, as distinct from an actual programming language.”

However, with extremely limited functionality, it would be a long time before no-code took off.

Building a website in the ‘90s was a minor technical feat, and once enough people struggled with the complexity involved, there was a market opportunity to simplify site-building.

In 2001, b2/cafelog was created as a straightforward blogging tool that increased accessibility to publishing on the Internet.

“You type something and hit ‘blog this’ and in the next second it’s on your page(s).”

b2 was an early player in the low-code space. However, in December 2002, the creator disappeared, and support for the platform ceased. In January 2003, frustrated users forked b2, creating their own no-code web-dev platform: Wordpress.

Wordpress took inspiration from blogger.com as well, which was launched even earlier than b2, in August 1999.

While there were just over 30,000 web pages in 1995, today there are over 5 billion, thanks to the proliferation of low-code and no-code.

While blogs and website builders were some of the first no-code solutions, there are now no-code platforms for everything. Marc Andreessen famously said in 2011 that “software is eating the world.”

Four months after his article, Canva was founded to democratize design. By 2019, over 2 billion designs had been made. Today, Canva boasts a whopping $6 billion valuation with 30 million active users.

No-code is also penetrating the analytics and AI industries.

For instance, no-code analytics tools like Apteo are making it easy for teams around the world to analyze, visualize, and predict data.

Massive corporations like Microsoft, Slack, and Pegasystems are taking no-code seriously, as we can see in their earnings call transcripts.

Here are just a few examples. Note: Transcriptions may not be 100% accurate.

“The crisis is forcing organizations to innovate and collaborate with an intense sense of urgency and there will be much more pressure to get greater returns on IT investments, something model driven, low code technology is suited to provide.”

Microsoft ($MSFT) CEO Satya Nadella notes that no-code is needed now more than ever to speed up processes:

“COVID-19 has accelerated the urgent need for every business to create no-code, low-code apps and workflows in hours or days, not weeks or months.”

“A recent Inc. magazine article called low code, no code software platforms the ‘industry disruptor’ you should pay attention to and cited Gartner and Forrester research that indicates these platforms will top 21 billion in spending by 2022 and account for 65% of all app development by 2024.”

“On the solution side of the business, we recently held a hackathon in Poland, hosting teams from over 25 of our EMEA partners to develop new business applications in our low-code/no-code Enterprise Platform, which is 24-hour development time. We saw some outstanding results with some functionally-rich apps developed in just that short time span.”

Magic Software ($MGIC) CEO Guy Bernstein says that Magic has been in the low-code space for decades:

“When we talk about low-code paradigm, we all know that Magic started 35 years ago with low-code, and all our customers, existing customers are expecting us to provide the concept of low-code.”

When the world’s biggest companies are taking no-code seriously, it’s a clear sign that there’s more to this than hype.

Build on the Shoulders of Giants

Imagine that you needed to make everything from scratch. Forget Canva, Wix, and Shopify, you can’t even use frameworks like Bootstrap or tools like Adobe.

Whether you’re a designer, a developer, an artist, or a content creator, you’d have to build every pixel and every aspect of the experience for your user.

It would take a ridiculous amount of time to even get to the point where you can actually do what you do best.

No-code tools are just the next step after frameworks and programs that simplify our lives.

By using no-code tools to get the back-end work done quickly, you can focus on what actually drives results, whether that’s getting users, building a community, marketing your product, or implementing data-driven strategies.

Related Stories
Subject Matter
Like the Internet, Blockchain Needs Inclusion to Spread by @FrederikBussler
#user-experience
Pitfalls Of Court Hearings On Zoom by @TheMarkup
#zoom
"Connect, Analyze and Learn from Data" - Dr. Yu Xu by @shahmeer
#founder-interview
How to Find The Stinky Parts of Your Code [Part XI] by @mcsee
#refactoring
10 Best NES Game of All Time Ranked by Sales by @joseh
#nintendo
Principles of Effective Goal Setting by @vinitabansal
#goals