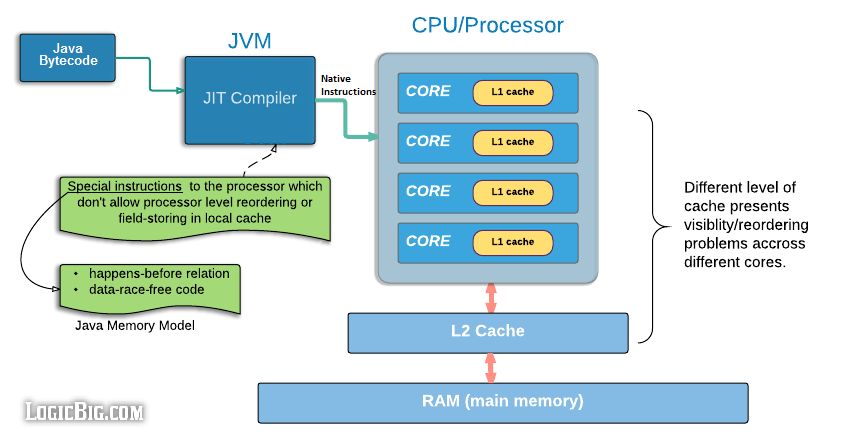 In this article, I would like to share a different approach on this subject that maybe is helpful for you, and also to talk about some particularities and misconceptions about

. There`s very good material on this topic out there (like “Java Concurrency In Practice” [JCIP]).

I encourage you to read it ;)

We will be talking about the semantics of

as defined from Java 5 onwards (on previous Java versions, has no memory-consistency/state-visibility semantic).

Java Concurrency: What is volatile?

is a keyword we can apply to a field to ensure that when one thread writes a value to that field, the value written is "immediately available" to any thread that subsequently reads it (visibility feature).

When multiple threads need to interact with some shared data, there are three aspects to consider:

In the absence of necessary synchronizations, the compiler, Runtime, or processors may apply all sorts of optimizations, like code reordering and caching. Those optimizations can interact with incorrectly synchronized code in ways that are not immediately obvious when the source code is examined. Even if statements execute in the order of their appearance in a thread, caching can prevent the latest values from being reflected in the main memory.

In order to prevent incorrect or unpredictable outcomes, we can use (some form of) synchronization.
It is worth mentioning that synchronization doesn’t imply the use of the

keyword (which is based on implicit/monitor/intrinsic locks internally); for example, lock objects and the keyword are also synchronization mechanisms.

In a multi-threaded context we usually must resort to explicit synchronization. But, in particular scenarios, there are some alternatives we could use that do not rely on synchronization, such as atomic methods and immutable objects.

To illustrate the risks of a not correctly synchronized program, let’s consider the following example. This program could simply print 42, or even print 0, or even hang forever!

Why could this happen? In Java, by default, a piece of code is assumed to be executed by only one thread. As we saw, the compiler, Runtime or processor could optimize things away, as long as we get the same result as with the original code. In a multi-threaded context is a developer's responsibility to use the appropriate mechanisms to correctly synchronize accesses to a shared state.

This relationship is established by either:

To understand the importance of this relationship, let´s review the concept of data race. “A data race occurs when a variable is written to by at least one thread and read by at least another thread, and the reads and writes are not ordered by a happens-before relationship. A correctly synchronized program is one with no data races” (from here).
More specifically: A correctly synchronized program is one whose sequentially consistent executions do not have any data races.

is a lightweight form of synchronization that tackles the visibility and ordering aspects. is used as a field modifier. The purpose of is to ensure that when one thread writes a value to a field, the value written is "immediately available" to any thread that subsequently reads it.

There’s a common misconception about the relationship between

, on the one hand, and references and objects, on the other hand. In Java, there are objects and references to those objects. We can think of references as “pointers” to objects. All variables (expect for primitives like boolean or long) contain references (object references). acts either on a primitive variable or on a reference variable. There’s no relation between and the object referred to by the (reference) variable.

Declaring a shared variable as

ensures visibility.
variables are not cached in registers or in caches where they are hidden from other processors, so a read of a variable always returns the most recent write by any thread. “The visibility effects of variables extend beyond the value of the variable itself. When thread A writes to a variable and subsequently thread B reads that same variable, the values of all variables that were visible to A prior to writing to the variable become visible to B after reading the variable” (from JCIP book).
In order to guarantee that the results of one action are observable to a second action, then the first must happen before the second.also limits reordering of accesses (accesses to the reference) by preventing the compiler and Runtime from reordering of code. The ability to perceive ordering constraints among actions is only guaranteed to actions that share a happens-before relationship with them.
Under the hood, causes reads and writes to be accompanied by a special CPU instruction known as a memory barrier. For more low-level details, you can check here and here.

From a memory visibility perspective, writing a 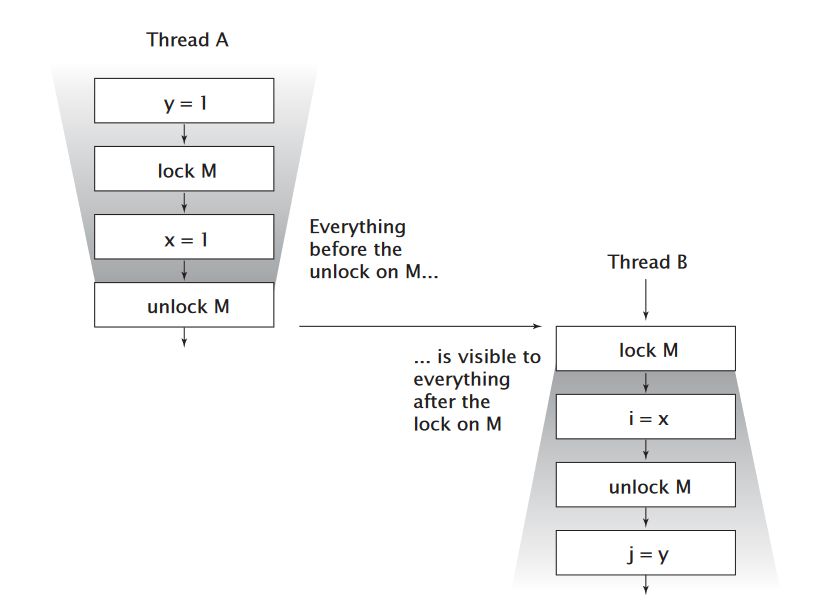 An atomic action in concurrent programming is one that either happens completely, or it doesn't happen at all. No side effects of an atomic action are visible until the action is complete.

There’s a correlation between

and atomic actions: for non-64-bit numeric (long and double) primitive variables, the JVM is free to treat a 64-bit read or write as two separate 32-bit operations. Using on those types ensures the read and write operations are atomic (accessing the rest of the primitive variables and reference variables is atomic by default). accesses do not guarantee the atomicity of composite operations such as incrementing a counter. Compound operations on shared variables must be performed atomically to prevent data races and race conditions.

When to use volatile

variables only when all the following criteria are met (from JCIP book):

Some suitable scenarios are:

Several of the following examples were taken from here. You can find a lot more information about the examples and their internal working there.

Even though it appears as a single operation, the “counter++;” statement is not atomic. It is actually a combination of three different operations: read, update, write. So, even making counter

is not enough to avoid data races in a multi-threaded context: we may end up with lost updates.

In this case, not making INSTANCE

could lead getInstance() to return a non-fully initialised object, breaking the Singleton pattern. Why? The assignment of the reference variable INSTANCE could happen while the object is being initialised, exposing to other threads a (wrong) state that will end up changing, even if the object is immutable! Using , we can ensure a one-time safe publication (see Pattern #2 here) of the object.

In this particular case, making ‘ready’

is enough to make that class thread-safe because after main() updates ‘ready’, ReaderThread will see the new value for both ‘ready’ and ‘number’ (happens-before relationship). But these kinds of constructs are fragile and we should avoid using them: let’s consider for example the case someone flips the two assignment statements.

Even though (mutable) Foo contains fields referring to only immutable objects (Helper), Foo is not thread-safe. Mutable objects may not be fully constructed when their references are made visible. The reason is that, while the shared object (Helper) is immutable, the reference used to access it is itself shared and mutable. In the example, that means a separate thread could observe a stale reference in the helper field of the Foo object. One solution to that issue could be making the helper field of Foo

; guarantees an object is constructed properly before its reference is made visible.

As in the first example we saw, here we have a composite operation.

is not enough in this case.

Here it is the array reference which is

, not the array itself.

variables are a weaker form of synchronization than locking, which in some cases are a good alternative to locking. If we follow the conditions for using we discussed before, maybe we can achieve thread-safety and better performance than with locking. However, code using is often more fragile than code using locking.is not only an alternative to locking (in some cases); it has its own uses, also. can be combined with other synchronization mechanisms, but it is usually better to use only one mechanism on a particular shared state.

doesn’t block (unlike ), there is no possibility for deadlocks to occur. But, just as other synchronization mechanisms, the use of implies some performance penalties.
On highly-contended contexts, using could be detrimental for performance.

only applies to fields. It would not make sense to apply it to method parameters or local variables given all they are local/private to the executing thread.
is related to object references, and not to operations on objects themselves.

code, but requires more care by the programmer to avoid memory consistency errors. Whether the extra effort is worthwhile depends on the size and complexity of the application.

-Can we use volatile without using synchronized?

-Can we use volatile together with synchronized?

-Should we use volatile together with synchronized?

-Does volatile apply to an object?

No, it applies to an object reference or to a primitive type.

-Does volatile tackle the atomicity aspect?

No, but there is a special case for 64-bit primitives where it does.

-Which is the difference between volatile and synchronized?

keyword provides atomicity (through mutual exclusion) over a block of code. But the changes inside that block are visible to other threads only after the exit of that synchronized block.

, , etc. are just synchronization mechanisms. As developers we must use them as  appropriate, and those mechanisms depend on the case at hand.

The opposite. The use of

Related Stories
Subject Matter
Object-Oriented Design: Refactoring a REST Connector by @brunomasci
#java
React Internals: Basic Concepts and Notes by @thecuriouscoder
#javascript
Using Heroku To Leverage CloudAMQP by @johnjvester
#heroku
How to Generate a QR Code Image in Four Lines of Code by @ssukhpinder
#csharp
Best Online Code Editors To Use In 2021🚀 by @saanvi-sen
#ide
How To Create A User Portal On Airtable With Sync Inc And React by @thisisgoldman
#nextjs