Is Freelance Anarchy The Future of Freelancing?

If history has taught us something that has to be this - all great empires have fallen from within.
Is our freelance empire doomed to fail? Wait, how and when our bellowed freelance industry became the great but fragile empire?

The Freelance Triumvirate That First Went Public And Then Rogue

The biggest takeover in freelance history, when Freelancer acquired vWorker, marked the birth of the new freelance world order. However, it was the so-called Great Merge, when oDesk and Elance became Upwork, that finalized this process.
This is how we ended up with the "Freelance Triumvirate." The freelance world has never seen such mega-sized platforms with tens of millions of freelancers working on one place. Really, is there a freelancer in the world who doesn't have an account on Upwork or Fiverr or Freelancer or all of these gigantic platforms?
Then, one by one, these freelance websites went public. First, Freelancer in 2013. Then, Upwork followed. Finally, Fiverr went public.
So, how our freelance musketeers are performing on stock markets? Well, Upwork and Fiverr had the worst quarter in their relatively short, but extremely turbulent history as public companies. 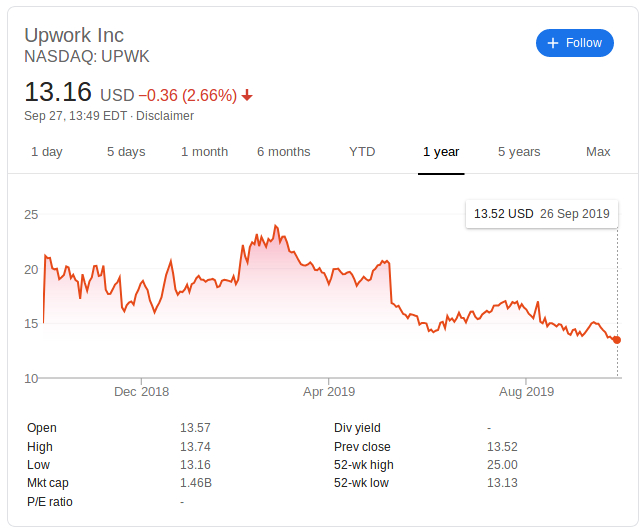 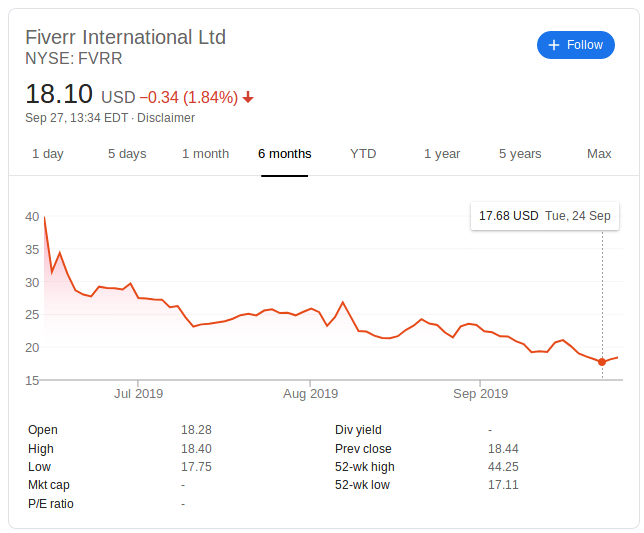 On the other hand, we have Freelancer's stock prices that haven't recovered since 2016. 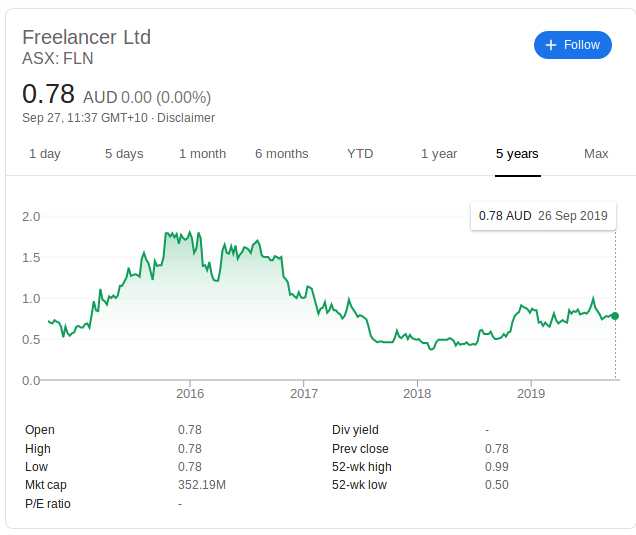 What's going to happen when the stock prices of these platforms hit rock bottom? Well, their financial river will run dry. Nobody will want to buy the worthless penny stocks. These platforms are already charging their users every step of the way: service fees, payment processing fees, membership fees, skill test fees, and bidding fees. There's nothing you can do for free as either a client or freelancer on Upwork, Fiverr or Freelancer.
Imagine the freelance world without Upwork, Fiverr, and Freelancer. Would that be the world of freelance anarchy or new opportunities?

Our Bellowed Freelance Platforms That Are Still Privately-Owned

Who says that every freelance platform has to go public, sooner or later? There's an exception to this rule. Actually, there are three of them.
Why do companies go public, in the first place? Well, you don't have to be a Wall Street guru to know the answer to this question. Because they need the money, as simple as that.
It seems that not all freelance platforms need money the same. For example, Toptal "is said not to have raised additional funds since its seed round because it has been profitable." When you're doing just fine, there's no need to sacrifice your business freedom by going public. Right?
Here's another example. Guru has been around since 1999. This fact makes Guru be one of the oldest freelance platforms that's still alive and kicking. Truth to be told, Guru has had quite a turbulent history when it comes to the ownership over this online marketplace. However, the fact remains that Guru isn't a public company.
And, what about goLance? This platform defies all logic and any known business rule in the freelance industry. How? They are decreasing rather than increasing their freelance service fees, which is the "default mode" for online marketplaces. What's even more interesting goLance has a strict no-cost-to-clients business policy. Not only that goLance doesn't take money through payment processing fees, but they actually give back money to their clients through CashBack option. This youngest platform to join the freelance industry race gives an impression that's one of the richest. They just couldn't care less about the profit, could they?
Is The Great Freelance Depression Inevitable?
If Upwork, Fiverr, and Freelancer collapse at the stock market, then the chaos will prevail. It will take some time before the freelance industry adapts, reorganizes, and eventually recovers from this blow. Make no mistake about it; freelancers will suffer the most.
How far away are we from the point of no return? Perhaps, I'm just exaggerating. Let's take Upwork as an example. The numbers never lie. So, what the official financial reports for the first two quarters in 2019 have to say about Upwork's stock market future?

If you compare Upwork’s revenues for the first three months in 2018 and 2019, then you can cheer up. There are positive changes of 16.4% for the total revenue and 20.7% for the gross profit.
However, when you take into consideration the Operating Expenses for the same period, you get a completely different picture.

The total operating expenses have increased by 13.3%. If you leave out the provision for transactions losses, you get the increase of almost 15%. The most troubling part is that the general and administrative costs have jumped to 28.7%.
I became even more pessimistic when I analyzed the financial reports and activities in the second quarter.
Almost right after Upwork's report for the first quarter was announced, their stock prices plunged dramatically. In May, Upwork's stocks dropped for more than 25%.
I did my very best to pinpoint the exact moment Stephane Kasriel sold the jaw-dropping number of 280,000 shares on the attached illustration. Someone may say, the timing was perfect. This transaction took place "in the middle of fall" of Upwork's stocks before they hit the record low on June 5th.

Then, two weeks later, as soon as Upwork's stocks slightly recovered, Stephane Kasriel sold another quantity of shares (120,000). This time the timing wasn't perfect, but from a broker's point of view, it was still good enough to get the most out of your stocks.
To make things even worse for Upwork, the situation with the operating expenses didn't improve.

When you have a "tiny gap" between your Gross Profit and Total Operating Expenses, the following question is inevitable. Who's going to pay, so Upwork's show can go on?
The first Upwork's financial report in 2019 killed the free bids/connects for freelancers.
The second-quarter report hit the clients. Here's the official announcement, you can find in Upwork Stockholder Letter Q2 2019 (Page 8):

We are also migrating all Upwork Standard clients from a 2.75% to a 3% payment processing and administrative fee when they transition to an Upwork Basic or an Upwork Plus account. We are ahead of our internal target in transitioning existing clients to Upwork Basic and Plus, which started in June 2019, and all new clients are defaulted to the new rate upon signing up.

Now, when Upwork stock prices hit the record low, I can't see where and how could Upwork ensure the much-needed cash flow.

From Business Romance To Spending Decadence

At the height of its power, the Roman Empire became unbearably decadent. We all know what the result of such decadent behavior was.
And, then I stumbled at this piece of news that makes you wonder, how did we come to this?
The new co-CEOs have also put up for sale a Gulfstream G650 jet which WeWork bought new for more than $60m last year.
In the middle of their worst stock market crisis, Upwork was preoccupied with the sweet pain of decorating their new extravagant office in Chicago. 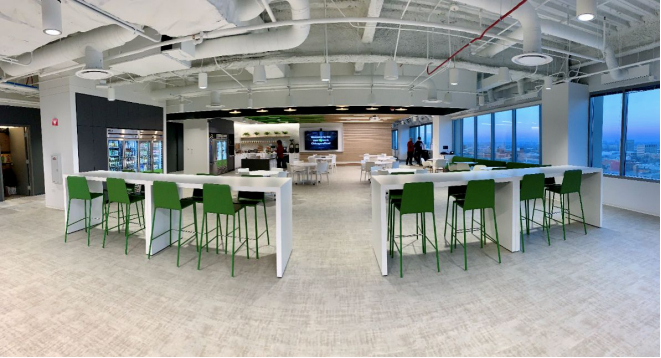 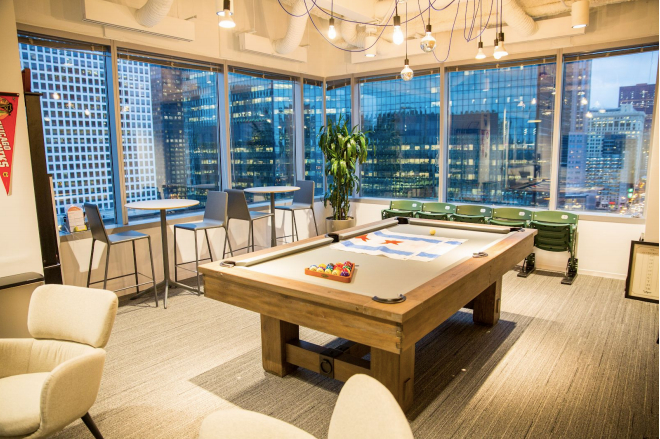 When you see the pictures, you wish to live not only to work there. The funniest thing, though, is that a symbol of remote work and virtual offices became so occupied with the shiny new expensive physical office. It just doesn't add up or does it?

If there's one thing, every freelancer knows best, that is how to survive. The new and better freelance world won't have to rise from the ashes. The trio of privately-owned platforms: Toptal, Guru, and goLance are stock market bulletproof. The new freelance world will be decentralized and hopefully, less greedy.