Is China Opening Up to Blockchain?

China is planning to unroll a series of blockchain-friendly laws in early 2020 to open themselves up to blockchain use cases. In a recent statement by President Xi Jinping, the country will aim to unroll its own digital coin. China has shown support in the past for projects like NEO, and more recently, TRON. At the same time, the country is very wary about token sales and any project that may cause losses on the personal finance level. China has taken a stance of “blockchain” versus speculative digital coins, and they aim to harness the power of distributed networks to distribute and secure data for various use cases.

China is on the lookout for opportunities in the crypto space with startups as well as existing public blockchains. For about 14 months now, the Center for Information and Industry Development in China has tracked a chart of the top digital coins and tokens, based on their technological merits and potential for innovation. The CCID index by the Chinese Ministry of Industry and Information Technology offers a glimpse into what researchers see as the most important feature of public blockchains.

The Chinese agency ranks a total of 37 projects, including various types of networks. Curiously, it is not Bitcoin (BTC) that has the highest grades for innovation. BTC is currently ranked 11th. EOS has topped the charts in a series of past reports, and they are back again as the leader in the 14th edition of the ranking released in October. The only project that is getting close is TRON, a close competitor when it comes to attracting startups and developers.

To get to the top of the chart, EOS had to match the criteria for the CCID rating. The rating collects an assessment of three major categories - basic technology, accessibility, and creativity. Of those categories, EOS has gathered more than 151 points, far ahead of Bitcoin’s 103 points. Bitcoin’s network is very basic when compared to EOS, with a simple mechanism of onboarding miners. EOS, on the other hand, includes governance as well as a marketplace to determine the price of RAM, a relatively scarce resource that establishes the capabilities of the EOSIO distributed operating system.

EOS, with its distributed operating system EOSIO, deserved those points in several ways.

First of all, EOSIO is a scalable ecosystem allowing for app creation, with significant scalability potential. Its ecosystem offers the creation of accounts, authentication, databases, asynchronous communication, and the distribution of applications across multiple CPU computational resources. Simple transactions between nodes are carried and distributed faster in comparison to a system of miners and thousands of nodes. The system was developed to harness distributed computational resources and offer developers a complete platform in well-known programming languages to support their games, smart contracts, exchanges or other decentralized solutions.

Currently, EOS is the fastest, busiest network that utilizes delegated proof-of-stake. This means that blocks are not made by anonymous miners, but the task is delegated to 21 elected block producers. This structure allows the EOSIO to run as a distributed operating system while handling over 87 million transactions in a day, and all of them with no fees.

This innovative approach was built on top of other similar blockchains, some of which are featured prominently in the CCID report. These networks, also the brainchildren of Dan Larimer, the creator of EOS, share similar features of block production, but EOS is the most advanced so far, as it allows for an ecosystem of distributed apps.

Because of the speed and relative ease of use, plus the free transactions, the EOSIO ecosystem has attracted multiple developer teams to build their games or platforms. EOSIO will also host Voice, the flagship app of Block.One, which will offer voice services with a blockchain record. Other prominent projects include EOSKnights, EOSBet, the Dice distributed app, as well as many decentralized exchanges.

The Ultra Project Aims for the EOS Advantage

These features have attracted the Ultra project as one of the promising platforms being developed within the EOS ecosystem. Ultra is a game distribution platform that aims to become an industry standard for developers, publishers, and gamers. Ultra harnesses the power of EOSIO to bring a blockchain record and fast performance to indie and big video game developers.

Ultra is taking advantage of the new legislation in China with a clever system of “operators”. They basically offer their tech to local corporations that are in return responsible for running their own platform based on Ultra’s technology. Operators also take care of legislation, marketing, content and all the things that could be complicated to manage as an outsider. This way, it becomes much easier for the games distribution platform to successfully implement their solutions on difficult markets such as China, Japan, Korea or SEA, as stated by the company: 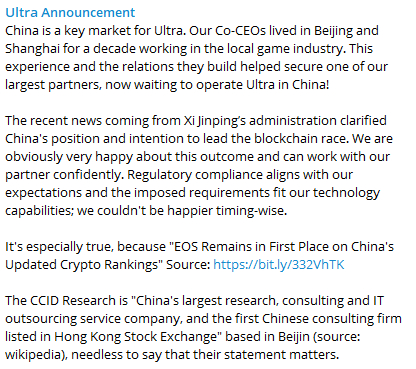 The fame and prominence of EOS can only help new arrivals like Ultra and other projects from the booming gaming industry. China is becoming one of the hubs for game creation, and these teams aim to harness that trend.

EOS is leading in China, with the influence of Chinese block producers who have a significant presence among the 21 elected nodes. The appeal of EOS is not only in the eyes of regulators - local startups in China have also pledged their readiness to support the EOS network.

The EOS market price is another advantage. EOS trades at $3.35, boosted by the recent spike in coins that are favored by Chinese traders. EOS has remained relatively stable even during significant price drops across the broader market. EOS is present and highly active on multiple exchanges, giving access to buyers through markets like OKEx, Binance, HitBTC, BKEx, Bibox, and other active trading hubs.

The advantage of EOS is in its positioning as an innovative network that avoids the pitfalls of the first distributed app network, Ethereum. EOS avoids the need to rely on anonymous miners and network congestion, by instead providing, in the case of Ultra, a freeway to use as many transactions as needed in its games and reward distribution.

Disclaimer: The author is not associated with any of the projects mentioned.