With John McAfee, it’s hard to tell where the myth ends and reality begins. Nearly everyone recognizes the antivirus McAfee program rooted on many PCs that brought him his first fortune in the 90s; the subsequent details of McAfee’s life grow hazy, frenzied, unhinged.

After selling his stake in the antivirus company, he became an accomplished yogi, an ultralight aircraft pilot (also known as a ‘sky gypsy’), a ‘person of interest’ in a well-documented Belizean murder investigation, and consequently an international fugitive — they are now making a movie about the incident starring Zac Efron — a runner-up for the 2016 Libertarian Party presidential nomination, and a cryptocurrency pioneer.

I’ve spent a weekend with McAfee once before, raiding Fox News headquarters as he appeared in the first nationally televised Libertarian Party debate in 2016, ending the night in the backroom of a Chinatown speakeasy alongside a blubbering John Stossel.

I recently caught up with him over Zoom; the following interview is edited for conciseness and clarity. We spoke about coronavirus, if Pizzagate is real, the one author McAfee believes will change your life, and how to properly drop acid.

John, thanks so much for speaking to me.

Can you hear me?

Hang on, I’m just fucking with you. Let’s continue.

So you’re in Spain right now?

I can’t tell you where I am. We’ve left Spain. We don’t discuss where we were, except in situations where no one can catch us anyways. [laughs maniacally]

You recently said that coronavirus allowed governments to ‘hack our democracy,’ and Elon Musk tweeted in agreement. Can you explain more about what you meant?

Well, let’s take some obvious facts. [Congress] passed a 2 trillion dollar bailout. It came with a lot of different rules and regulations, among them — and please check this out, people — is that the FBI may now, without cause, without a court order, with no grounds whatsoever — as long as there is a ‘national emergency’ — hold you indefinitely.

Do you understand that means the FBI can give you life in prison? No trial, no judge, no charges. Now if that is not a ‘hack of democracy, my friends,’ then fuck me.

Here’s the issue — who gets to declare a state of emergency? That person or authority is now the dictator of this country. Your constitution has been suspended for as long as those people choose for it to be a national emergency — which, in the case of a pandemic, might be forever.

…Until a vaccine is developed.

A vaccine?! We’ve got a vaccine for the flu. It doesn’t make you immune, does it? You got to take it every goddamn year. No, that’s not going to help anything, people.

How do you think coronavirus will affect the geopolitical balance-of-power in the world?

Well, I don’t give a shit if America is 12 points ahead or China is behind or France has won or lost. Who gives a flying fuck! I care about what’s happened to us, not the balance-of-power between those who are now our masters.

There is no greater problem than that. We have created a world in which our masters are brutal, corrupt, greedy. The bailout in America is 2 trillion dollars in America. You realize that for a family of four, that’s $24,400 per year. Now, if that doesn’t show up in your bank balance, then whose pockets did that 2 trillion dollars end up in?

If you ask that fucking question and answer it, you will vote these pricks out of office. Every last one. 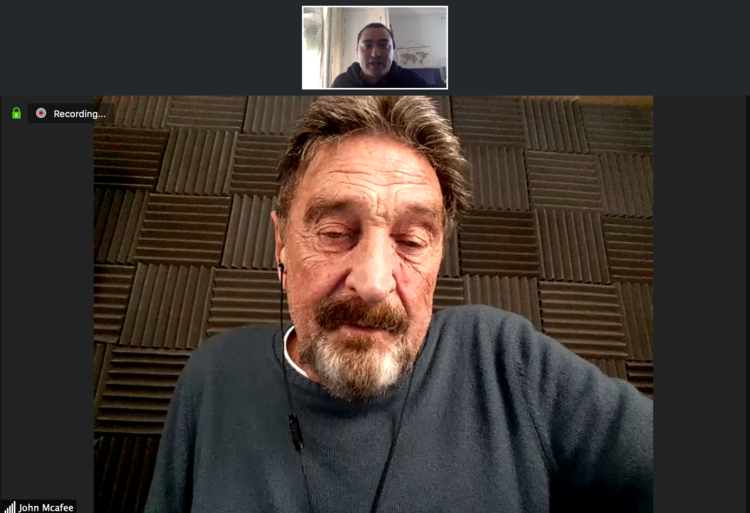 I recently published a piece on that — on the Federal Reserve not being audited, and the bailout not going to the American people — so that definitely resonates.

Can you talk about what you’re doing in cryptocurrency right now?

If we’re truly going to be free people, then our tools need to be free tools. They can’t be centralized exchanges, can they? Because two-and-a-half years ago, China said those are illegal and shut them all down overnight.

Now, decentralized exchanges can’t be shut down. They have no owners, no managers, no decision makers. The McAfee DEX is a decentralized exchange that was built for you, at great risk by me. It doesn’t ask your name, your address, your e-mail, your Social Security. You are totally anonymous.

Now, if the FCC, which is after me now — along with the IRS — ever catches and tortures me, I can’t help them shut it down. It’s not possible!

Now, am I a criminal mastermind for building this? Or am I giving the people something of power — a lasting fucking legacy?

Our job is not to police the world. Our job is to build things and let the policing come when it needs. And to make the world somewhat better for our children and grandchildren.

You’ve tweeted a lot about Jeffrey Epstein — even naming his alleged killer. The promotional logo for WHACKD, your token, was Hillary clutching a pizza — a reference to Pizzagate — and staring at a pair of dangling feet. As someone who’s had a wide breadth of experience and a personal fortune, how much credence is there to the idea of a worldwide pedophile ring run by elites?

Can you read this? What does it say?

I believe it so strong that I fucking tattooed it on my body.

Ask me again how I feel. 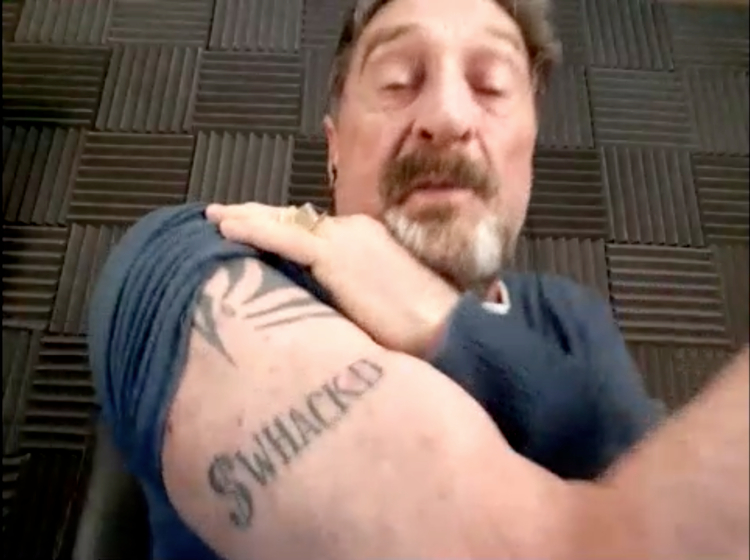 For people to wake up and open their consciousness, sometimes they need a nudge. You’ve done a ton of psychedelics. Is there one in particular you would recommend?

You’re assuming that I would recommend chemistry as the key to open the lock on the door to yourself. I just don’t know if that’s true for everybody.

But for me, I wouldn’t grab one psychedelic over another. Between a 12-hour LSD trip and a 45-minute DMT trip…both will be equally potentially hellish.

But I think the biggest thing isn’t drugs or yoga or jumping off a cliff with a bungee cord around your ankle. It’s if you’re willing to ask the question: Who am I? And asking that question is the beginning of the beginning.

Who am I? Not who are you in name or job. You’re not an engineer or doctor or lawyer, no matter what people call you. You’re not a car owner or a homeowner. You’re not married, single. You’re none of those petty fucking labels. You’re something far more wondrous. Something so magnificent that there are no labels big enough to fit around it. Something complete, perfect, powerful.

Don’t just drop 100 micrograms. I would do 500. Why? You can’t really overdose on LSD easily. And then sit quietly in the morning sun on a grassy knoll somewhere, hopefully under a tree that’s been sitting there for hundreds of years and knows every living creature within a thousand miles. Sit under that tree, on the grass, in the sun, shade your eyes if possible, and drop that acid. And wait for life to grab you by the legs, the wrists, the arms, and lift you.

But if you take anything comes out of my mouth as advice or a suggestion, please, God, think again. [laughs maniacally]

In searching for ‘the answers,’ do you recommend any specific books?

Anybody who has never heard of Jiddu Krishnamurti, get off your sofa right now, go on Amazon and order any of his fucking books. I don’t care which one. Make sure it’s Jiddu — there’s another Krishnamurti out there, can’t remember his name. If your life has not, at the end of reading Jiddu, taken a tangent of extraordinary proportions — I mean shit you would never have dreamed of — then I’ll eat my shoe.

Because it will change you. And after that, the world opens up. I don’t need to advise you anymore on what books to read.

For me, as a scientist and mathematician, the greatest of all books in terms of altering my life was On The Origin Of Species By Means of Natural Selection by Charles Darwin. Nothing has moved me more. And it saddens me when people go, “Yeah I know evolution. I read a condensed book on it.” No, [Darwin’s book] is 2 thousand fucking pages and it’s going to take you weeks. You read that and there isn’t any more questions about evolution. None.

The evolution of the eye, something so complex — Darwin explains it in one goddamn chapter. How did he fucking find that truth? To me, that book is the only concrete proof that God exists! Because of the mind of man.

But no one’s going to read that fucking book. So I’m not recommending it. If you read just one book of Jiddu Krishnamurti, you will be a different human being.

Is there anything you have yet to do in your life?

Well, I’m 74. What would I want to experience? I’ve slept with thousands of women. I’ve been married too many times. I’ve made fortunes and lost fortunes. I’ve been in jail, on the run, lied on beaches in the South Pacific. I’ve had a very entertaining life.

What the fuck else do I want to do? I want to wake up you kids out there. You went to sleep on us. You let other people start thinking for you. Who are those others? The mainstream fucking media. Your government propaganda. If I could reach through this screen and grab you all by the throat, I would say, wake up my children, my grandchildren. I fucking fear for you. 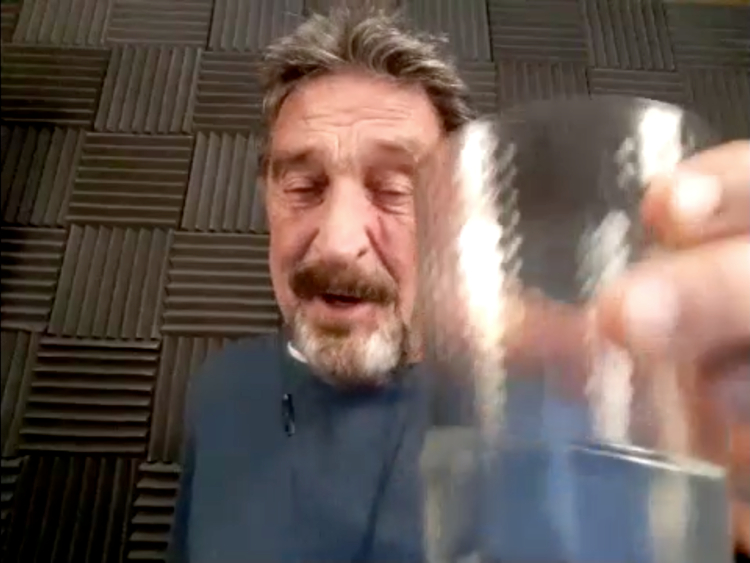 Right now there are a lot of laws being enforced telling people not to go outside, not to do certain things. What can young people really do right now?

I think I made that recommendation earlier, but the first thing you’ve got to do is ask who the fuck you are. Because if you don’t know who you are, then how in the hell are you going to decide what you’re going to do?

And that you must find. Or else we are fucking lost as a species. We will become two fucking species: the prey — that’s us — and the predator — the thing which works so hard to take control away from us, our governments.

You must, children, wake the fuck up and find out who the fuck you are. And then come and see me.

Related Stories
Subject Matter
Book a Demo. Ship Fast. Rest Easy. LaunchDarkly. by @LaunchDarkly
#promoted
The Role of Blockchain and Decentralization in the Digital Economy by @maddykutechno
#decentralized-internet
$Fil Mooned Right After I Sold It. Am I Weak Hands? by @digifinex
#filecoin
My First Impressions on BitClout by @TheLoneroFoundation
#bitclout
Zero-Fee Trading, Global Liquidity, and The Many Woos of WooTrade by @sonhng
#cryptocurrency
Interchain Transaction Bridge - The Missing Key to Creating Seamless UX in a Multi-chain Universe by @weitingchentw
#bitcoin