Influencer Marketing can Generate up to 700% RoI But Comes with Risks!

A well-planned influencer campaign can yield much better returns than traditional banner ads. For a fintech project, collaborating with influencers can be a key to success – but only if you manage to negotiate all the stumbling blocks.

According to a Mediakix study, 89% of marketers believe that investment in influence marketing generates a higher ROI than other channels. 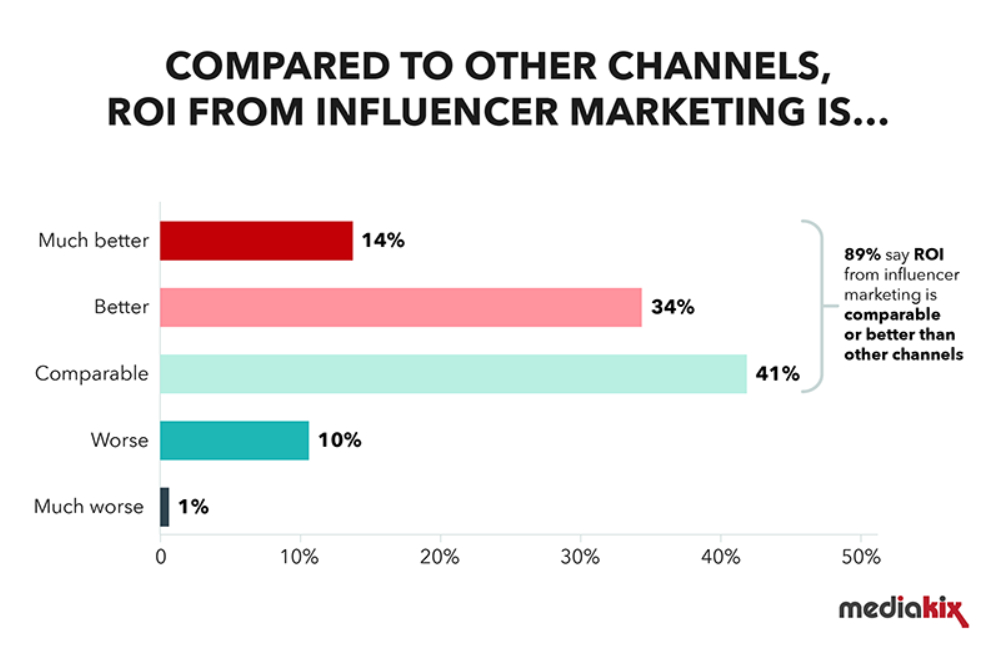 In some cases, every dollar spent on influencers yields up to $8. Therefore, it’s not surprising that this market is growing so rapidly. Experts predict that it will reach $10 billion in 2020.

The potential of Influencer Marketing is particularly high in the blockchain industry. With dozens of projects launched every month, investors physically can't research all of them.

Moreover, most token buyers aren't blockchain experts, so it's hard for them to evaluate the potential of each platform. When choosing where to invest, they rely on the opinion of the influencers they trust most.

This makes influencer marketing a great way to win over your target audience and create a buzz around your project. But what's the most efficient way to use this marketing channel?

Among the most popular services offered by influencers are YouTube reviews, tweets, and Telegram posts. By the way, YouTube accounts for almost 40% of all the traffic generated by blockchain-centered social media channels (see the diagram). Twitter comes second, followed by Facebook – in spite of the fact that advertising crypto projects is banned on the latter platform. 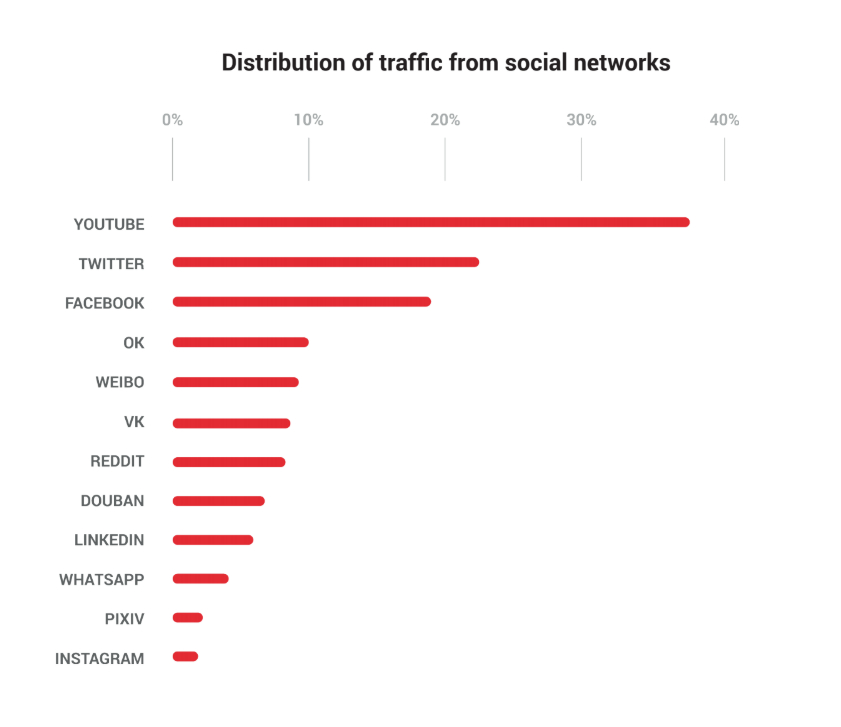 Those startups that can afford working with famous influencers like CryptoLark or Ivan on Tech often get great results – as it happened with the videos in the screenshot below, which scored thousands of views:

Tweets also allow projects to reach out to dozens of thousands of potential investors. The most notorious example is John McAfee, who has over a million followers on Twitter. In 2018, the creator of the famous antivirus software said that he charges over $100 000 for one promotional tweet. However, McAfee only accepts those proposals that he finds interesting. Some of them are rather unexpected – like this project of a zombie farm in China: 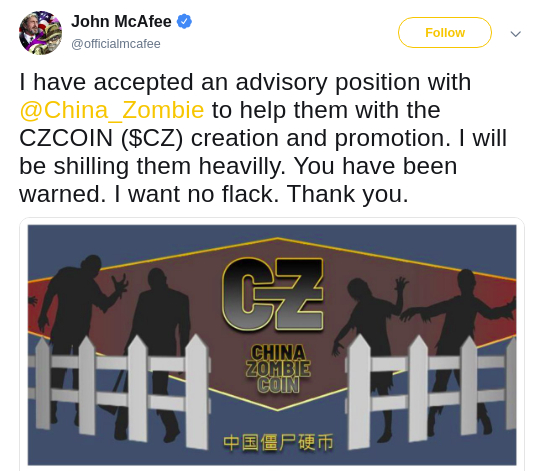 Startups with smaller budgets can choose among dozens of influencers who charge between $200 and $400 per tweet. They usually have from 20 thousand to 50 thousand followers. By the way, you don't contract an influencer with a huge audience to get good results. So-called micro influencers often have more loyal and engaged followers and thus generate more conversions.

Blockchain influencer marketing only works if you pick the right person to promote your project. You need to find out the answers to the following questions:

Dubious practices and scams are common in influence marketing. For example, hundreds of shady characters pretend to be famous figures like Louis Thomas or Crypto Bobby.

A tweet by Crypto Bobby, warning of scammers impersonating him

A marketing offer from a fake Crypto Bobby on Telegram

Of course, such an «influencer» will immediately disappear without a trace after receiving your money.

One more issue plaguing startup chats in Telegram is the never-ending stream of marketing offers. They mostly come from people who claim to be influencers – though they are nothing of the sort.

Such characters tend to own minor channels on Telegram and YouTube. Most of them aren't experts at all, and their audiences are small. Their prices can seem attractive, but don't count on a lot of conversions.

Study the market before making a decision

Even though the risks of working with influencers are quite high, you shouldn't neglect this marketing channel. There have been cases when influencers generated over half of the ICO revenue. But in order to get such a dramatic effect, you need to invest not only money, but your time – lots of time.

The best strategy here is #DYOR, or Do Your Own Research. You can also delegate the task to professionals you trust. One thing you should never do is agree to an incoming offer without thinking it through. You shouldn't pick the first influencer you see on a marketplace like Coinbound, either.

Spend as much time as it takes to do a due diligence of a large number of influencers. It's better to delay your campaign launch and carry out a comprehensive evaluation than waste thousands of dollars on influencers who can't convert.

As long as you stick to a systematic approach, you'll be able to find an influencer who will check all your boxes in terms of fees, audience size, and expertise. However, your role doesn't end here. You can face quite a few challenges when working with influencers. In one of our next posts, we'll explain further.

About That Blockchain Cruise and McAfee's Weight 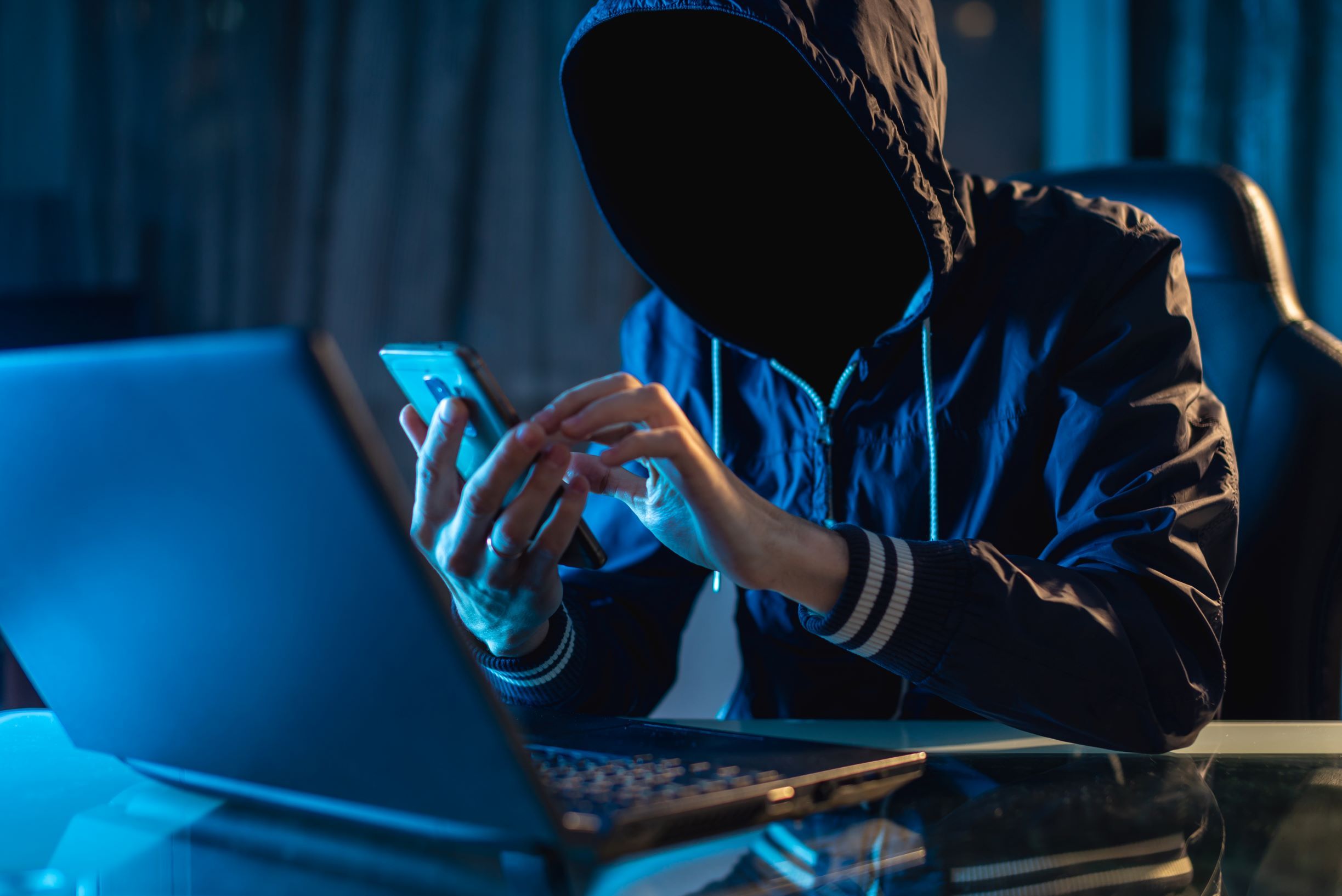