In France, cyber criticism turns violent as “activists” burn a fablab to protest the diffusion of… 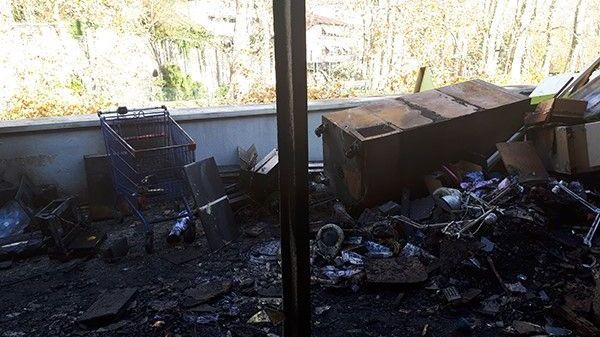 What will be the consequences of big tech growing moral failures?

People don’t throw rocks on the Google buses anymore. Those were the good old times.

On Tuesday, La Casemate, a fablab based in Grenoble was vandalized and burned because it was described as “a notoriously harmful institution by its diffusion of digital culture”.

The public policy of supporting the digital transition was also criticized as “City Managers satisfy money-hungry start-ups and geeky geeks by opening Fablabs in trendy neighborhoods These seemingly extremely heterogeneous devices all aim to accelerate the acceptance and social use of the technologies of our disastrous time”.

It’s not the first time people turn to violent protests against automation and computers.

From 1979 to 1983, in France, the Committee for Liquidation or Subversion of Computers (CLODO) was active in the region of Toulouse, where they posed bombs and burned buildings (CII-Honeybull in 1980, International Computers Limited in 1980, Sperry-Univac in 1983, etc.) At the time, they explained to the French Media that they were “workers in the field of data processing and consequently well placed to know the current and future dangers of data processing and telecommunications.” And that in their view, “ The computer is the favorite tool of the dominant. It is used to exploit, to put on file, to control, and to repress.”

And there were others. In 1983, in West Germany, a computer center designing software used in Pershing missiles was destroyed by a group called Rotte Zellen. In 1984, a Belgium group called the Communist Combattant Cells (CCC) bombed and destroyed the headquarters of several companies in Belgium and Germany. In London, a group called the Angry Brigade tried to do the same. And there were similar actions in Asia, in South America and of course in the US.

It’s easy to dismiss the actions of these digital “protesters” as mere luddites fantasies. But their point was not that the computing industry would take jobs from people.

In August 1983, the CLODO gave a rare interview in English to Processed World, where they explain : “It’s neither retrograde nor novel. Looking at the past, we see only slavery and dehumanization, unless we go back to certain so-called primitive societies. And though we may not all share the same “social project,’’ we know that it’s stupid to try and turn back the clock.” It’s rather that these tools are “perverted at their very origin”, pointing for example “that the most computerized sector is the army, and that 94% of civilian computer-time is used for management and accounting”. To be clear, in their 1983 view, “if microprocessors create unemployment, instead of reducing everyone’s working-time, it’s because we live in a brutal society, and this is by no means a reason to destroy microprocessors.”

Since the 1983 movie “Wargames”, people have dissociated computer-related terrorism and violence. By insisting on hacking and hackers, it looks like digital politics, protests and violence only take place in some sort of virtual world, and that they belong to a grey zone where moral values are distant and fuzzy. Indeed, their vocabulary of “White Hat”- a good hacker, and “Black Hat”- a bad hacker, seems more related to the Lords of the Ring than to the Communist Manifesto. And since the seminal 1984 book of Steven Levy, “Hackers: Heroes of the Computer Revolution”,the digital world has been fascinated by this new storytelling, the claim to be able to break the rules of society. Its leaders always want to present themselves as revolutionaries. They always begun in a garage. They were always former hackers. They all wanted to change the world.

But it seems that this storytelling has come to an end.

In their text posted on Friday, the group of Grenoble share the same disappointment as the CLODO. They call the digital promises “a blatant lie”.

Echoing recent digital critics such as Douglas Rushkoff or even myself, they ask themselves what’s revolutionary or prophetic in an industry that relies on old-school capitalism, monopolies, micro-work, state regulations and money as a cardinal value. And as they reject the hacker myth, they end up calling a revered place such as the MIT… a “temple of technocracy”. But people surprised, offended or shocked by this qualification should remember the way Aaron Swartz has been driven to suicide after being mistreated by this institution.

Violence is to be condemned. I feel sad for the people of La Casemate. They are the victims of a discharge of hate and distress. But they are also the victims of the religion of progress and technology that is being sold as an inescapable future for everyone.

It’s not the truth, but there is indeed a need for disenchantment in the digital world.

In the end, the members of the CLODO were never caught. They were cast aside by the emergence of a new storytelling presenting the digital transition as a revolution in its own right. But there is no new story to tell. And as the promises of this so-called revolution now fail to realize, it was only predictable that people would go back to real protesting and real violence as a result. It’s no surprise that after 20 years of obscurity, people are beginning to remember about them. As the negative impact of the digital industry is being felt harder and harder by citizens, actions will not be limited to nice ex-big tech employees speaking in elite conferences, or to smart social science researchers writing outraged papers as they are being financed by technology companies.

Technology is not neutral, and there is no virtual world.

Update : I should have mentioned “Industrial Society and its Future”, aka the Unabomber Manifesto, but that would need another post, or even probably a series of post… just go read it for yourself, if you’ve never done it before… the Wikipedia article on Ted Kaczynski can be a good entry to grasp what it’s about.

Update 2 : I had forgotten but this is actually the second time in a short time that a fablab is burned in France. Last time was last year when La Cantine burned in Nantes. There was no revendication at the time, but it was thought to be a criminal act.