How Velocity Can Change Data Storage And Propagation In Blockchain Nodes? 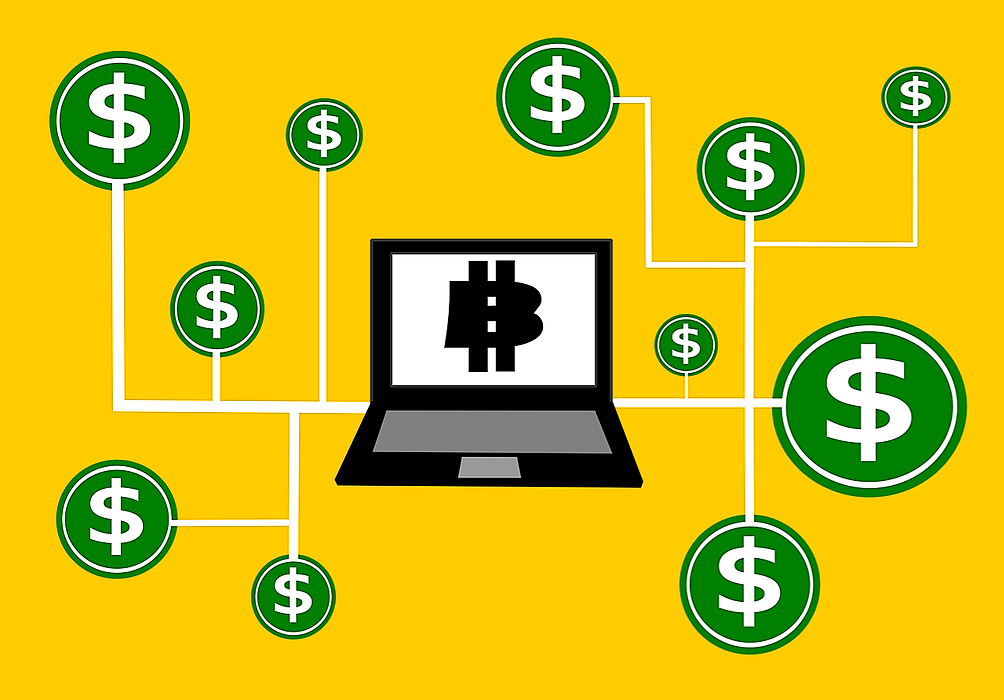 Blockchain technologies have been disruptive and propagate the democratization of the data. This has led to its wider usage and popularity. The blockchain paradigm has shifted from financial usage towards application development usages.

With the use of Blockchain technologies in the IoT(Internet of Things) paradigm, a new field of application emerged known as Autonomous Decentralised Peer-to-Peer Telemetry (ADEPT),

This is yet another autonomous communication approach among the devices that eliminates the mediator and which is quite similar to the Blockchain approach.

So the question here is “what are nodes?”

Nodes are the ones with which data is stored and shared through the blocks, which are batches of data used for better speed and scalability of the transactions. The conventional data propagation occurs through blocks towards several nodes throughout the network.

But, if the data is huge, the block size is large and the data is shared to every node in the network by the block until all the nodes do have new information and this renders slow data propagation.

That is where “Velocity” can do wonders and speed up the data propagation rates. Velocity uses fountain codes for efficient and fine-grained transactions that prevent any transmission over the interrupting channels. It provides much-needed transaction throughput.

We all know that Blockchain is a network of data shared in batches through several nodes with untrusted participants stored in a ledger and the same data is validated through the consensus algorithm by these participants.

When this information reaches the nodes, then it is popularly known as bootstrapping and further when such bootstrapped nodes are used for data exchange, such an exchange is known as Block Propagation.

There are several different approaches to Block Propagation:

This is an approach validated by BIP(Blockchain Improvement Protocol) for payload reduction. This approach works on the assumption that the necessary set of information has been already sent to the peers and only the set differences need to be exchanged with the nodes. 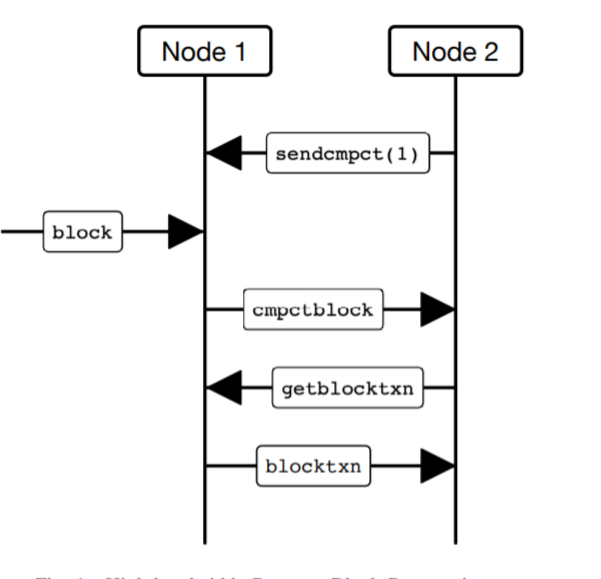 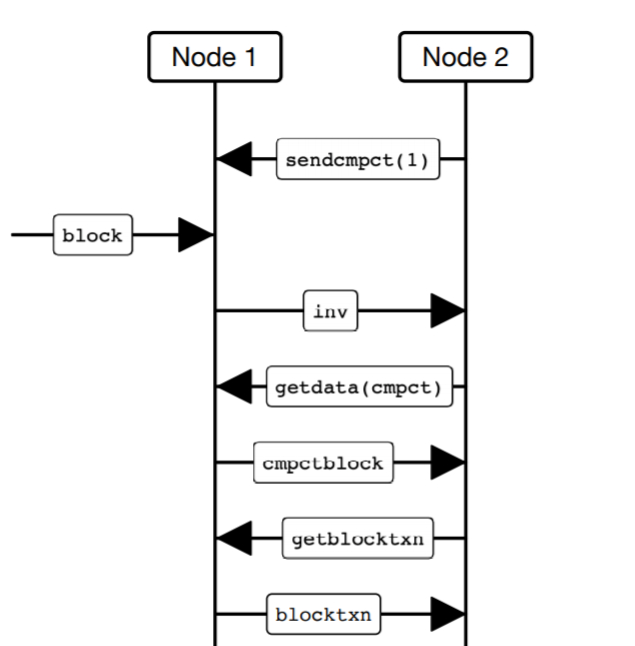 This approach provides an effective relay process though high and low bandwidth. It utilizes the extra bandwidth to stop the round-trip time(RTT). This approach reduces the payload size. Though there two major setbacks to ths approach:

Developed and proposed by Bitcoin Unlimited Improvement Protocol(BUIP), this approach uses bloom filters to compare the set differences more efficiently. It allows the detection of unknown transactions more efficiently and yet it adds overhead to the process of propagation through encoded membership information. There are security issues as the malicious nodes can send falsified filters to create a collision attack. 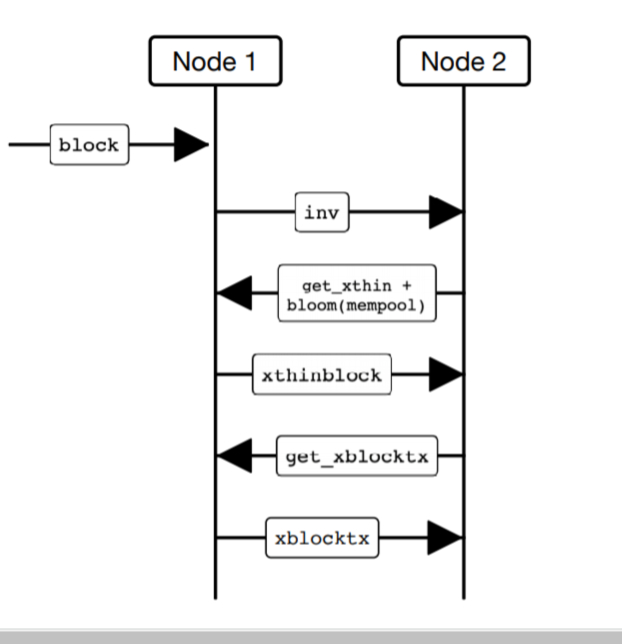 A new approach was proposed to mitigate the drawbacks of the Xthin Block method. It re-transmits the blocks to receive failures. It utilizes the single peer as the pivotal point with the node sending all the data at one go, instead of several nodes sharing partial data. These blocks are used only for block propagation and not for the node bootstrapping.

DHTs are used mainly for peer-to-peer discovery. The system involving the DHTs as the “initial seeder” - which is a single node responsible for the construction of the entire system, where a bootstrapping process allows the sharing of common DHT among several participants.

This approach reduces the issues that are observed in the above three approaches and utilizes the partial information possessed by nodes to be served as the new resource and mitigate the bottleneck or discrepancies of unknown transaction detection. Though there are two vital drawbacks:

Fountain codes- popularly known as the rateless erasure codes provides a unique way of encoding the information into segments that can be re-assembled as the original data, whenever the number of segments reaches the threshold.

As the reconstruction of the data is based on segments and not individual blocks, it renders a more robust and smooth transmission of data than the DHTs. Though the concept of fountain codes is quite useful in the Blockchain paradigm, it is not yet used in the Blockchain realm.

For Blockchain application, fountain codes can be ideal with a single piece of information being split into equally-sized elements. These elements are then encoded into specific “Symbols”.  These symbols are specific to the task and transmitted to the one or more sources, with a recipient aggregating the information.

This recipient encodes an algorithm for each symbol. Though the possibility of decoding an algorithm is almost zero and this is the sole reason. “Velocity” is used with fountain codes.

“Velocity”  uses the error-correcting properties of these fountain codes to allow Block propagation that is originated from multiple sources and has a simultaneous broadcast. 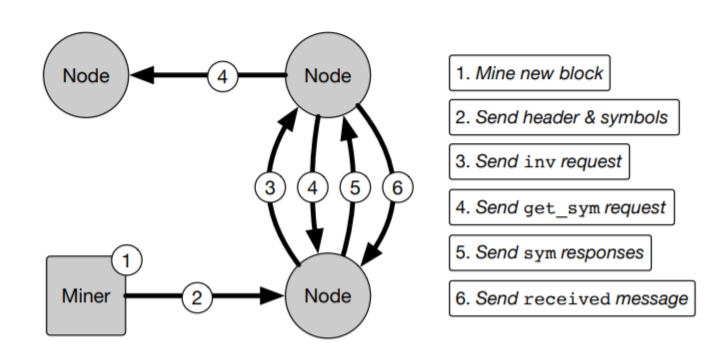 Mining pools often use historical data to determine the optimal size of the blocks for the revenue model. Sometimes the transaction fee does not justify the orphaning of the blocks. To mitigate these issues and decide the size of blocks in line with its transaction fee we can use two parameters:

These are Orphan Blocks not accepted due to the time latency of Block in the question during the Blockchain operation.

With “Velocity”,  the Block propagation can be optimized for better revenues that can leverage the financial incentives of Blockchain enhancement for corporates and enterprises. This method can certainly change the Blockchain processes to optimize the Block size, helping miners to achieve smoother and faster transactions with higher security.