How to Choose The Right Hashtag

You’ve probably heard this advice time and time again—if you want to get more Instagram engagement, use hashtags.

While that’s great advice, it does little to no good on its own. You see, just throwing random hashtags into your captions probably won’t get you the results you’re after. And just using broad/general hashtags isn’t always the right option.

So, how do you choose the right hashtags? Keep reading to find out.

What Makes a Hashtag “Good”?

First and foremost, it’s important to understand what a “good” hashtag is. A lot of Instagram marketers think a good hashtag is just one that gets used a lot. And while popularity does play a role, there’s a lot more that goes into picking the right hashtags for your next Instagram post.

The most important factor to consider when choosing hashtags is whether or not your target audience uses and searches for it. The whole point of using hashtags is to get your posts in front of your ideal followers. Then once you get that exposure, hopefully, they’ll follow you and engage with more of your content.

So if you’re using hashtags that your target audience doesn’t care about, at best, you’ll be attracting a bunch of people who probably aren’t interested in your brand.

Now that we’ve defined what makes an ideal hashtag, let’s dive into how to choose the right ones for your next Instagram post.

If you’re starting from scratch, the best way to get started is with a simple brainstorming session. You need to identify relevant topics and keywords for your industry/niche to start with.

You don’t have to get fancy here. Just create a simple Google Doc and start jotting down all the different keywords and topics that are popular in your industry. For instance, if you were a florist, you might write down things like:

Well, you get the idea.

Keep the brainstorming to simple terms and phrases rather than full sentences. You’re going to potentially use these keywords as hashtags (depending on how popular they are) or seed phrases to discover new hashtags, which we’ll talk about a little later.

Once you have a good list of keywords, start popping them into Instagram’s search feature. This will show you how many times the hashtag has been used, which will give you an idea of how popular it is. 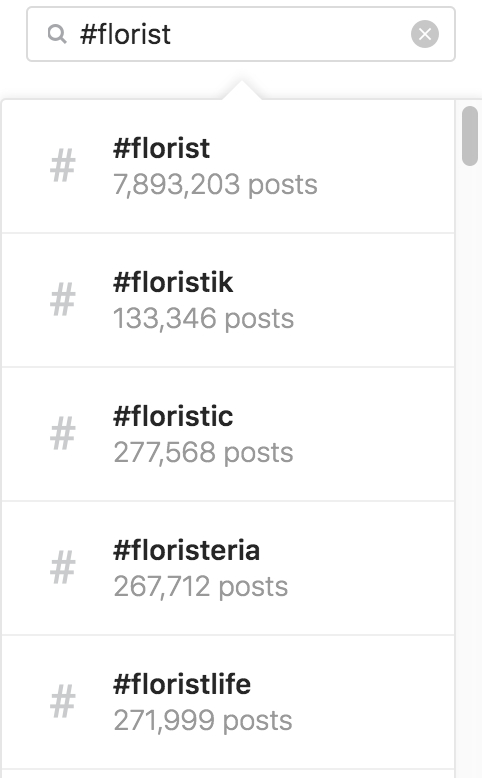 And just like that, you’ll have a long list of general hashtags relevant to your industry that you can plug into your posts.

Look at Your Competitor’s Posts

Another popular way to find hashtags is to just look at the hashtags your competitors are using.

First, identify the brands and influencers in your industry that have an active following and get plenty of engagement on their posts. Then, start browsing through some of their top posts. Look at their captions and jot down the hashtags they use.

While the hashtags might not be 100% responsible for all the engagement the posts received, they likely played a part. Trust us, they’re not just throwing these hashtags in there for no reason.

Try to categorize all their hashtags by subject. For instance, sticking if they use certain hashtags for food photos and others for photos of the outdoors, you want to take note of that. That way you can make sure you’re matching the hashtags with the appropriate photos/videos when you use them.

Keeping with our florist example, we could take a look at this florist’s page, who gets a decent amount of engagements on her posts. Looking through the captions, you can get an idea of what hashtags she uses to get exposure for her posts. 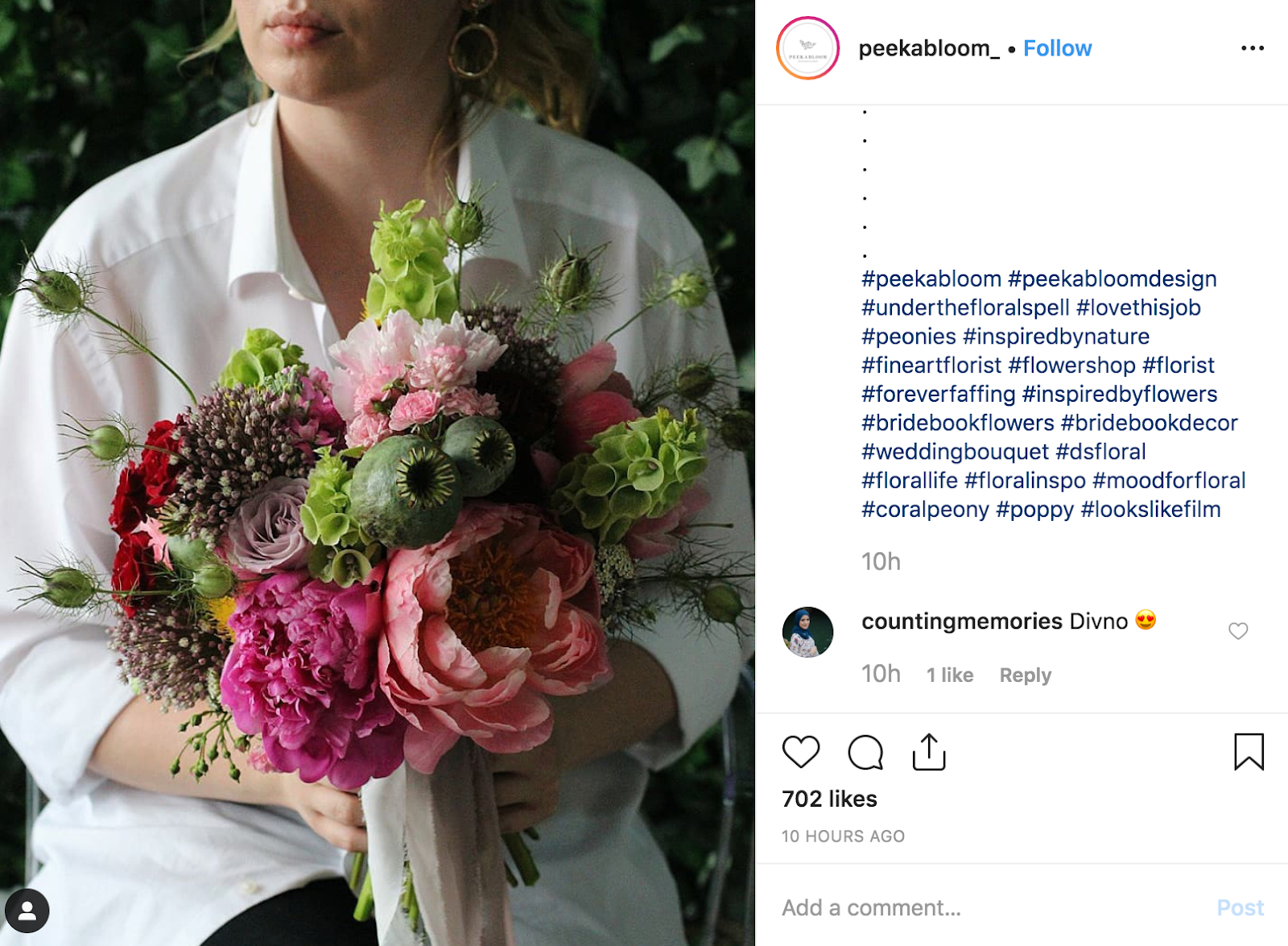 If you were a florist, you could use similar hashtags in your posts since judging by the number likes, they’re clearly working.

Use a Hashtag Tool

Up to this point, the tips we’ve given require a decent amount of manual work on your part. But if you want to get started quickly and without spending as much time setting up, you could look into using a hashtag generator tool.

My company has a tool, HashtagsForLikes, that makes it easy for you to quickly uncover popular hashtags relevant to your industry and even get useful data to make sure you’re choosing the right hashtags for your posts. 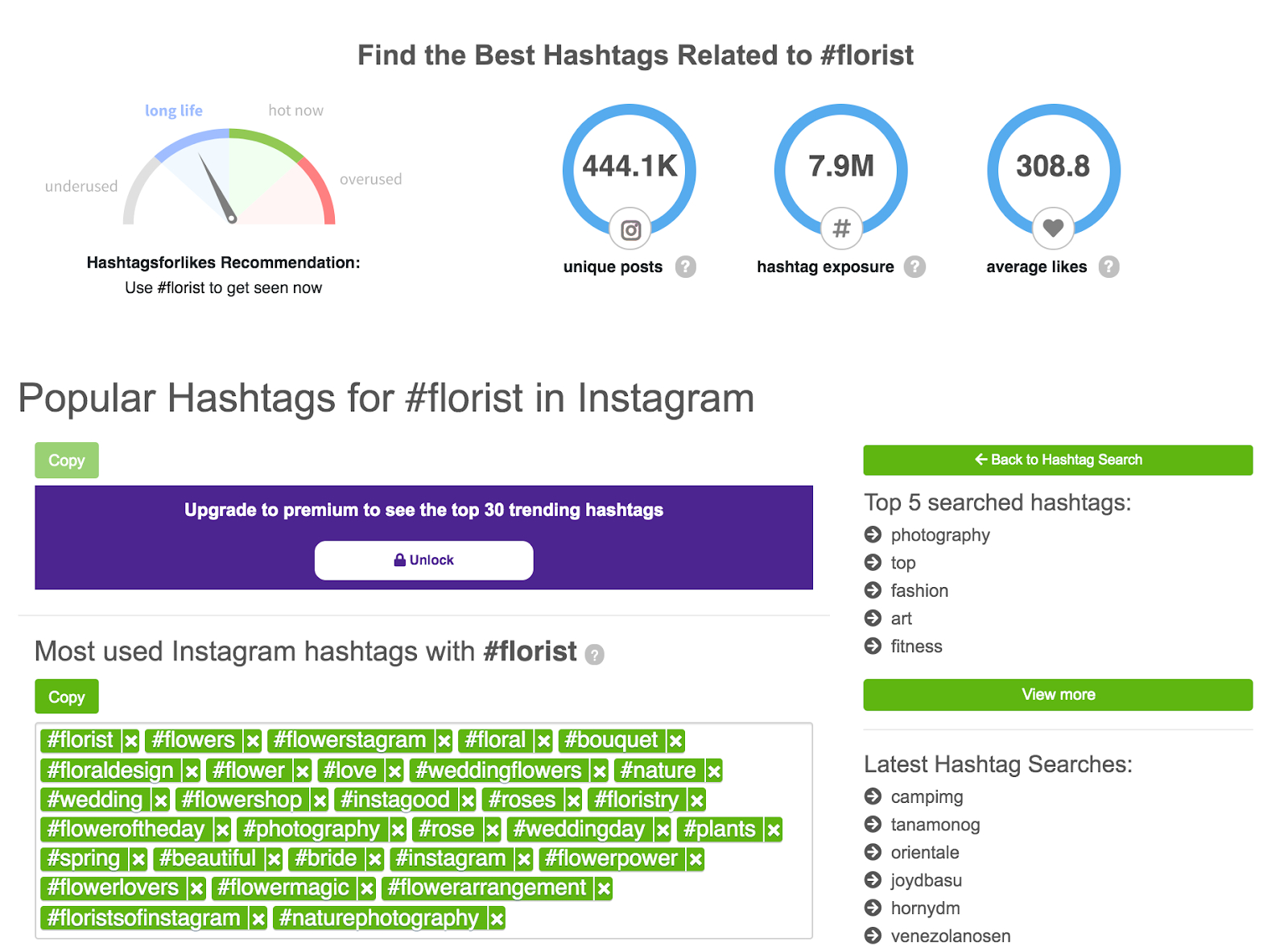 As you can imagine, this takes a lot of the guesswork out of the equation. Now, you’re making decisions on which hashtags to include based on data. That means you have a much higher chance of using hashtags that will actually give your posts exposure rather than just hoping and wishing someone sees it.

Another tactic you can use uncover hashtags that requires a little work, is to just rely on the Instagram app. Like we mentioned earlier, Instagram shows you how many times a hashtag has been used. But in addition to that, a lesser-known Instagram feature you can take advantage of is suggested hashtags.

When you search a hashtag on Instagram, the app will suggest related hashtags as well. 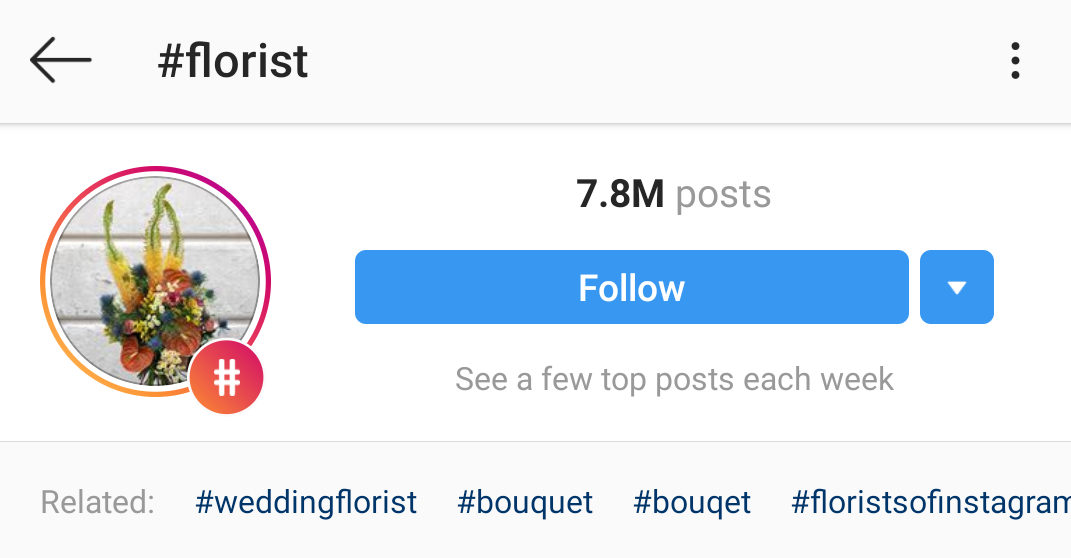 Jot down all these related hashtags in a doc so you can reference them for use later. Also, if you top on any of the suggestions, you’ll get even more suggestions related to that hashtag.

Repeat this tactic with as many hashtags as possible to come up with groups of related hashtags you can include in your captions at any time.

So far, the tactics we’ve gone over have been about finding hashtags that are highly relevant to your industry or niche. However, sometimes you might want to post about trending topics in hopes of making it on the highly coveted Explore page where Instagram shows all the most popular posts that might be relevant to a specific user. Or, you might just want to show up for time-sensitive hashtags like hashtags related to a specific event or holiday.

Whatever the case, you need to be on top of what’s trending in your industry or around the world.

A good way to find out what’s going on is to use Twitter. Now it is not a crime to use other social media platforms for ideas. Twitter has become one of the top resources for the latest news in pop culture or your particular industry. Take a look at what’s trending there, and there’s usually a good chance people are also searching for it on Instagram as well.

For instance, during major events like the Super Bowl, people will often Tweet about the commercials or specific moments during the game involving players. In those Tweets, they’ll use hashtags and after enough people use that hashtag it’ll start trending on Twitter. Once you’ve identified those hashtags, you can create an Instagram post about whatever the topic is and use the relevant hashtags in your post.

While this isn’t necessarily the most evergreen tactic since trending moments will start to die down after a while, it will give you some decent brand exposure if your post takes off. And although everyone who sees the post won’t be interested in your brand, you’ll inevitably get in front of people who may have never heard of you but will be willing to follow you.

How to Put Your Hashtags to Use

We’ve just gone over a bunch of different ways to find great hashtags for your Instagram posts. But finding the hashtags is only half the battle. You also want to make sure you’re using them correctly. Here are some tips.

Not all hashtags have the same impact. Some will get more engagement than others. And certain combinations work better than others. You need to test out all the different combinations to figure out what works best.

You can use a tool like Later or Sprout Social to track which of your posts and hashtags get the most engagement, and then start replicating the results.

Once you’ve uncovered hashtags that get a lot of engagement, don’t get stuck to them. Always be on the lookout for new hashtags and try different ones in your posts. You never know when you might discover a hidden gem that thousands of people actively search for.

If you’re manually typing out all your hashtags into every caption, you’re wasting valuable time. Instead, consider using a note-taking app to store all your groups of hashtags so you can just copy and paste them directly into your captions whenever you’re ready to post.

Some Instagram scheduling tools have a feature that’ll even let you save captions as well, which makes things even easier.

#Hashtag Your Way to New Follower

Start implementing the tips and tactics above and you’ll have a goldmine of hashtags that’ll get you more engagement in no time which will get followers. Just keep testing and repeating and you’ll have a huge audience of active followers waiting for your next post.