How I Deal With Differences in Opinion 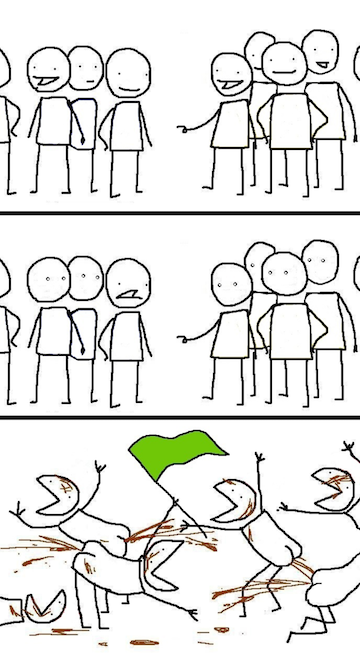 Being able to manoeuvre differences in opinion is key to building strong relationships in your work or personal life. It’s uncomfortable but inevitable if you want to mean something in an organization. I’ve compiled my notes over the years into this post.

Leave your egos out of the discussion. Two ways to do this:

1) Assume you are wrong by default
Even if you are 100% confident that you are right, entertain the other person’s perspective thoroughly. Allow your blindspots to be exposed, by listening to opposing viewpoints and understanding where they are coming from.

2) What’s best for the team > What’s best for you
When you enter the discussion to resolve a difference in opinion, your objective should be to reach an optimal decision as a team given incomplete information. As opposed to treating it like a battlefield where your sole purpose is to ensure your side wins. If in the discussion you are proven wrong about a certain point, as difficult as it is to, humbly accept it and move ahead. Don’t be intransigent about your position just to be seen as consistent.

All this is easier said than done though. Since your ego at a point of time is a function of the people present in the discussion, choose your Forum, i.e., the participants wisely.

The forum that you choose to engage in the discussion is foundational. There is a significant difference between having the discussion in the presence of 7 people in the room vs. a private DM on Slack. The forum determines the Tone. In a larger forum, you err on the polite side. I generally stick to one as small as possible.

Everyone forms an opinion on subjects — based on their past experience, what they are familiar with, and the kind of examples they can recall. It takes discipline to suspend yourself from the opinion you hold closely so that you can explore their side of the argument along with them. I attempt to do this by asking questions, in a non confrontational manner. This is a good way to purge yourself of biases.

My preference for early stage discussion is towards lower gear channels like Email / Slack as opposed to higher gear channels like In-person / Video Conference. This is for the simple reason that lower gear channels help you achieve clarity of thought more effectively than higher geared ones. There’s less room for an adrenaline fueled frenzy to kick in when you have to write things out, and read it once over before you hit send. It also gives everyone time to think things through and do some quick research before countering points that they are coming across for the first time.

In later stage discussions, everyone is already in sync about where different opinions stand. A higher gear communication like an In-person meeting makes more sense at this point, to drive the discussion to its conclusion.

A well prepared, research backed argument will complete 3/4 of the work for you. (The rest being presentation, eloquence, credibility, track record, etc) Gather supporting evidence and examples of similar successful applications. If you don’t have a stellar track record yet, no one is going to care about your “intuition”. So arm yourself with data. It gets way harder for someone to shoot down arguments when they are presented with compelling support for it. Research all sides of the argument, including the opposing ones.

Sometimes arguments go in circles. Given that a lot of times we are forced to make decisions based on half information, there is no clear “better” idea. Someone has to backdown in the interest of saving time. If I don’t feel as strongly as the other person about the point of the discussion, or think both opinions are equally valid, I backdown first.

Sometimes there are no right or wrong perspectives. More than one can co-exist. This is where the leader steps in and decides. They get to play the “intuition” card, and are allowed to do so because of their track record. That is why they are the leader in the first place. On the other hand, they too will have their own set of biases at the backdrop of which they make the decision. This is where things like Trust come into the picture. You have to trust the leader to make the decision that they believed was most likely to succeed. Understanding this helps one move on quickly from not having your opinion accepted.

Having had the discussion itself would have still been helpful for those involved. All sides have now been exposed to the same problem but from various angles. Diversity in ideologies and opinions are valuable, if they are handled maturely by everyone.

Related Stories
Subject Matter
Recycling Spoiled Milk to Make Fashionable T-Shirts by @alahausse
#sustainable-development
Global Economic Impact of AI: Facts and Figures by @sharmi1206
#data-science
How To Be More Productive with Pomodoro Technique and Google Calendar by @vineethv
#productivity
Bad Idea Or Bad Luck: I Want To Know Your Opinion by @eko
#product-management
How Augmented Reality (AR) is Changing the Recruitment World by @nimisha
#virtual-reality