The Head of the House of Bitcoin, the Man with the Mask, the Unknown, the one who calls himself Sir Satoshi Nakamoto is the one who brought the Power of Cryptocurrency to the world.

Sir Satoshi, the Man with the Iron Mask wrote on his white paper: “With e-currency based on cryptographic proof, without the need to trust a third party middleman, money can be secure and transactions effortless”.

And added “It’s completely decentralized, with no central server or trusted parties, because everything is based on crypto proof instead of trust.”

Bitcoin’s Kingdom is not material, it’s power derives from the people's will

And that way, in January 2009, the Bitcoin Kingdom came into existence with the release of the first open source Bitcoin Blacksmith and the issuance of the first crypto weapons.

Embedded in the coinbase of the Genesis Sword, as and advice to evil Banksters, was written:

“The Times 03/Jan/2009 Chancellor on brink of second bailout for banks”.

The first years of the Bitcoin Kingdom

Bitcoin was the first crypto in existence. On the early years only few people joined the Bitcoin Kingdom. Computer geek warriors and after some time fighters for economic liberty were the only supporters of Sir Satoshi Nakamoto. 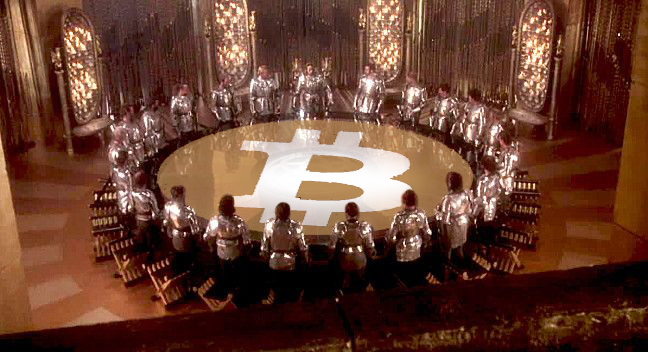 Bitcoin Lands were ruled by Decentralization and all decisions about the Kingdom were taken by consensus on the Dev Round Table.

On May 22nd 2010 the House of Bitcoin won its first skirmish against evil Fiatland troops and warriors won a Huge Pizza that they enjoyed partying around the table. From then on, that day is known as “Pizza day” in Bitcoin Kingdom.

After eating their pizza, on July 2010, the Bitcoin warriors went out again for war against evil Fiat Kingdom. Bitcoin lands extended 10 times its size, from $0.008 cents to $0.08 USD per 1 BTC.

July 17th MtGox Cryptocurrency weapon exchange was launched, increasing the size The House of Bitcoin and the power of its Crypto Warriors .

The House of Bitcoin was starting to be noticed by Bankers.

First because it was a new type of money out of their control.

And second because Money is Trust, and Bitcoin had shown to be, by far, more trustworthy than fiat.

Bitcoin and Crypto journey towards Victory

Bitcoin has started its adventure on the West side of Volatility Island on 2009.

In order to arrive to the B.I.S. CryptoWarriors will have to go through the Money Printing Canyon, facing the dangers of the Bubble Peaks in one side and the Great Bear Forest on the other side where they can stay lost for years while being attacked by the SEC wolves.

Some Cryptowarriors will lose their lives in the 100x Leverage Lake or will be robbed by bandits in a centralized exchange swamp.

After the Money Printing Canyon, Crypto Warriors will have to cross the Negative Interest Rate Channel where bank sharks await with endless fiat credit trying to sink sailors into debt.

Those who survive will get to DieStaat (The State) Continent seashore safely, but here is were real dangers await.

They will have to go through the Quadrillion Derivative mountains and then the humongous hazards of the dark Insurmountable Bureaucracy Forest. IRS waits there with it’s big mouth.

And finally the ALL SEEING eye of the B.I.S.

It is protected by the power of the Deutsche Bank Volcano $50 Trillion derivative bubble that can start a chain reaction with Commerzbank, CitiBank, HSBC, Bank of America… and a long list of financial heavy weights.

This financial leviathan is ready to burst and liberate all the poisonous Quadrillion derivative magma from inside the depths of the Fiatland Empire.

This is a long awaited event by the Money Masters as they will be swallowing all the Fiatland people’s wealth and savings, specially those happily swimming on the Ponzi Pension River.

“Cryptowarriors will have to go through the humongous hazards of the dark Insurmountable Bureaucracy Forest, where IRS waits with it’s big mouth.”

Many other Cryptos have been joining Bitcoin in its journey to the heart of FiatLand, the B.I.S.

A journey that can take all the enslaved peoples of FiatLand to finally destroy Baron RedShield and the Central Banking Hydra.

Will Crypto destroy the B.I.S.?

Will it be able to overcome all the dangers of FiatLand?

Will the Decentralized Cryto Kingdoms finally set free the peoples of Fiatland?

But the price for the patient Hodler is generational wealth and prosperity. So be ready to fight long and hard!

Disclaimer: The author of GAME of CRYPTOS is associated with HEX on the referral program. Any link to the HEX official website gives you +10% HEX on any buy or FREE claim. Thank you!

Related Stories
Subject Matter
Join Free TON Community and Participate Contests! by @Free TON
#promoted
GAME of CRYPTOS  [Chapter 5 ] - The Token Apocalypse by @Khaleesi
#crypto
Why Kubernetes Is The Best Technology For Running A Cloud-Native Database by @jscarp
#kubernetes
Why Would Anything Ever Go Right? by @ted-wade
#economics
Unique NFT Use Cases: What’s Beyond NFT Art? by @michielmulders
#crypto
A PSA to Bitcoin Newbs by @brettschor
#bitcoin
The Pandemic of Childcare by @linh
#hackernoon-top-story