DeFi - Scratching The Surface To See What Lies Underneath 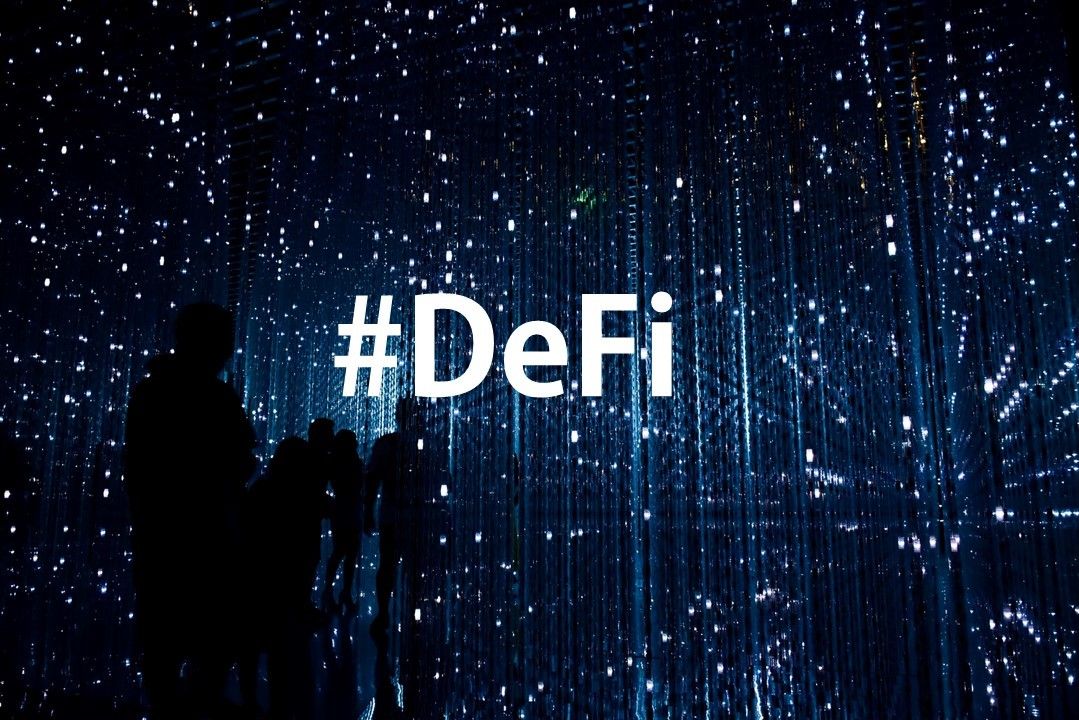 The DeFi frenzy has got the crypto world in its grip. Recently listed DeFi projects, such as MantraDAO, DeFiPie and PlutusDeFi, have generated a significant amount of interest. Simultaneously, existing DeFi platforms like Uniswap, Compound and Aave, have seen a tremendous increase in usage.

And it’s not just an increase in use cases that has fueled this DeFi frenzy; there’s enough theatrical in the world of DeFi to keep the crypto enthusiasts glued to their seats.

For example, on one hand we have yearn.finance (or yEarn), whose governance token YFI started trading at almost 0 and skyrocketed to 3.3 times the price of Bitcoin on 31st Aug, 2020, despite its creator Andre Cronje publicly announcing that YFI has “0 financial value”. On the other hand, we have experimental DeFi protocol yam.finance, whose token YAM crashed from $167 to $0.65 within hours on 13th Aug, 2020, (due to a rebase bug) forcing its creator to tweet an apology.

And not to forget the numerous YFI clones that have flooded the market, all seeking to repeat the success of their predecessor!

DeFi – A Look at the Technicals

Projects have been working in the DeFi space for a few years now. Wanchain, one of the darlings of the 2017 ICO craze, was one of the earliest DeFi projects as well. DeFi platforms have been gaining traction since the middle of 2019, with the value of digital assets locked up
in DeFi markets gradually increasing over time. On 7th Feb, 2020,
the total value of these assets crossed the $1 billion mark. At the time of writing this article (2nd Sept, 2020), this amount has grown almost 10 times, and now stands at a staggering $9.1 billion!

Today, DeFi has grown to become an increasingly important instrument in bridging the gap between fiat currencies and crypto assets. And the party is far from over. New blockchain projects are joining the DeFi bandwagon, introducing innovative solutions to problems faced by cryptocurrency
enthusiasts. Here I’ll explore some of the upcoming DeFi projects, which can make a splash in the coming months. 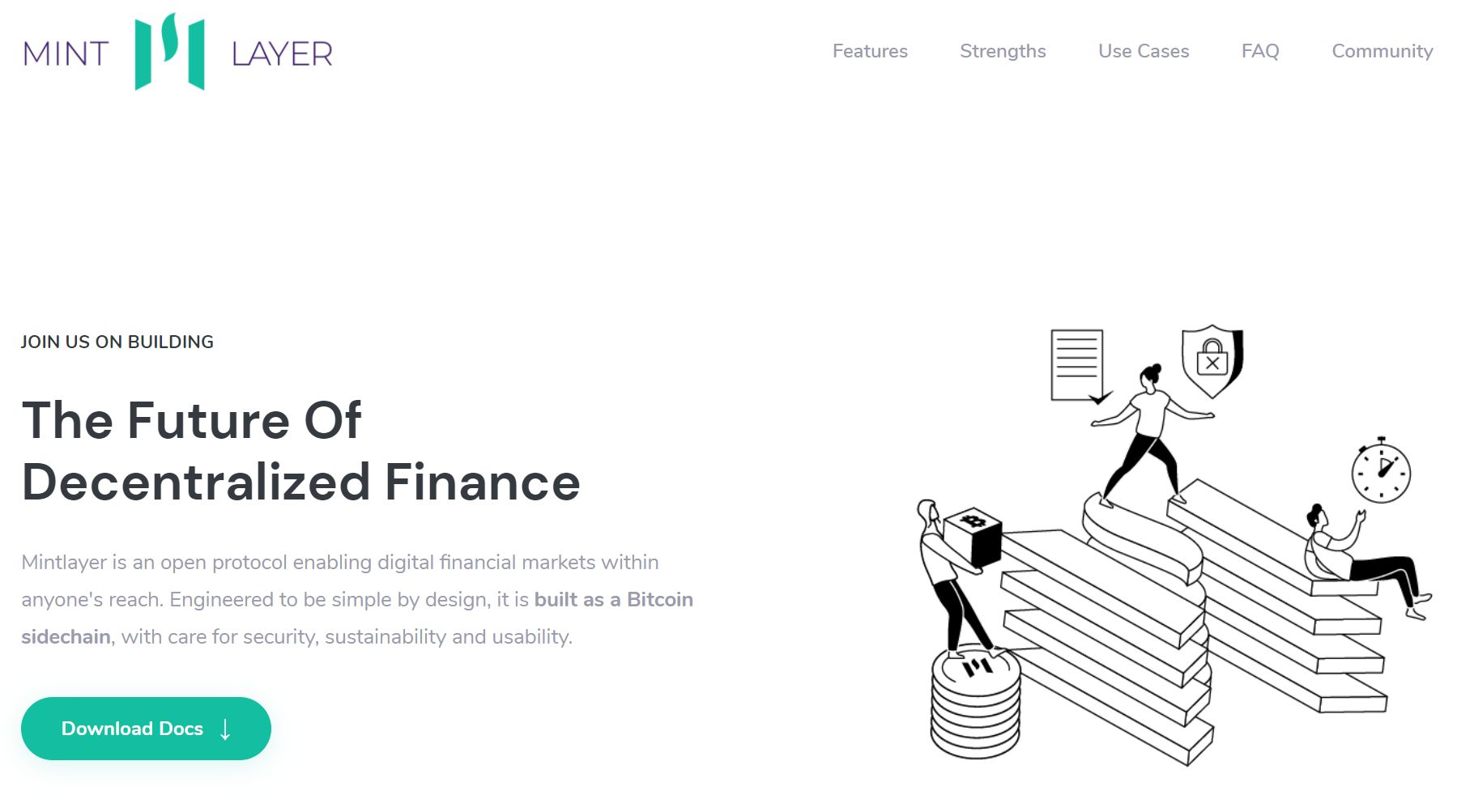 Mintlayer is introducing DeFi to Bitcoin, through an open and specialized protocol developed as a sidechain on Bitcoin’s blockchain. Mintlayer claims that users would now be able to access DeFi applications and decentralized exchanges, simply by holding Bitcoin in their wallets. Project funding details or any plans to conduct a public sale have not been announced yet.

Mintlayer supports the latest technologies developed for Bitcoin, such as Lightning Network, UTXO structure, signature aggregation with Schnorr scheme, and CoinJoin. Mintlayer uses a unique PoS-based consensus algorithm called Dynamic Slot Allotment (DSA), which is supposedly more secure than regular PoS. Mintlayer blocks are generated at 5 to 10 times the speed of Bitcoin, and every block includes a reference to a Bitcoin block’s hash. During a round (which is a period of 1008 Bitcoin blocks), the participants alternate in the role of leaders and blocksigners, as set by the slot order determined at the end of the previous round.

Mintlayer incorporates a checkpoint system to prevent long range attacks, whereby all blockchain transactions up to the checkpoint are considered as irreversible. Checkpoints are built-in mechanisms of the protocol which prevent 51% attacks even if a node has accumulated 51% of the total stake – if the node tries to fork the blockchain starting from a block before the checkpoint, the forked chain will simply be discarded. Mintlayer transactions do not occupy space on the Bitcoin blockchain, only network checkpoints do.

Unlike Ethereum, Mintlayer’s smart contracts are Non-Turing complete, which are more resistant to hacks and malicious behaviour. This design
approach substantially increases the safety of user funds locked in DeFi applications, avoiding scenarios like the recent Uniswap hack. Developers can also issue tokens (including security tokens) on Mintlayer, and define parameters like Access Control and Confidential Transaction (which hides the amount and asset type for such token transactions). Mintlayer’s protocol allows token creators to meet the regulatory framework, and issue tokens with particular features in order to be fully compliant with legal restraints.

Mintlayer’s blockchain provides the option of wrapping different cryptocurrencies. Using a “Peg-in/Peg-out” model, the tokens are locked in their native blockchain, and their wrapped versions (such as m-BTC or m-ETH) are issued on Mintlayer. This enables users and exchanges to use just a single wallet for dealing with multiple tokens. Users can trade pegged-in cryptocurrencies and tokens created on Mintlayer’s platform, and perform cross-chain trades with Bitcoin, all from a built-in DEX accessible directly from their wallets. Moreover, tokens from distinct blockchains that are pegged on Mintlayer can be sent together in one transaction (using transaction batching), saving both time and fees.

MLT is Mintlayer’s native utility token. All MLT tokens will be pre-mined, and no new tokens will be created as minting rewards. Developers issuing new tokens on Mintlayer’s blockchain would have to pay in MLT tokens. Nodes which want to be elected as block validators would have to stake a minimum amount of MLT. On the other hand, MLT would not be necessary to pay gas fee for transferring assets. For example, a user who is transferring USDT on Mintlayer’s platform can pay fees directly in USDT. 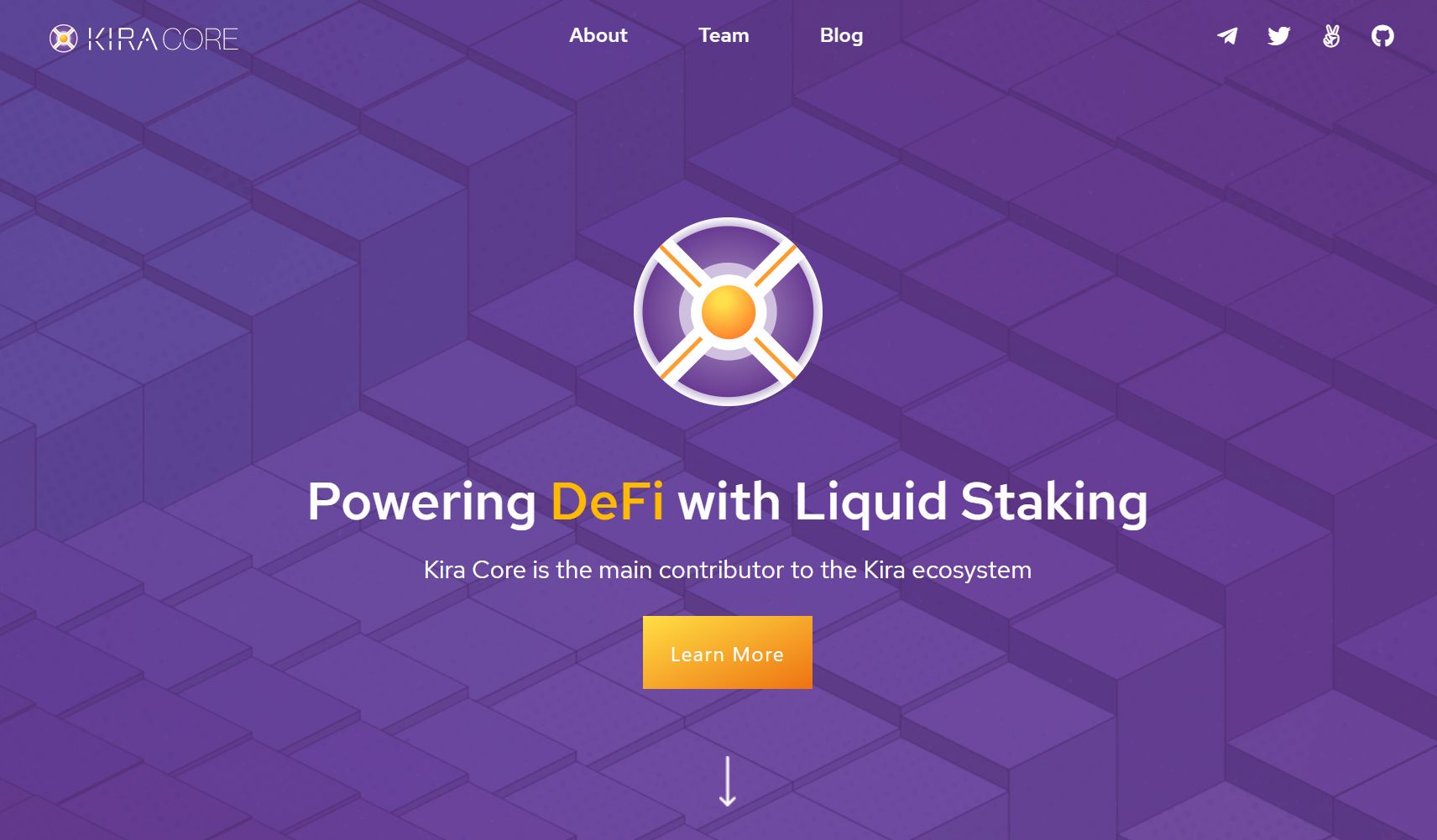 Kira Network is creating a full stack cross-chain DeFi ecosystem, which will offer trustless services like staking, trading, crowdfunding, and DApp development. Kira’s team successfully closed its seed investment round, which was funded by private equity firm Ascensive Asset Management and Alphabit Fund, for an undisclosed amount in August. Kira has also raised $2.2 million in a private round, and is planning to hold a public round in Q4, 2020.

Kira is built using Cosmos SDK on top of Tendermint. The Kira Protocol (IXP) employs a unique consensus mechanism called Multi-Bonded Proof
of Stake (MBPoS), which allows delegators to stake multiple digital assets (cryptocurrencies, stablecoins, and even NFTs) from different blockchains simultaneously. This secures Kira’s network by the underlying value of multiple cryptocurrencies (and not just one token), each with its own token distribution scheme and unique centralization risk. Moreover, Kira’s pool of whitelisted assets is routinely changed, making it extremely difficult for potential attackers to launch a 51% attack.

Kira has developed the Interchain Exchange, a scalable and trustless asset exchange. IXP implements independent and interconnected shards, which enable asset trading in a completely parallelizable manner. Traders can also stake their cryptocurrencies and earn passive rewards. Liquidity is provided by issuing staking derivatives for the staked assets, which can be traded or transferred at will; the actual assets remain locked by the network, open to slashing (in case the validator node misbehaves). If part of the staked asset gets slashed, only the remaining portion can be claimed using the derivative.

Kira uses Cosmos IBC and Polkadot XCMP for inter-chain connectivity,
enabling the trustless transfer of assets over networks. Staking assets enhances network security and improves trading liquidity, which increases revenue from the network fee and encourages more people to stake. IXP
is arguably the first DeFi application that is powered by the liquidity of assets at stake. Kira claims that the exchange can provide transaction
throughput and user experience similar to centralized exchanges, while ensuring that funds remain completely under the users’ control like decentralized exchanges.

The native token of Kira is KEX (Kira Protocol Token). Staking KEX allows delegators to acquire portion of block and fee rewards, and is the most
efficient way of claiming revenues from protocol operations. KEX holders can also become part of the governance and the validator set of Kira’s network. Kira’s governance can define interest rates for staking foreign tokens. Such decisions determine which assets users are more likely to stake, which in turn directly impact the network security and asset liquidity.

Kira has also conceptualized the Initial Validator Offering (IVO) model, a
unique crowdfunding mechanism where investors stake existing tokens over one or multiple PoS networks to “interchain-mine” a new token, pegged to the value of their old token(s). Kira claims that an IVO enables investors to maintain full custody over their existing tokens while interchain-mining new assets. If investors get disappointed with the project’s progress, they can immediately withdraw their funds. This will reduce the risk of investing in start-ups and encourage more people to participate, which will help genuine projects in the long run.

Stafi (or Staking Finance) is developing a trustless DeFi protocol that will unlock the liquidity of assets staked in PoS blockchains while simultaneously enhancing their security. Stafi has raised a total
of $880,000 in its seed and private investment rounds, from the likes
of cryptocurrency exchange Bitmax and DeFi focused investment fund Spark Digital Capital. Stafi has also received a grant from the Web3 Foundation, and is planning to raise another $110,000 in a
public sales round in September.

Stafi’s protocol has been developed using the Substrate framework created by Parity. Stafi is connected as a parallel chain to Polkadot, and shares its underlying consensus and security schemes. Polkadot is Parity’s
decentralized multi-chain protocol, which connects private chains, public
networks, oracles, and other entities. Stafi (and Polkadot) use a modified PoS algorithm called Nominated Proof of Stake (NPoS), where an unlimited number of token holders nominate a large but limited number of validators. This leads to a multi-winner election process, where each nominator votes for multiple candidates, with the vote strength being proportional to their stake.

The problem of illiquidity of staking is solved by Stafi through Staking
Contracts (SC), which mint rTokens (reward-Tokens) when a user stakes PoS tokens. For example, a user can stake ONE tokens to the ONE SC to receive an equal amount of rONE tokens. rTokens can be used in DeFi
applications, traded in exchanges, retained to receive staking rewards, or
redeemed against the staked tokens. Since SCs are built on Substrate, they are not ERC-20 compliant; however, Stafi plans to develop Stafi-Ethereum bridges to allow the rTokens to be swapped to ERC-20. Finally, if a validator gets slashed, then the corresponding delegators will suffer stake loss as well.

Stafi’s native token is FIS, which is used to pay transaction fees on the Stafi chain, and mint or redeem rTokens. FIS holders can participate in the network governance, and vote for decisions related to Stafi’s development. Nodes can also stake FIS to secure Stafi’s network, and join as Stafi Validators (SV). The possibility of becoming a validator depends on the amount of tokens staked. Apart from SVs, Stafi’s ecosystem also has Stafi Special Validators (SSV), which are elected from amongst the SVs to oversee the security of SCs.

Substrate uses a hybrid consensus mechanism called BABE + GRANDPA. BABE is responsible for the block selection process, where a validator can achieve block weight by staking FIS, or by being nominated by delegators who stake FIS. GRANDPA determines the block finality; after the new block is confirmed, the chain that was voted for by more than two-third of the
staked FIS becomes the final chain, and its latest block producer is rewarded the minting fee.

The first testnet of Seiya, which is the main network of Stafi, was rolled out in July, 2020. This was followed by Stafi’s incentivized testnet Sitara, where validators were rewarded FIS tokens for assessing the robustness of Stafi chain and the SCs. Stafi has also run multiple StakingDrop campaigns,
in association with other PoS projects like Tezos, Matic and Harmony, where participants were airdropped FIS tokens for staking the corresponding PoS tokens in the network for a fixed duration.

Is there any project that you think belongs in this list? Do mention in comments, and I’ll be forever grateful to you if I come to like it.

PS – The author has no vested interest in Mintlayer, Kira or Stafi. This article is only meant to serve as an introduction to projects which are trying to create innovative products and services in the world of DeFi. Please do your own research if you’re planning to invest in any of them. 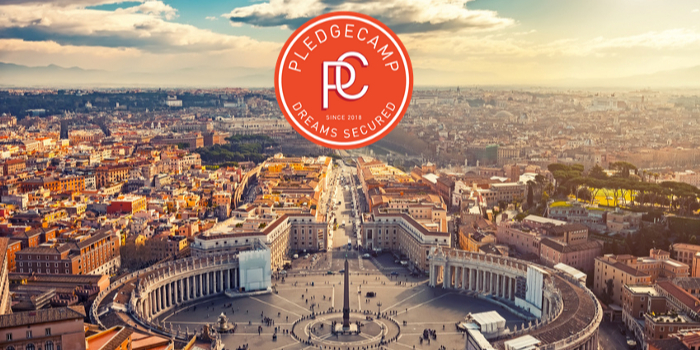