Choosing React Native Over Hybrid Apps: A Big Win for the Startups in 2020 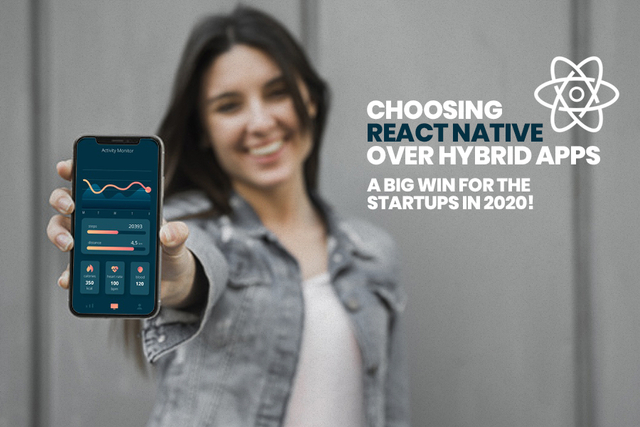 When you start with a tech startup company, numerous tasks tend to knock your door. Starting from choosing the right domain name to signing up of various tasks, everything needs to be looked upon. Amongst which selecting the right platform for the website and applications is one of them.

Yes! Every startup has to go through the process of deciding the right platform.

Some of the essential key factors that tend to turn a startup idea into a successful one include strategizing budgets, going with the market demand, framing up solid gon ahead plan and many related things.

And with the adoption of react-native by mobile app development companies, the platform has become more popular is the market. It has provided users to construct separate apps for both Android and iOS. This framework is known to develop a futuristic native mobile app for business.

But the question is:

Can react native suppress the power of the hybrid app and bring benefits to the startup organizations?

Can it offer things that hybrid apps doesn’t?

Would it be able to fulfil the needs of a startup?

Let us find out the answers to these questions.

React Native and the Current Scenario

According to the survey conducted by App developers magazine, more than 9.7 M developers use javascript, which tells us that the cross-platform approach is becoming the first choice of mobile app development company and startups. 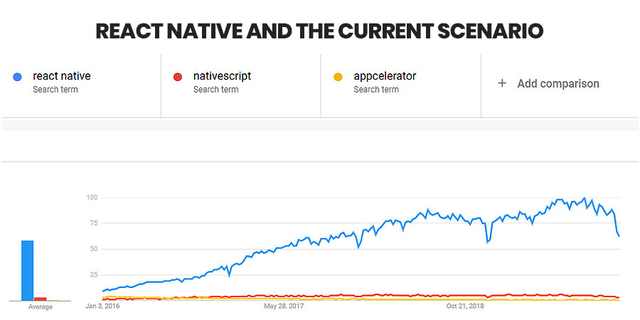 Therefore saying that react native is going to rule the market in the coming years won’t be an understatement. If you are wondering what exactly does it offer to the developers out there, and why it is the supreme power nowadays then let’s march down to the features related to it

The idea and the approach to target your potential audience needs to stand out in every possible manner.

Some of the essential things that every iOS App Development Company or Android firm need to consider before constructing an app for your startup should be:

The idea behind making the app

Tends to integrate with all the operating system

Honestly, when you get things started in a startup business, you need to know the factors that would influence your project and services that you are offering. React native is an example of those frameworks that tend to solve core issues, core issues that include:

The difference in the codebase

There is an ample number of react native app development company that tends to provide this service. But the question is why and how can react-native help the users out there.

This is apparently one of the most meaningful advantages and one of the most crucial reasons why startups choose to react-native. It is well known for faster app development which exactly is what a startup would need. The development services are cheap because they involve reduced efforts. With the help of react-native applications and their assistance, the tasks are completed sooner. The codes that are framed for one platform can be used for other also. In some cases, it even cuts development effort to 50% without actually scarifying productivity.

Reactive native applications are well known for its quality and ability to deliver a consistent user experience across various mobile platforms. The users would always desire for an error-free experience and needs a responsive app. Being so efficient that it provides the user with adequate loading speed, they tend to adjust to different screens immediately.

Javascript is used as the framework’s core development language, which only means that there are minimal chances of ending up with the flaws or any breaches. The user would be glad to know that the apps that are constructed with the help of react-native have fewer chances of getting hacked. It is nearly impossible for hackers to hack a react natively developed app. This tends to make this app quite reliable and supporting.

React native is the only known app which provides cross-platform abilities — created by the team of Facebook. The iOS support was launched in the year 2015, and after that year, Android supported the framework. Since then, the popularity of the framework reached heights. With this framework, the only thing that you need to worry about is to hire mobile app developers that are professional enough to provide you with every feature of react-native. Even for the beginners, they can construct an app by leveraging strong support from the community of developers.

This can be one of the solid reasons why choosing react native is the best option for you. With the help of this framework, the user doesn’t have to construct codes for two platforms, i.e., Android and iOS. This not only eliminates the need to learn and execute the two dialects, but it also helps in fractioning up of time. This makes it clear that the user saves a lot of time. They then tend to invest in testing and updates. This increases proficiency as well as increases the performance.

React native is fast as compared to other frameworks, and thus it tends to offer effective services to both the users as well as the developers. However, rapid development depends on the massive variety of factors like several stacks that are likely to deploy, the type of app the user is creating and many more related things.

There is no need for users to operate the whole project again and again. If it happens, then the user only needs to change the bit of source code on the react native framework. With the help of a unique feature which is known as the hot reload the user can quickly check the changed lives.

One of the biggest reasons for choosing up react native for a startup development organization is the presence of many third-party integration applications. They allow the startup not only to add many additional features to the app.

For example, react-native helps in connecting the plugin with the help of native modules.

With the widespread adoption of JavaScript, developers can accelerate the updates straight to the user’s phone. They do not require an app update cycle.

The users, therefore, can enjoy the renewed version. Moreover, the comprehensive plan is smoothly and straightforward the task. Virtually, Microsoft’s live update setting CodePush SDK is integrated with the React Native app so that push notifications can be applied to the app. 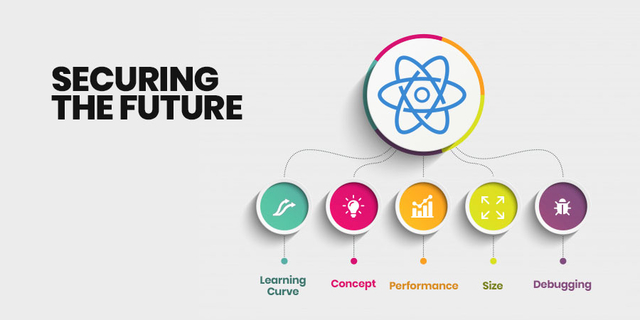 The code that you write for react native is reusable; the user only needs a single update for the two platforms, which further simplifies the bug detection capabilities in the codebase. The whole interface of the react-native tends to be standard and spontaneous. Therefore, being intuitive tends to be helpful for the developers that can understand the code quickly and thus tends to save time and cost that then transforms the web project in the mobile application.

Android & iOS app development company, both are assured with a bright future. Moreover react native is one of those frameworks that are not likely to go away at any point. The framework continues to mature and strength up to its place in the market.

Tech Giants that use React Native 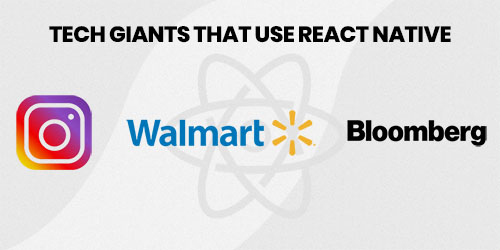 Before you hire react native app developers check out some of the biggest tech giants that have trusted and worked well with react native.

Instagram: The development team of the platform stated that after using react Native, they substantially improved the velocity of the developer. 85% to 99% of the code was likely to be shared by android and iOS. The team tends to deliver the app faster than they do to native solutions.

Walmart: Walmart is striving to become one of the largest online retailers, with high expectations, the organization wanted to take a step involving high risk to acquire a competitive advantage. They adopted various technologies that led them towards the react platform. The platform offered them excellent performance and nearly identical native app features with seamless animation.

Bloomberg: The organization tends to offer an interactive experience with simple to access personalized content, videos and live feeds. React Native was chosen because it helped them to automate codes that later refreshed the functions while accelerating the release of new product features. The made the app instantly reloads than recompiling.

React native, by all means, is considered to be one of the most used frameworks and is considered to have the highest performance among all the frameworks. NO matter if it is an Android centric organization, react native is one of its kind. With the help of these technologies, tends to consist of a natural look and feel. Indeed react native is better and unique than other similar platforms. Yes! There is no doubt to the fact that it is an excellent platform that has a smooth learning curve and tends to offer outstanding performance. Not only this, but it also interfaces with native apps.

Moreover, the framework is considered no less than the future of the hybrid app. And when development cost is taken into consideration, then there is no other framework than react native, which tends to be an excellent fit for you. Therefore, now you know why numerous platforms tend to opt to react-native.

We hope that this article has brought about great information to you. If you have any doubts regarding the following topic and if you wish to talk to any of our experts, then leave a comment in the comment box below. Our experts would try to solve the issue and provide you with aid and solution.

Dislaimer: I am associated with Xicom. For further query, get in touch here.