When you are looking for a software development partner for your app idea you obviously want to make sure, that your product will be developed in the best technology possible.

But that’s the thing - there is no way of determining which one is “the best”, before hearing out about what you want to develop in detail. Sure, you can rely on languages and frameworks popularity statistics, ask the Redditors or choose the same stack, that your competition use but it’s not going to give you 100 % confidence, that you’ve chosen well. But it doesn’t mean, that you can’t get really, really close to that level of confidence!

As we sorted that out, it’s time to dive into Ruby on Rails and Laravel application examples and a bunch of other Infos, that will help you to take well-educated decisions when it comes to your app development idea.

What is the difference between a framework and programming language?

When it comes to Ruby on Rails framework, Ruby is the language behind it. Other examples of Ruby frameworks are Sinatra, Padrino, and Cuba. The same goes for Laravel, which is written in PHP. CodeIgniter, Symfony, and CakePHP are other frameworks written in this language.

Ruby vs PHP: Similarities and Differences

Let’s take a quick look at what are the differences and similarities between both of those languages from a developer's point of view. Even though it is not crucial for you as an entrepreneur, it may be helpful for your company CTO to see some comparison between those two programming languages. For more specific info on this matter, go read our article Ruby vs. PHP - Which One Is Right for Your Project? 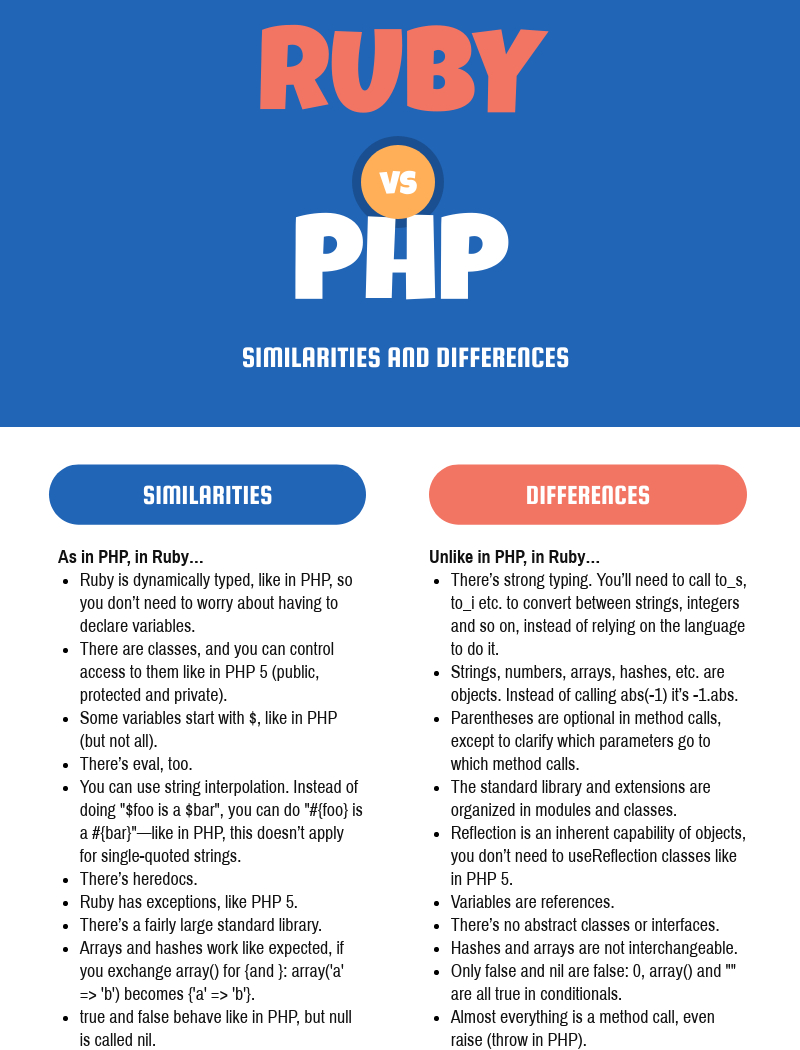 When it comes to both of these frameworks, they are the most popular ones both for Ruby and PHP. Yet they vary greatly when it comes to maturity, community and other aspects, that can determine your project success.

Ruby on Rails first version was published in 2004 by David Heinemeier Hansson and is currently available as version 6. It began as a side-project and a way to improve the development process in Basecamp startup. Being quite an old framework, is, in fact, an advantage for Rails.

It has one of the biggest communities, stable, secure and up to date mature technology. Other apps developed in RoR examples are GitHub, Netflix or Shopify.

Laravel is much younger as it was released in 2011 - this PHP based framework advertises itself as a “framework for Web Artisans” and for “people who love beautiful code”.

As this framework doesn’t have so rich and long history as RoR, it’s harder to mention some big brand websites built in Laravel, but you can see some of the examples here.

Ruby on Rails vs Laravel: when to choose which?

Let’s get down to the essence of this article, shall we? Find below some examples of apps and products, that are better to develop in Ruby on Rails vs Laravel.

… you’re building an e-commerce solution - a huge, e-commerce giant Shopify is powered by Ruby on Rails, so that sorts it out. Let’s not forget about Spree Commerce as a RoR e-commerce alternative. Gems available in Ruby on Rails will help you to implement every e-commerce feature that you could ever need. Thanks to RoR, you will also be able to det your store up and running very fast. Gems will enable you to set up your payment gateway, marketing emailing campaign, a help desk and many more.

… you don’t have a fixed app concept - one of the most important advantages of building your application with Ruby on Rails vs Laravel is that you don’t need to have everything sorted out from the very beginning. Instead, you can add more features as the development goes. It’s one of the reasons Rails is so popular among SMEs owners.

… you need a MVP right away, to validate your app idea - another crucial advantage of Ruby on Rails vs Laravel - it’s awesome for prototyping. Bare-bones features and usabilities can be developed in an extremely short time. Creating an MVP will show you what your users want and what your focus should be.

… you are creating another Twitter or Facebook with millions of calls per minute - Laravel can handle way more requests per sec than Rails. And it’s generally more efficient in concurrency. The question is, will your project ever be so overwhelmed that choosing the right framework will have a significant impact here?

We've decided to ask our programmers, what are their opinions about those two competing frameworks. You can see their answers below! 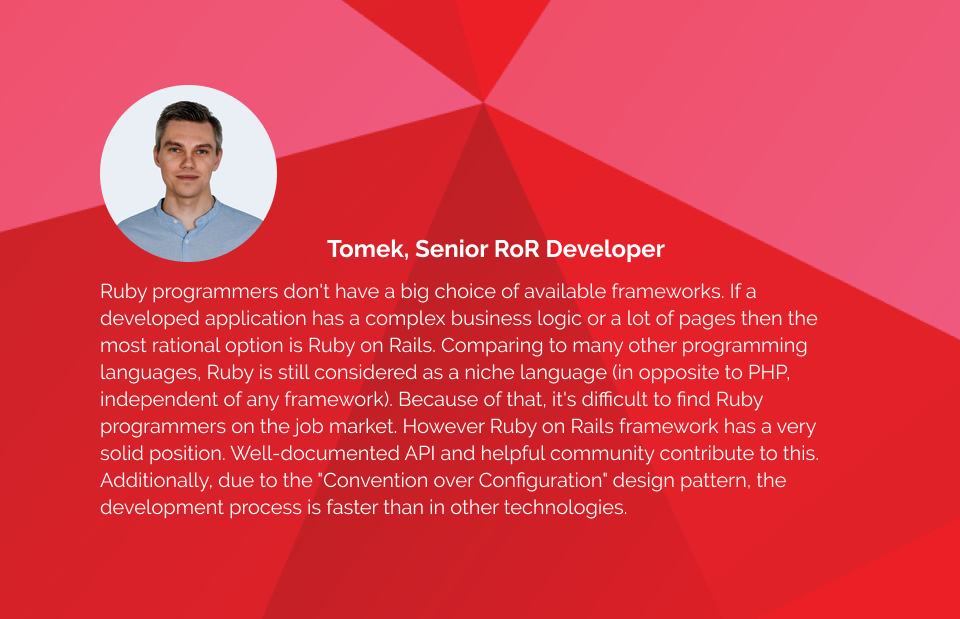 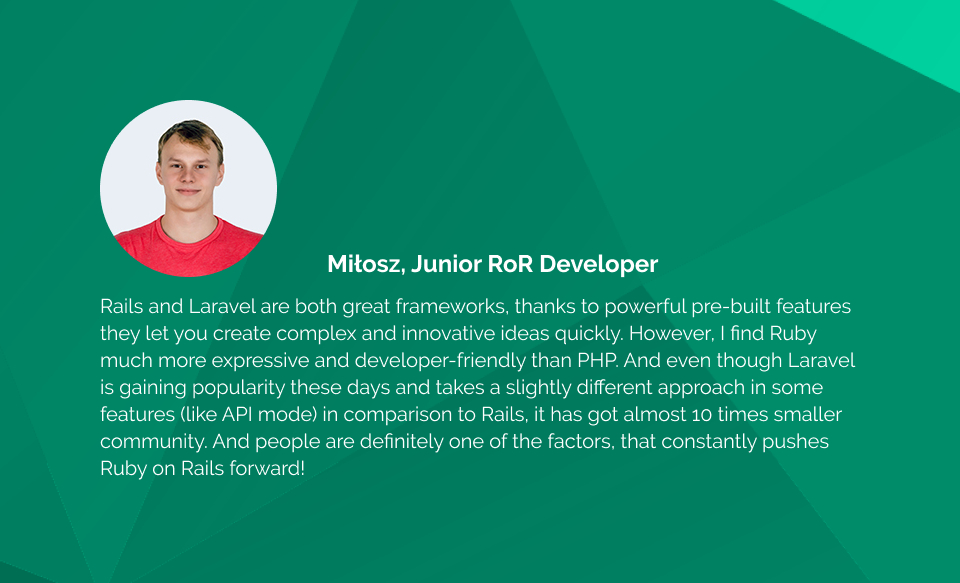 To summarize, there is no better or worse framework when it comes to app development. Truth be told, a much more important matter is the specific development team that you’ll decide on.

An experienced developer is able to do real magic even in a very demanding environment, in opposite to the beginner, who will flop the minute the first obstacles appear.

And the team consisting of those experienced developers, project managers and UX designers - will help you to choose the right technology stack during the Discovery Phase of your project.

So if you are thinking about making your own custom software and consider things like whether you should develop it in Ruby on Rails vs Laravel - just stop.

And ask yourself a completely different question: who would be better at determining, which framework is better in my specific case - me, people from the Internet or a software partner, who developed hundreds of apps within the past few years? I will leave the answer to you.