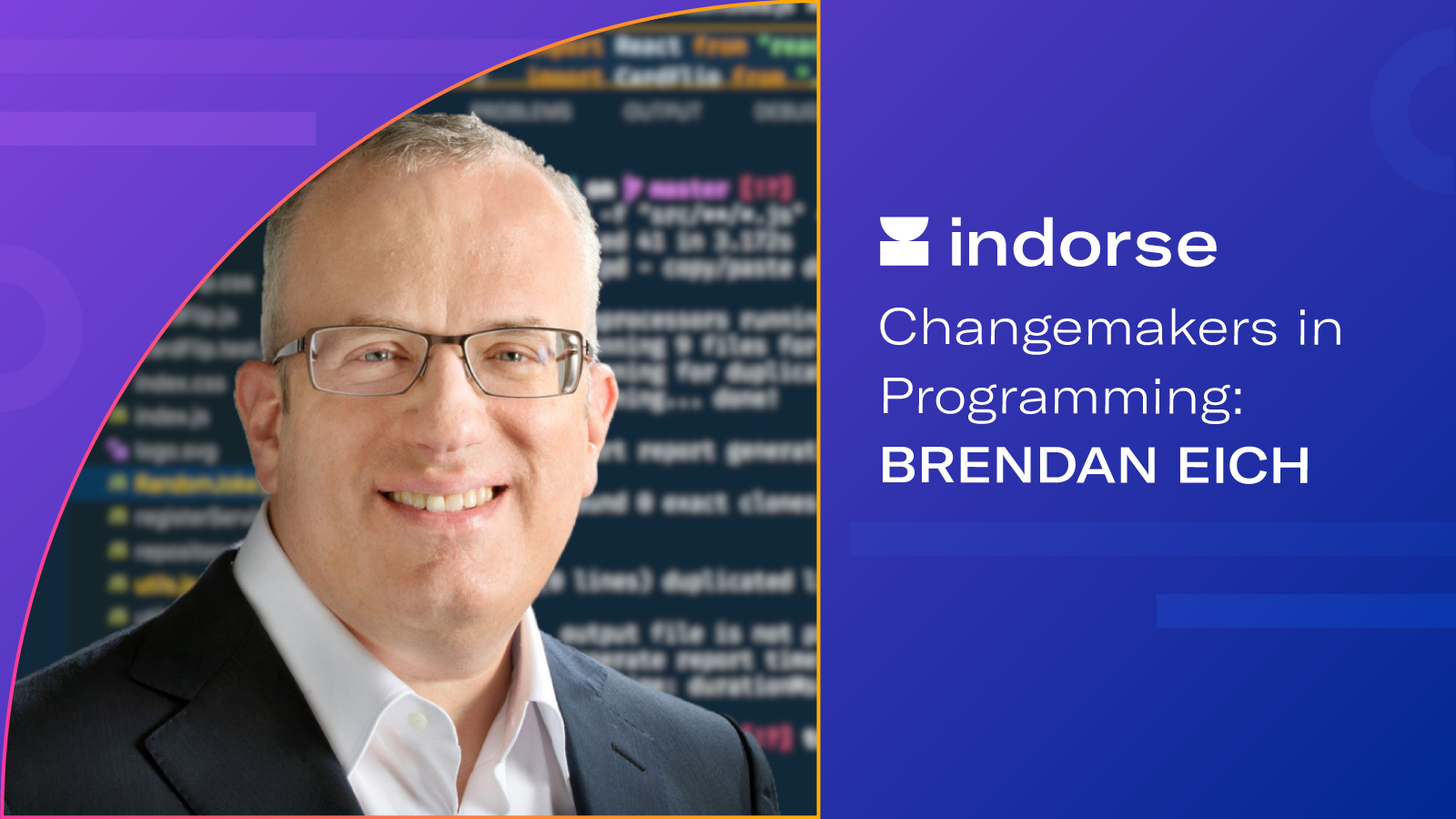 Changemakers in Programming: this new blog series will be focusing on organizations, associations and people who have had and/or continue to have a positive impact on the tech world and the world of programming!

For this second post, we will learn about the inventor of JavaScript. This is the story of BrendanEich, a programmer with a long and growing list of accomplishments!

Currently, Eich is the CEO of Brave, which has developed a new internet browser (called Brave) that promises its users more privacy, better security, and faster browsing speeds. But you may also know him as the creator of JavaScript and co-founder of Mozilla (where he was also CTO and briefly CEO).

In this blog post, we’ll explore how Eich got to where he is today and discuss his latest project (Brave) and how it might change the way we experience the web.

Brendan Eich grew up in Palo Alto and went to Santa Clara University for a bachelor’s in math and computer science. After that, he went on to receive a master’s degree in 1985 from the University of Illinois at Urbana-Champaign.

He started his programming career writing operating systems and network code at a now defunct company called Silicon Graphics, a high-performance computing manufacturer. After seven years at Silicon Graphics he moved on to MicroUnity Systems Engineering to write microkernel and DSP code. MicroUnity was an early developer of broadband microprocessor technologies and still exists.

The Netscape and JavaScript Era

Eich was soon after hired at Netscape Communications Corporation in April 1995 to perform a Herculean task: he had to create a working prototype of a programming language for the Netscape web browser; and he had just 10 days to do it.

If that sounds insane, consider the stakes: the pace of innovation in the mid-90s was intense. Microsoft had just released Windows 95, which included an integrated Internet Explorer that posed a serious threat to Netscape.

Netscape had a slightly different vision for their browser. They considered the web browser as a new form of distributed OS instead of a single application. The problem was that HTML was insufficient for the functionality they envisioned, so they needed a new language and they needed it fast.

Java seemed like the obvious choice for integration with Netscape, but they wanted a more lightweight language that would be approachable for non-professionals. Eich recounted the situation in a 2012 interview:

“If I had done classes in JavaScript back in May 1995, I would have been told that it was too much like Java or that JavaScript was competing with Java … I was under marketing orders to make it look like Java but not make it too big for its britches … [it] needed to be a silly little brother language.”

Eich already had a history of creating programming languages. When he was just a student, he built new languages to experiment with syntax. And at Silicon Graphics, he made new languages that were used to build extensions for network monitoring tools. It turns out he was the right person for the job, because JavaScript is now the most widely used programming language in the world.

His success with JavaScript came down to the fact that it was a simplified object model and combined some of the best features of Java, C, SmallTalk, and LISP. But not only that, JavaScript turned out to be adaptable. According to Eich:

“[…] JavaScript had enough good stuff at the beginning to survive. If you think back to the 1990s, JavaScript was cursed because it was mainly used for annoyances like little scrolling messages in the status bar at the bottom of your browser or flashing images. With JavaScript getting some evolutionary improvements [during the late 1990s] through the [ECMA] standards process, it became fast enough and good enough in 2004 and 2005 to beget the Web 2.0 revolution.” (Source: IEEE)

In 1998, Eich co-founded the Mozilla project with Jamie Zawinski to manage open-source contributions to the Netscape source code.

Things didn’t exactly go as planned, however: AOL bought Netscape in 1999 and soon after (2003) shuttered the Netscape browser. In response, Eich helped to spin out the Mozilla Foundation as an independent entity.

In 2005, Eich took on the role of CTO of the Mozilla Corporation, the for-profit arm of the Mozilla Foundation. He was subsequently promoted to CEO in 2014, but his tenure was brief.

Building Brave: A new way to browse the web

Eich is currently the CEO of Brave, which created the open-source Brave web browser.

Brave is unique in several ways. It’s designed to block ads and trackers to protect users’ data and boost browsing speeds (up to 8x faster than Chrome). However, its most novel feature is the micropayments system that allows users to earn rewards for viewing content and share those rewards with content creators. Brave even has its own currency: a blockchain-based token called the Basic Attention Token (BAT).

The BAT token was launched via a record-breaking initial coin offering (ICO) on May 31st, 2017. The company raised $35 million by selling out 1.5 billion BAT tokens in just 30 seconds — the fastest ICO on record.

Brave users can connect their BAT wallet to their browser and get paid for viewing ads promoted by advertisers on the internal Brave network. Alternatively, users can choose to use Brave ad-free and enjoy a more seamless browsing experience.

This innovative revenue sharing model could completely change the way we experience the web. Today, advertisers pay Google or Facebook to reach consumers, and Google and Facebook use consumer data to serve ads to the right audience. But with the model introduced by Brave and BAT, users retain control of their data (and attention) and get paid should they choose to share it with advertisers.

Imagine browsing without having to see annoying ads. Imagine if advertisers actually paid you (not only Facebook or Google) for the time you spend watching their ads. Both of these options are now possible with Brave.

Finally, you might be interested in the following short video clip, which features Eich talking about why he feels like Dr. Frankenstein (and JavaScript is his monster), and why he keeps working on browsers (first Netscape, then Firefox, and now Brave).

Hey, While You’re Here … Feel like testing your programming skills?

Consider submitting your code repo on Indorse for a crowdsourced code review! You can simply connect your GitHub repository to Indorse, or complete one of our coding assignments, and have your code reviewed by a panel of expert developers spread across the globe — all for free. 💃🕺

Related Stories
Subject Matter
Book a Demo. Ship Fast. Rest Easy. LaunchDarkly. by @LaunchDarkly
#promoted
Step-by-Step Guide on How to Work with the Velo Code Panel by @velo
#software-development
Building Blocks of DOM Manipulation - Vanilla JS Tutorial (Part One) by @shinetechnicallywrites
#javascript
Lack of understanding paves way for speculative behavior in crypto markets - Jordan, QTUM Co-Founder by @shahmeer
#founder-interview
How to Implement Glassmorphism via HTML and CSS by @zoltanszogyenyi
#glassmorphism
Why These Four Developer Debates Are A Waste Of Time by @zachflower
#best-practices