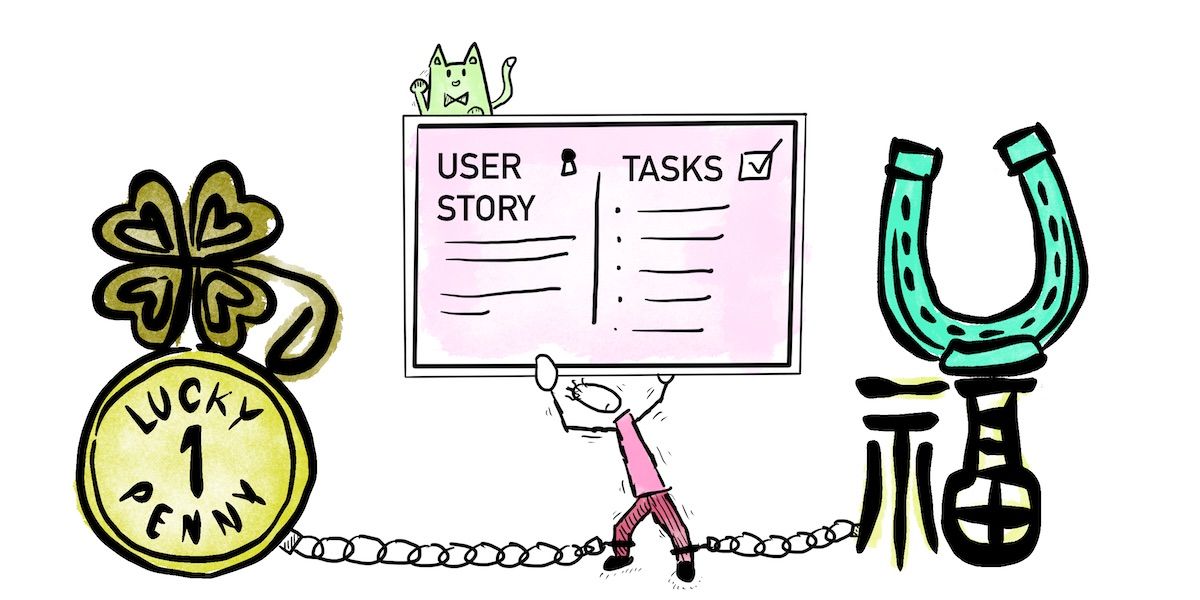 Is 10x product success merely arbitrary luck or based on merit? It’s a question that can torture even the most rational-minded product managers. But which should you focus on when victory is on the line?

“Did you ever observe to whom the accidents happen? Chance favours the prepared mind.“ — Louis Pasteur

It’s the dream of most product managers to have helped create something which solves a valuable problem which resonates with a majority of users. So much so we have set up an entire industry of books, seminars and gurus to help teach us tricks of the trade and boost our chances of product success. But how useful is all that if it turns out real 10X product success may be due to arbitrary luck? It’s enough to put a product manager in a state of existential crisis.

I have been surprised to learn that the role of quantitive luck and success may be more correlated than I previously appreciated. If true, the lessons learned have application not just within a product, but also on a societal level.

In this post, I’m going to explore the quantification of luck, its correlation with success and how best to incorporate luck into strategic thinking.

When should we call something ‘luck’ or ‘skill’?

An excellent place to start trying to define what we mean by a luck event. There is a three-point definition of luck from business manager Jim Collins I feel captures it quite well:

To try and understand how this definition of luck can be applied to an event as opposed to say skill, let’s consider the story of two mountain climbers Donini and Daly.

In 1999 Donini and Daly were ascending a mountain. As they approached the summit, Daly took out his ice axe and started climbing a near-vertical wall. Halfway up, he lost his footing. His ice screws failed, and he fell, breaking his leg and leaving him dangling from two cords of rope. His climbing partner (Donini) took action and lowered him down, secured him in a sleeping bag and anchored Daly to a wall. Donini, seeing no other option, attempts to descend the mountain and find help. At that moment a rescue helicopter appears, spots the pair and proceeds to evacuate them just before a storm starts to appear. The person piloting the helicopter? By chance, it turned out to be a good friend of the pair.

So, how much of their escape was thanks to luck and how much was skill? On the surface, there appears to be a lot of lucky events. But look a little closer. Think about all the training and practice these two would have endured preparing their bodies for such a climb. All the literature they read, the planning made and the selection of a suitable climbing partner. Much of this would have helped the pair be physically, mentally and psychologically prepared for such an event as the one described. The fear of failure would have encouraged them to study what actions to take should the worst happen.

The biggest luck event in the story appears to be the friend piloting the helicopter. But even then, one could argue that their friendship may have increased the likelihood of that friend being there at the right time and place? Yes, they were lucky, but they were only able to take advantage of that luck because of the skill, training and productive paranoia the pair used in their preparation. In other words, their fates were less left to chance.

Quantification of luck on success 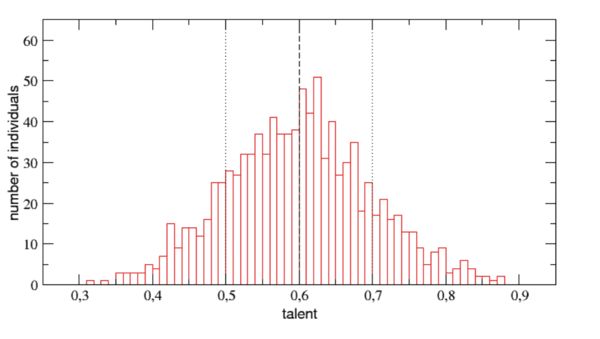 The 2018 paper ‘Talent vs Luck: the role of randomness in success and failure’ is one of the few academic examples which attempts to model the correlation of luck, skill with financial success across a general population (individuals are known as ‘agents’). 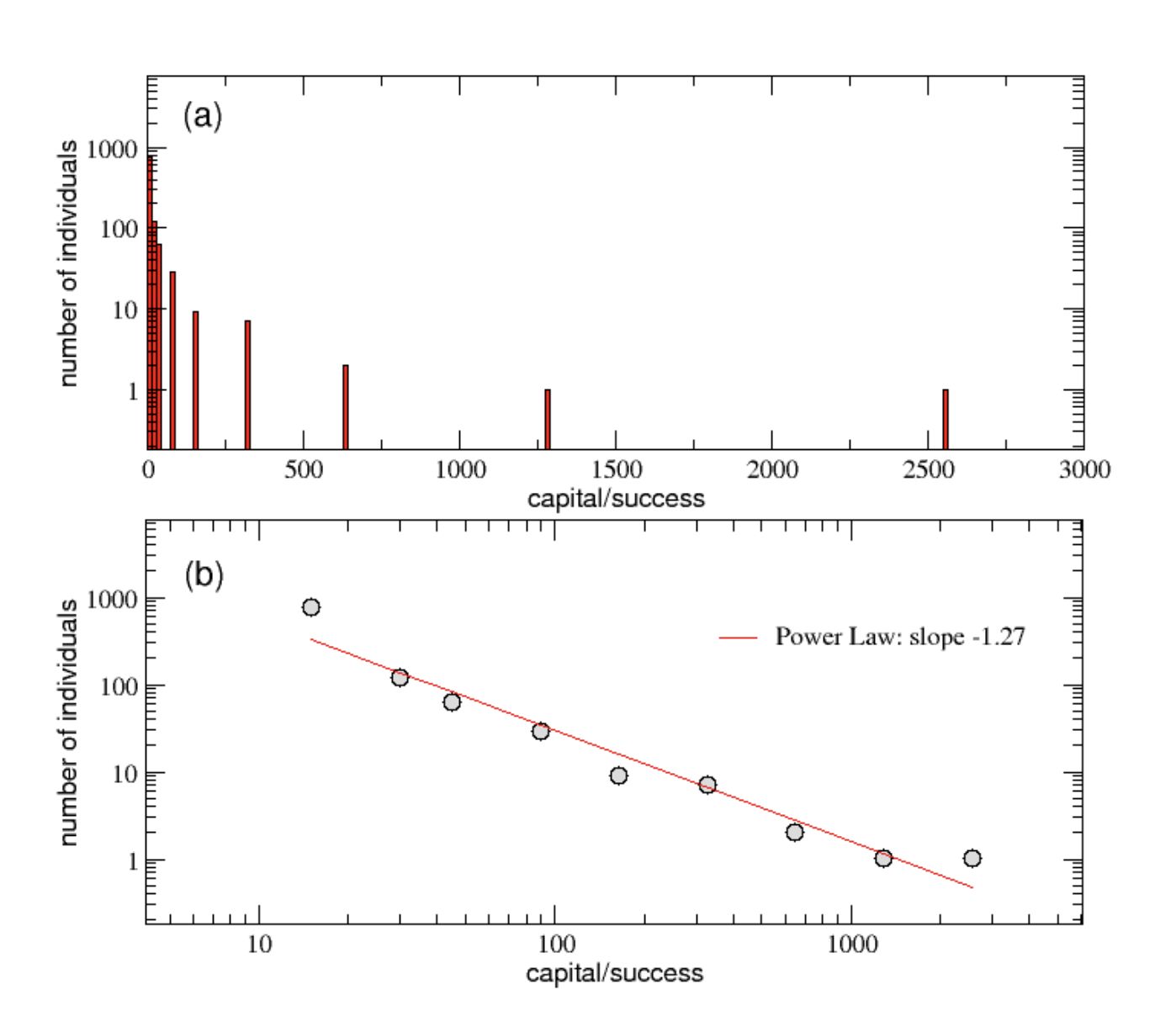 Talent in this modelled population was normally distributed, but, luck was not. When the simulation completed, they found 20% of the most successful agents disproportionally had 44% of the luck events. 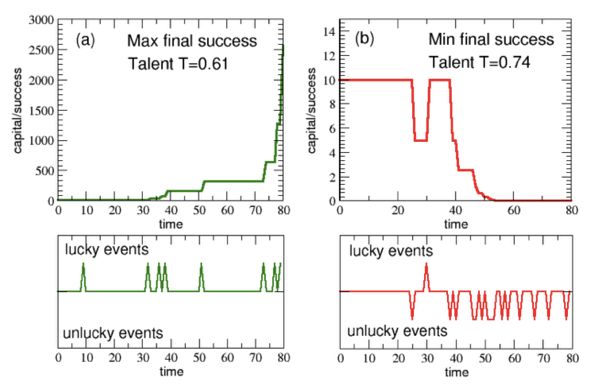 Interestingly, the most successful agents turned out to be just average in talent. The most talented agents were rarely the most successful, and that’s despite the fact they were better at exploiting luck. It seems even a great talent becomes useless against the fury of misfortune.

Bear in mind that models like this tend to be over-simplistic. They don’t take into consideration all the complexities of the world (like privilege and nepotism). But if good luck events are so important, then, from a product/personal perspective, is it a good use of our time to build a strategy around increasing luck?

If luck is quantifiable, then perhaps the ability to create success is reproducible. The study concludes that to increase our access to luck events, we should be willing to overcome biases and find ways to invest in a range of ideas and people. Like Anton Ego says, “Not everyone can become a great artist, but a great artist can come from anywhere”.

Would Bill Gates have been successful no matter what?

In the model, each luck event an agent experienced assumed two things:

This nicely ties in with a concept Jim Collins described called ‘Return on Luck’.

Return on luck assumes that the environment does not determine your success. Instead, the individual does. To take advantage of both good and bad luck, you need a combination of creativity, strategic thinking, productive paranoia and discipline. One of the examples Jim uses is the case study of Bill Gates.

The question asked is, would Bill Gates have been successful no matter where and when he was born? At first glance, Bill Gates appears very lucky. He (Bill) was born at the right time in history, in the right country to upper-middle-class parents and exposed to computers from an early age. He studied maths and programming, got into Harvard, had the right network of friends, happened to read the right computer journal at the right time and then started a successful company.

Compared with many of us we probably didn’t have many of these specific privileges growing up. Still, the point is that Bill was not the only person who had all those ‘luck’ events, so why didn’t we see more people seize on the same opportunities that he and his co-founder Paul Allen did?

The difference is explained by Bill’s ability to recognise a life-changing luck event, and being prepared to do dramatic things like drop out of college and throw himself entirely into the opportunity. In other words, he did more with his luck. But there is something else I think most people have overlooked. If Bill Gates had not developed the skills and insights he had at the right time, it seems unlikely he would have been prepared to seize on these specific luck events at all.

It’s curious. Skill and luck may have little correlation in determining success, but our ability to identify and exploit luck events is. If you are currently not acting on the luck event, then perhaps our goal should be preparing our expertise and knowledge for the next luck event.

Luck is not a strategy, but the return on luck is

So if luck is not a strategy, what is? Be it good or bad luck, we need to manage the odds of luck with a plan. The following principles, I believe, are a good starting point:

Somewhere between skill, luck, and opportunity, there appears to be a sweet spot determining success.

Expertise and knowledge can help improve our chances of picking situations where we are more likely to encounter a luck event. Still, we also need to be ready to identify and seize upon those opportunities. If you are competent at theorising current trends and skilled at identifying valuable problems, you already have a head start.

Statistically, because of the role luck can play on success, it works out better to check biases and aim to distribute resources more randomly that you might have initially considered.

Many people, despite a good education and a strong work ethic, may never get the luck events they need for success. This can be due to a range of issues including location, socioeconomic status, prejudices, race, patriarchy and generally any form of privilege.

If we genuinely want the inequities of life to be based on skill and effort, then we need to not ask people to own the bad or good circumstances they are born into. Should you have the opportunity to invest in people, be wary that statistically, there is a wealth of untapped opportunity just sitting out there in the general population. Look to improve the social and economic inequalities that limit access to luck events, and you will be rewarded.

For a more product-specific example, sometimes it can be very tempting to go all-in on a big problem. But if you can instead try to validate multiple ideas with smaller experiments, your chance of stumbling upon a luck event increases exponentially. Fire bullets, adjust and then shoot the cannonball.

So don’t worry about luck dictating the successes in your life, instead learn to embrace the chaos of luck and prepare yourself for the day it comes.

“Diligence is the mother of good luck.“ — Benjamin Franklin

Related Stories
Subject Matter
Book a Demo. Ship Fast. Rest Easy. LaunchDarkly. by @LaunchDarkly
#promoted
What Sociologists Are Saying About 2020's Myriad Political Movements by @raudaschl
#society
Building the Network for the WFH Future by @brianwallace
#remote-work
Introduction to AWS Log Insights as CloudWatch Metrics by @thedigicat
#aws-lambda
$Fil Mooned Right After I Sold It. Am I Weak Hands? by @digifinex
#filecoin
Interchain Transaction Bridge - The Missing Key to Creating Seamless UX in a Multi-chain Universe by @weitingchentw
#bitcoin
Top Books About AI You Should Read in 2021 by @Nikhil
#artificial-intelligence