Blockchain’s first major use case is as the stock market 2.0

Showcasing the best and worst of cryptocurrency!

Most new blockchain tokens fail to adequately justify their existence. We’ve seen blockchain shoehorned into almost every type of business — from online marketplaces, to dating websites, to discount cards. The blockchain ecosystem is beginning to sound like a particularly bad startup pitch competition.

It seems like common knowledge that the vast majority of companies are not leading the cryptocurrency disruptive charge, but capitalizing on it.

In his article ‘Ten years in, nobody has come up with a use for blockchain’, Kai Stinchcombe argues:

After years of tireless effort and billions of dollars invested, nobody has actually come up with a use for the blockchain — besides currency speculation and illegal transactions.

The blockchain is fundamentally changing the way people invest in companies. We could very well be looking at the next incarnation of the stock market.

Is this a pipe dream or the not so distant future?

Disrupting the stock market is an ambitious but not unheard of goal. Eric Reis, startup legend and writer of The Lean Startup, plans to disrupt the stock market with his latest venture. His leap into this space has backing by major players such as Marc Andreesen and Tim O’Reilly. This lends weight to the idea that stock markets are not immune to new challengers.

But could the cryptocurrency market be one of these challengers? It is clear that for many people crypto trading fulfills the same niche as investing in stocks.

A common colloquialism is that disruptors in a space need to be 10x better than existing alternatives to succeed. What advantages does a stock market based on cryptocurrency tokens have?

Investing directly in stocks outside of your home country is a painstaking and high-friction process.

Countries may impose limits in how much can be invested in a foreign exchange. There may be extra taxes that are applied to foreign investments. Getting access to a foreign stock market in the first place can include a string of middle men and brokers. And the entire process has to be navigated independently for each country.

Even if you successfully figure out how to invest in your favorite company in Italy, expect to face an entirely different process for investing in the Malaysian market.

In contrast, investing in companies through ICOs or cryptocurrency exchanges is effortlessly global. Portfolios easily boast coins with foundations or companies all over the world from Singapore (Qtum, Tron) to the Argentina (Decentraland).

ICObench, a company that lists and rates initial coin offerings, showcases listings from 70 different countries. Investors are no longer restricted by lines on a map.

The same lack of regulation that allows investors to participate globally also confers other benefits. In many countries laws and regulations prevent all but the very rich from investing in early stage companies.

In North America to be allowed to participate in company prior to their listing on the stock exchange you need to become an accredited investor. This means proving you have a net worth greater than one million dollars (excluding your home) and an annual income greater than 200,000 dollars. In the United States of America this is only 1.2% of the population.

And just being an accredited investor is not enough to get you to the table. The most promising startups have investors competing to participate in their rounds. Anyone who can’t throw down millions in capital isn’t welcome.

In the cryptocurrency market there are no such restrictions on early investors. If you have $50 and access to a computer you can invest in an early stage company. For the first time investors who can just afford to spend $500 or $1000 can attempt to pick out the next facebook or google.

This has its own problems — investing regulations were put in place to protect consumers from risks and scams, but for many investors the exclusionary regulations seem outdated and overbearing.

Another regulation sidestepped by the cryptocurrency market is the baffling restriction placed on day traders in some countries. In the United States, day traders who have less than $25,000 in their account will have their accounts frozen if they make more than 4 trades a week.

This rule was put in place as a protectionary measure. $25,000 is the supposed magic number that deliminates sophisticated investors from amateurs. These rules seem unfair to many who feel they should have the same right to participate in trading regardless of their account balances.

What are the largest disadvantages?

Despite holding some advantages over traditional stock markets, the cryptocurrency market is not on a path to victory just yet. There are major obstacles it faces before it supplants the existing infrastructure.

One of its key advantages — lack of regulation, is also one of its key disadvantages. Wild fluctuations, scams, trade spoofing, and insider trading are all unfortunate realities of an unregulated marketplace.

Assuming we move to decentralized exchanges (and companies like Kyber Network and Loopring are working to make this a reality) it will be increasingly difficult for governments to regulate the trading of cryptocurrency.

Assuming we can overcome these obstacles — how can we validate this prediction?

If the crypto market is really the next iteration for the stock market what can we expect to see in one, two and five years?

Banking heavyweight Morgan Stanley estimated that 2 billion dollars were poured into crypto from hedge funds over the last year.

TraderView, a social community and tools for stock traders, has listed many major cryptocurrency pairs on its site.

And Robinhood, an app that has brought stock trading to a new generation of investors, announced plans to start offering ethereum and bitcoin on its platform.

Overstock followed suit in December raising 100 million dollars for its OSTK token. Their token is a security and registered with the United States Securities and Exchange Commission.

Kodak, a household name in cameras and photography, announced it’s plans to hold an ICO.

Where we need to go next.

If trends in this industry hold true we should expect to see more public companies follow suit in the upcoming years. This could be aided by clearer laws on what is and is not classed as a security — and more countries like Singapore, Estonia, and Gibraltar welcoming companies who seek to hold ICOs.

Moving from stocks to tokens will be encouraged by the large number of young investors (the primary demographic involved with trading cryptocurrencies) that choose cryptocurrency markets over traditional stock markets. Over time it will become common practice to launch securities on the blockchain.

A vision of the future

It’s 2025. The cryptocurrency market is the largest investment market in the world. General motors has a GM token, Apple has an AppleCoin, and Google has a token called XYZ. Early stage companies face unprecedented access to seed funding, spawning a new burst of innovation and technology. The majority of new investors trade in cryptocurrency and nothing else. Stock markets around the world have begun to slide into obscurity.

Is this a moonshot speculation? Maybe. The stock market is a large and ancient institution. But disruption of the financial sector has long been a rallying cry of blockchain enthusiasts. Until recently we’ve been focussed on currency and banking. Maybe it’s time we look at stocks and investment?

The market has rallied behind the idea of investing in commodities and shares through blockchain tokens. We’ll watch eagerly to see if this trend keeps up in 2018.

Enjoy this article? We have a Telegram Signal group now!

We post simple and effective trading signals. So you can spend less time doing technical analysis and more time getting results.
👉 https://t.me/coinandcrypto

How to Profit from a Trailing Stop Loss on Binance 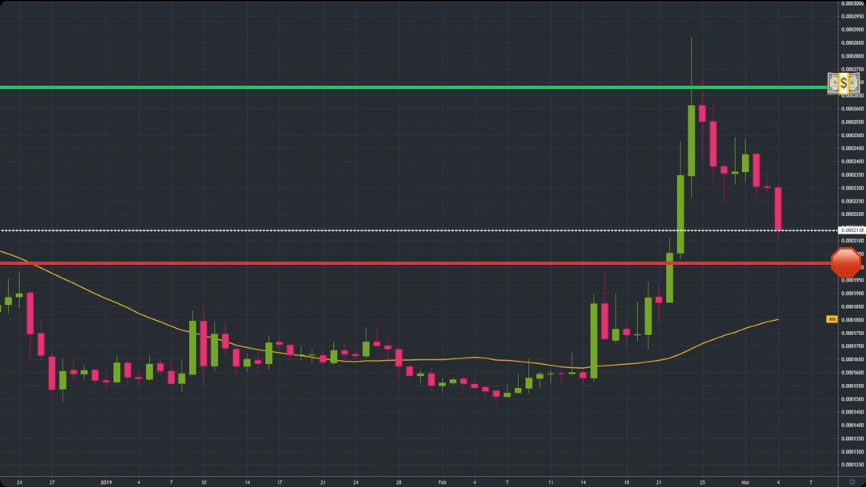