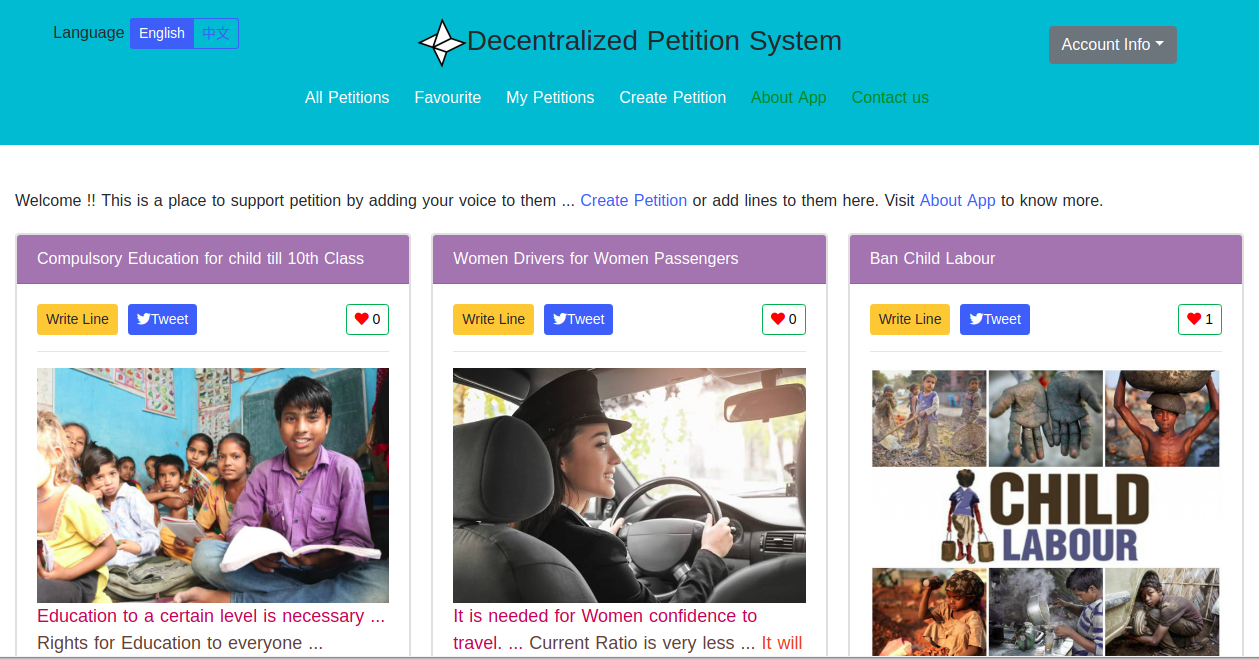 Sourcing of ideas, information from masses to solve a problem is very effective. One such interesting area where it can be utilized is the online Petition System.

In simple words, a petition is a formal statement signed by many people, appealing an authority in respect of a particular cause.

If any of the above things happen, then what was made for highlighting/solving people problem, could actually become a curse for them.

As it is such a big thing, data of petition signers matters a lot, it needs to be secured, it needs to be decentralized, and hence it needs to be on the BlockChain. This data will help us in getting the correct numbers, sentiments of the people, which can then be utilized by the authorities in the ethical way to address those issues.

Decentralized Petition System is one such opensource project targetted to solve such problem. It is built over Nebulas Block Chain, a public blockchain ensuring the integrity and safety of the data.

In the coming lines, I will explain the tech architecture of the platform and the progress made so far:

When a user hits the url of the DApp which is served from AWS S3(SPA Hosting) via Cloud Front. Loaded DApp in Browser communicates with the Smart Contract on Nebulas BlockChain via Nebulas Web Extension Wallet and uses NebPay Sdk for it. Less important data can be obtained using AWS Lambda & API Gateway from AWS Cloud.

Write process across all the Nodes of Nebulas takes some time, so Nebulas Server is used to keep the transaction details, which are later used to retrieve info regarding the status of transactions.

Code level in-depth overview can be found in this post. The architecture explained here is almost similar to what discussed here.

Best Architecture Award: The architecture presented above got selected for the best architecture award at the Accenture BlockChain Hackathon organized in Bangalore, India on 25th August, 2018.

As mentioned earlier, the project is opensource, code can be found here. If you have any queries you can reach out to me at thakuria.honey@gmail.com or can connect over Linkedin

Looking forward to get contribution from the opensource community to take this project from working prototype to live stage.