A look at pricing methods of Bitcoin in the context of the Stock to Flow Method and the upcoming halving.

In this paper we take a look at the stock to flow method of pricing Bitcoin ahead of the halving. Although the model may have appeared to have been successful in the past and it has had significant uptake ahead of May’s halving event. The critique is not supposed to be definitive but rather an exploration of the ideas proposed to value Bitcoin and whether they still apply this time around.

Most people in the Bitcoin space have come across the stock to flow method of pricing bitcoin. It is a pricing model from the commodity space commonly used in Gold. With the proposition of Bitcoin being a store of monetary value and a similar market structure to Gold it is naturally suggested as a way of also pricing Bitcoin.

Those of us in markets and trading will be naturally suspicious of propositions that attempt to model a market so simply. Like the efficient market hypothesis, they are great ideas and not useless, but we know that each time we act in a market for ourselves, that we are disqualifying some rule taken for granted in any model.

So, is there an equal and opposite effect to our seemingly spurious decision-making, or can the butterfly wings of our bid or offer cause a reflexive typhoon in the price?

If we take a look at the stock to flow model, we can see that it looks like it has tracked fairly well with price movements on the chart.

Although it is encouraging that the deviances appear to be lower as time goes on it also suggests a retrospective model fit, from 2015 onwards, which takes only one boom/bust event into account. This is the period when the ‘digital gold’ narrative took shape, perhaps showing some post-hoc rationalisation that retrofits the model to reality (also, possibly not).

That historic event took Bitcoin from an asset with a full (21 mil coins) market cap of almost $420 Billion USD to $66 Billion USD as one of the most dramatic pricing corrections in history.

It’s a huge problem that we barely notice this in the stock to flow model. The correction barely deviates from the line.

So what else is going on here?

Another way of looking at the price of Bitcoin has been the Metcalfe Law, a rough concept that says that a network value is the square of its number of users. The idea is that each user benefits from each additional user by creating a larger network and that there is value in this. It is simple, a reasonable idea and great for tech applications, especially in estimating a break-even point of success for a project.

Now guess what? Metcalfers think that THEIR chart perfectly tracks the rise and rise of Bitcoin. 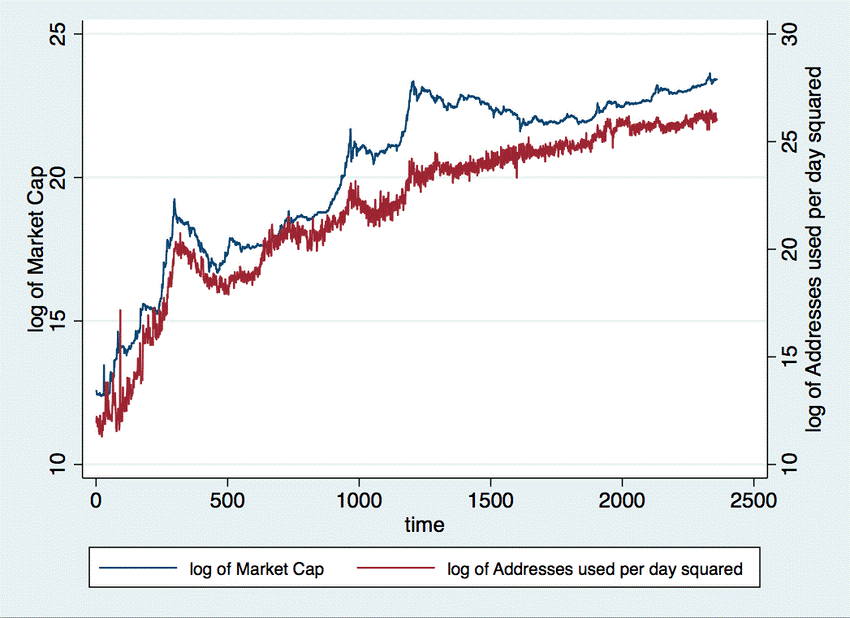 In the chart we can see that the addresses used per day rises, including during price peaks, as if to will the price of Bitcoin higher, yet remain an aggregate figure, smoothing the price, as if a central point of reality.

We wonder if both of these explanations for the price of Bitcoin are taken out of context with the reality of how Bitcoin has become more popular.

Bitcoin was originally a cool and subversive project created by anarcho-capitalist types of the cypherpunk movement. It was incredibly novel when it was used to buy pizza and after the first exchange popped up (which used cost of production to price the coin at the time, a la Satoshi Nakamoto’s own conceptualisation, on the shoulders of Adam Smith) and it was proven for transactions, could now be successfully used for black market transactions. In this completely different use-case to digital gold, transaction-type valuations such as ‘equation of exchange’ turned up during this time, which suited the perception of what it was being used for (currency).

By this stage there had been several boom and bust type events, enough to get the interest of traders, finance guys, markets guys e.t.c. and it was considered as a type of ‘digital gold’ heading into its 2018 boom period.

So guess what? A new pricing model — the stock to flow ratio, also used to model Gold began to be used during this time.

Now a major problem that we propose after the 2018 boom is fairly straightforward. The boom and bust cycle of Bitcoin has progressively pulled new entrants to the market, right up until 2018. After which, trading firms entered the market with massive turnover (does this theoretically discredit the equation of exchange pricing model due to an enormous daily turnover?) as well as trading shops such as Bitmex settling into Bitcoin with significant turnover.

Perhaps even more significant is the situation that Bitcoin miners are in ahead of the halving. With the size of the market increasing according to metcalfe’s law, each price boom drawing more and more players into the market in the past, we cannot say that it is the same scenario again after the worldwide boom of 2018. We cannot rely on a boom to bring new players into the market because the idea, the meme is saturated.

If a new boom does happen, we would need to see more actual dollars come into the market from an existing network in terms of individuals and their network affect (N²).

So would we see a new pricing model that states that N is actually determined by the dollars held by each N of N², and that 100 $1 N’s are the same as 1, $100 N (or similar). Would a metcalfes ratio with purchasing power be considered, post hoc?

In the set of relationships that govern the price, of which all of these models may be factors (including production cost of Bitcoin) there has been pressure on mining in the past, around 2015 just before the major bull-run.

In fact, resolving that tension between Bitcoin Miners and the market price may be the event that occurred right before, and helped to drive the major run-up in price.

So, if we agreed that the stock to flow ratio was without a doubt a pressure on the price that would attempt to limit market supply, but Metcalfe’s law had run its course — that no new network users were possible we would have to ask whether the operations of miners — their ability to act efficiently and competitively between each other — could be the breaking point when the supply squeeze emerges.

Put simply — if the boom and bust cycle had been driving the price higher to avoid putting pressure on miners, but that miners had been under pressure before the last boom, perhaps that 2017/2018 bubble that extrapolated out the network affect to its maximum means that the gains from the booms are over, and that the miners are the incumbent participants who must absorb the shock of reduced supply?

We wonder this because systems have pressures, and the rigid and working parts of a system hold, where the weaker and more vulnerable parts are stressed and adapt or fail. Perhaps this time around, it is mining that is put under the pressure and can’t hold.

So after the halving, does the cost of production come back into play, now that the boom and bust cycle has been taken as far as it can go, will miners be forced to compete over the lower reward with supply going into a network that has exacerbated the Metcalfe effect and with an increased velocity of coins?

NB: After the recent Covid outbreak and the response of the US government in providing massive monetary stimulus, there is a far better chance that the weakness in the system is in fact with higher prices, but the conceptualisation of how the system works (with a potential breaking-point in miners when there are changes in the system) is important and always relevant.

Thomas is a veteran of markets and trading, having traded most instruments through the GFC, European Debt Crises, Japanese Currency Interventions and now the Covid-19 markets. Thomas has been involved with Bitcoin from early on and works with Australia's premier digital asset exchange, Mine Digital.