Bitcoin Bear Market: Is It Over Now? 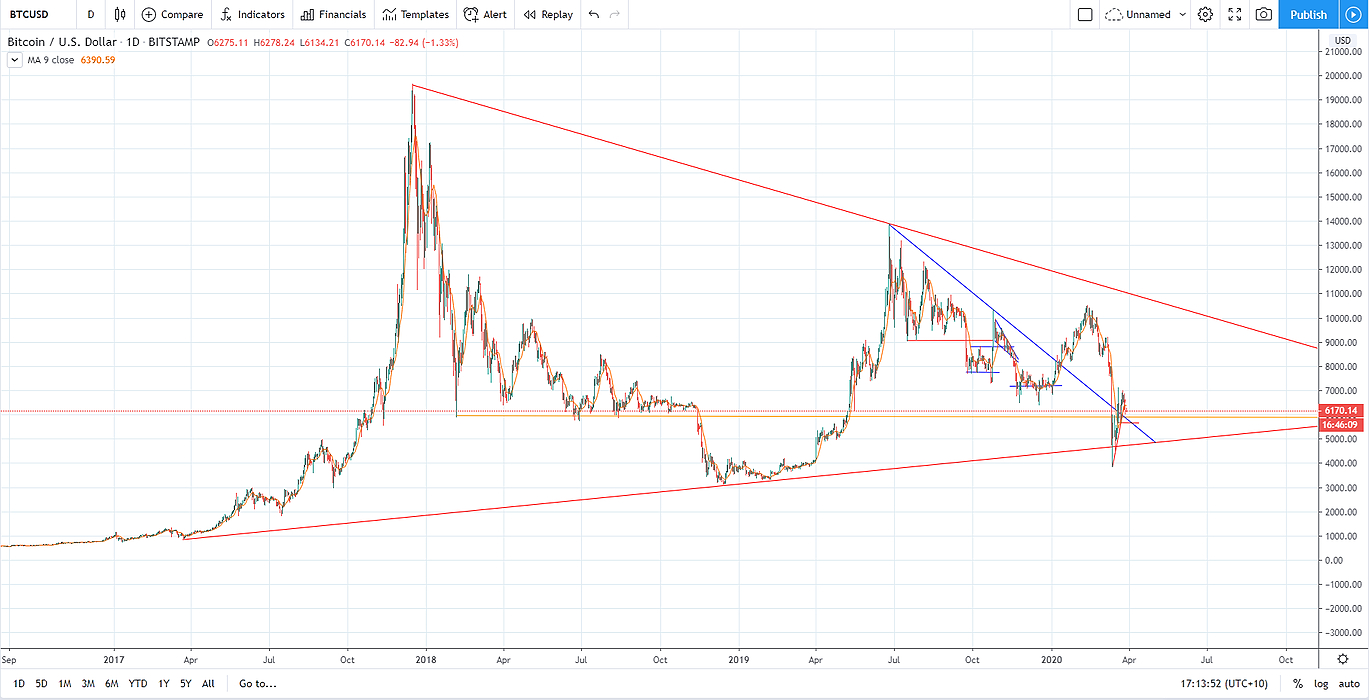 We take a look at Bitcoin from the technical perspective

In this paper we illustrate why we think that Bitcoin has hit its low but that the ghost of the Bear market must return one last time before turning Bullish.

We explain why and how we think this will happen below.

Shown on the chart, we think that the trend-line near the recent low is a floor price of higher lows, currently around $4800 USD. Positive price pressures here include the cost of production, technicals of the market and the nature of the asset and its HODLERS. We would be quite concerned about the asset long-term if it did go lower. 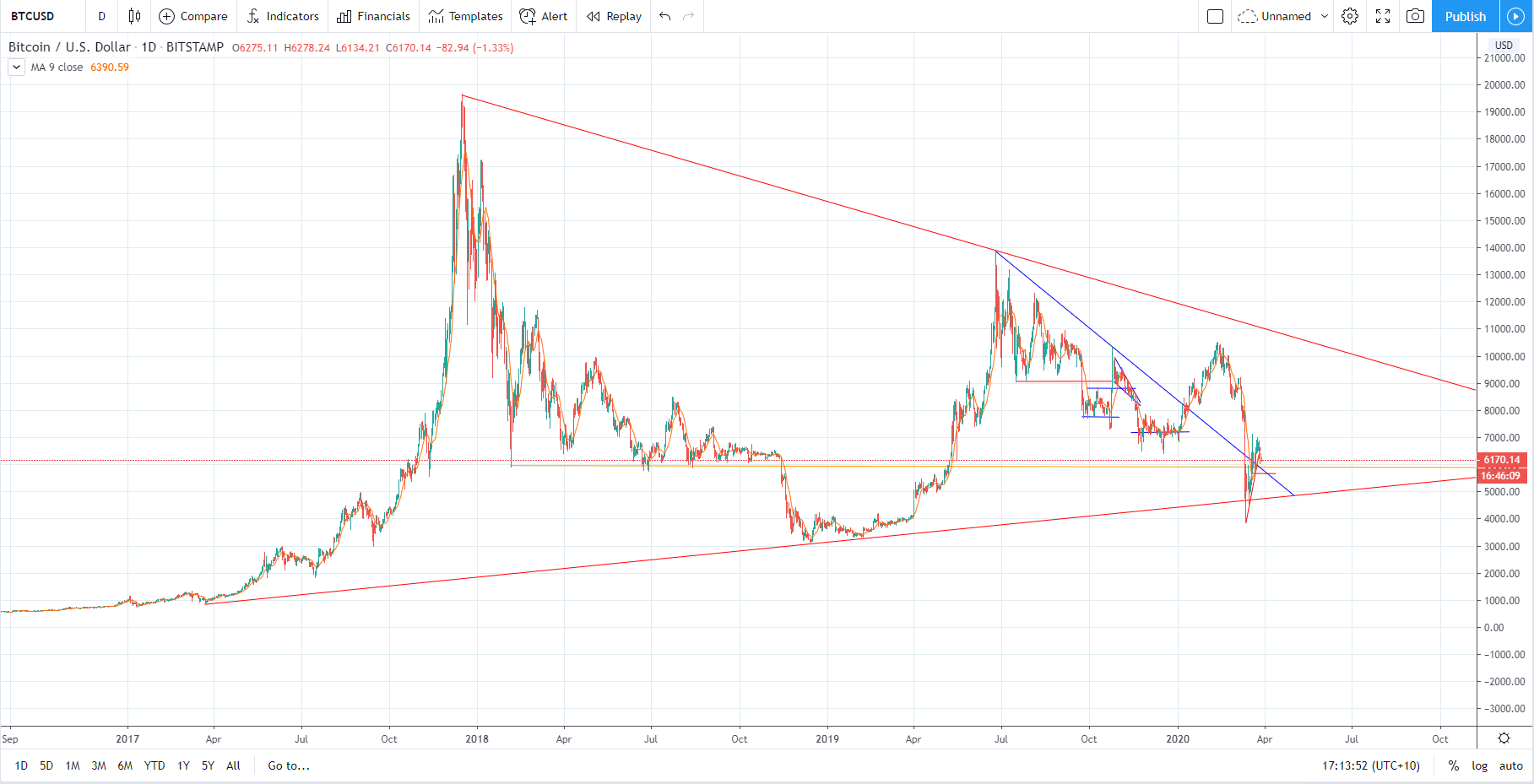 After making its lows we see that the market refused the opportunity to play out the parabolic collapse. Let’s call this a weak bullish indicator of the intention of the market. 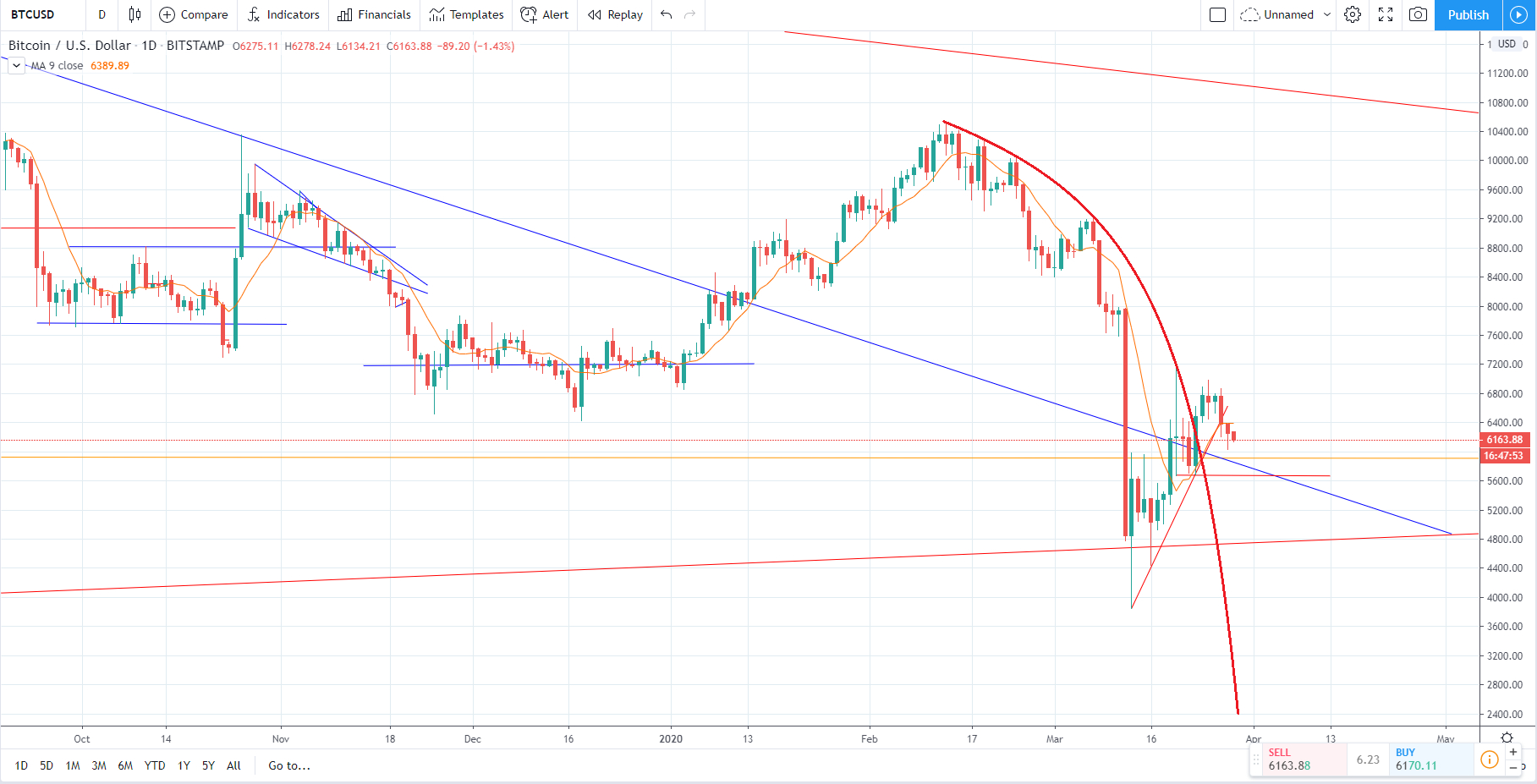 Although we anticipated this as the low of the market we didn’t think that it would turn on a dime, choose a new direction and take off to the moon.

Now that the BTC market is full of professionals it explores its themes and narratives in a more unforgiving and aggressive way for participants. Those without a clear view will pay the high or short the low and the market will generally test positions in a way that it didn’t do before around 2018 (when professionals began to take over).

So although the theme that massive monetary (and fiscal) stimulus would be bullish for Bitcoin (its entire raison d’etre) the asset was up over 50% at $6700 USD. There are also a large number and value of leveraged retail positions that pushed it higher.

In a market of professionals as well as significant retail punters with high leverage it is always most likely that these positions have to be taken out (if they are there) before the market can move— to quote one G. Soros ‘pigs get slaughtered’.

So here at the highs it looks like the market was locked up in a butterfly spread (or similar) to build a short position 6700 to 6800 and rinse the market out one more time to the down-side.

Frankly, it is also a classic move expected in most market turns these days. 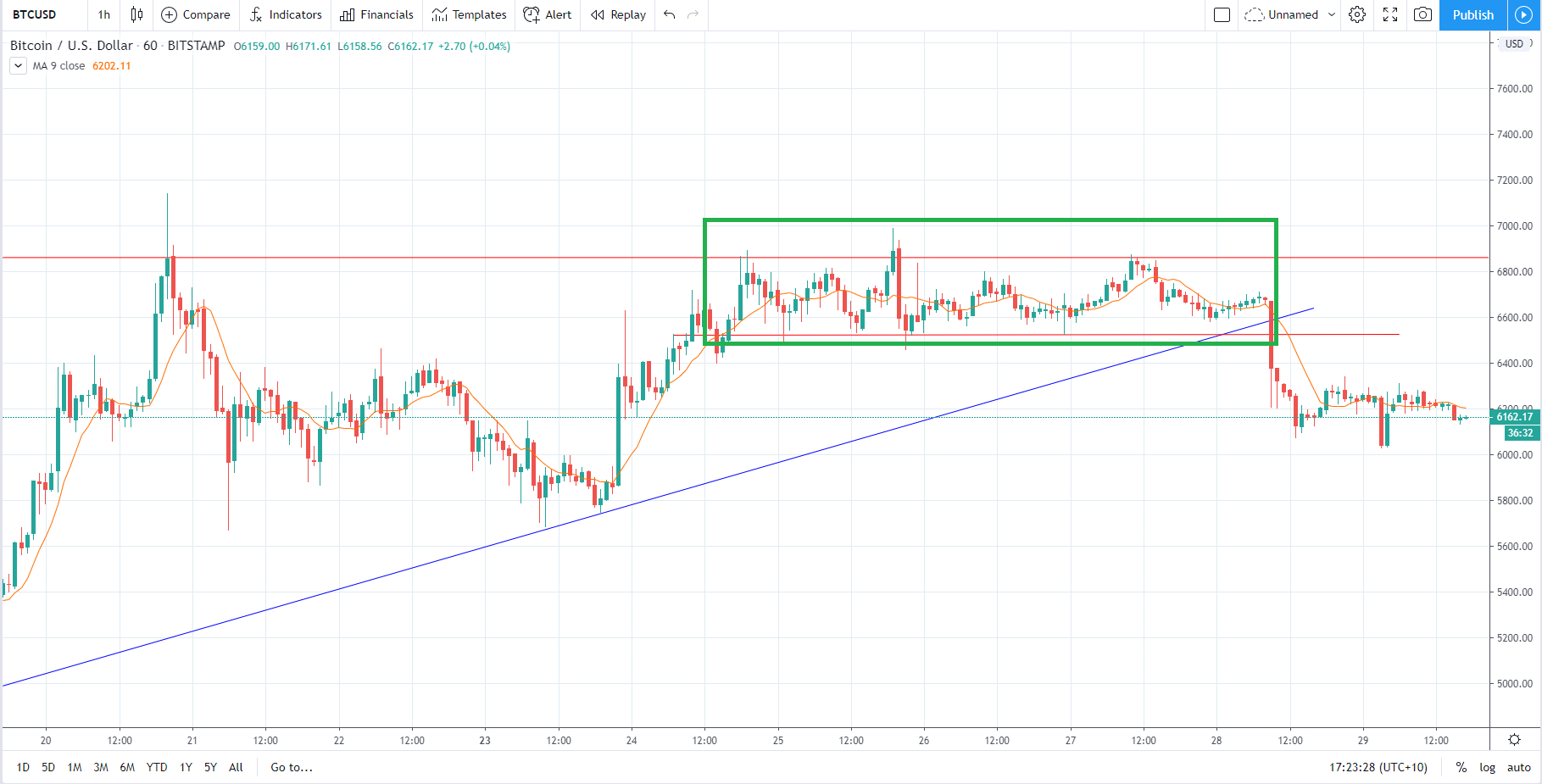 Volumes had dropped off while the asset was locked up. It’s fair to say there was probably a fair amount of dumb money driven by FOMO, hysteria and excitement willing it higher (author bid and covered more than once).

As well as that any market savage worth half their salt would know here that there is a juicy trade pushing longs out into the area coloured in blue. It is one of the few opportunities for a decent-sized fund to get a solid trade completed in the asset.

Because of course, creating cognitive dissonance in longs with their (most likely eventually valid) narrative with the momentum on the short side should allow traders to bully bulls out of positions.

Nothing is better than trading against a rational idea when the market is out of position for that idea to realise itself. 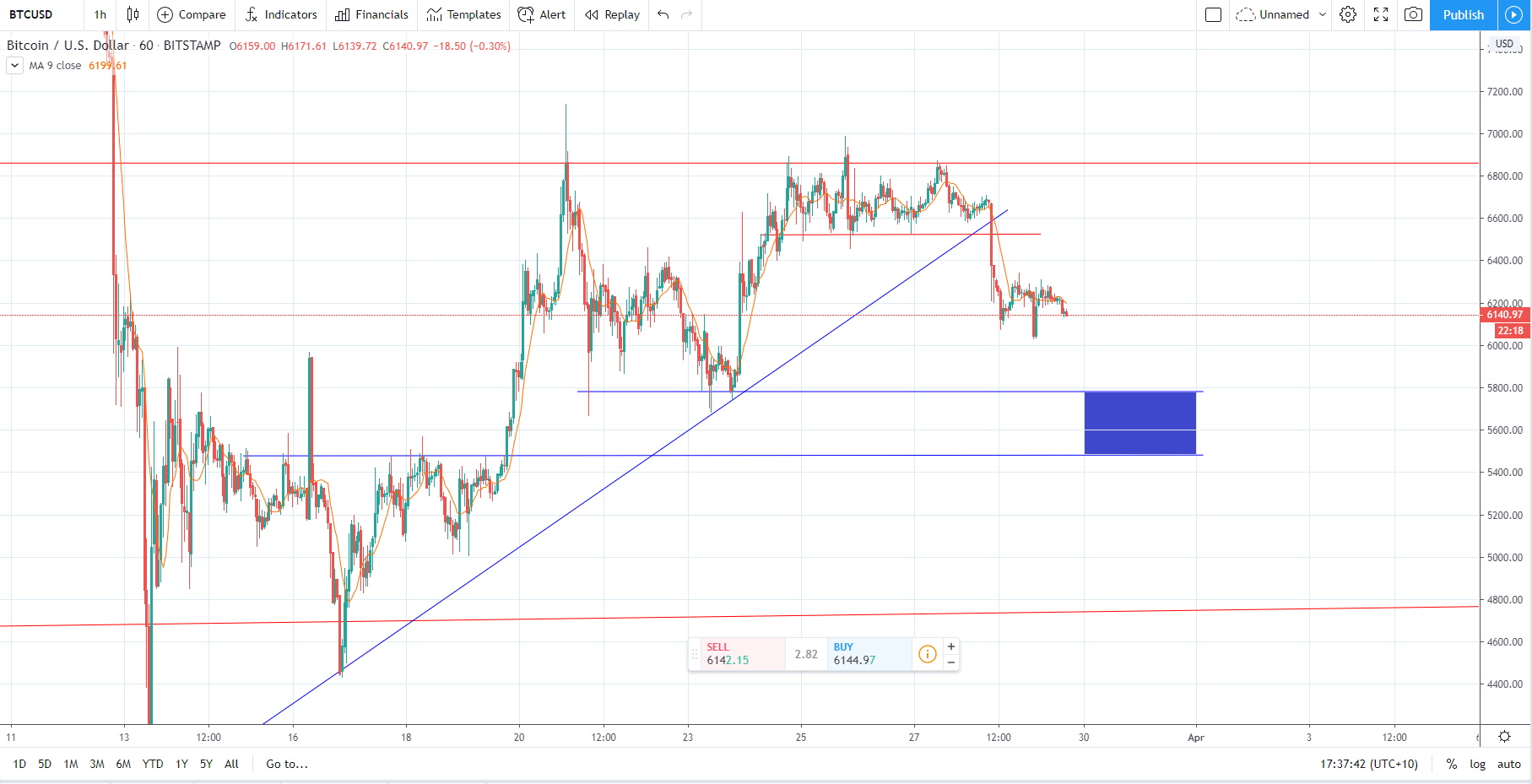 To go back to the very broad view, all of this leads to a bid somewhere in here. 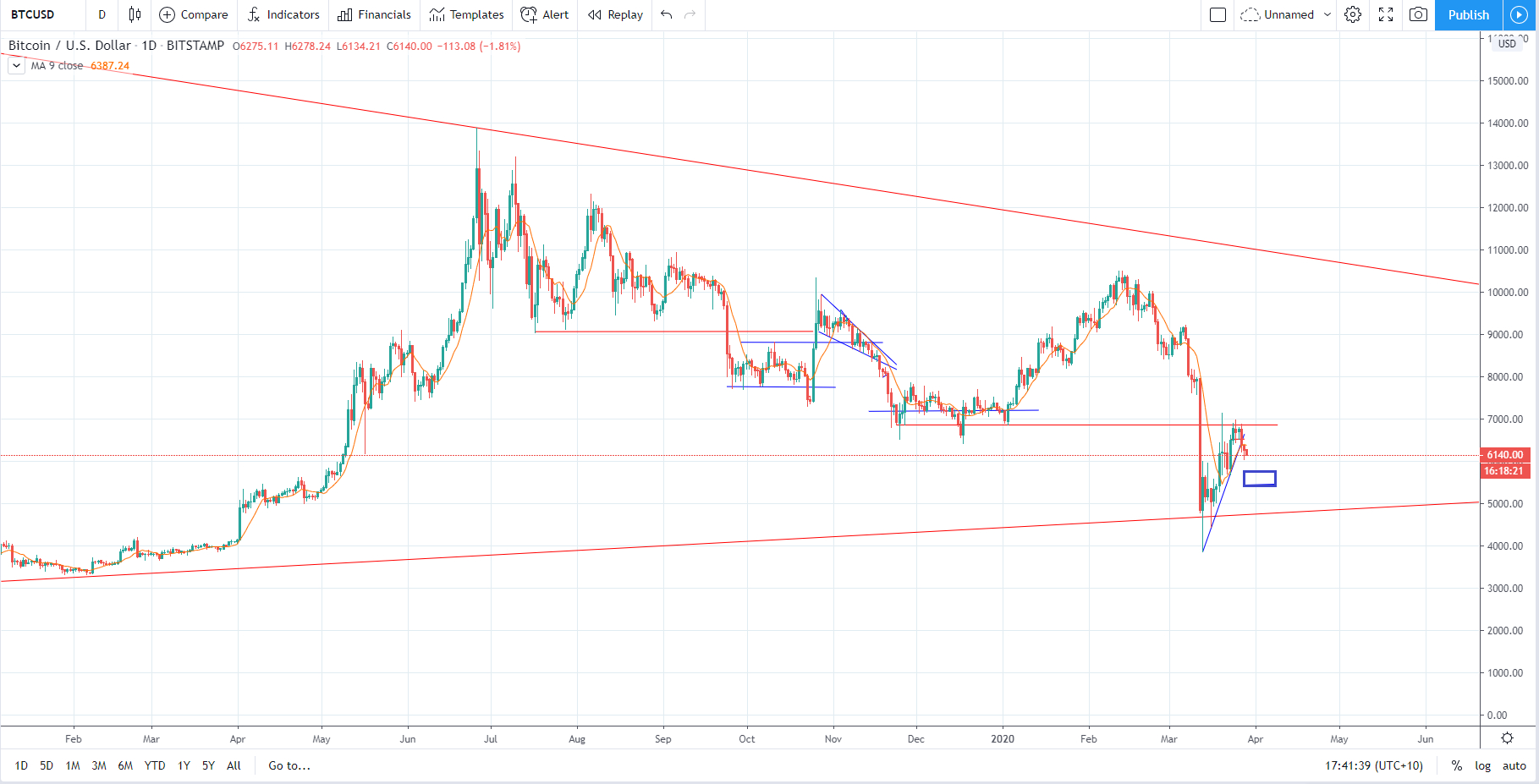 Longer-term, we think that the market will stick in this broader consolidation (low at $4800, high at ~$10,700) until institutional funds enter and push it out.

For the time-being we expect something like this — that as the market goes on a bull-run it will seem to validate the macro-narrative triggering a strong FOMO event. Gold will likely have broken through its high by then and more problems will emerge in the financial system.

So although a false-break of the range is expected, we also expect a return to the consolidation afterwards. 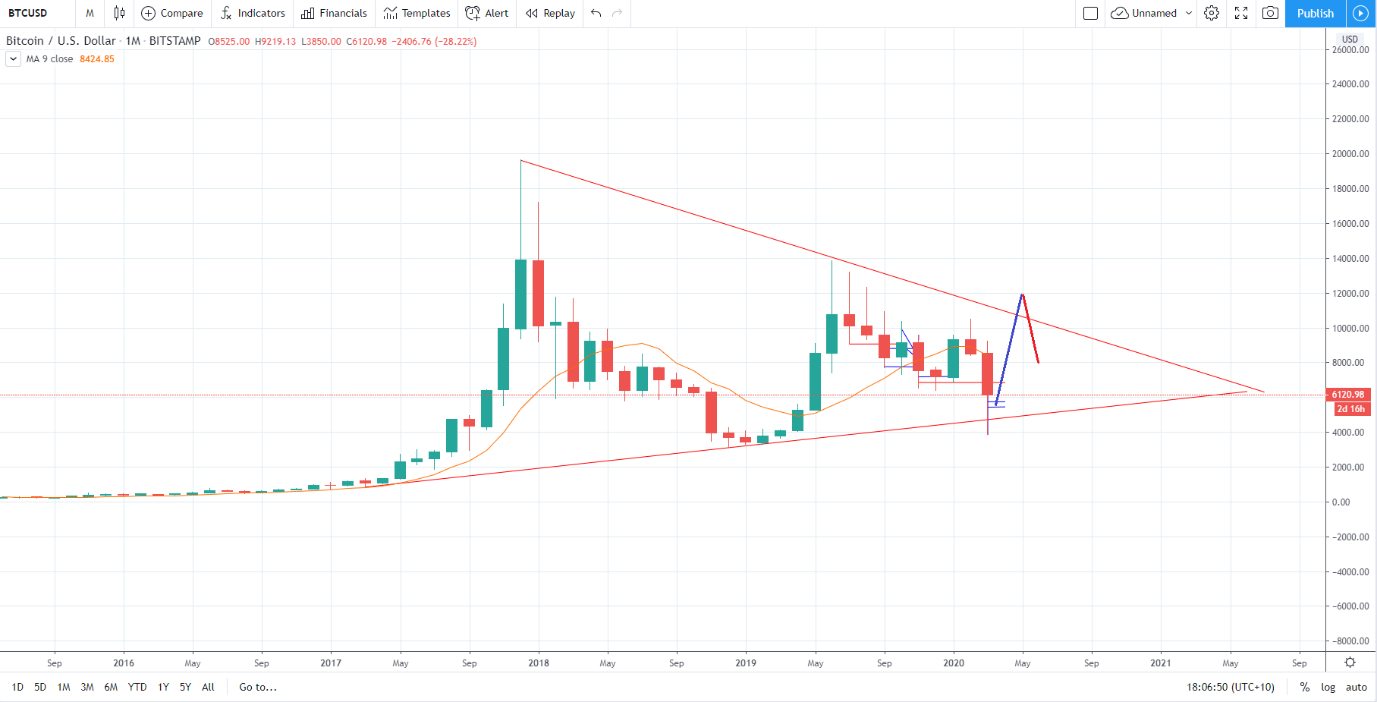 Our original thought on what would push it outside of the range for good longer term was when each Bitcoin underwrites more sophisticated financial transactions of larger values in decentralised finance and digital assets and where Bitcoin would act as the fundamental value underwriting it all.

Having said that, it will be interesting to see if increases in the Gold price or failure in the financial system is capable of changing this macro-narrative. Some mix of these factors could potentially change the nature of the asset over time.

The counter-trade to this play by play is interesting to consider as well.

If we can presume that the bear market is over, and that the market has recently been caught, held and sold heavily to push out longs but is in fact deeply bullish, then an aggressive trade led by medium to large funds could catch shorts at present prices and push them through the high, relying on FOMO and hysteria.

It’s not a bad trade either tbh. 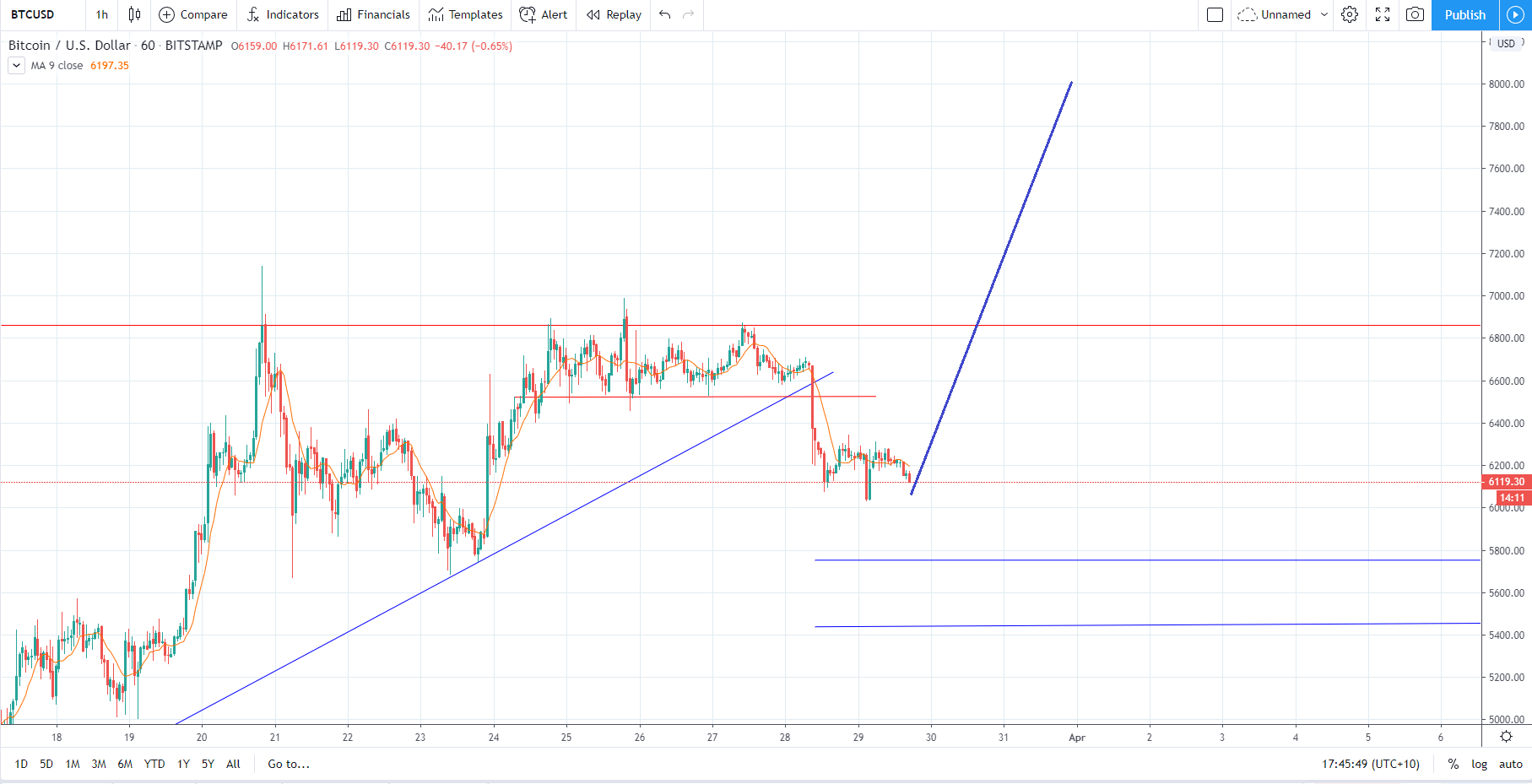 So why don’t we think that this is the trade yet?

The Bitcoin market is likely familiar with reports that Gold can’t be purchased by any retail buyers, so why isn’t Bitcoin taking a one way trip to the moon?

If the Gold market had already breached highs and traded on the other side of 1700–1800 then we might expect this kind of panic bid into Bitcoin now.

Similarly, when the Bitcoin market breaks the bearish narrative we expect some aggressive buying.

So although we think this is coming there is still a ‘valid’ bearish narrative and a final flush of longs is expected to test the market properly before the turn is recognised and realised. Although volumes are high compared to the previous month, we perceive that lowering volumes at ~6800 mean that the bullish trade had lost its steam.

But in global markets medium term a monetary value trade is coming.

A physical reality — physical gold being unavailable — is in competition with an abstract financial reality — that of paper markets being able to create direction to the broader physical/paper gold market.

In normal conditions the size (leverage) of the paper markets gives it significant control over the actual physical commodity market. We have recently seen how dynamic of spot vs paper can dramatically change in oil markets.

A disconnection between ethereal paper markets and the physical reality of exchanging goods is part of the systematic risk revealed by the Coronavirus. A short-circuit of the financial valuation process had occurred in equity markets where monetarist economics was propping up asset prices with the Fed intervention. This paper-market intervention is realising physical realities at present and fixed interest assets have similar problems.

We think that the present time is full of physical realities coming home to haunt the full set of financial markets disconnected from them and that it could continue for some time in non-government corporate bonds and other places for some time.