Achain: price analysis during the last weeks of drama 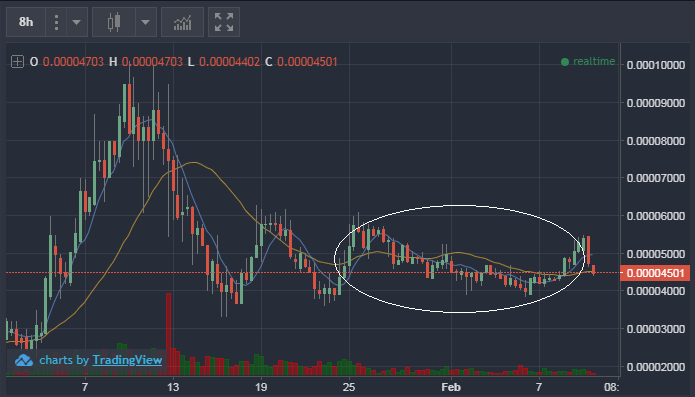 The last month was not easy for cryptocurrency lovers and traders, everything was going down and red was the color. For anyone except for Achainers that not only didn’t suffered so much but actually gained a lot more confidence and bullishness.

If we take a look at the chart of ACT of the last month what you can see is a first pump at the beggining of January caused by the ABTC fork, then the first attempt of the market to go up and then the consolidation of the price aournd 4000 satoshi this week.

If you look closely at the circled part, that is refering to the last two weeks, you can see how the price instead of going down quickly, like in the last two pumps, it went down veeeery slowly, and those were the weeks while almost every cryptocurrency was going down and people were panicking on social media and press.

This is to reiterate the goodness and the solidity of the project and of the Achainers who support this project.

Below you can take a look at the comparison of the price market between Achain and a few of its competitors: Ethereum, Neo and EOS.

The future of Achain seems bright, ACT overcomed very well this general negative period and, above all, must be taken into account that Achain is at the beginning of its path, which will be completed at the end of 2018 with the creation of the Cosmos interconnected network.

In order to arrive to that goal they need to do other forks and this will bring a lot more people in. Also a lot of other projects built upon Achain or other their partners (which continue to increase) will start their activities so Achain will gain a lot of visibility in the near future, take a look for yourself: Kcash, Acute Angle Cloud, BitcoinOS, PundiX …