30th Anniversary of the Web: My Experience From 1991 to Now 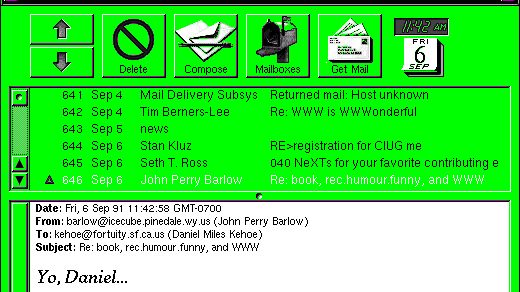 Author of the book, "Learn Ruby on Rails." Now at Yax.com, developing a website builder for all.

The web is thirty years old this month, counting from the date the first web server was launched on Christmas Day 1990. I first saw it emerge on August 6th, 1991, when the web was publicly announced. But after 30 years, I think we've lost sight of its original purpose. Here's what I mean.

In 1991 I was writing for NeXTWORLD magazine, which was a lot of fun because I got to work with, and write about, people who were doing fascinating things with computer technology. Working for NeXTWORLD led to writing the book Taking the Next Step and a short stint at Steve Jobs's NeXT as a technical writer.

The most innovative project I encountered that year was not NeXT. Rather, it was something developed by Tim Berners-Lee, a researcher at CERN, the European particle physics laboratory. He used a NeXT computer to develop a networked information system for high-energy physicists. If I hadn't been reading the comp.sys.next Usenet newsgroups carefully, I would have missed the announcement of "a hypertext editor for the NeXT."

Not many people used "WWWNeXTStepEditor version 0.12." The NeXT community was small, and many NeXT computer users did not yet have Internet access, which was required to access Tim Berners-Lee's experimental "WorldWideWeb" documents. To me, the name WorldWideWeb seemed a bit of a conceit since the only users at the time were high-energy physicists at a few research institutes.

Nonetheless, as soon as I'd installed and tried the software, I wanted to get involved. I told everyone about it, including a fellow editor at NeXTWORLD, John Perry Barlow. Barlow, a lyricist for the Grateful Dead, and co-founder of the (then-new) Electronic Frontier Foundation, wrote to his friend Mitch Kapor to say, here's "Something called World Wide Web, which sounds rather like Project Xanadu emerging from the Matrix almost without design. This could be cool."

If you don't recognize Barlow's references, Project Xanadu was a visionary hypertext project that predated the Internet. The Matrix is not the movie universe created by the Wachowski's, but rather the network of computer networks that existed before the commercialization of the Internet (as described by the researcher John Quarterman).

Subsequently, I joined the www-talk mailing list and also contacted Tim Berners-Lee directly. I wanted to know if he was interested in technology I'd heard about from friends at Adobe Systems. Adobe's editable PostScript specification (which came to be named PDF and became the basis for a product named "Acrobat") seemed to me a better match for distributed hypertext than the very-limited SGML-based "HTML tags" that Tim Berners-Lee was using. HTML offered only minimal layout and styling possibilities; PostScript was a better page description language.

Tim Berners-Lee was reluctant to publicize that code for the web was available for free, as management at CERN had not yet agreed to release it publicly (that didn't happen until April 1993). Plus, the editors at NeXTWORLD were not interested in a product that was only useful to a few NeXT users with Internet access, so I wasn't able to write about it for the magazine (too bad, as I could have been the first journalist to write about the web!).

A year later, editable PostScript was released, and in 1993, Robert Cailliau of CERN visited me in California. I arranged a meeting between Cailliau and management at Adobe Systems. He met with John Kunze of Adobe at the Stanford Linear Accelerator Center (SLAC) and demonstrated the WorldWideWeb — the first time management at Adobe had seen the web. By that time, HTML was firmly entrenched as the native language of the new web. Adobe later invested in Netscape Communications and produced an Acrobat plug-in for the Netscape web browser, establishing the basis for viewing richly formatted PDF pages in web browsers.

For some years afterward, I regretted that the Adobe/WWW meeting had not taken place the previous year - I imagined the richer PDF language might have eclipsed the sparse and limited HTML language as the primary syntax of web pages. With the adoption of the Cascading Style Sheets specification (from 1999 forward), my views changed. I've come to appreciate that the technical underpinnings of the web are optimal, reflecting both the genius of Berners-Lee's original vision and the rich contributions of the worldwide developer community.

Thirty years later, it is easy to overlook the web's origins as a tool for sharing knowledge. Key to Tim Berners-Lee's vision were open standards that reflected his belief in the Rule of Least Power, a principle that choosing the simplest and least powerful language for a given purpose allows you to do more with the data stored in that language (thus, HTML is easier for humans or machines to interpret and analyze than PostScript). Along with open standards and the Rule of Least Power, Tim Berners-Lee wanted to make it easy for anyone to publish information in the form of web pages. His first web browser, named Nexus, was both a browser and editor. The NeXTSTEP SDK made editing easy to implement; editing was abandoned in subsequent non-NeXT web browsers.

I think we've lost sight of that original vision. Facebook or Wix makes it easy to author web pages but at the cost of lock-in to proprietary systems. And when developers choose complex software such as React or Rails to build simple websites, I cringe at the violation of Rule of Least Power. I still have a "deep case of net religion" (as John Perry Barlow said in 1991), and I'm now writing about ways to build websites without frameworks and build tools (see my articles, Build Websites the Yax Way). My current open source project, Yax.com, is a do-it-yourself website builder that uses new web standards (including web components) to help people build simple sites. Thirty years on, we still have a lot of work to do to realize the web's original goals. I hope I'm not the only one who sees this.

I never anticipated that Berners-Lee's NeXT hypertext project would become a medium to supplant print and television. In 1991, during idle moments, I imagined the world's books and magazines might be reborn as hypertext (many others had imagined this earlier, including Ted Nelson, with his Xanadu project). But I never honestly believed that Berners-Lee's software project could change the world. By 1999, as web addresses appeared on billboards and the sides of buses, I started to accept that Berners-Lee naming his project "the WorldWide Web" was not vainglorious but merely prescient. Still, I hope its utility as a platform for commerce does not eclipse our original vision of the web as a means for sharing the world’s knowledge.

Related Stories
Subject Matter
20 Most Useful Git Commands 😎 by @1nj3ct0r
#git
The Exciting Journey Of Creating My First Portfolio📂🎉 by @madzadev
#web-development
C# Sorting - A Minor Error by @davidebellone
#csharp
Java Vs. PHP: What To Choose In 2021 by @omelnic
#php
Getting Your First Job As A Junior Developer: The Psychological Perspective by @shohamgilad
#hiring