Why Unveiling Fake Volume is Essential for Market Growth 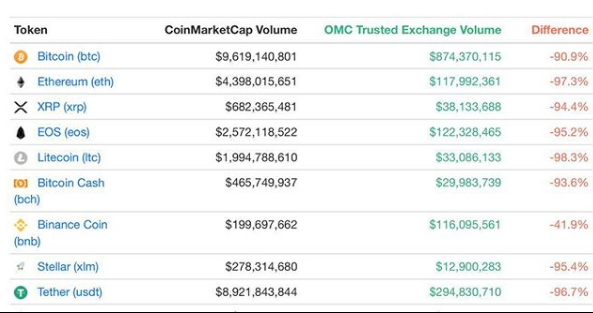 The market is under fire the last few days as the general public have finally realized that a major chunk of liquidity on exchanges does not actually exist. This has been taken as a negative for cryptocurrency growth and adoption, but I guess someone forgot to tell Bitcoin’s price action!

As a primer, Bitwise Asset Management gave a presentation to the SEC where they showed the officials how crypto volume is manipulated. While I don’t agree with their investment philosophy or financial products, Bitwise’ presentation was perfectly summed up and contained useful data that everybody needs to see.

Maybe this is being perceived incorrectly. Maybe this is actually excellent for cryptocurrencies. Most of the world sees cryptocurrency as ‘fake internet money’. That perception is likely to worsen in the short term due to reports like these — given those people are even paying attention. But what does this mean for long term developments?

A brief look into how volume was faked reveals a manipulation tactic called ‘wash trading’. Wash trading is a known evil, especially in crypto. It is when a single account or entity simultaneously issues buy and sell orders on an exchange. They sell their cryptocurrency (minor market downturn occurs) and then buy it back (at the lower price; creates a tiny surge). This volume shouldn’t be considered as it doesn’t represent real demand, supply, or trading. It is simply selling and buying back crypto at the same time in order to create the illusion of liquidity.

Transparency — Practice what you Preach

Everybody involved with blockchain or distributed technology uses the narrative of transparency and blocking corruption as their main talking points. How can we advocate transparency when our markets aren’t transparent? We should be more concerned with portraying the technology and markets for what they really are — not what we want them to be. This is likely to be a revelation for cryptocurrency trading and institutional investments. Most institutions have a tiny presence in the market but nothing meaningful. Certain institutions may use it as a neat little platform for them to manipulate liquidity and rake in some profits. But for meaningful capital inflow to Bitcoin and its peers, we need to see the market for what it really is and work toward strengthening it.

It’s very likely Goldman Sachs, Morgan Stanley, and all the other huge banks and corporations are aware of the fake liquidity in cryptocurrency. For them, the ​maturity of the market trumps technological development. They’re more interested in their return on investment than how it can fundamentally change the world. But let’s be honest, so are most cryptocurrency investors.

Up till now, the industry has unfortunately been extremely hypocritical. Crypto enthusiasts call out the banking cartel for their lack of transparency when crypto markets themselves don’t have any. Of course, when we talk of transparency, it is with regard to transactions and networks. So the added transparency to the financial market side of crypto will be a huge boost to credibility.

Rather than focusing on the present, we should look at the long term effects of this event. This revelation means the entire industry will now overcome ‘fake volume’. Now that the problem is not just known but also publicized, we will see many solutions come forward. The first of those is the analytics firm Messari. Messari has decided to release a ‘Top 10’ index that shows true volume on the top 10 exchanges. Many such solutions will emerge to give a more pragmatic view of​ the market.

Influential people like Vitalik Buterin and Jackson Palmer (amongst others) have openly spoken of the negatives of the market. Their vision is to put their time and effort into the technology as the markets are far too young. Vitalik has gone as far as to tell people to only invest a fraction of their capital in cryptocurrency and to be prepared to lose even that as the markets are hyper-volatile and anything can happen. His sentiments honestly echo the truth. A high allocation to cryptocurrency is the reason why most cryptocurrency hedge funds are failing. Inexperienced and hyperactive fund managers jump from public equities and private investment straight into cryptocurrency because they made 10x holding some Bitcoin and can explain what a blockchain does. The dynamics are far more complicated. The fundamentals of cryptocurrency are not comparable to the fundamentals of traditional investments. Bitcoin doesn’t have an operating margin, a business model that can be tweaked at your will, or potential for cost reduction. The closest thing to fundamentals in crypto boils down to two things: the news and sentiment.

The basic outcome I see is net positive. We lose some short term credibility, but we gain long term traction in the right direction. It is impossible to please everyone, so we might as well take the ethical route. This ethical route also turns out to be the best option for the future.

Why Didn’t This Come Out Sooner?

To be overly blunt, nobody cared. Yes, we knew that this was happening, but we didn’t know the extent. The volume surges that seem normal on the outside were actually wash trades. It takes a certain amount of studying volume profiles as well as buy & sell walls to understand what is normal and what is manipulated.

Most of the volatility in Bitcoin is from unsuspecting retail traders who think they’ve found their golden duck, they enter trades based on where volume is going and it zooms the opposite direction. This happens nearly every time we see Bitcoin rocket upwards (its succeeded by a large move downward). But other than speaking about the manipulation, nobody viewed this as a serious issue as long as they were able to ride the wave and lock in a significant amount of gains.

Most traders were sure $6000 was the limit to downside. This came from the ‘mining fallacy’ that stated miners wouldn’t let Bitcoin fall below a profitable level. This is completely untrue as stocks continuously fall below issued capital amounts or intrinsic value. Gold has also fallen below the cost of mining, so what makes people think Bitcoin is immune from this? If anything, it makes Bitcoin more susceptible given the rampant manipulation that everyone claims to know exists. A quick study of previous bull runs and their ensuing corrections show us more often than not, Bitcoin hits the peak of the previous bull-run. In this case, that level is around $950. You might think it’s a crazy thing to call for, but if you rule it out, you close your mind to the infinite possibilities that could occur.

Only recently people started to legitimately care about the manipulation and volume busts as they lost a fortune when Bitcoin price halved ($6000-$3000). But if a large entity like Bitwise didn’t publish a formal report, these people still wouldn’t have cared.

I often call the current banking system ‘the banking cartel’ given their close ties and interdependent actions. But in all honesty, there is a ‘whale cartel’ in Bitcoin that controls the market. This can only be overcome by achieving a high level of real liquidity and volume to shrink the amount of control these whales have in the market. I specify Bitcoin in general because we don’t know if other altcoins have the same kind of whale movement. Altcoins so far have merely tracked Bitcoin price sentiment, so it may just be a case of replication over manipulation. As Andreas Antonopolous said,​ “Bitcoin adoption is low because it’s volatile; Bitcoin volatility is high because of low adoption”. It is essentially a paradox that will require a significant growth driver. This growth driver is likely to be a force external to the Bitcoin network as we have seen in Venezuela.

Transparency is key going forward. We require more and more transparency in order to live by the doctrines we advocate. This may be a short term trough for Bitcoin, but this will help us grow organically rather than through fake volume and controlled price movements. Bitcoin is most certainly not dead. With each hack, the Bitcoin network gains more resilience. Once this feature is replicated in the market, nobody with half a brain will be able to call Bitcoin an immature market.