Why Should You Use AngularJS?: Key Features And Reasons 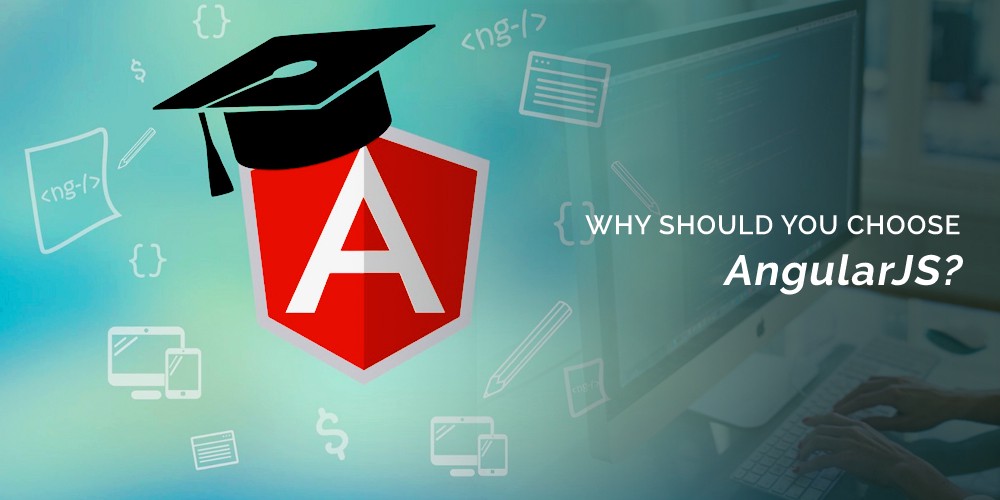 I am a digital strategist and market researcher helping businesses to grow and generate sells.

Angular is a great framework for building interactive elements and components of a website. Being in the list of popular JavaScript frameworks, It enhances efficiency and developers find it most useful for building dynamic and supporting MVC programming structure. Angular has launched the latest version which is Angular 7.0.

AngularJS utilizes the MIT license which is extremely accommodating for all the developers as well as businesses. It is being used as a part of creating exceptionally robust, scalable and flexible Single Page Applications (SPA). The SPA structure is highly poised in JavaScript and enables using HTML as a template language. It empowers developers to build client-side applications.

Why AngularJS is so popular?

By giving a wide range of functionalities, features, and benefits, AngularJS Framework has gained an amazing admiration for itself. So, these positive points have made it extremely popular for building web applications entering as a most useful service for front-end development. It is also rewarded in the list of top programming languages.

AngularJS is a superior framework by Google launched in 2009, which is created to make the front-end development procedure easier to manage. So, despite the countless plugins and frameworks obtainable in the marketplaces, website owners pick AngularJs development services because of its advanced features.

You can see here the google trends graph for the AngularJS.

Below code shows the example of the hello world tutorial in AngularJS.

You can check the code explanation and source of this code at guru99.

Data-binding saves developers from writing a substantial amount of boilerplate code. A usual web application may comprise of around 80% of its code base, out-and-out traversing, manipulating, and listening to the accessible DOM. However, data-binding assists in making this code disappear, so you can concentrate on your application.

The data-binding helps in projecting your model to the application view. This projection is flawless and occurs without any extra effort from the developers. Conventionally, when the model alters, the developer is accountable for manually manipulating the DOM components.

This is complicated as in one direction; the model changes the DOM elements. And in the other direction, DOM elements demand changes in the model. Here the developer is made responsible to interpret the interactions, merging in the model, and for renewing the view. This is an extremely burdensome procedure, which becomes tough to control, as an application becomes big in size and leads to complexities.

Here, AngularJS two-way data-binding manages the synchronization amid the DOM and the model, as well as vice versa making things easier for developers using AngularJS for development.

AngularJS slot in the essential principles behind the original MVC software design pattern into how it develops client-side web applications. AngularJS does not implement Model-View-Controller (MVC) in the conventional sense, but rather something closer to MVVM (Model-View-View Model).

The model is plainly the data in the application. A view model is an object that provides precise data and methods to maintain specific views. Further, the controller is accountable for setting a preliminary state and boosting the scope with techniques to control the behavior. The view is the HTML that subsists after AngularJS has been parsed and compiled comprising the rendered markup as well as bindings.

AngularJS has a default and built-in dependency injection subsystem that assists the developers by enabling the app simpler to build and test.

DI facilitates you to ask for your dependencies rather than do it yourself. AngularJS will detect that you require that service and offer an instance for you as a developer.

Directives are a feature of AngularJS which can be utilized to build custom HTML tags that serve as new as well as custom widgets. They can even be well used to “decorate” components and elements with required behavior as well as manipulate DOM attributes in most appealing ways.

As User Interface with AngularJS is completely structured, interpreting and manipulating the key components is extremely easy to handle. Learning markups are effortless and indicate that the declarative expression of the application UI will make better sense for the whole team.

The best facet regarding AngularJS is that it is a comprehensive solution for unfailing front-end development. The developers need not worry about the other modules and can without any strains develop data-driven web applications using JavaScript.

REST activities facilitate you to rapidly converse with your customers through the server and get the needed information to connect with required web pages. While working with AngularJS, this feature transforms into intuitive JavaScript objects, following the MVVM design which helps in structuring the source code effortlessly.

Robustness, simple usage and natural features with competence to develop new features are stuff that makes AngularJS as the finest preference across the development space.

It is power-driven with dedicated features like API Client, Filters, Animations, Routing, Content Sanitization, and Form Validation, which makes web and mobile app development swifter as well as clear-cut. It saves time and efforts having the ability to enable minor enhancements with greater ease.

Helps developers to reuse the identical chunk of code developed before. It saves efforts and time to make AngularJS an exclusive framework for the developers. This even empowers to build similar web application quickly.

It is extremely undemanding and rapid, to work with, JavaScript MVC Framework meant for front-end development. You just require adding some of the attributes to the HTML language and you are fit to build the desired application in very less time.

It smartly improves HTML and makes all the tough tasks easy to manage. It even assists to pull out the controller function, create dependency amid controller and template, and collects all the data to showcase on the screen.

Here I also want to discuss Angular 2 and Angular 4 which are open source and the versions of AngularJS.

The Angular 2 with TypeScript is the most dynamic way of developing all sizes of web applications that can run in any advanced web browser and on mobile platforms.

After the release of Angular 2, the subsequent big update for Angular is now accessible in the form of Angular 4. However the Angular 7.0 available for the developers. Its advanced functionalities include:

Functions obligatory for animations are up which until now were offered as part of the angular core module, entailing that these parts of the code were always incorporated in applications. This scenario happened even if the functions did not get used in applications without animations. To keep away from creating such bundles with redundant large sizes — this function has been put into the Angular 4 package.

It’s fairly a recurrent thing to use “conditional rendering” in templates to showcase information depending on similar conditions. This is done by the use of *ngIf. If a scenario doesn’t match, the equivalent components and all the child elements are not supplemented to the DOM-tree.

However, this situation creates readability and maintainability issues related to the code. As developers need to work on multiple lines of code when employing changes. In Angular 4, this scenario is resolved with a newly added “else”. By using the else-case the place of the element is marked with *ngIf in an individually referenced template fragment which solves the issue.

Angular CLI is the command line tool that assists developers in developing and testing their Angular projects happily. In combination with Angular 4, Angular CLI version 1.0.0 was launched which is now a key element for different Angular-based projects.

As a business, you can be confident of quicker progress, winning new clientele, and maturing rapidly by applying AngularJS while building front-end application development. You can hire best AngularJS developers for that.

AngularJS is a highly promising and significant JavaScript framework gripped by AngularJS Development Services to build a highly proficient and instinctive web as well as mobile applications.

Choosing the spot-on AngularJS development services provider will assist you to get customized applications and provide assurance for swifter business progress.

Google backs angular and supports it with a massive open community, you can rest assured that its every feature will be increasingly improved with time for superior performances.

You can even remain assured of customary features updates and release of fresh, innovative functionalities in the periodic time intervals during this year.

I hope the above explanation helps you to aware about why to implement AngularJS in your front end development project. If you have any query you can ask me in the comment.