6 Reasons Why Nobody Will Talk About Bitcoin This Holiday Season [feat. OK Boomer reference] 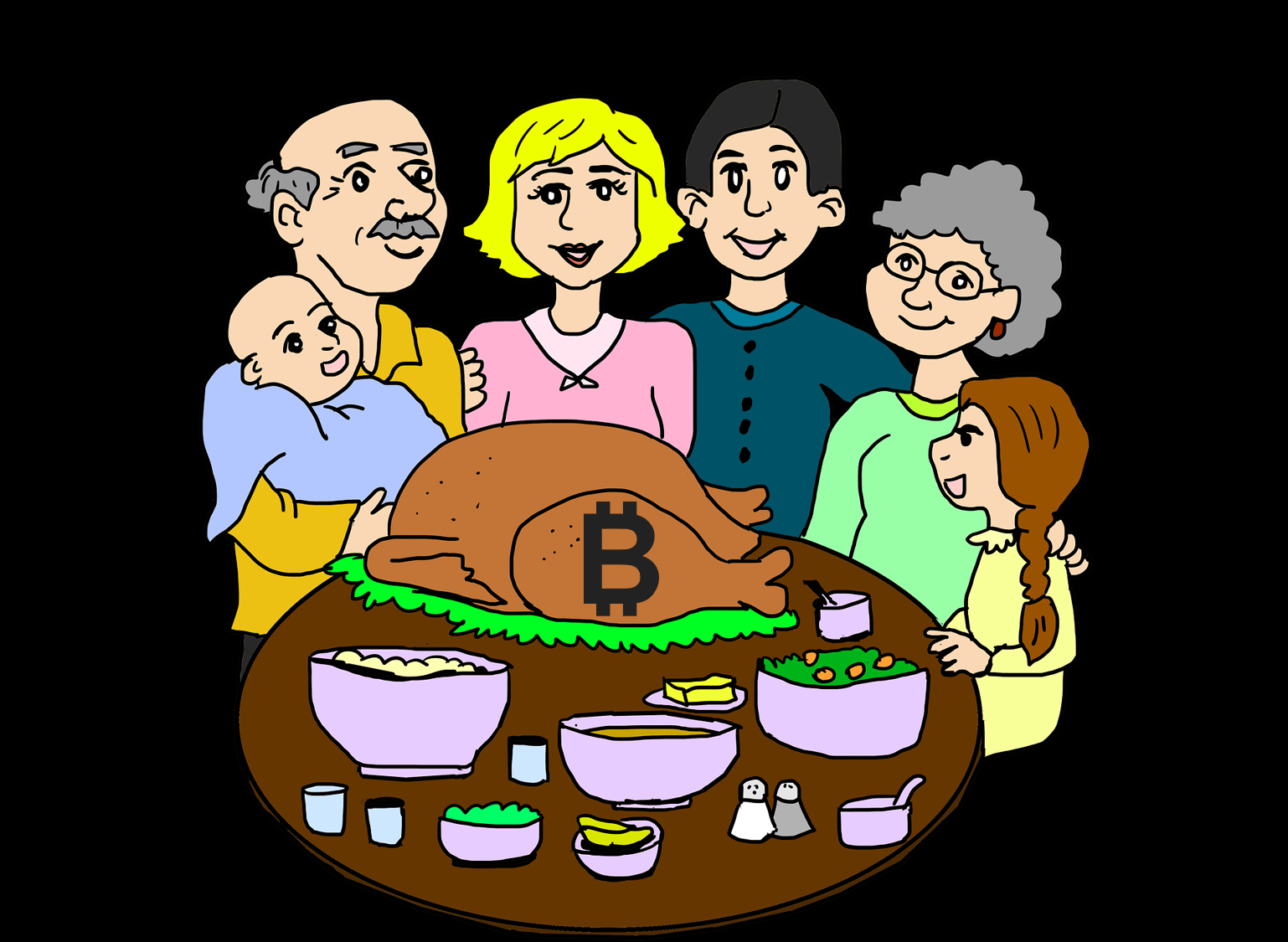 As a conversation topic, that is.

Did you see today’s price drop?

Even Stephen Colbert proclaimed on live TV he doesn’t want to hear about it, ever.

Worse, nobody asks me whether they should buy it anymore.

With the holidays coming up, you may get an urge to chat about bitcoin. After all, the price is higher today than in November 2017, when everybody started talking about it in the first place.

Sure, go ahead and strike up a convo. Just know your audience—and why they might run away once you start speaking.

Why doesn’t anybody want to talk about bitcoin anymore?

I have some perspective on this question.

While I’ve never asked anybody “why don’t you want to talk about bitcoin” (because it’s an odd question), I do talk to people about bitcoin sometimes when discussing my book, Consensusland.

Also, I spend 95 percent of my time with people who have no connection to the cryptocurrency industry and have mostly no knowledge of blockchain. While I’m connected to the cryptosphere, I’m slightly detached from the “bitcoin solves this” and “price go up” crowd.

As best I can tell, different people have different reasons to not care about bitcoin.

It seems like they fall into four groups: normal people, 2017-ers, tech professionals, and skeptics.

Take what I say below with a grain of salt. It’s based solely on my observations and reflections.

Who are “normal people?”

They’re the +90 percent of people who have never owned bitcoin.

At best, bitcoin is an amusing novelty. Everybody knows somebody who’s into it, and they mostly assume that person made money from bitcoin. They’ve probably heard about bitcoin crimes, but they don’t follow the price or technology.

And that’s it, that’s all they know. Questions you might hear:

2017-ers prefer to leave the past behind

These people never had a clue what was going on but they bought a little bitcoin in 2017 because “everybody” was doing it and they heard you could make some money. Most have a tiny amount of bitcoin in a Coinbase account.

“That was fun while it lasted.”

Now, they’re waiting for the price to go back up so they can sell it.

You and I know that once the price gets back to all-time highs, few 2017-ers will sell.

Most will continue to hold it and may even buy more, simply because they think the price will keep going up and “everybody” says it will.

They don’t talk about bitcoin because their experience with bitcoin was terrible. They’d rather forget about it—unless, of course, bitcoin goes parabolic again.

At that point, you will have to brace yourself for a text every two hours about “price is up!” and asking you what you think about X shitcoin or giving you recommendations about what pump-and-dump to buy into, just like they did to me at the end of 2017.

A lot of IT professionals understand distributed ledger technology and the computer science behind it. While some of them get really excited about bitcoin, most seem skeptical.

Bitcoin’s technology is not novel or interesting to them. It’s actually quite old and well-established.

They mostly get the practical value but do not believe bitcoin, or any technology built on blockchain, can scale to the point that it could be used for anything other than very niche uses (some of which are quite esoteric).

As one friend said about bitcoin, “all the technology existed for a while, they just combined it into a money system.”

Some of them think bitcoin’s shady because criminals use it. Others think it’s a complicated way to do something quite easy (send money). A few think it’s a fad or useless technology.

You may hear them say this:

“Only criminals use it, everybody else is just trying to make money.”“It’s too volatile.”“I already have a banking app, why do I need bitcoin?”“It will never work.”

Unlike tech pros, skeptics mostly don’t understand the technology, but they understand business and finance. At least they think they do.

They have legitimate criticisms. E.g., bitcoin’s too slow for commercial usage, too volatile as a currency, and too risky for a store of value.

While some acknowledge the value of a public ledger, they’d mostly tell you a database can do the same thing better. (Not because they know the difference, but because some guy said so two years ago.)

They will change their minds if bitcoin does something useful for them. As a city manager once told me, “call me when bitcoin can help people pay their parking tickets.”

That hasn’t happened yet.

Fortunately, we have many, many people working to make bitcoin better. If they succeed, the skeptics will come around.

Until then, no sense trying to engage these people.

While I hate stereotypes, I will admit the “OK, Boomer” meme applies to bitcoin, at least based on my conversations and reactions to my book.

People my age or younger may not quite understand bitcoin, but after they read my book, they mostly get why it’s a big deal.

Older people mostly don’t get it at all.

You may think they’re dismissive—and in one sense, they are. But consider their perspective.

Most still use checkbooks and some use cash exclusively. Some shop online, but mostly not. A few still print out their emails. They’ve used the same currency their whole life and many believe it’s backed by gold or some other guarantee.

Of course bitcoin makes no sense to them. You can expect they’ll miss the most mind-blowing feature of cryptocurrency, as well as every other interesting aspect of the technology.

Go easy on the older folk. Think about how you’d feel if the situation was reversed?

Imagine if your boss made you compose a memo on an electronic typewriter and send it via telex.

Then, a client asks you to work up a sales report using a handheld calculator and notepad so you can sketch a chart on transparent film to present it using an overhead projector.

Do you even know what that means? How quickly would you pick it up? How convenient would you think it is?

Yet this was modern technology when they grew up.

We grew up with computers and internet, so bitcoin doesn’t seem so hard for us. And even we struggle with the technology. Why do you think so many people tweet and fuss about the need for more training, easier apps, and better user experience for bitcoin and bitcoin-related services?

Many, many people think education is the key to engagement. I see this written on twitter, blogs, reddit, and all sorts of forums.

Over the past month or two, I have reached out to some friends and acquaintances within the cryptocurrency community, as well as several relatively influential people who graciously responded to my contact.

When I asked them about positive, constructive conversations they’ve had with no-coiners, almost none of their best conversations seemed educational.

To the contrary, many of their best conversations did not get into blockchain technology, financial liberty, or problems with our current financial system.

In the next few months, I will post a few articles about these types of conversations. It may surprise you how much our biggest, loudest voices and boldest, clearest messages fall flat—and how the simplest interactions hold far more power than the greatest marketing slogans.

Stay tuned for that.

Meanwhile, enjoy your holidays catching up with friends, family, and loved ones. Bitcoin will always be here but your friends and family might not.

Relax and enjoy the ride!

Mark Helfman is a top writer on Medium and Quora for cryptocurrency, finance, and bitcoin topics. His book, Consensusland, explores the social, cultural, and business challenges of a fictional country that runs on cryptocurrency. In a past life, he worked for U.S. House Speaker Nancy Pelosi.

Work Smarter, Not Harder: 7 Powerful Tips To Manage Your Projects B...