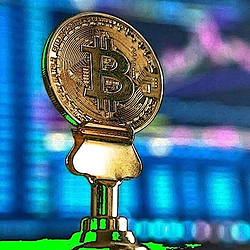 Imagine you are the ruler of a small country. All residents of your country use the barter system to trade goods and services. Now you find barter to be a cumbersome process because of the following reasons:
● Double Coincidence of Wants — if citizen A wants to buy cloth, but produces wheat, then A needs to find someone who is doing the exact opposite. This need to find a corresponding party is called double coincidence of wants. This is undesirable to you as a ruler because it slows down trade.
● Proof of Goods — unless A carries his bags of wheat to the marketplace, he will not be able to sell them in exchange for bales of cloth. This is also undesirable as it creates unnecessary cluttering of the marketplace and impedes trade as well.

If only there was a token that would serve the purpose of exhibiting a particular value.
Luckily, you are the ruler and you decree that you will be issuing “coins” of various sizes denoting different values.
Now, A can buy cloth by simply paying using coins of the corresponding value. But the question arises, how do you go about distributing coins to your subjects.
You strike upon the idea of asking your subjects to dig canals for you, in exchange for which, you will give them coins. Once a sufficient number of coins have reached the people, they start going back to their earlier professions and using the coins to trade. You can even give them a few coins to help them begin trading.

The hows and whys of implementing a token within an ecosystem such that people can use it to exchange goods and services in that ecosystem comprise are called ‘tokenomics’.
Coming to the crypto-universe, tokens are the ‘coins’ of the ecosystem. Each company that builds a Blockchain-based product also build a token that can be used to facilitate transactions within the boundaries of their ecosystem.
What is a Good Token
Building the token in a manner that it incentivizes its use by people is as critical a factor as conducting the ICO itself. Apart from that, several other factors, as enumerated below also need to be implemented squarely to achieve the objective of developing an ecosystem around the usage of the token.

● has Utility within the Ecosystem
● Resists Inflationary Pressures
● Is Scalable/Denominational
● Is A Store of Value
● Is Fungible
● Is Acceptable to the People at Large
● Is Traded on an Exchange
● Must Incentivize its Use
So how do we go about building a token for our ICO?
Why Overthinking Might not be Such a Bad Thing
The first step to building a token is finding out the transaction which will be facilitated by the exchange of tokens. If, for example, we are building a video streaming solution, we have two options. We can either tokenize the login structure, where the user pays tokens to log into the platform, or we can tokenize the usage, where the user pays tokens to watch content.
Now, tokenizing the login structure might seem like the easy way out, but it disincentivizes uploaders who gain more interaction than other uploaders. Therefore, in this case, tokenizing the usage is the apt way to go.

Secondly, since a token represents the total value of the ecosystem, it is advisable to keep a certain proportion of the tokens aside for functions such as upkeep of the system, legal fees, and for paying the advisors of the platform.
This requires a delicate balancing as if you keep aside too many tokens, there might not be enough left to help build a thriving ecosystem. This can be understood by means of an example from the real world.

Thirdly, these tokens are basically a string of characters which are easier to replicate than re-printing a currency note. Thus, if the developers of the token do not keep a concretely defined upper limit on the number of tokens that will be brought into existence, they will be faced with the dilemma of inflation eating away the value of the tokens with the passage of time.

A hard cap on the number of tokens also serves the purpose of nudging up the value of the token as usage picks up.

Fourthly, there are multiple stakeholders in getting a token off the ground, and they all need to be incentivized. At all given levels, the aim is toincentivize transactions and not hoarding of the tokens. Since tokenomics is based on a perpetual deflationary cycle, tokens run the risk of being hoarded by people who are expectant of its value to appreciate.

When hoarded in large numbers, these tokens become unavailable for transactions and the economy breaks down.

When a token is listed on multiple exchanges, it acts as a signal to people that the token is valued at its fair market price and is not being managed as a dirty float.

Given the general lack of regulatory standards in the crypto-space, the community itself has come up with several self-imposed standards based on a rigorous trial and error mechanism. What worked for one company might not work for all, as one-size-fits-all is something that is what the crypto-space has fought against, in general. This means that these standards are more like guidelines that have been tried and tested with positive results most of the time.

● Total cap at 100 million tokens — It has been seen that keeping the number of tokens too high can add inflationary pressure while keeping them too low adds a deflationary pressure. While the idea is to keep the economy slightly deflationary, any more than what is sufficient starts to incentivize hoarding instead of transaction. We want the token to be implemented in such a way that it is preferable for a general user to use these tokens instead of holding and speculating on them.
● Reserving 15–20% of the tokens for the founders — Since the founders did all the hard work is creating token and implementing it, it is fair that they are awarded a portion of these tokens as sweat equity. It also serves another less-talked-about purpose. It sends a message across the board that the founders. When the founders reserve a portion of the tokens for themselves, they tie their fortunes to the performance of the token in the market. This instills confidence in the user that the founders will continue to work on the project beyond the ICO. Moreover, the tokens reserved for the founders are also not allowed to be sold before the end of 2–5 years from the date of the ICO.
● Reserving 5% of the tokens for legal fees etc. — The crypto-space is largely unregulated in most jurisdictions. This means that the legislative oversight is on the way and it is best to lawyer up and maintain as much legal clarity as possible. It also acts as a confidence-building mechanism for the general users who are assured of legal backing of the project that they are investing in.
● Reserving 10–15% for the platform’s upkeep — All developers are faced with the dilemma of choosing between a minimum viable product and aiming for perfection in one go. Hence, all products, not just in the crypto-space, require constant maintenance activities and regular upgrades. It also requires timely bug-fixes and patches which may put the user in harm’s way.
● Reserving 5% for the Bounty programs — Despite building the best of products, it is the marketing that drives the sales and consumer engagement. The wider the outreach, wider is the audience. Therefore, bounty programs are designed to award stakes to media influencers in exchange for retweeting about the product, reviewing the product on major publications such as BitcoinTalk, and even translating the whitepaper into different languages. Bounty programs also serve as a source of awarding tokens to stakeholders, just like the king asking his subjects to dig canals in our depicted example.
● The 50–60% tokens up for tokensales are sold in batches instead of one go — This is the most important segment of any tokenomics. The aim here is to raise capital through various institutions and individuals. Having more investors with lesser token holding is preferable to having lesser investors with larger token holdings. This is because higher volumes of trade is a vital sign of token health. To this effect, the tokensales are staggered into smaller chunks. There is a private sales chunk, where the token is offered to only pre-vetted investors. Another chunk is the pre-sales component, where the token is offered at a discounted price to entice more investors. Finally, the actual tokensales (or ICO in certain jurisdictions) takes place, and that too is broken down into smaller manageable chunks staggered over a period of one month.
● Prefer to make an ERC20 token — ‘ERC’ stands for “Ethereum Request for Comments”. This is an official protocol for proposing improvements to the Ethereum network. ‘20’ is the unique proposal ID number. ERC20 is basically a protocol that denotes that the token is compatible to be exchanged on Ethereum. Following the ERC20 structure allows a token to be unique as well as being standardized.
Designing the tokenomics of the token hinge on the trifecta of usage, usability, and value. It is the prerogative of the token developer how he/she distributes the utility between these three components. While one can accord precedence to one aspect of the trifecta at the cost of the other, it should be strictly business knowledge and experience that guides the allocation