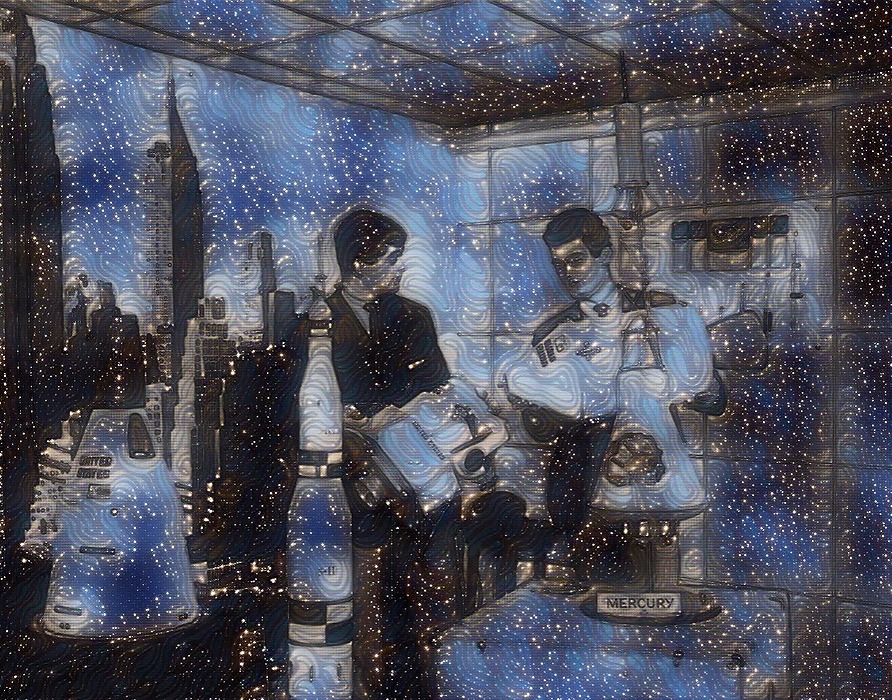 Organic processor, working for our mother, the machine.

No fancy intros in this one. This is an expression (not opinion) article in order to calibrate some of my thought processes in real-time.

"I don't believe in good or evil, but rather in necessary, and that is the only possible outcome whatsoever".

Life's own heartbeat is powered by unpredictable ups and downs

If you use an oscilloscope to measure an organic heartbeat, the origin of the frequency of life representing the unit the heart belongs to, you will notice that the visual wave has a series of ups and downs in order to generate the pulse required for the preservation of the species it serves in each respective scenario.

In case the visual wave is linear, whether that's flat, angled upwards or downwards, the organic unit the heart was supposed to keep alive is most likely incapable of efficient functionality as in diseased.

Similar to a heartbeat, unmeasurable cosmic events are in constant vibration in order to preserve what we refer to as real life. These events on their own turn affect what appear to be measurable aspects of life, and regardless of our egocentric beliefs, these aspects are by nature required to be in contrast, if we want to talk about them, not to mention conceive them in the first place, considering how our organic processors operate.

Therefore, what we label as war, a negative occurrence of the natural domino is not only unavoidable but it is precisely necessary for life itself, at least as necessary as positive events, otherwise, we would end up with a linear progression which again, leads to a solid-state where things don't actually matter.

Labeling Hitler, or Gengis Khan (or however you spell his name) as evil and malicious actors, is the same as labeling Jesus a sacred and good-intentioned actor. There is practically no difference at all as both sides are equally necessary and cannot be split between good and bad labeling.

If it wasn't Hitler it would be someone else we would gladly blame, cause that's what we do by nature. If it was not a man to start with, then it would be a meteor crash, a solar flare, a Noah's ark situation or whatever we would point at with our negative finger.

It which moves is only necessary, and that is the only thing that ever happened, happens now that we point at it and have a word for it, and will keep happening when we will not.

You can analogize the above with the terms climate change, vegan, and gay among other labels of the big movement to realize how arrogant and intellectually narrow human units truly are.

For example, no matter how much capital is spent promoting climate change-focusing Unicef-like NGOs, the real fact is that whatever happens is not a universal flaw. It is a natural occurrence, and simply because it doesn't benefit specifically mankind, we called it out and try to make a big deal out of it. Guess what: nature doesn't really care.

The deeper root of this context is based on sound as a physical phenomenon and its science, more specifically frequencies whether audible or not or the big movement itself.

When thinking about modern economic systems, what comes in mind is an old maze game called "snake" - one that 90s generation organic processors will easily recall via the memory that holds Nokia's telecommunication device: model 3310 (and later 3330).

Similar to the popular back in the day snake game, the global economy is an unstoppable force that changes locations, hands, vaults, and wallets until A. it reaches a point where the snake is so fed the only option is to hit the pre-fixed barrier. B. Disregarding its level of growth, the greedy snake on its own rush to grow even larger, eats its own tail, resulting in a similar outcome to A.

Nevertheless, economic models are meant to crash, no matter how well crafted they appear to be to the naked eye. It is a natural outcome that ascends from basic mathematical principles of addition.

In child's terms: an empty glass will eventually reach fulfillment whether you pur water in it by force or by unpredictable cosmic events (eg. rain). Yet after it's filled, the glass will either break, or start to spill the water it cannot contain under its premisses, meaning it fails to fulfill its role as a predesigned system.

Money is an algorithmic agent that will grant privileges to those deemed necessary by the big movement itself. It cannot be acquired by 'hard work', luck (eg. lottery), inheritance, or as a means of gift and be maintained over what nature has already claimed.

If you are the specific bee who's job is to interact directly with the honey produced by the hive, then you'll get the honey regardless of what you, queen bee, or other hornets might think of it.

Luckily for us, bees have already mastered advanced intel exchange protocols and therefore they are not bound by egoistic behaviors such as the ones subjecting mankind in a plaguing fashion.

I've seen people inherit millions and then pass away from a bee sting right next month, and people who accommodated their physical existence under a bridge for a couple of decades before they suddenly got into the billionaires' club.

If you want to set your ego clear when it comes to manmade economics, grab on Warren Buffet's interpretation that goes something like this: Money is a mechanism that distributes power from the impatient to the patient.

Why Universal Basic Income (UBI) Is Not An Optimized Option

Any form of universal basic income (UBI) failed at the stage of theory due to the extreme lack of creational incentive. Give free ready-to-eat bananas to any monkey for a consecutive period and the subject will certainly forget to walk given time.

If you're skilled with any machine-oriented programming language, you can easily run a simulation of a social construct based on any given form of UBI and you'll see that it eventually fails, and it does so not even that far in the simulative example.

Interactive large-scale organic societies are built upon evolutionary-biological incentives and the concept of value, money, or some sort of a reward system is the invisible carrot that keeps the donkey going.

Male and female species are two naturally unequal operative models. Calling upon gender bias, discrimination and using terms such as feminism, is unacceptably unprogressive and against the universal laws of life itself.

Google's decision to exclude male and female attributions to avoid gender bias in its artificial intelligence programs is condemned to generate a dumb AI, that literally cannot tell the basic difference between a male and a female unit whether the subject would be a man, an octopus or a bee.

Natural balance is not a 50/50 scenario but more of a 100/0, or 0/100 scenarios as expressed by quantum mechanics. A 50/50 scenario indicates an unnaturally balanced state that resembles solidarity unfound in the natural matrix. In simpler terms, the 50/50 'zen-master-like' balance is a chased fantasy that could be never achieved under the current fluid, ever-moving circumstances.

In our current state, we can always move things around, manipulate possible outcomes of physical and digital reality, and create securely unpredictable scenarios of life, until we choose our last resort of action: not to be.

If we chose solid balance, or not to be prior to our current condition, we would not be able to choose all the above as the ability to experience anything than none has been lifted.

Concluding, inequality is the equator of life as we know it, and battling against it, will only speed up the process that leads to choosing the so far unchosen. So, I guess the lesson here is: before convincing yourself that you are a vegan gay trans climate change activist UNICEF Santa helper Greta supporter, take into consideration the only undeniable solid fact about natural evolution giving zero (0) rats' asses.

Related Stories
Subject Matter
Gene-Modified Babies: Essentials of the Bioethics Subjecting 'Designer-Babies' for Future Parents by @RossPeili
#biotech
VPNs for Netflix: Benefits and Must-Have Features by @clearvpn
#vpn
How To Build and Deploy an NLP Model with FastAPI: Part 2 by @davisdavid
#natural-language-processing
Pitfalls Of Court Hearings On Zoom by @TheMarkup
#zoom
"Connect, Analyze and Learn from Data" - Dr. Yu Xu by @shahmeer
#founder-interview
How to Find The Stinky Parts of Your Code [Part XI] by @mcsee
#refactoring