The main innovation in Java 9 was the introduction of modules. There was a lot of talk about this feature, the release date was postponed several times to finish everything properly. Today we’ll talk about the mechanism of modules, and what benefits Java 9 brought in general. The post is based on the report of Sergei Malkevich, IntexSoft Java developer.

To implement the modules in this version of Java, a whole new project was allocated — Project Jigsaw — which includes several JEPs and JSRs.

For those who like the official documentation, here you can learn more about each JEP.

Project Jigsaw started back in 2005: first, JSR 277 was released, and then in 2008 the actual work on the project began. It was released only in 2017. So it took almost 10 years to finish the Java modules in a proper way. Which, in fact, emphasizes the full scale of work and changes that were made during the implementation of modules.

Prior to version 9, JDK and JRE were monolithic. Their size grew with each release. Java 8 already occupied hundreds of Mb, and the developers had to “carry all this stuff” each time in order to run Java applications. Only rt.jar alone takes about 60 Mb. Well, here we can also add a slow start and high memory consumption. So, Java 9 can help here.

JDK 9 introduced the module system, namely, the JDK was divided into 73 modules. And each new version brings us a higher amount of these modules. In the 11 version, this number is close to 100. This separation allows developers to create the Jlink tool to create custom JRE that will include only those modules the application really needs. Thus, a simple application and some custom JRE with a minimal (or a small) set of modules can eventually fit in 20 Mb, which is good news.

With Java 9, the JDK structure has changed: now it is identical to the JRE structure. If earlier the JDK included the JRE folder with bin and duplicate files, now everything looks as follows: 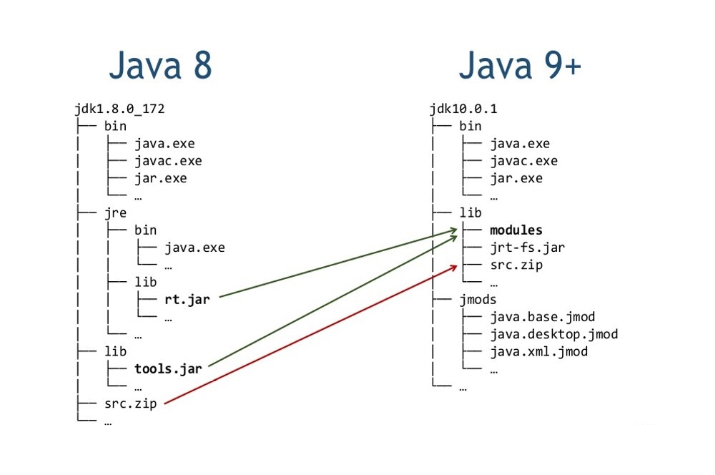 What is a module, actually? A module is a new level of packages and resources aggregation, or as developers say:

...a uniquely named, reusable group of related packages, as well as resources and a module descriptor.

keyword, followed by the name of the package, which depends on another  package and is transitively dependent on other packages.

Let’s take a closer look at the keywords:

In this case, we specify the interface of the service used.

First we put the interface —

, and after  — the implementation.

A little more about services

Thus, the returned Iterator contains a list of implementations of the

interface. In fact, it will contain all the implementations found in the modules on .

Why services were introduced at all? They are needed to show how our code will be used. So it’s all about a semantic role. Also, modularity is about encapsulation and security, as we can make the implementation

One more option of using services is a rather simple implementation of plugins. We can implement the plugin interface for our application and connect modules to work with them.

Let’s go back to declarations

Before Java 9 it was possible to use reflection to access almost everything, and we could do whatever we want. But as already mentioned, version 9 allows us to protect our app from “illegal” reflection access.

We can allow full reflection access to the module by declaring

Or, we can expose specific packages with

It is also possible to use

With modules, a new concept appeared — module-path. In fact, this is the classpath we all know, but for modules. 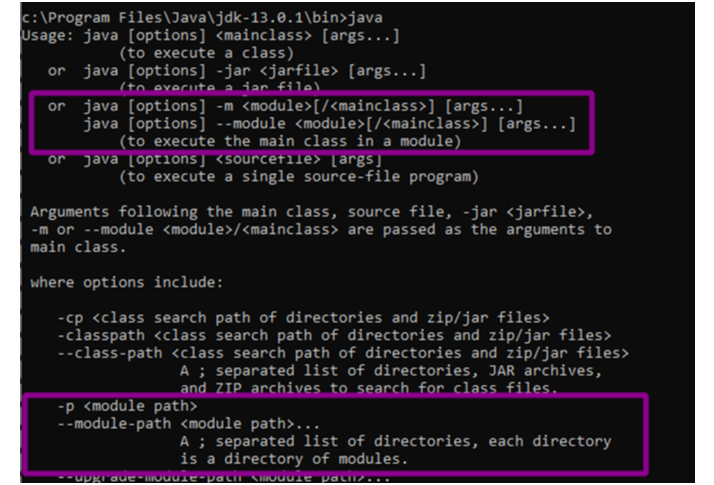 In a “classic mode”, we specify options and the full path to the main class. If we want to work with modules, we also specify

or  parameter, which indicates that we will run modules. That is, we automatically put our application in a “modular mode”. Then, we specify the module name and the path to the main class from the module.

Also, in addition to classic

and  parameters we are used to working with, we add new  and  parameters, which indicate the paths to the modules used in the app.

It often happens that developers do not switch to Java 9+ because they believe they will have to work with modules. Although in fact, we can run our applications without adding a parameter for modules and use only other new features of Java 9.

What is Jar Hell in a nutshell? 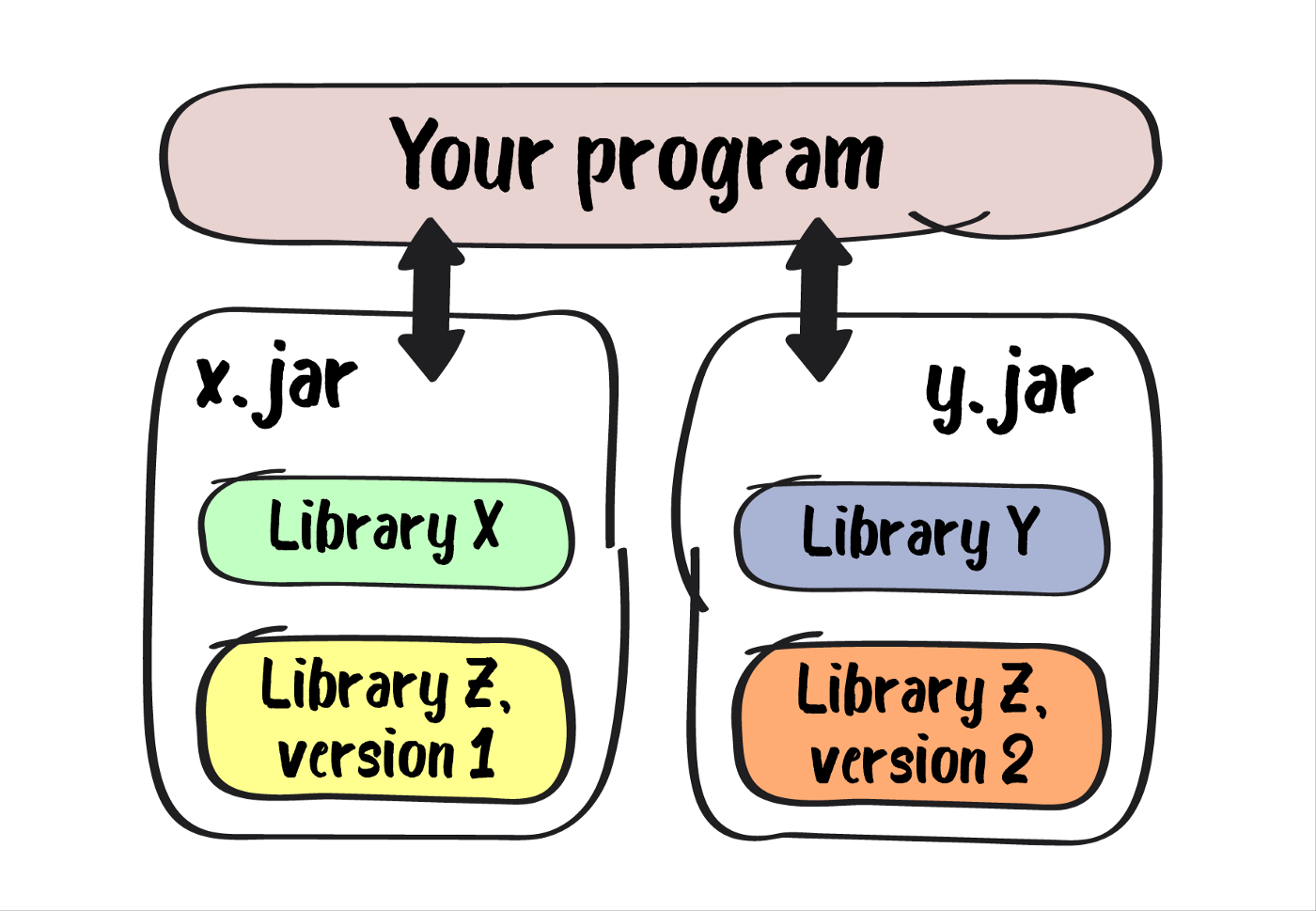 It’s okay if version 2 is backward compatible with version 1, we’ll have no problem then. But if not, obviously, we’ll have a versions conflict, which means the same library cannot be loaded into memory by the same class loader.

How do developers get over such situations? There are standard methods that developers have been using since the very first Java, for example: exclude, or plugins for Maven, which rename the root packages of the library. Or sometimes developers are looking for different versions of Library X to find a compatible option.

In fact, the very first Jigsaw prototypes supposed the module might have a version and allowed different versions to be downloaded by different ClassLoaders. Later that idea was removed. As a result, the “silver bullet” many of us were waiting for did not work out.

But still, the developers secured us from such problems right out of the box. In Java 9, Split Packages are forbidden. These are the packages divided into several modules. That is, if we have the

in one module, we cannot use it in another module within the same app.

If we run the application with modules containing the same packages, we’ll simply crash. This small improvement eliminates the possibility of unpredictable behavior connected with Split Packages downloading.

In addition to the modules themselves, there is a Jigsaw Layers mechanism, which also helps to cope with the Jar Hell.

A Jigsaw layer can be defined as some local module system. Here it is worth noting that the Split packages mentioned above are prohibited only within one Jigsaw layer. Modules with the same packages have a place to be, but they must belong to different layers. 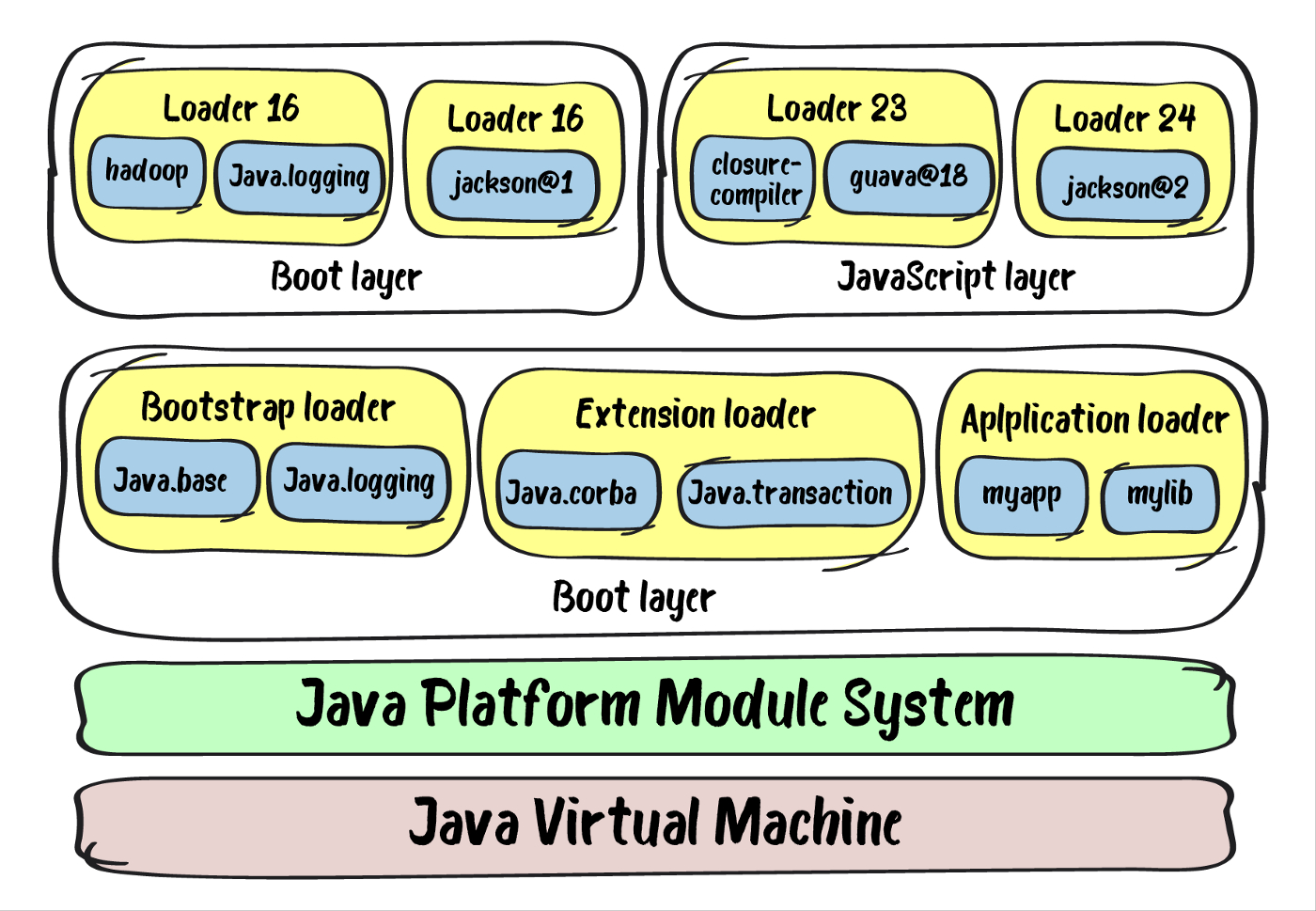 We can create our own layers anytime and “put” modules of different versions there without any problems.

Here is a detailed presentation by Nikita Lipsky to learn more about the subject: Escaping The Jar Hell With Jigsaw Layers

The modules from Java 9 open up new possibilities for us, while the support for libraries today is quite limited. Of course, people run Spring, Spring Boot, and so on. But most libraries have not switched to the full use of modules. Apparently, that’s why all these changes were met rather skeptically by the tech community. Modules provide us with new opportunities, but the demand issue remains open.